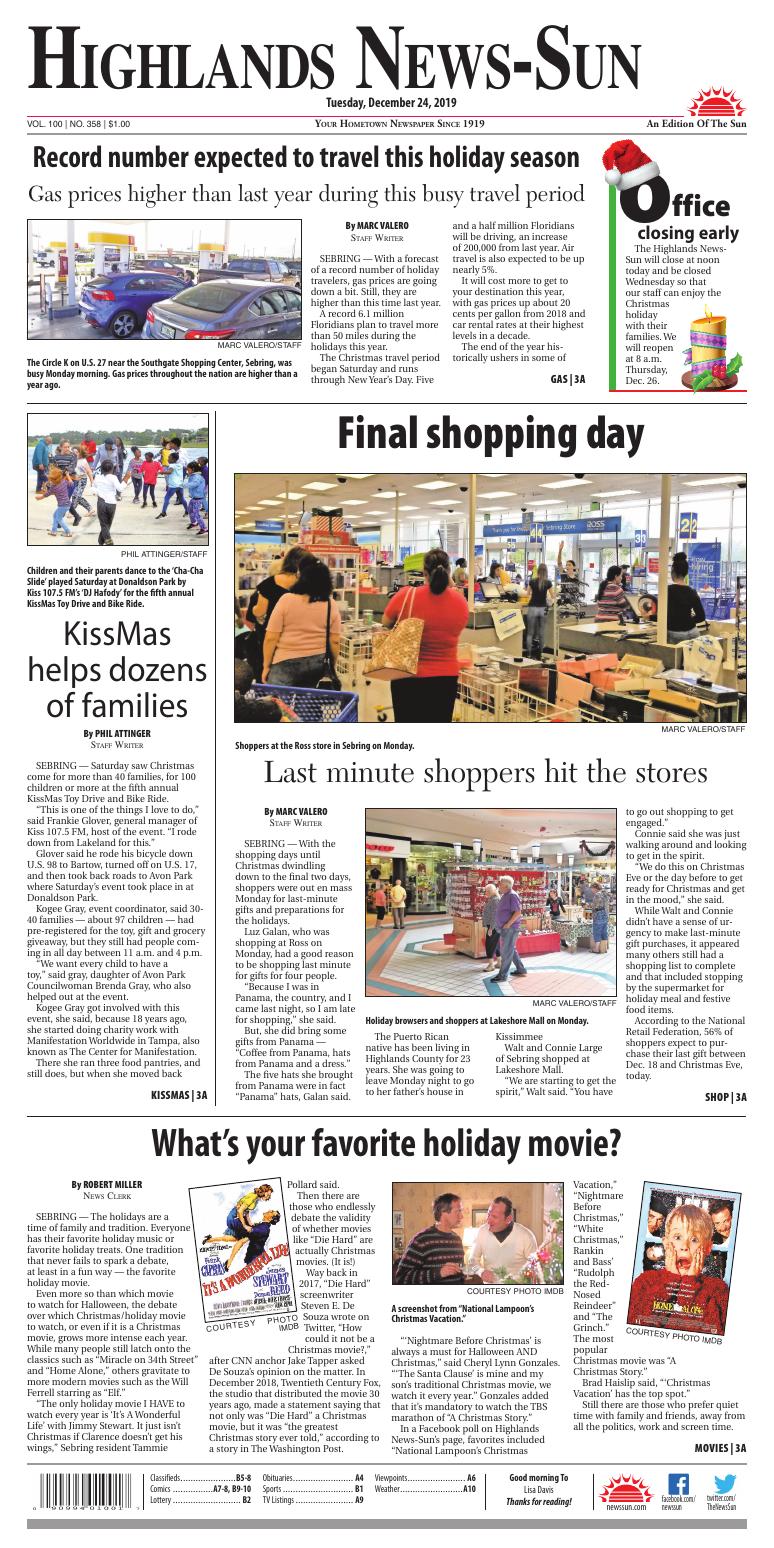 The Circle K on U.S. 27 near the Southgate Shopping Center, Sebring, was busy Monday morning. Gas prices throughout the nation are higher than a year ago.

SEBRING — With a forecast of a record number of holiday travelers, gas prices are going down a bit. Still, they are higher than this time last year.

A record 6.1 million Floridians plan to travel more than 50 miles during the holidays this year.

The Christmas travel period began Saturday and runs through New Year’s Day. Five and a half million Floridians will be driving, an increase of 200,000 from last year. Air travel is also expected to be up nearly 5%.

It will cost more to get to your destination this year, with gas prices up about 20 cents per gallon from 2018 and car rental rates at their highest levels in a decade.

The end of the year historically ushers in some of the cheapest gas prices of the year, according to a recent report from AAA. This was true in 2018 when the national gas price average was recorded at $2.26 on Dec. 31, 2018.

However, the national gas price average won’t go that low this month. AAA forecasts that gas prices will edge lower with the national average falling between $2.40-$2.45, which will be 15-20 cents more than last December.

According to gasbuddy.com, a gallon of regular in Sebring on Monday was around $2.45. This time last year an Avon Park station had the lowest price in the county at $2.06.

More Americans than ever on record – 115.6 million – will travel this holiday season, from Saturday, Dec. 21 through Wednesday, Jan. 1, according to AAA. That is the most in nearly 20 years since AAA began tracking in 2000, and represents an increase of 3.9% over last year, or 4.3 million more people packing up their sleighs for a holiday getaway.

More than 104 million of those holiday travelers will drive to their destinations and, INRIX, a global transportation analytics company, expects delays to be the worst on Thursday, Dec. 26, with afternoon delays reaching nearly double congestion-free drive times in major U.S. cities.

“Holiday cheer is at an all-time high this year, with unemployment at historically low levels, and noted improvements in both disposable income and household net worth,” said Paula Twidale, vice president, AAA Travel.

Holiday browsers and shoppers at Lakeshore Mall on Monday.

Shoppers at the Ross store in Sebring on Monday.

The rush for last-minute gifts was evident Monday at Ross in Sebring.

SEBRING — With the shopping days until Christmas dwindling down to the final two days, shoppers were out en mass Monday for last-minute gifts and preparations for the holidays.

Luz Galan, who was shopping at Ross on Monday, had a good reason to be shopping last minute for gifts for four people.

“Because I was in Panama, the country, and I came last night, so I am late for shopping,” she said.

The five hats she brought from Panama were in fact “Panama” hats, Galan said.

The Puerto Rican native has been living in Highlands County for 23 years. She was going to leave Monday night to go to her father’s house in Kissimmee

Walt and Connie Large of Sebring shopped at Lakeshore Mall.

“We are starting to get the spirit,” Walt said. “You have to go out shopping to get engaged.”

Connie said she was just walking around and looking to get in the spirit.

“We do this on Christmas Eve or the day before to get ready for Christmas and get in the mood,” she said.

While Walt and Connie didn’t have a sense of urgency to make last-minute gift purchases, it appeared many others still had a shopping list to complete and that included stopping by the supermarket for holiday meal and festive food items.

According to the National Retail Federation, 56% of shoppers expect to purchase their last gift between Dec. 18 and Christmas Eve, today.

The NRF expected holiday retail sales during November and December to increase between 3.8% and 4.2% over 2018 to a total of between $727.9 billion and $730.7 billion. The numbers, which exclude automobile dealers, gasoline stations and restaurants, compare with an average holiday sales increase of 3.7% over the previous five years.

“The U.S. economy is continuing to grow and consumer spending is still the primary engine behind that growth,” said NRF President and CEO Matthew Shay.

Every year the debate rages over what is the best Christmas or holiday movie to watch during the winter holidays. Non-traditional movies such as “Die Hard” have become talking points and new holiday favorites.

Even more so than which movie to watch for Halloween, the debate over which Christmas/holiday movie to watch, or even if it is a Christmas movie, grows more intense each year. While many people still latch onto the classics such as “Miracle on 34th Street” and “Home Alone,” others gravitate to more modern movies such as the Will Ferrell starring as “Elf.”

“The only holiday movie I HAVE to watch every year is ‘It’s A Wonderful Life’ with Jimmy Stewart. It just isn’t Christmas if Clarence doesn’t get his wings,” Sebring resident Tammie Pollard said.

Then there are those who endlessly debate the validity of whether movies like “Die Hard” are actually Christmas movies. (It is!)

Way back in 2017, “Die Hard” screenwriter Steven E. De Souza wrote on Twitter, “How could it not be a Christmas movie?,” after CNN anchor Jake Tapper asked De Souza’s opinion on the matter. In December 2018, Twentieth Century Fox, the studio that distributed the movie 30 years ago, made a statement saying that not only was “Die Hard” a Christmas movie, but it was “the greatest Christmas story ever told,” according to a story in The Washington Post.

“‘Nightmare Before Christmas’ is always a must for Halloween AND Christmas,” said Cheryl Lynn Gonzales. “‘The Santa Clause’ is mine and my son’s traditional Christmas movie, we watch it every year.” Gonzales added that it’s mandatory to watch the TBS marathon of “A Christmas Story.”

In a Facebook poll on Highlands News-Sun’s page, favorites included “National Lampoon’s Christmas Vacation,” “Nightmare Before Christmas,” “White Christmas,” Rankin and Bass’ “Rudolph the Red-Nosed Reindeer” and “The Grinch.” The most popular Christmas movie was “A Christmas Story.”

Still there are those who prefer quiet time with family and friends, away from all the politics, work and screen time. “Spending time with family, not TV, so none of the listed movies,” Michelle Pasquino wrote.

So, as you settle in this Christmas to take time off from work and make plans with the family, it’s perfectly OK to turn on “Die Hard” because the internet said so.

Children and their parents dance to the ‘Cha-Cha Slide’ played Saturday at Donaldson Park by Kiss 107.5 FM’s ‘DJ Hafody’ for the fifth annual KissMas Toy Drive and Bike Ride.

Front to back, Annette Davis, Faith Glenn and Mary Daniels make sure every plate got filled and no one went hungry at Saturday’s fifth annual KissMas Toy Drive and Bike Ride at Donaldson Park in Avon Park.

At right, Shathasha ‘Jazzy’ Whigham, DJ for Kiss 107.5 FM, helps arrange toys and other gifts along with several other volunteers at Saturday’s fifth annual KissMas Toy Drive and Bike Ride at Donaldson Park in Avon Park.

SEBRING — Saturday saw Christmas come for more than 40 families, for 100 children or more at the fifth annual KissMas Toy Drive and Bike Ride.

“This is one of the things I love to do,” said Frankie Glover, general manager of Kiss 107.5 FM, host of the event. “I rode down from Lakeland for this.”

Glover said he rode his bicycle down U.S. 98 to Bartow, turned off on U.S. 17, and then took back roads to Avon Park where Saturday’s event took place in at Donaldson Park.

Kogee Gray, event coordinator, said 30-40 families — about 97 children — had pre-registered for the toy, gift and grocery giveaway, but they still had people coming in all day between 11 a.m. and 4 p.m.

“We want every child to have a toy,” said gray, daughter of Avon Park Councilwoman Brenda Gray, who also helped out at the event.

Kogee Gray got involved with this event, she said, because 18 years ago, she started doing charity work with Manifestation Worldwide in Tampa, also known as The Center for Manifestation.

There she ran three food pantries, and still does, but when she moved back to Avon Park five years ago, she saw a need and helped start the Southside Community Resource Center at 1013 S. Delaney Ave.

That’s she ended up working at Kiss 107.5 FM and got involved in the annual KissMas Giveaway.

“It’s been my mother’s motto ever since I was a child: ‘Always give back,’” Kogee Gray said.

She said Glover, the local NAACP and the Highlands County Sheriff’s Office each asked her to put them in touch with two families in need.

Shathasha “Jazzy” Whigham, one of the Kiss 107 DJs, said the event started at the radio station offices, but with more people coming every year, they took it to Donaldson Park and make it a community party with barbecue, a live radio remote and dancing on the concrete pad between the two main pavilions.

Annette Davis Faith Glenn and Mary Daniels made sure every plate got filled and no one went hungry, despite having to fight stiff breezes that threatened to blow away the napkins.

“Every year we’re trying to do [it] bigger and better,” Whigham said. “We want to help as many people as we can.”

Anne Marie Feeney, known a local “event guru,” has also joined the staff at Kiss 107.5 as office manager, and spent much of the event either helping to organize things on site or running out the back way in her Ford Expedition to get whatever was needed.

“Next year, we want to have twice as many bikes,” she said, gesturing to the two to three dozen already lined up to give out.

She said the Sheriff’s Office, Battle of the Bands event and Dragonfly Entertainment all came through with toys this year, along with all other sponsors.

One arrived at noon: Local chiropractor Dr. Tamika Sims and her daughter Christin Morton, who unloaded a bicycle and large stuffed animal from her SUV, with help from both Glover and L.C. “Night Rider” Baker, another DJ.

The need is there, Kogee Gray said. They are always looking for more sponsors to join the one who helped out this year and help every year.

The Highlands News-Sun will close at noon today and be closed Wednesday so that our staff can enjoy the Christmas holiday with their families. We will reopen at 8 a.m. Thursday, Dec. 26. 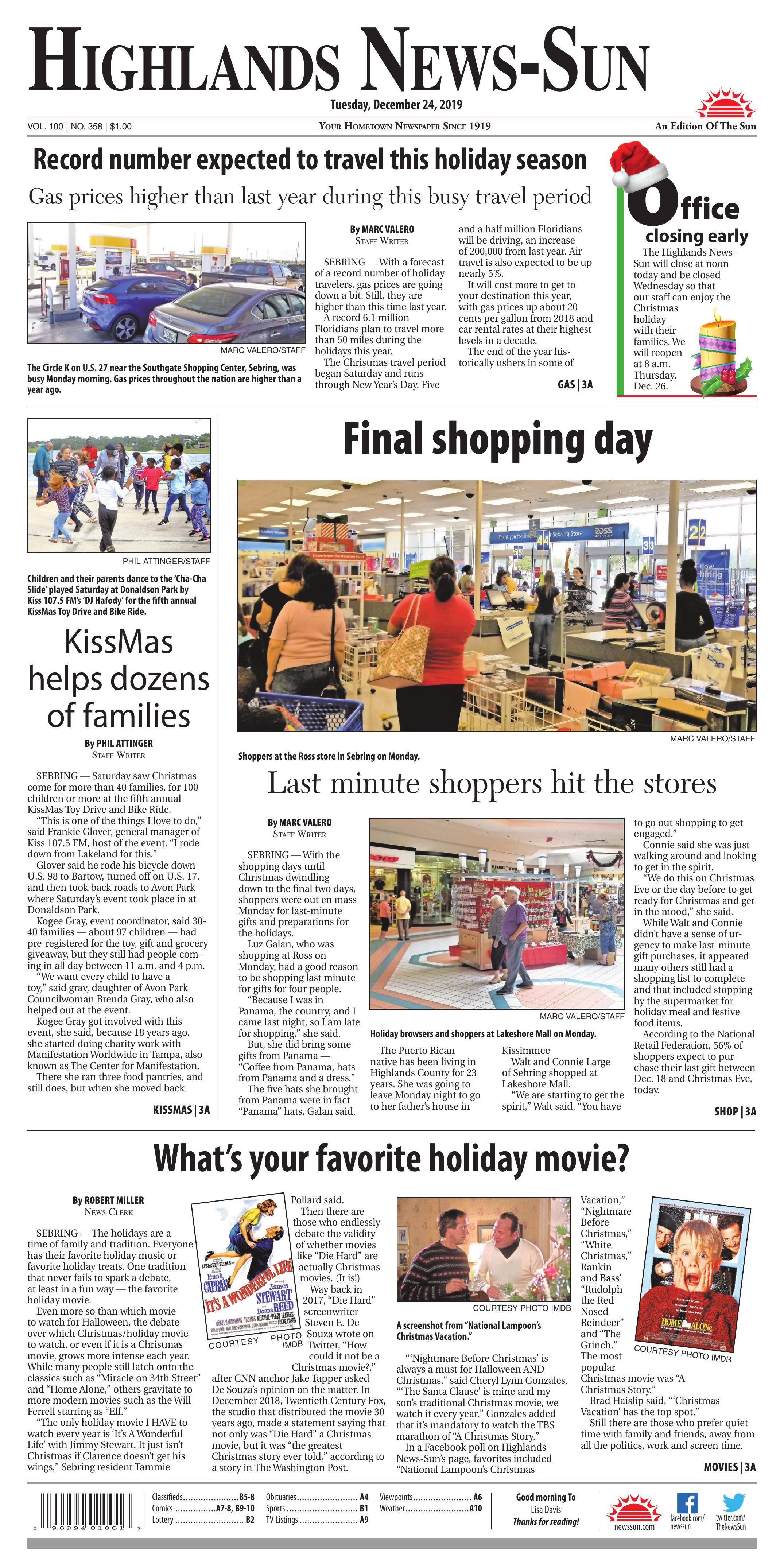