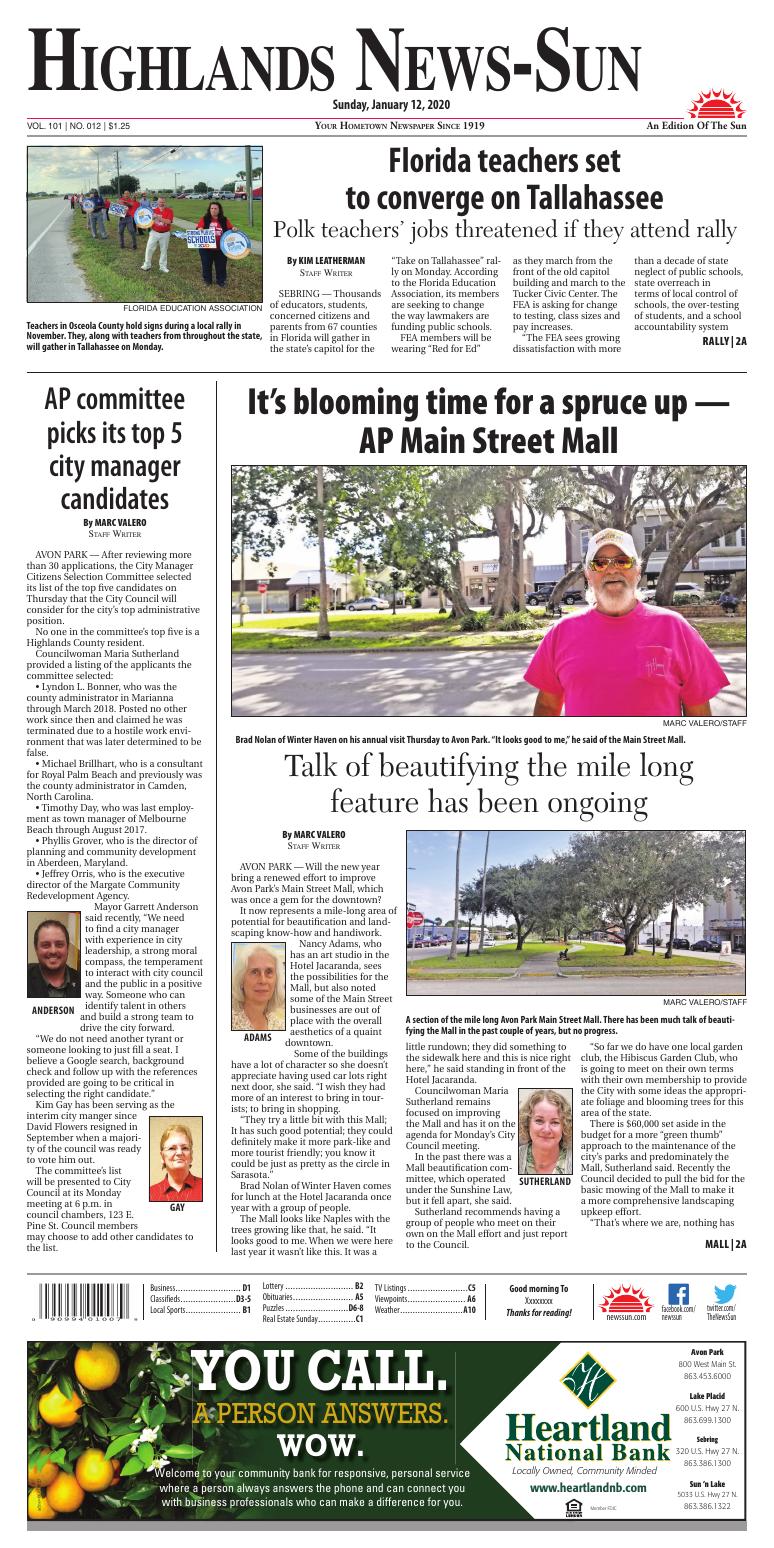 Teachers in Osceola County hold signs during a local rally in November. They, along with teachers from throughout the state, will gather in Tallahassee on Monday.

Teachers in Osceola County wave to passing motorists in November. Florida teachers will hold a rally in Tallahassee on Monday.

SEBRING — Thousands of educators, students, concerned citizens and parents from 67 counties in Florida will gather in the state’s capitol for the “Take on Tallahassee” rally on Monday. According to the Florida Education Association, its members are seeking to change the way lawmakers are funding public schools.

FEA members will be wearing “Red for Ed” as they march from the front of the old capitol building and march to the Tucker Civic Center. The FEA is asking for change to testing, class sizes and pay increases.

“The FEA sees growing dissatisfaction with more than a decade of state neglect of public schools, state overreach in terms of local control of schools, the over-testing of students, and a school accountability system that punishes poverty and whole communities,” said a FEA press release on Oct. 28, 2019.

However, in the Polk County School District, jobs, possibly as many as 1,600 of them, are at risk for those teachers taking a personal day to attend the rally. Some have even gone as far as calling attendance of the event “a strike.” General Counsel for the Florida Department of Education Matthew Mears sent an email out Friday night to teachers telling them up to 1,600 Polk County teachers could be fired and fined $20,000 as well.

“As the Department of Education, we have highest obligation to ensure that Polk County educators are advised of the risks associated with participating in a coordinated effort to not report for duty,” Mears said in the email.

School Board of Highlands County Deputy Superintendent Andrew Lethbridge explained the need for balance on personal days and teachers in the classroom.

“We know that attendance is vitally important for not only the student but also the teacher for academic achievement to occur,” Lethbridge said. “That being said, teachers do have allocated personal days that they can use through a leave process. If too many teachers request leave at the same time, all requests may not be approved for any specific date but that does not seem to be the case for this event.”

The Highlands County Education Association is in support of FEA’s Take on Tallahassee rally. Some of its members will be going to the rally according to their social media page. They have made signs demanding lawmakers appropriately fund public schools. The HCEA was not immediately available for comments on Saturday at press time.

Brad Nolan of Winter Haven on his annual visit Thursday to Avon Park. “It looks good to me,” he said of the Main Street Mall.

A section of the mile long Avon Park Main Street Mall. There has been much talk of beautifying the Mall in the past couple of years, but no progress.

Two couples cut across the Mall to the Hotel Jacaranda

AVON PARK — Will the new year bring a renewed effort to improve Avon Park’s Main Street Mall, which was once a gem for the downtown?

It now represents a mile-long area of potential for beautification and landscaping know-how and handiwork.

Nancy Adams, who has an art studio in the Hotel Jacaranda, sees the possibilities for the Mall, but also noted some of the Main Street businesses are out of place with the overall aesthetics of a quaint downtown.

Some of the buildings have a lot of character so she doesn’t appreciate having used car lots right next door, she said. “I wish they had more of an interest to bring in tourists; to bring in shopping.

“They try a little bit with this Mall; It has such good potential; they could definitely make it more park-like and more tourist friendly; you know it could be just as pretty as the circle in Sarasota.”

Brad Nolan of Winter Haven comes for lunch at the Hotel Jacaranda once year with a group of people.

The Mall looks like Naples with the trees growing like that, he said. “It looks good to me. When we were here last year it wasn’t like this. It was a little rundown; they did something to the sidewalk here and this is nice right here,” he said standing in front of the Hotel Jacaranda.

Councilwoman Maria Sutherland remains focused on improving the Mall and has it on the agenda for Monday’s City Council meeting.

In the past there was a Mall beautification committee, which operated under the Sunshine Law, but it fell apart, she said.

Sutherland recommends having a group of people who meet on their own on the Mall effort and just report to the Council.

“So far we do have one local garden club, the Hibiscus Garden Club, who is going to meet on their own terms with their own membership to provide the City with some ideas the appropriate foliage and blooming trees for this area of the state.

There is $60,000 set aside in the budget for a more “green thumb” approach to the maintenance of the city’s parks and predominately the Mall, Sutherland said. Recently the Council decided to pull the bid for the basic mowing of the Mall to make it a more comprehensive landscaping upkeep effort.

“That’s where we are, nothing has been done,” she said. “Whether we end up hiring somebody, a landscape architect or someone with forestry qualifications that know the right tree for the right place and all of that. We just need to do something to make it beautiful.”

The Mall used to have more than 1,000 varieties of blooming shrubs and trees and she believes they are down to about 50, Sutherland said. Things have died due to cold weather and it is just time to change some of the landscaping out there.

“It is our calling card; it is the first thing you see when you come down the Mall,” she said. “If we can’t maintain our Mall then how do we expect our businesses to maintain their facades and make improvements to their buildings when we are not doing it ourselves.”

Infrastructure Director Ronnie Jones said the bid for the Mall mowing and landscaping has been put on hold to get more information.

There has also been discussion on whether or not to add additional personnel to take care of it in house so it seems like it has been sitting in limbo, he said.

The Mall is a mile long with multiple planting areas making it a large responsibility to take care of and keep it maintained the way it needs to be done, Jones said.

“It gets a lot of interaction with the public everyday so you can have it picture perfect today and overnight there could be some trash or somebody run over a sprinkler or a large truck can run over and crush a curb — anything can happen,” he said.

AVON PARK — After reviewing more than 30 applications, the City Manager Citizens Selection Committee selected its list of the top five candidates on Thursday that the City Council will consider for the city’s top administrative position.

No one in the committee’s top five is a Highlands County resident.

Councilwoman Maria Sutherland provided a listing of the applicants the committee selected:

• Lyndon L. Bonner, who was the county administrator in Marianna through March 2018. Posted no other work since then and claimed he was terminated due to a hostile work environment that was later determined to be false.

• Michael Brillhart, who is a consultant for Royal Palm Beach and previously was the county administrator in Camden, North Carolina.

• Timothy Day, who was last employment as town manager of Melbourne Beach through August 2017.

• Phyllis Grover, who is the director of planning and community development in Aberdeen, Maryland.

• Jeffrey Orris, who is the executive director of the Margate Community Redevelopment Agency.

Mayor Garrett Anderson said recently, “We need to find a city manager with experience in city leadership, a strong moral compass, the temperament to interact with city council and the public in a positive way. Someone who can identify talent in others and build a strong team to drive the city forward.

“We do not need another tyrant or someone looking to just fill a seat. I believe a Google search, background check and follow up with the references provided are going to be critical in selecting the right candidate.”

Kim Gay has been serving as the interim city manger since David Flowers resigned in September when a majority of the council was ready to vote him out.

The committee’s list will be presented to City Council at its Monday meeting at 6 p.m. in council chambers, 123 E. Pine St. Council members may choose to add other candidates to the list. 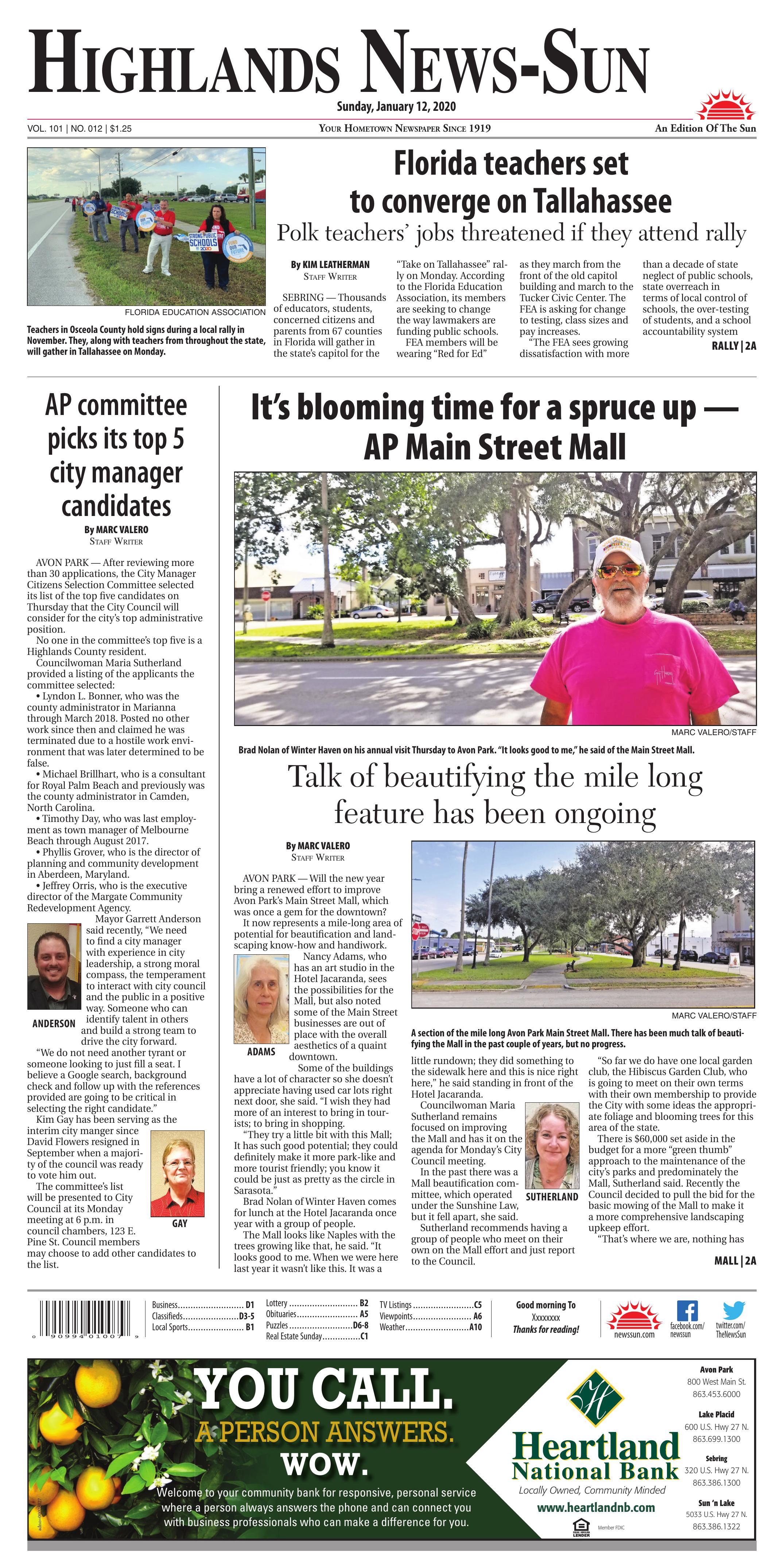