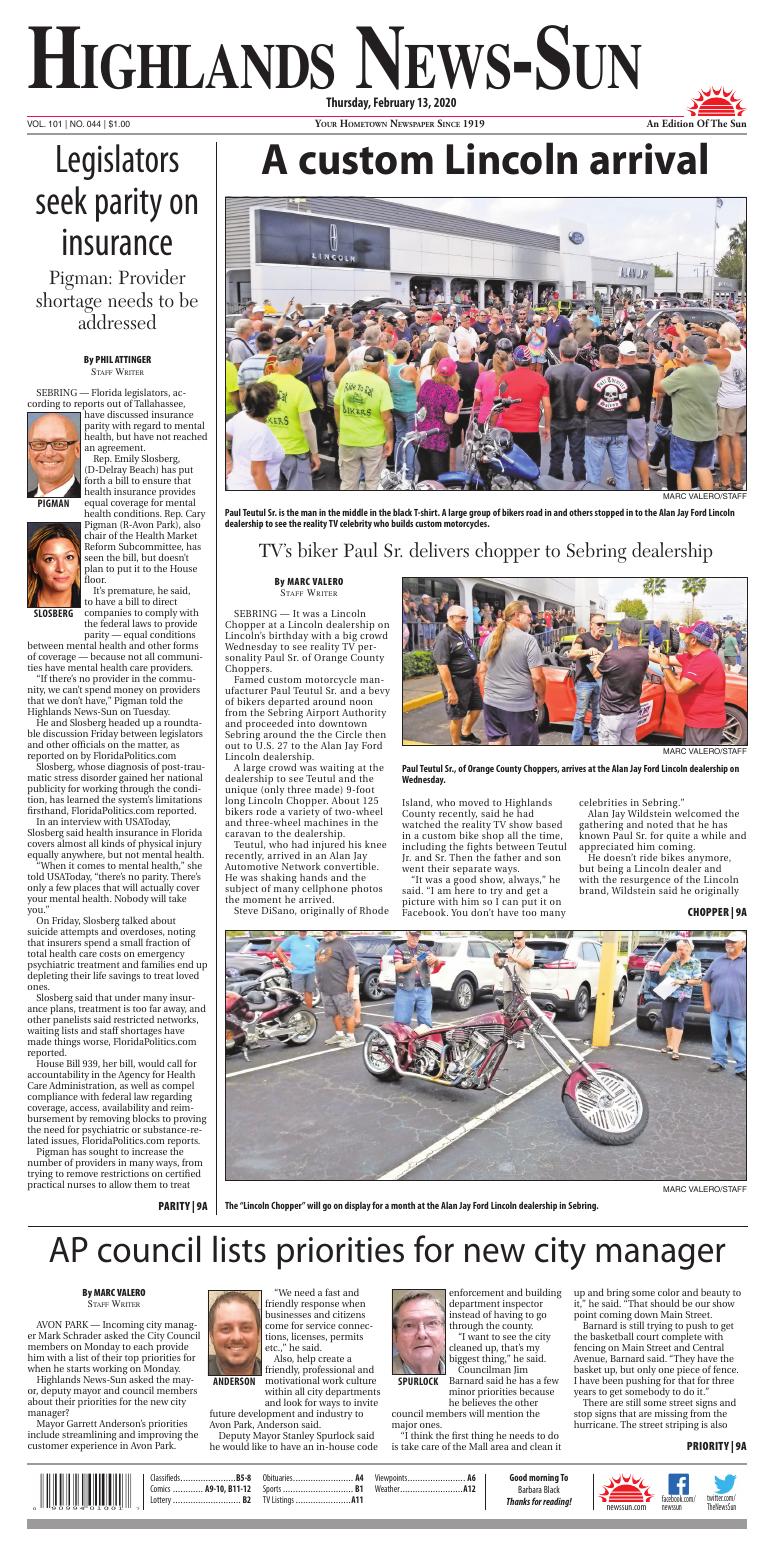 Paul Teutul Sr. is the man in the middle in the black T-shirt. A large group of bikers road in and others stopped in to the Alan Jay Ford Lincoln dealership to see the reality TV celebrity who builds custom motorcycles.

The “Lincoln Chopper” will go on display for a month at the Alan Jay Ford Lincoln dealership in Sebring.

SEBRING — It was a Lincoln Chopper at a Lincoln dealership on Lincoln’s birthday with a big crowd Wednesday to see reality TV personality Paul Sr. of Orange County Choppers.

Famed custom motorcycle manufacturer Paul Teutul Sr. and a bevy of bikers departed around noon from the Sebring Airport Authority and proceeded into downtown Sebring around the the Circle then out to U.S. 27 to the Alan Jay Ford Lincoln dealership.

A large crowd was waiting at the dealership to see Teutul and the unique (only three made) 9-foot long Lincoln Chopper. About 125 bikers rode a variety of two-wheel and three-wheel machines in the caravan to the dealership.

Teutul, who had injured his knee recently, arrived in an Alan Jay Automotive Network convertible. He was shaking hands and the subject of many cellphone photos the moment he arrived.

Steve DiSano, originally of Rhode Island, who moved to Highlands County recently, said he had watched the reality TV show based in a custom bike shop all the time, including the fights between Teutul Jr. and Sr. Then the father and son went their separate ways.

“It was a good show, always,” he said. “I am here to try and get a picture with him so I can put it on Facebook. You don’t have too many celebrities in Sebring.”

Alan Jay Wildstein welcomed the gathering and noted that he has known Paul Sr. for quite a while and appreciated him coming.

He doesn’t ride bikes anymore, but being a Lincoln dealer and with the resurgence of the Lincoln brand, Wildstein said he originally wanted to borrow the Lincoln Chopper. But, Paul Sr. said he would offer him the bike on the condition that it would be on display for the public to enjoy.

The bike will be on display in the Alan Jay Ford Lincoln dealership in Sebring.

Wildstein commented to Highlands News-Sun, it’s a big event for the middle of the week, for a Wednesday.

“We had some people say it is not a good day to do this,” he said. “I think it is really cool to do Lincoln on Lincoln’s Birthday and to have that bike here and the relationship with OCC [Orange County Choppers] and with Paul and Joannie [Bulger-Kay] has been great for a long time.

“For me it is really cool to have the privilege to have the bike. It’s history. It’s in the Ford Museum. That is where the other one is. It is a super-big honor We are excited about it.”

Orange County Choppers is located in Newburgh, New York, which is in Orange County, New York. The business was featured on the television show American Choppers on the Discovery Channel and then on TLC.

AVON PARK — Incoming city manager Mark Schrader asked the City Council members on Monday to each provide him with a list of their top priorities for when he starts working on Monday.

Highlands News-Sun asked the mayor, deputy mayor and council members about their priorities for the new city manager?

“We need a fast and friendly response when businesses and citizens come for service connections, licenses, permits etc.,” he said.

Also, help create a friendly, professional and motivational work culture within all city departments and look for ways to invite future development and industry to Avon Park, Anderson said.

Deputy Mayor Stanley Spurlock said he would like to have an in-house code enforcement and building department inspector instead of having to go through the county.

“I want to see the city cleaned up, that’s my biggest thing,” he said.

Councilman Jim Barnard said he has a few minor priorities because he believes the other council members will mention the major ones.

“I think the first thing he needs to do is take care of the Mall area and clean it up and bring some color and beauty to it,” he said. “That should be our show point coming down Main Street.

Barnard is still trying to push to get the basketball court complete with fencing on Main Street and Central Avenue, Barnard said. “They have the basket up, but only one piece of fence. I have been pushing for that for three years to get somebody to do it.”

There are still some street signs and stop signs that are missing from the hurricane. The street striping is also very poor with lines missing and turn arrows missing so people don’t know which lane is which, he said. These are a few of the minor things.

Barnard suggested the city also look at possibly hiring a manager for the Avon Park Municipal Airport so its capabilities can be further utilized and make it a positive income stream.

“We need to improve and add in more things to our children’s parks and recreation,” he said.

There needs to be due diligence in the hiring of staff as the city looks to fill about four or five positions, Barnard said. The city manager needs to make sure that qualified people are hired, at a reasonable pay scale, who can do the job.

“The main thing is to work together and actually for us to accomplish things instead of just talking about things,” Barnard said. “The city has been in a standstill pretty much for a couple of years and it is time for us to start it moving.”

Councilwoman Maria Sutherland said there are many priorities, but the main one would be to get the city’s employees on the same track with everyone doing what the functions of their job requires. Without employees doing their jobs, the city will just be spinning in circles, she said.

Schrader’s strong point is managing people, which is essential to having a good workforce that can move the city forward, Sutherland said.

“My other primary objective, obviously, is to get Avon Park presentable and cleaned up in the sense that it is attractive for potential businesses and keeping the ones that are here, here,” Sutherland said. That starts with code enforcement and adherence to land development regulations and having a department established to focus on it.

Also, the city has a lot of buildings in need of repairs with some that have been just sitting for more than a decade, she said. They have been trying to get some traction in the past year, but it seems the repairs can’t get mobilized.

“I would like him to take a much more aggressive approach to fixing our existing infrastructure,” Sutherland said.

Councilwoman Brenda Gray could not be reached for comment.

SEBRING — Florida legislators, according to reports out of Tallahassee, have discussed insurance parity with regard to mental health, but have not reached an agreement.

Rep. Emily Slosberg, (D-Delray Beach) has put forth a bill to ensure that health insurance provides equal coverage for mental health conditions. Rep. Cary Pigman (R-Avon Park), also chair of the Health Market Reform Subcommittee, has seen the bill, but doesn’t plan to put it to the House floor.

It’s premature, he said, to have a bill to direct companies to comply with the federal laws to provide parity — equal conditions between mental health and other forms of coverage — because not all communities have mental health care providers.

“If there’s no provider in the community, we can’t spend money on providers that we don’t have,” Pigman told the Highlands News-Sun on Tuesday.

He and Slosberg headed up a roundtable discussion Friday between legislators and other officials on the matter, as reported on by FloridaPolitics.com

Slosberg, whose diagnosis of post-traumatic stress disorder gained her national publicity for working through the condition, has learned the system’s limitations firsthand, FloridaPolitics.com reported.

In an interview with USAToday, Slosberg said health insurance in Florida covers almost all kinds of physical injury equally anywhere, but not mental health.

“When it comes to mental health,” she told USAToday, “there’s no parity. There’s only a few places that will actually cover your mental health. Nobody will take you.”

On Friday, Slosberg talked about suicide attempts and overdoses, noting that insurers spend a small fraction of total health care costs on emergency psychiatric treatment and families end up depleting their life savings to treat loved ones.

Slosberg said that under many insurance plans, treatment is too far away, and other panelists said restricted networks, waiting lists and staff shortages have made things worse, FloridaPolitics.com reported.

House Bill 939, her bill, would call for accountability in the Agency for Health Care Administration, as well as compel compliance with federal law regarding coverage, access, availability and reimbursement by removing blocks to proving the need for psychiatric or substance-related issues, FloridaPolitics.com reports.

Pigman has sought to increase the number of providers in many ways, from trying to remove restrictions on certified practical nurses to allow them to treat patients without having to be under a doctor’s supervision. He also wants to increase the number of peer-to-peer counselors by amending some background check restrictions. Peer-to-peer counselors for ex-convicts, for example, would often be ex-convicts themselves, and would be prevented under current background checks, Pigman said Tuesday.

He told the Highlands News-Sun that his suggestion to Friday’s panel was to find a way to increase the number of providers in any given area.

Some money has already gone to graduate schools to turn out more psychology specialists, he said Tuesday. While that might bring only 25-30 new professionals each year to the 1,000 or more shortage, he said the best way to cover a gap in coverage is to provide more professionals and get them placed in communities.

Until then, he said, he won’t recommend the House hear a bill on accountability in spending. 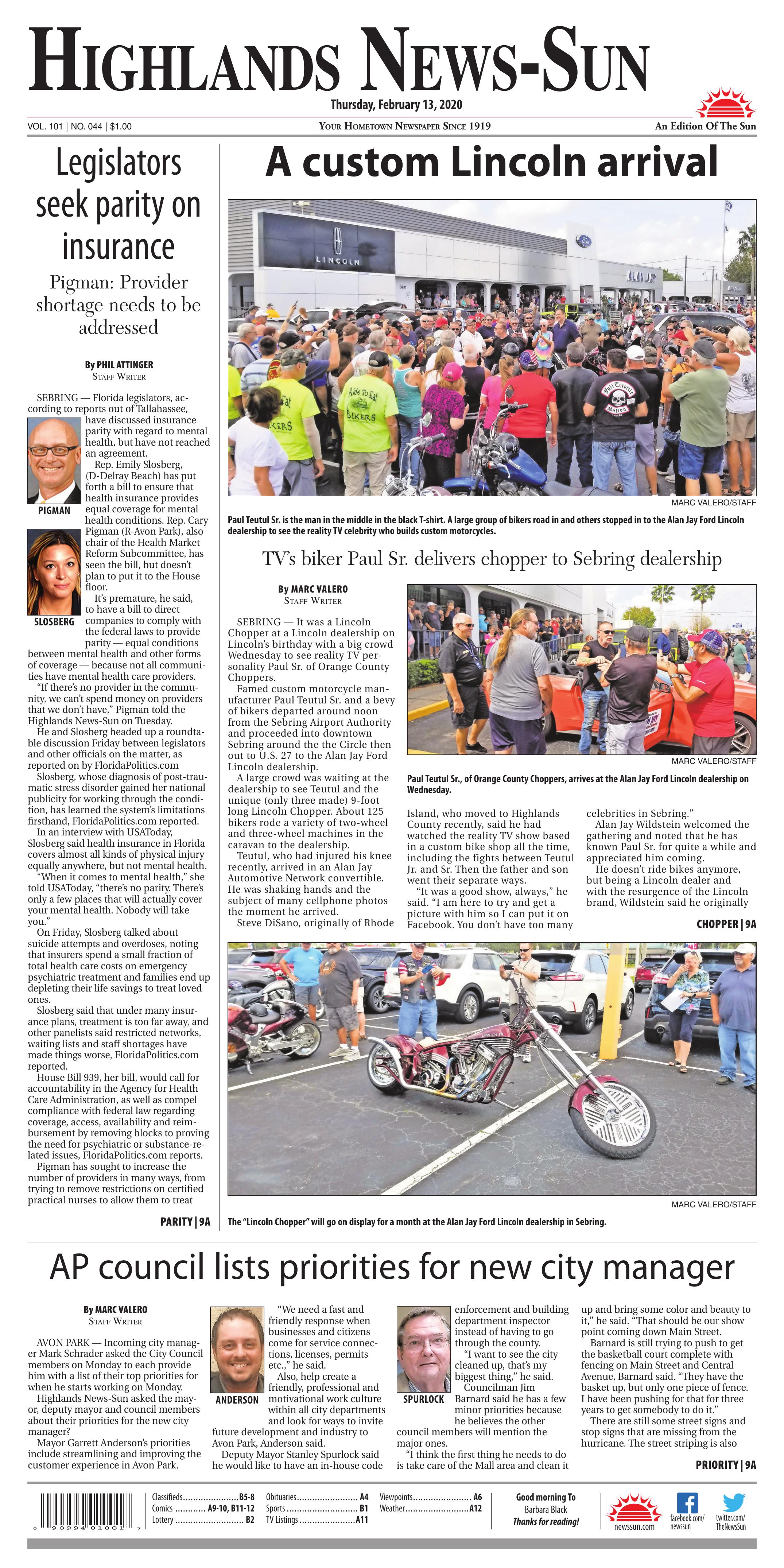