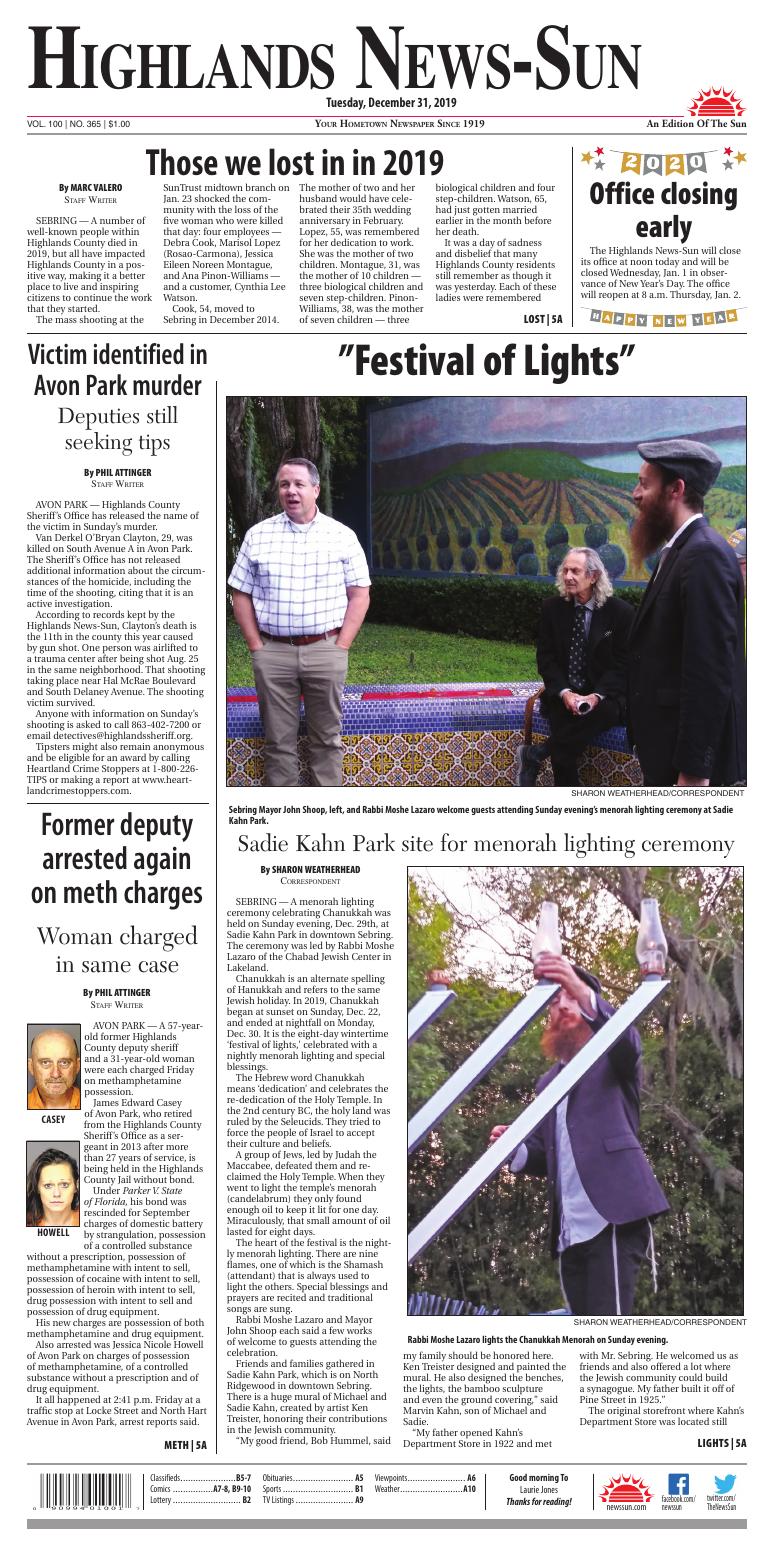 SEBRING — A number of well-known people within Highlands County died in 2019, but all have impacted Highlands County in a positive way, making it a better place to live and inspiring citizens to continue the work that they started.

The mass shooting at the SunTrust midtown branch on Jan. 23 shocked the community with the loss of the five woman who were killed that day: four employees — Debra Cook, Marisol Lopez (Rosao-Carmona), Jessica Eileen Noreen Montague, and Ana Pinon-Williams — and a customer, Cynthia Lee Watson.

It was a day of sadness and disbelief that many Highlands County residents still remember as though it was yesterday. Each of these ladies were remembered for their kindness and willingness to help others.

Bill Cross passed away on Feb. 7. He worked for AT&T for 27 years before becoming president of Americall Long Distance Company and subsequently the developer of the Country Club of Sebring.

Keith “Toby” Stokes, the founder of Toby the Clown Foundation in Lake Placid, passed away on March 22. The foundation features a school for adult clowns as well as younger clowns called Junior Joeys.

Gary Musselman, owner of Musselman’s Appliances, passed away on March 31.

Bert J. Harris Jr., former state representative and advocate for agriculture, passed away on May 19. Harris, for whom the Highlands County Bert J. Harris Jr. Agricultural Center was named, was a regular figure in central Florida agriculture, a 1999 inductee into the Florida Agriculture Hall of Fame and a champion of private property rights in Florida.

Roy Henderson, whose parents were some of the first homesteaders in Lake Placid, passed away June 14. Circa 1918, Henderson’s mother and father, Sallie and L.L. Henderson, built the homestead on Lake Mirror on land that was granted to them by then-President Woodrow Wilson.

Thelma Pyle, longtime employee and volunteer at the Greater Sebring Chamber of Commerce, passed away June 16. She served three terms on the Sebring City Council from 1978 to 1983, with a term as the first female council president in 1980.

Joseph Rey, Lake Placid town councilman from 1992-1999, passed away July 21. He worked as a financial advisor and moved to Highlands County in 1990.

Dr. Bill Jernigan, veterinarian and owner of Sebring Animal Hospital, passed away on Sept. 7. He was a longtime Rotarian and was involved in the planning of the club’s annual spaghetti dinner served at the fairgrounds.

F. Elgin Bayless, Jr., a former Sebring City Council member and real estate and appraisal businessman, died Sept. 26. He was a former state official who laid out the route for U.S. 27 through Florida. He also established the first wayside park in Florida and the first welcome station near the Florida-Georgia border. He was a retired chairman and president of the former Barnett Bank of Highlands County.

Thomas M. Stidham graduated from Lake Placid High School and returned there in 1962, after graduation from college, to begin his band directing career. He directed bands in Florida, Georgia, Texas and was involved in every aspect of the University of Kansas band program until his retirement in 2012. He passed away Oct. 1.

Marvin Kahn in front of the original location of Kahn’s Department Store on North Ridgewood Drive, not far from Sadie Kahn Park.

SEBRING — A menorah lighting ceremony celebrating Chanukkah was held on Sunday evening, Dec. 29th, at Sadie Kahn Park in downtown Sebring. The ceremony was led by Rabbi Moshe Lazaro of the Chabad Jewish Center in Lakeland.

Chanukkah is an alternate spelling of Hanukkah and refers to the same Jewish holiday. In 2019, Chanukkah began at sunset on Sunday, Dec. 22, and ended at nightfall on Monday, Dec. 30. It is the eight-day wintertime ‘festival of lights,’ celebrated with a nightly menorah lighting and special blessings.

The Hebrew word Chanukkah means ‘dedication’ and celebrates the re-dedication of the Holy Temple. In the 2nd century BC, the holy land was ruled by the Seleucids. They tried to force the people of Israel to accept their culture and beliefs.

A group of Jews, led by Judah the Maccabee, defeated them and reclaimed the Holy Temple. When they went to light the temple’s menorah (candelabrum) they only found enough oil to keep it lit for one day. Miraculously, that small amount of oil lasted for eight days.

The heart of the festival is the nightly menorah lighting. There are nine flames, one of which is the Shamash (attendant) that is always used to light the others. Special blessings and prayers are recited and traditional songs are sung.

Rabbi Moshe Lazaro and Mayor John Shoop each said a few works of welcome to guests attending the celebration.

Friends and families gathered in Sadie Kahn Park, which is on North Ridgewood in downtown Sebring. There is a huge mural of Michael and Sadie Kahn, created by artist Ken Treister, honoring their contributions in the Jewish community.

“My good friend, Bob Hummel, said my family should be honored here. Ken Treister designed and painted the mural. He also designed the benches, the lights, the bamboo sculpture and even the ground covering,” said Marvin Kahn, son of Michael and Sadie.

“My father opened Kahn’s Department Store in 1922 and met with Mr. Sebring. He welcomed us as friends and also offered a lot where the Jewish community could build a synagogue. My father built it off of Pine Street in 1925.”

The original storefront where Kahn’s Department Store was located still stands next to the old Nan-ces-o-wee Hotel at 139 North Ridgewood Drive.

“Dad used to come to work around 4 a.m. He met with his friends across the street at Mark’s Café for coffee. There he met Mr. Crutchfield and Mr. May. He became interested in the citrus groves and bought his first orange grove in 1933. Great friendships were created there,” Marvin Kahn said.

Since the miracle of Chanukkah involves oil, it is customary to eat foods fried in oil to celebrate. Some of the holiday favorites are latke (potato cakes) and sufganya (donuts).

Lazaro’s children passed out the homemade donuts to the guests at the ceremony. Butch and Eileen Tork enjoyed the tasty treat, celebrating an important event.

“We’re here to support the people in the Jewish community and hope we can always enjoy this type of religious freedom,” Eileen said.

“Children were not allowed to pray during the destruction of the synagogue,” Mary Ann Romer explained. “Playing dreidel provided a way to teach and learn while they were playing a game.”

Lazaro lit the menorah candles with the help of his young sons, one by one until they were all illuminated. He then spoke about the Torah readings and the ideas of physicality and spirituality.

“These ideas are not only for one’s self, they need to be understood and the message spread to all,” Lazaro said. “This is the maximum potential of light and is meant to inspire for the entire year.”

AVON PARK — Highlands County Sheriff’s Office has released the name of the victim in Sunday’s murder.

Van Derkel O’Bryan Clayton, 29, was killed on South Avenue A in Avon Park. The Sheriff’s Office has not released additional information about the circumstances of the homicide, including the time of the shooting, citing that it is an active investigation.

According to records kept by the Highlands News-Sun, Clayton’s death is the 11th in the county this year caused by gun shot. One person was airlifted to a trauma center after being shot Aug. 25 in the same neighborhood. That shooting taking place near Hal McRae Boulevard and South Delaney Avenue. The shooting victim survived.

Anyone with information on Sunday’s shooting is asked to call 863-402-7200 or email detectives@highlandssheriff.org.

Tipsters might also remain anonymous and be eligible for an award by calling Heartland Crime Stoppers at 1-800-226-TIPS or making a report at www.heartlandcrimestoppers.com.

AVON PARK — A 57-year-old former Highlands County deputy sheriff and a 31-year-old woman were each charged Friday on methamphetamine possession.

His new charges are possession of both methamphetamine and drug equipment.

Also arrested was Jessica Nicole Howell of Avon Park on charges of possession of methamphetamine, of a controlled substance without a prescription and of drug equipment.

It all happened at 2:41 p.m. Friday at a traffic stop at Locke Street and North Hart Avenue in Avon Park, arrest reports said. Casey was driving a gray Ford F250 and Howell was his passenger.

Deputies then searched the truck. In the glove compartment, they found two used syringes and a blue elastic band. The syringes field-tested positive for methamphetamine residue, reports said, and the band was alleged to have been used as a tourniquet to enlarge veins for injection.

On the driver side of the center console, in an open-topped bin that would be beside Casey’s right leg, deputies found a black digital scale with residue that also field-tested positive for methamphetamine, reports said.

The scale was alleged to have been used to weigh narcotics for sale.

When questioned under Miranda warning, Casey said he was unaware of the items being in his truck, reports said. Howell was also questioned, but her statement was redacted from reports.

During a strip search at the jail, deputies found a bag on her that also had heroin residue, again based on a presumptive field test.

The Highlands News-Sun will close its office at noon today and will be closed Wednesday, Jan. 1 in observance of New Year’s Day. The office will reopen at 8 a.m. Thursday, Jan. 2. 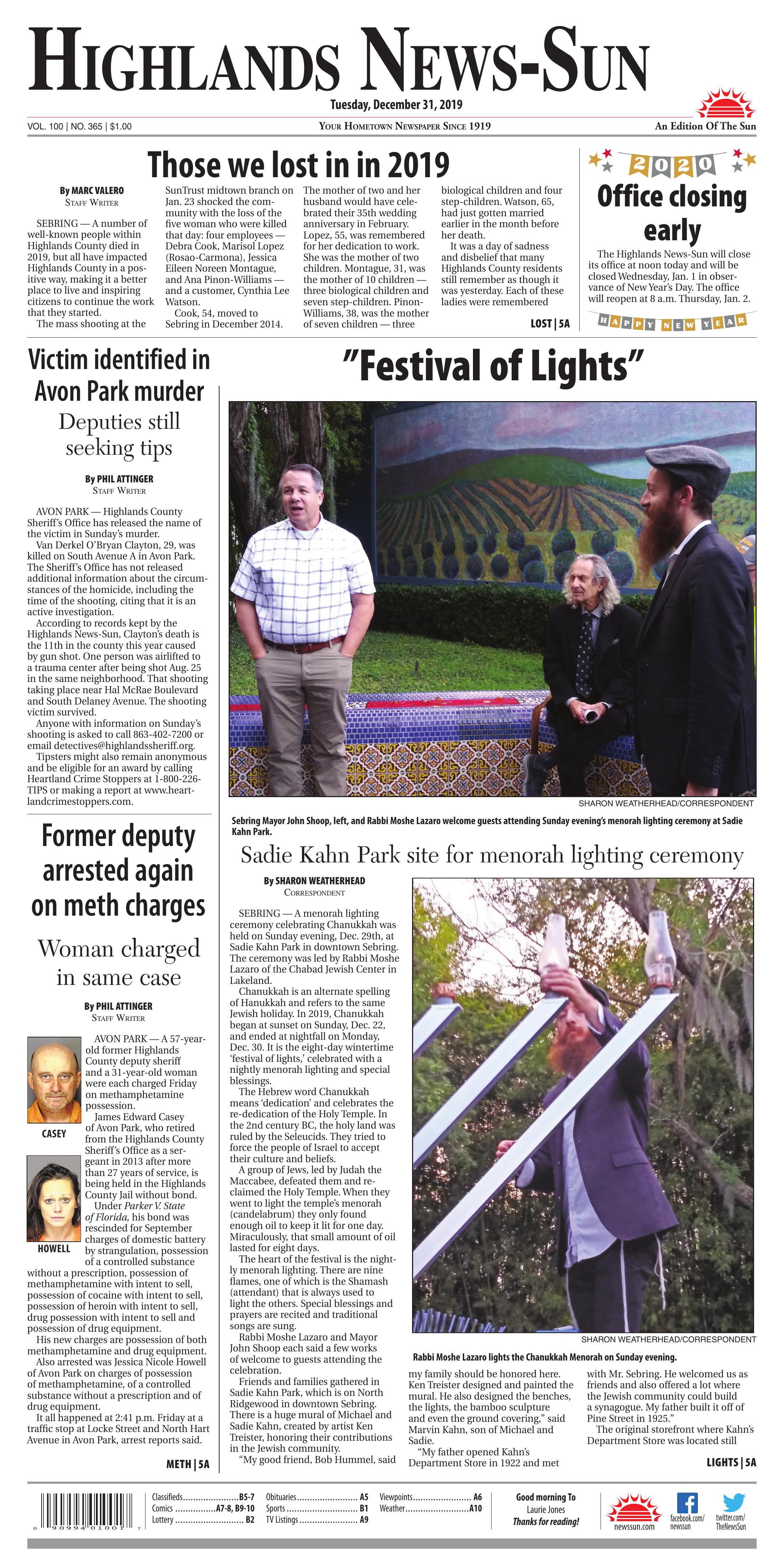