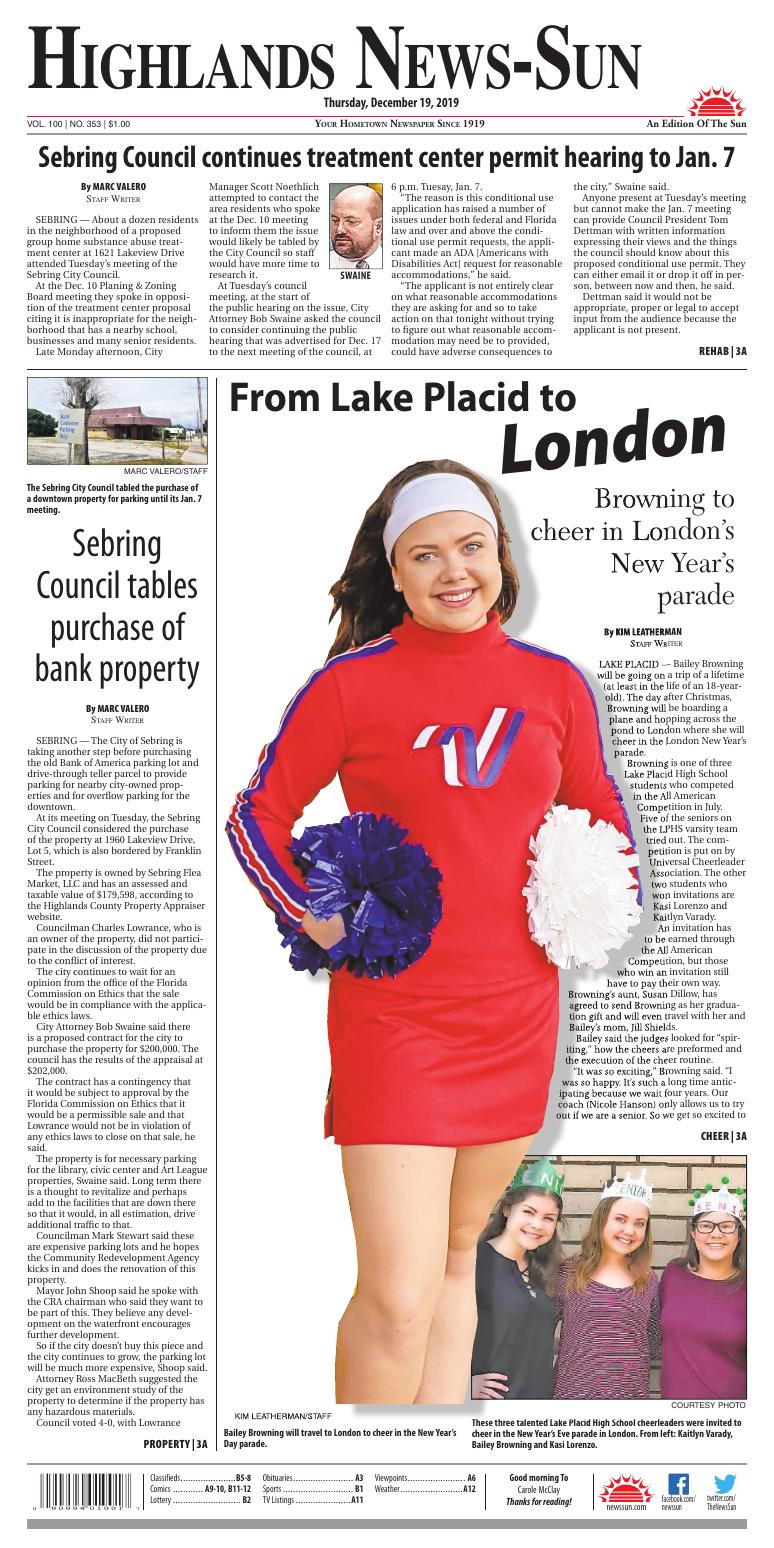 SEBRING — About a dozen residents in the neighborhood of a proposed group home substance abuse treatment center at 1621 Lakeview Drive attended Tuesday’s meeting of the Sebring City Council.

At the Dec. 10 Planing & Zoning Board meeting they spoke in opposition of the treatment center proposal citing it is inappropriate for the neighborhood that has a nearby school, businesses and many senior residents.

Late Monday afternoon, City Manager Scott Noethlich attempted to contact the area residents who spoke at the Dec. 10 meeting to inform them the issue would likely be tabled by the City Council so staff would have more time to research it.

“The reason is this conditional use application has raised a number of issues under both federal and Florida law and over and above the conditional use permit requests, the applicant made an ADA [Americans with Disabilities Act] request for reasonable accommodations,” he said.

Anyone present at Tuesday’s meeting but cannot make the Jan. 7 meeting can provide Council President Tom Dettman with written information expressing their views and the things the council should know about this proposed conditional use permit. They can either email it or drop it off in person, between now and then, he said.

Dettman said it would not be appropriate, proper or legal to accept input from the audience because the applicant is not present.

Swaine said he informed the applicant that he was going to ask council for a continuance of the hearing that is the reason the applicant was not present.

“I apologize for those that are here and wanted to express their views this evening, but we have to make sure we are in compliance with the ADA,” he said.

The council unanimously approved moving the hearing to the Jan. 7 meeting.

At its Dec. 10 meeting, the Zoning Board, by a 4-0 vote, denied the request for a conditional use permit for the treatment center. One board member abstained due to a conflict of interest.

Larry Bieda, who operates Academy Health Solutions, LLC in Palm Beach County, seeks to open a substance abuse treatment center for up to 15 people who would voluntarily be in the for-profit program with a staff of three people.

The Sebring City Council tabled the purchase of a downtown property for parking until its Jan. 7 meeting.

SEBRING — The City of Sebring is taking another step before purchasing the old Bank of America parking lot and drive-through teller parcel to provide parking for nearby city-owned properties and for overflow parking for the downtown.

At its meeting on Tuesday, the Sebring City Council considered the purchase of the property at 1960 Lakeview Drive, Lot 5, which is also bordered by Franklin Street.

The property is owned by Sebring Flea Market, LLC and has an assessed and taxable value of $179,598, according to the Highlands County Property Appraiser website.

The city continues to wait for an opinion from the office of the Florida Commission on Ethics that the sale would be in compliance with the applicable ethics laws.

City Attorney Bob Swaine said there is a proposed contract for the city to purchase the property for $200,000. The council has the results of the appraisal at $202,000.

The contract has a contingency that it would be subject to approval by the Florida Commission on Ethics that it would be a permissible sale and that Lowrance would not be in violation of any ethics laws to close on that sale, he said.

The property is for necessary parking for the library, civic center and Art League properties, Swaine said. Long term there is a thought to revitalize and perhaps add to the facilities that are down there so that it would, in all estimation, drive additional traffic to that.

Councilman Mark Stewart said these are expensive parking lots and he hopes the Community Redevelopment Agency kicks in and does the renovation of this property.

Mayor John Shoop said he spoke with the CRA chairman who said they want to be part of this. They believe any development on the waterfront encourages further development.

So if the city doesn’t buy this piece and the city continues to grow, the parking lot will be much more expensive, Shoop said.

Attorney Ross MacBeth suggested the city get an environment study of the property to determine if the property has any hazardous materials.

Council voted 4-0, with Lowrance abstaining, to table the issue until the Jan. 7 council meeting and directed city administration to have a phase I environmental study of the property.

The city has potential layouts, with an overlay of the existing property, for angled parking and straight-in parking with both layouts creating about 140 parking spaces.

Bailey Browning will travel to London to cheer in the New Year’s Day parade.

Bailey Browning stands between two of her biggest supporters, on the left is Holly Rapp and Kimberly Wells is on the right.

LAKE PLACID — Bailey Browning will be going on a trip of a lifetime (at least in the life of an 18-year-old). The day after Christmas, Browning will be boarding a plane and hopping across the pond to London where she will cheer in the London New Year’s parade.

Browning is one of three Lake Placid High School students who competed in the All American Competition in July. Five of the seniors on the LPHS varsity team tried out. The competition is put on by Universal Cheerleader Association. The other two students who won invitations are Kasi Lorenzo and Kaitlyn Varady.

An invitation has to be earned through the All American Competition, but those who win an invitation still have to pay their own way. Browning’s aunt, Susan Dillow, has agreed to send Browning as her graduation gift and will even travel with her and Bailey’s mom, Jill Shields.

Bailey said the judges looked for “spiriting,” how the cheers are preformed and the execution of the cheer routine.

“It was so exciting,” Browning said. “I was so happy. It’s such a long time anticipating because we wait four years. Our coach (Nicole Hanson) only allows us to try out if we are a senior. So we get so excited to try out.”

She said her name was the last one called when the winners were announced. Browning immediately called her family and her “school mom,” Kim Wells, a data operator at the high school. Browning said her parents and step-parents were all very proud and happy for her.

“I was really nervous because I am not the best dancer,” Browning said. “When I drove there, I was sick to my stomach because I knew I was trying out. My name was the last to be called. I didn’t think they were going to call my name. I was so happy.”

Browning plans on doing some sight-seeing with her family and with the Universal Cheerleader Association. She will be seeing “Wicked,” tour London and see Windsor Castle, Buckingham Palace, St. Paul’s cathedral and, of course, ride in a double-decker bus. Wells told Browning that she shouldn’t try to make the palace guard smile or move at the palace because she will be the one to get caught.

Browning is not just an All-American cheerleader, she’s smart and aims to become a trauma surgeon.

“She’s amazing,” Wells said. “She has gone to Nova University’s medical camp the last two years and has gotten scholarships there. She has taken dual enrollment classes and Advanced Placement classes.”

“If it weren’t for Ms. Wells, I wouldn’t have the grades, and I wouldn’t be cheering,” Browning said.

“We are so proud of Bailey,” Vice Principal Holly Rapp said. “”She has such a kind heart and strong work ethic and she is a leader among her peers. She works hard on the field, in her job and with her academics. She balances everything very well. She always has a smile. We are excited she is getting this opportunity. We are proud to have her represent Lake Placid High School.” 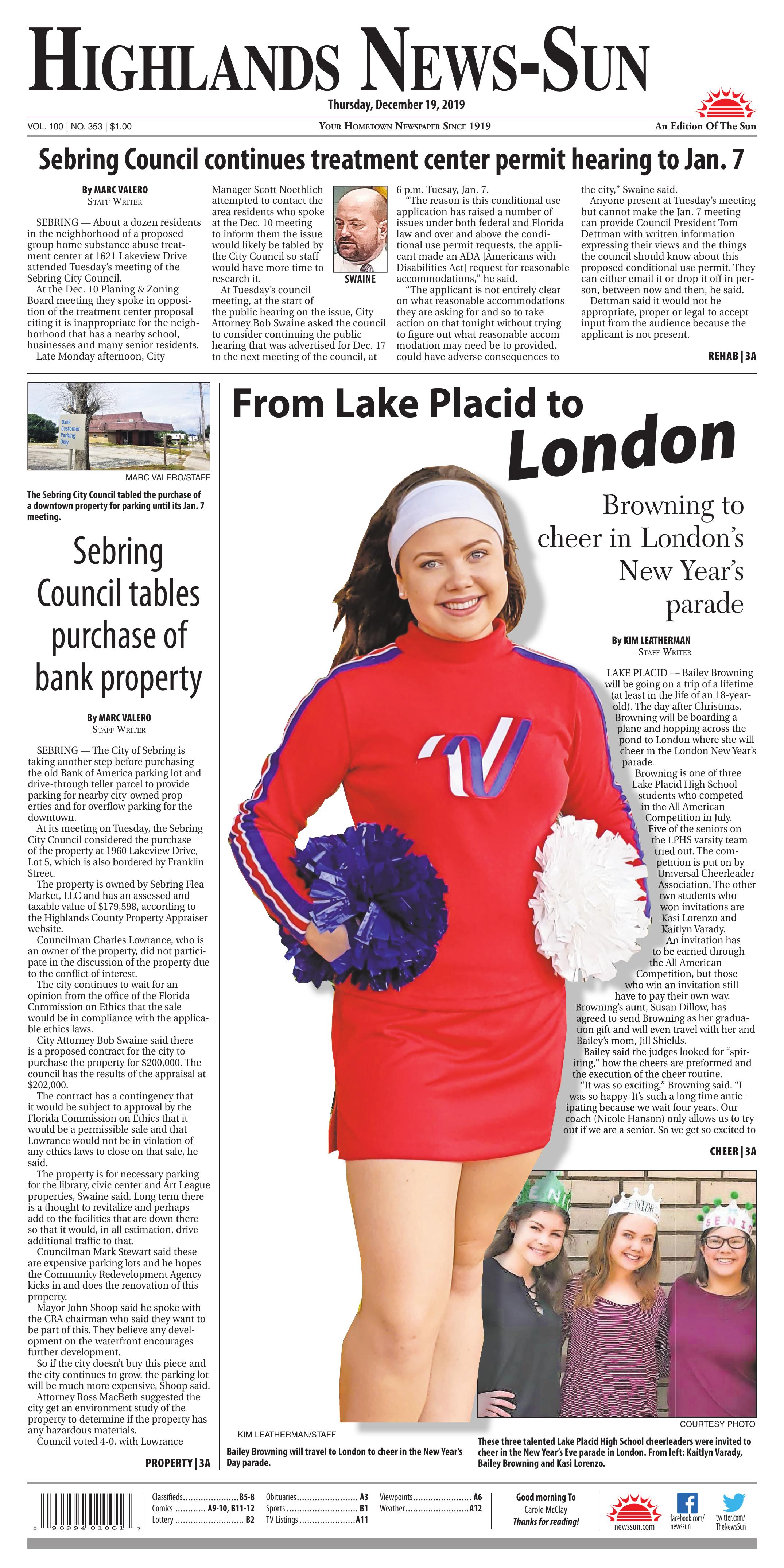