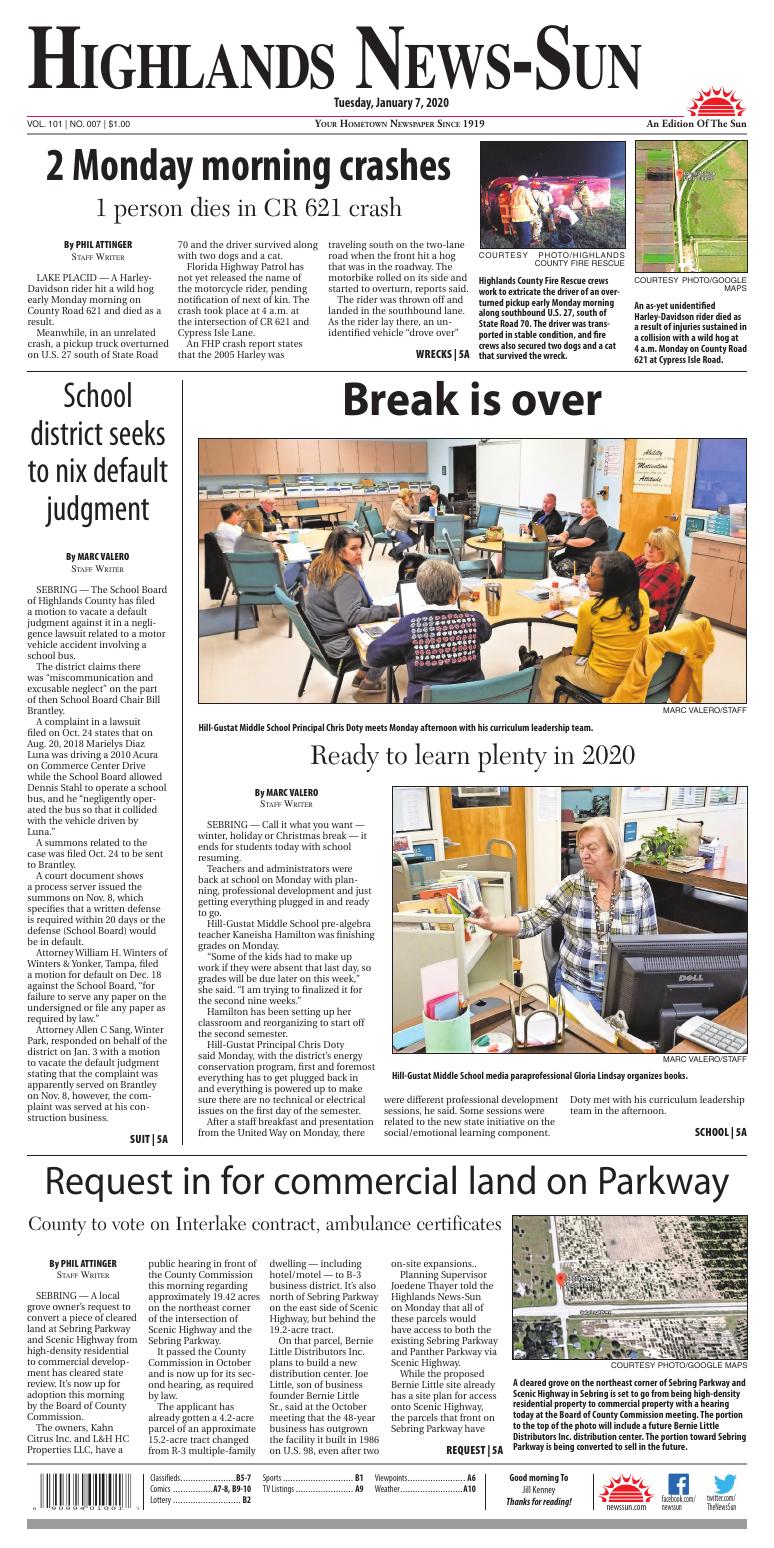 An as-yet unidentified Harley-Davidson rider died as a result of injuries sustained in a collision with a wild hog at 4 a.m. Monday on County Road 621 at Cypress Isle Road.

Highlands County Fire Rescue crews work to extricate the driver of an overturned pickup early Monday morning along southbound U.S. 27, south of State Road 70. The driver was transported in stable condition, and fire crews also secured two dogs and a cat that survived the wreck.

LAKE PLACID — A Harley-Davidson rider hit a wild hog early Monday morning on County Road 621 and died as a result.

Meanwhile, in an unrelated crash, a pickup truck overturned on U.S. 27 south of State Road 70 and the driver survived along with two dogs and a cat.

Florida Highway Patrol has not yet released the name of the motorcycle rider, pending notification of next of kin. The crash took place at 4 a.m. at the intersection of CR 621 and Cypress Isle Lane.

An FHP crash report states that the 2005 Harley was traveling south on the two-lane road when the front hit a hog that was in the roadway. The motorbike rolled on its side and started to overturn, reports said.

The rider was thrown off and landed in the southbound lane. As the rider lay there, an unidentified vehicle “drove over” the rider, FHP reports state, and kept going south on CR 621.

Approximately an hour after that crash, at 5 a.m. Monday, Highlands County Fire Rescue was dispatched to a pickup that had overturned on southbound U.S. 27, just south of State Road 70, and landed on the driver’s side.

It appeared, from an HCFR photograph, to be a maroon or dark red Dodge crew-cab truck with a matching hard-shell tonneau cover on the bed.

Fire crews extricated the driver by removing the windshield and were able to transport the patient in stable condition.

Firefighters also secured two dogs and a cat that were riding in the truck. They were taken into the care of Highlands County Sheriff’s Office Animal Services.

SEBRING — Call it what you want — winter, holiday or Christmas break — it ends for students today with school resuming.

Teachers and administrators were back at school on Monday with planning, professional development and just getting everything plugged in and ready to go.

“Some of the kids had to make up work if they were absent that last day, so grades will be due later on this week,” she said. “I am trying to finalized it for the second nine weeks.”

Hamilton has been setting up her classroom and reorganizing to start off the second semester.

Hill-Gustat Principal Chris Doty said Monday, with the district’s energy conservation program, first and foremost everything has to get plugged back in and everything is powered up to make sure there are no technical or electrical issues on the first day of the semester.

After a staff breakfast and presentation from the United Way on Monday, there were different professional development sessions, he said. Some sessions were related to the new state initiative on the social/emotional learning component. Doty met with his curriculum leadership team in the afternoon.

Highlands News-Sun asked about the after-school daycare program, which started at the secondary level this school year.

The Aftercare program has about 10 to 15 students and it is going very well, Doty said. It gives the students an opportunity to work on their homework with adults that will assist.

If the number of students increase, the school will be able to offer more programs, Doty said.

Media paraprofessional Gloria Lindsay worked in the media center Monday pulling books for teachers such as the “classics” and “award winning” books.

The next school holiday is Martin Luther King, Jr. Day on Jan. 20.

Students will be off on Feb. 13 and 14 (during the Highlands County Fair), which are teacher workdays.

A cleared grove on the northeast corner of Sebring Parkway and Scenic Highway in Sebring is set to go from being high-density residential property to commercial property with a hearing today at the Board of County Commission meeting. The portion to the top of the photo will include a future Bernie Little Distributors Inc. distribution center. The portion toward Sebring Parkway is being converted to sell in the future.

SEBRING — A local grove owner’s request to convert a piece of cleared land at Sebring Parkway and Scenic Highway from high-density residential to commercial development has cleared state review. It’s now up for adoption this morning by the Board of County Commission.

The owners, Kahn Citrus Inc. and L&H HC Properties LLC, have a public hearing in front of the County Commission this morning regarding approximately 19.42 acres on the northeast corner of the intersection of Scenic Highway and the Sebring Parkway.

It passed the County Commission in October and is now up for its second hearing, as required by law.

The applicant has already gotten a 4.2-acre parcel of an approximate 15.2-acre tract changed from R-3 multiple-family dwelling — including hotel/motel — to B-3 business district. It’s also north of Sebring Parkway on the east side of Scenic Highway, but behind the 19.2-acre tract.

On that parcel, Bernie Little Distributors Inc. plans to build a new distribution center. Joe Little, son of business founder Bernie Little Sr., said at the October meeting that the 48-year business has outgrown the facility it built in 1986 on U.S. 98, even after two on-site expansions..

Planning Supervisor Joedene Thayer told the Highlands News-Sun on Monday that all of these parcels would have access to both the existing Sebring Parkway and Panther Parkway via Scenic Highway.

While the proposed Bernie Little site already has a site plan for access onto Scenic Highway, the parcels that front on Sebring Parkway have no site plans at this time, Thayer said. They are getting rezoned to make them more attractive as commercial business sites.

Still, she said access to those sites would likely be off Scenic Highway, not off the Parkway, which is a four-lane divided highway crossed by a two-lane road at a signalized intersection at that point.

Also on the agenda are hearings to approve certificates of public convenience and necessity for ambulance companies and the contract for work to start on resurfacing East Interlake Boulevard in Lake Placid.

The resurfacing contract is being paid entirely out of the Florida Department of Transportation’s Small County Outreach Program (SCOP), with a deadline for completion of March 1, 2020.

SEBRING — The School Board of Highlands County has filed a motion to vacate a default judgment against it in a negligence lawsuit related to a motor vehicle accident involving a school bus.

The district claims there was “miscommunication and excusable neglect” on the part of then School Board Chair Bill Brantley.

A complaint in a lawsuit filed on Oct. 24 states that on Aug. 20, 2018 Marielys Diaz Luna was driving a 2010 Acura on Commerce Center Drive while the School Board allowed Dennis Stahl to operate a school bus, and he “negligently operated the bus so that it collided with the vehicle driven by Luna.”

A summons related to the case was filed Oct. 24 to be sent to Brantley.

A court document shows a process server issued the summons on Nov. 8, which specifies that a written defense is required within 20 days or the defense (School Board) would be in default.

Attorney William H. Winters of Winters & Yonker, Tampa, filed a motion for default on Dec. 18 against the School Board, “for failure to serve any paper on the undersigned or file any paper as required by law.”

Attorney Allen C Sang, Winter Park, responded on behalf of the district on Jan. 3 with a motion to vacate the default judgment stating that the complaint was apparently served on Brantley on Nov. 8, however, the complaint was served at his construction business.

“The defendant disputes the allegations and claimed damages in this case, therefore, it has meritorious defense and a good faith belief that it will prevail on the merits,” the motion stated.

“Due to a miscommunication and inadvertent, excusable neglect, on the part of Mr. Brantley, who mistakenly assumed that the School Board and or their defense counsel would also receive a copy of the complaint, no response to the complaint was timely filed.”

On Jan. 3, Sang also filed the defendant’s answer and affirmative defenses, which states the plaintiff’s medical bills are not reasonable, related or necessary and the injuries were due to the failure to use a seat belt. 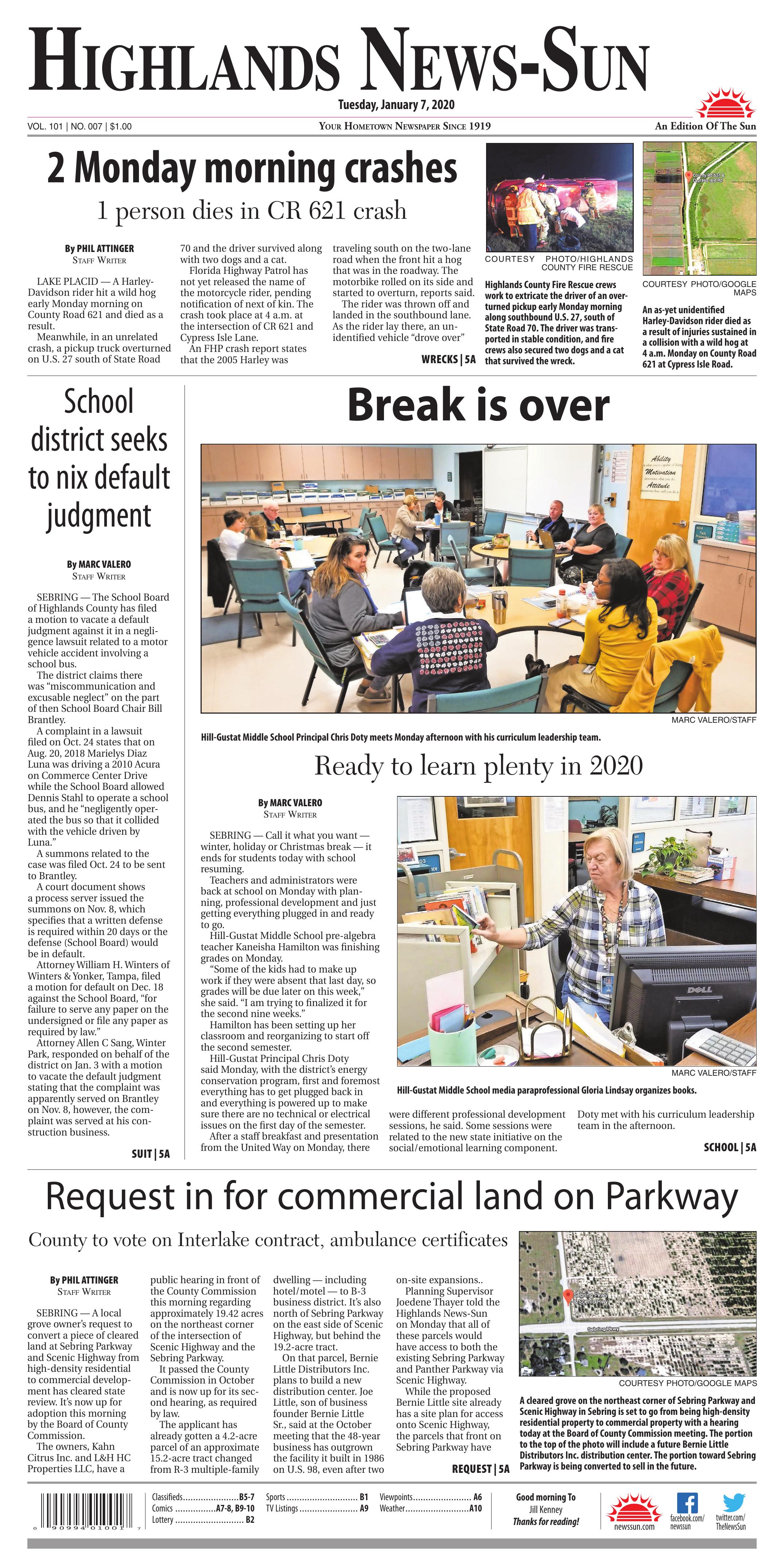