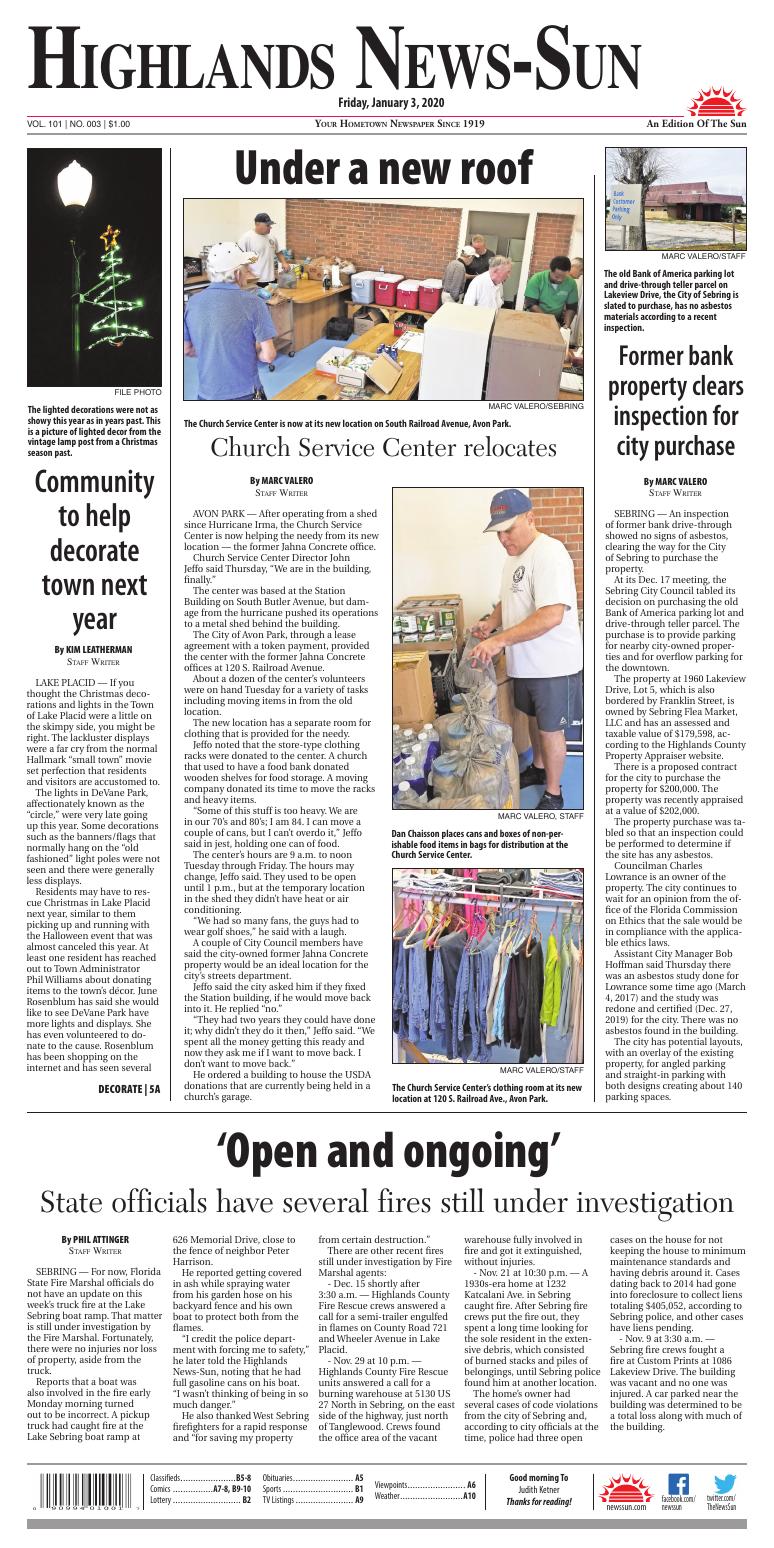 Dan Chaisson places cans and boxes of non-perishable food items in bags for distribution at the Church Service Center.

The Church Service Center is now at its new location on South Railroad Avenue, Avon Park.

AVON PARK — After operating from a shed since Hurricane Irma, the Church Service Center is now helping the needy from its new location — the former Jahna Concrete office.

The center was based at the Station Building on South Butler Avenue, but damage from the hurricane pushed its operations to a metal shed behind the building.

The City of Avon Park, through a lease agreement with a token payment, provided the center with the former Jahna Concrete offices at 120 S. Railroad Avenue.

About a dozen of the center’s volunteers were on hand Tuesday for a variety of tasks including moving items in from the old location.

The new location has a separate room for clothing that is provided for the needy.

Jeffo noted that the store-type clothing racks were donated to the center. A church that used to have a food bank donated wooden shelves for food storage. A moving company donated its time to move the racks and heavy items.

The center’s hours are 9 a.m. to noon Tuesday through Friday. The hours may change, Jeffo said. They used to be open until 1 p.m., but at the temporary location in the shed they didn’t have heat or air conditioning.

“We had so many fans, the guys had to wear golf shoes,” he said with a laugh.

A couple of City Council members have said the city-owned former Jahna Concrete property would be an ideal location for the city’s streets department.

Jeffo said the city asked him if they fixed the Station building, if he would move back into it. He replied “no.”

He ordered a building to house the USDA donations that are currently being held in a church’s garage.

SEBRING — For now, Florida State Fire Marshal officials do not have an update on this week’s truck fire at the Lake Sebring boat ramp. That matter is still under investigation by the Fire Marshal. Fortunately, there were no injuries nor loss of property, aside from the truck.

Reports that a boat was also involved in the fire early Monday morning turned out to be incorrect. A pickup truck had caught fire at the Lake Sebring boat ramp at 626 Memorial Drive, close to the fence of neighbor Peter Harrison.

He reported getting covered in ash while spraying water from his garden hose on his backyard fence and his own boat to protect both from the flames.

“I credit the police department with forcing me to safety,” he later told the Highlands News-Sun, noting that he had full gasoline cans on his boat. “I wasn’t thinking of being in so much danger.”

He also thanked West Sebring firefighters for a rapid response and “for saving my property from certain destruction.”

There are other recent fires still under investigation by Fire Marshal agents:

- Nov. 29 at 10 p.m. — Highlands County Fire Rescue units answered a call for a burning warehouse at 5130 US 27 North in Sebring, on the east side of the highway, just north of Tanglewood. Crews found the office area of the vacant warehouse fully involved in fire and got it extinguished, without injuries.

- Nov. 21 at 10:30 p.m. — A 1930s-era home at 1232 Katcalani Ave. in Sebring caught fire. After Sebring fire crews put the fire out, they spent a long time looking for the sole resident in the extensive debris, which consisted of burned stacks and piles of belongings, until Sebring police found him at another location.

The home’s owner had several cases of code violations from the city of Sebring and, according to city officials at the time, police had three open cases on the house for not keeping the house to minimum maintenance standards and having debris around it. Cases dating back to 2014 had gone into foreclosure to collect liens totaling $405,052, according to Sebring police, and other cases have liens pending.

- Nov. 9 at 3:30 a.m. — Sebring fire crews fought a fire at Custom Prints at 1086 Lakeview Drive. The building was vacant and no one was injured. A car parked near the building was determined to be a total loss along with much of the building.

The lighted decorations were not as showy this year as in years past. This is a picture of lighted decor from the vintage lamp post from a Christmas season past.

A prior picture of two city employees working to put up a lighted candy cane.

LAKE PLACID — If you thought the Christmas decorations and lights in the Town of Lake Placid were a little on the skimpy side, you might be right. The lackluster displays were a far cry from the normal Hallmark “small town” movie set perfection that residents and visitors are accustomed to.

The lights in DeVane Park, affectionately known as the “circle,” were very late going up this year. Some decorations such as the banners/flags that normally hang on the “old fashioned” light poles were not seen and there were generally less displays.

Residents may have to rescue Christmas in Lake Placid next year, similar to them picking up and running with the Halloween event that was almost canceled this year. At least one resident has reached out to Town Administrator Phil Williams about donating items to the town’s décor. June Rosenblum has said she would like to see DeVane Park have more lights and displays. She has even volunteered to donate to the cause. Rosenblum has been shopping on the internet and has seen several pieces she thinks would look nice.

“I found LED angels and unicorns and a sleigh,” she said. “The unicorn looks like a rearing horse. The entire frame is lit, not just an outline. Inflatables wouldn’t work because they fall over when it’s windy. These are sturdy and wouldn’t fall over in the wind and the rain could go right through.”

Rosenblum said she would be willing to buy several of the figures.

Williams advised that folks could contact the town in November 2020. Rosenblum, however, said she is a senior citizen and would like to get the ball rolling.

“This year was a particularly tight budget year; however, Town Council managed to cut the millage rate on its residents from 3.65 mils to 3.50 mils,” Williams told Rosenblum in an email. “Discussions took place at the November council meeting and while everyone agreed we would like to be the best Christmas showcase in Highlands County, it was not achievable this year.”

On Tuesday, Williams said he will get together with Public Utilities Director Harvey Waldron to determine what the town actually wants or needs. The list will be published as soon as it was ready. Williams answered Rosenblum and said the town had plenty of room to store the decorations.

The lack of decorations boiled down to man power and money. Lake Placid Town Council decided not to purchase any extra Christmas decorations this year. Waldron said decorations on Dal Hall Boulevard were held up with receptacles that needed to be replaced for the lights.

“Interlake is lit up the same as last year,” he said. “We are purchasing more of the basic decorations each year, to help fill the air with Christmas spirit along with upgrading Christmas lighting to LEDs as we go. The majority of the Christmas flags that have been on Dal Hall are so faded and worn that we aren’t putting them up.”

The old Bank of America parking lot and drive-through teller parcel on Lakeview Drive, the City of Sebring is slated to purchase, has no asbestos materials according to a recent inspection.

SEBRING — An inspection of former bank drive-through showed no signs of asbestos, clearing the way for the City of Sebring to purchase the property.

At its Dec. 17 meeting, the Sebring City Council tabled its decision on purchasing the old Bank of America parking lot and drive-through teller parcel. The purchase is to provide parking for nearby city-owned properties and for overflow parking for the downtown.

The property at 1960 Lakeview Drive, Lot 5, which is also bordered by Franklin Street, is owned by Sebring Flea Market, LLC and has an assessed and taxable value of $179,598, according to the Highlands County Property Appraiser website.

There is a proposed contract for the city to purchase the property for $200,000. The property was recently appraised at a value of $202,000.

The property purchase was tabled so that an inspection could be performed to determine if the site has any asbestos.

Councilman Charles Lowrance is an owner of the property. The city continues to wait for an opinion from the office of the Florida Commission on Ethics that the sale would be in compliance with the applicable ethics laws.

Assistant City Manager Bob Hoffman said Thursday there was an asbestos study done for Lowrance some time ago (March 4, 2017) and the study was redone and certified (Dec. 27, 2019) for the city. There was no asbestos found in the building.

The city has potential layouts, with an overlay of the existing property, for angled parking and straight-in parking with both designs creating about 140 parking spaces.