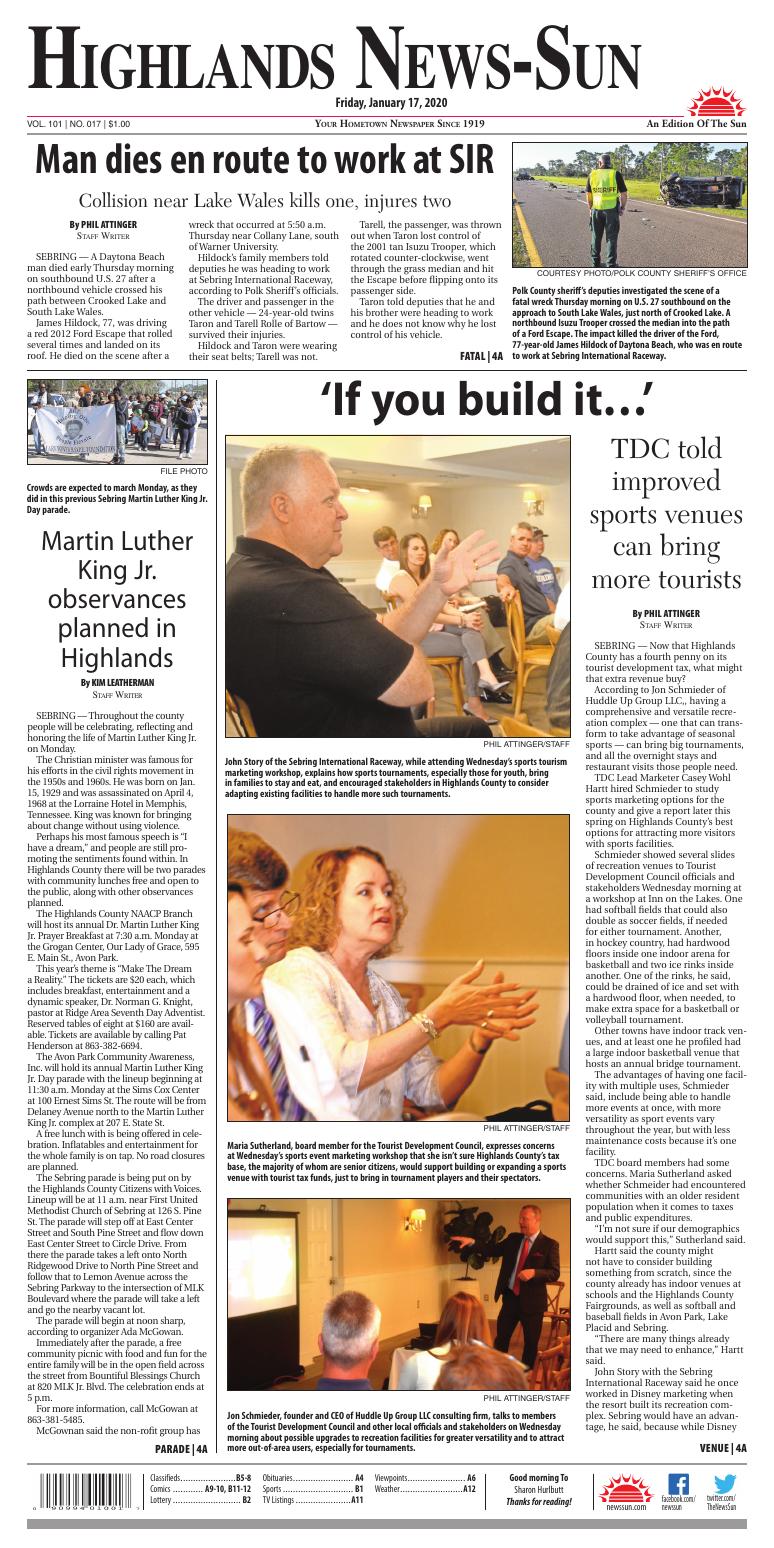 Polk County sheriff’s deputies investigated the scene of a fatal wreck Thursday morning on U.S. 27 southbound on the approach to South Lake Wales, just north of Crooked Lake. A northbound Isuzu Trooper crossed the median into the path of a Ford Escape. The impact killed the driver of the Ford, 77-year-old James Hildock of Daytona Beach, who was en route to work at Sebring International Raceway.

James Hildock, 77, was driving a red 2012 Ford Escape that rolled several times and landed on its roof. He died on the scene after a wreck that occurred at 5:50 a.m. Thursday near Collany Lane, south of Warner University.

Hildock’s family members told deputies he was heading to work at Sebring International Raceway, according to Polk Sheriff’s officials.

The driver and passenger in the other vehicle — 24-year-old twins Taron and Tarell Rolle of Bartow — survived their injuries.

Hildock and Taron were wearing their seat belts; Tarell was not.

Tarell, the passenger, was thrown out when Taron lost control of the 2001 tan Isuzu Trooper, which rotated counter-clockwise, went through the grass median and hit the Escape before flipping onto its passenger side.

Taron told deputies that he and his brother were heading to work and he does not know why he lost control of his vehicle.

Both brothers were transported to Lakeland Regional Medical Center, where they are expected to recover from their injuries.

Polk deputies still have the incident under investigation. They had to close the highway for approximately five hours to gather data and clear debris.

Jon Schmieder, founder and CEO of Huddle Up Group LLC consulting firm, talks to members of the Tourist Development Council and other local officials and stakeholders on Wednesday morning about possible upgrades to recreation facilities for greater versatility and to attract more out-of-area users, especially for tournaments.

John Story of the Sebring International Raceway, while attending Wednesday’s sports tourism marketing workshop, explains how sports tournaments, especially those for youth, bring in families to stay and eat, and encouraged stakeholders in Highlands County to consider adapting existing facilities to handle more such tournaments.

Maria Sutherland, board member for the Tourist Development Council, expresses concerns at Wednesday’s sports event marketing workshop that she isn’t sure Highlands County’s tax base, the majority of whom are senior citizens, would support building or expanding a sports venue with tourist tax funds, just to bring in tournament players and their spectators.

SEBRING — Now that Highlands County has a fourth penny on its tourist development tax, what might that extra revenue buy?

According to Jon Schmieder of Huddle Up Group LLC,, having a comprehensive and versatile recreation complex — one that can transform to take advantage of seasonal sports — can bring big tournaments, and all the overnight stays and restaurant visits those people need.

Schmieder showed several slides of recreation venues to Tourist Development Council officials and stakeholders Wednesday morning at a workshop at Inn on the Lakes. One had softball fields that could also double as soccer fields, if needed for either tournament. Another, in hockey country, had hardwood floors inside one indoor arena for basketball and two ice rinks inside another. One of the rinks, he said, could be drained of ice and set with a hardwood floor, when needed, to make extra space for a basketball or volleyball tournament.

Other towns have indoor track venues, and at least one he profiled had a large indoor basketball venue that hosts an annual bridge tournament.

The advantages of having one facility with multiple uses, Schmieder said, include being able to handle more events at once, with more versatility as sport events vary throughout the year, but with less maintenance costs because it’s one facility.

TDC board members had some concerns. Maria Sutherland asked whether Schmeider had encountered communities with an older resident population when it comes to taxes and public expenditures.

“I’m not sure if our demographics would support this,” Sutherland said.

Hartt said the county might not have to consider building something from scratch, since the county already has indoor venues at schools and the Highlands County Fairgrounds, as well as softball and baseball fields in Avon Park, Lake Placid and Sebring.

“There are many things already that we may need to enhance,” Hartt said.

John Story with the Sebring International Raceway said he once worked in Disney marketing when the resort built its recreation complex. Sebring would have an advantage, he said, because while Disney requires visitors to buy a package lodging deal that could cost $1,000, hospitality in Sebring is a lot cheaper.

“There are so many advantages to what we have here,” Story said. “If we don’t take advantage of it, we’re fools.”

Realtor Jeff Ludwig, also in attendance, had concerns about many of the suggestions.

“The bane of our economic pursuits has been that we pursue things the metro areas have,” Ludwig said. “We have assets other areas don’t have.”

Some of those advantages, he said, include cheap land and movement by Sebring Regional Airport to eventually have commercial passenger service.

Also, both Ludwig and Schmieder pointed to a 120-mile radius around the Sebring area and said other communities that have succeeded in sports tournament event/tourism marketing have tried to draw in teams from that radius.

Dunn said it might take six to seven years to build a new facility. If anyone thinks the county needs one, he said, the time to plan it is now, but the county also needs to improve what it has in the short term.

One short-term improvement Schmieder suggested, as an avid golfer, would have local golf courses trying to draw in as many tournaments as possible.

Ludwig said “everyone and their uncle in Florida has a golf course,” and advised the TDC not to “put a lot of eggs in that basket.”

Schmieder said golf has been “flat” for five years, with fewer new players taking part, and avid players like himself playing fewer rounds.

He also said many municipalities would like to get their golf courses off their balance sheets, the same as municipal aquatics facilities, but not enough kids are swimming.

He’s also seen a move to convert tennis courts to pickleball, with the increase in retirees.

Sebring City Administrator Scott Noethlich, when asked after the meeting about the city’s golf course, said there are no plans to change it.

Aside from the fact that it would affect home prices along Golfview Road, he said the golf course is one of the city’s recreation facilities that makes money. Even if it doesn’t support itself, it brings in something, Noethlich said.

Most of the players are during the week, too, he said, which would leave the facility largely open for weekend tournaments.

Crowds are expected to march Monday, as they did in this previous Sebring Martin Luther King Jr. Day parade.

SEBRING — Throughout the county people will be celebrating, reflecting and honoring the life of Martin Luther King Jr. on Monday.

The Christian minister was famous for his efforts in the civil rights movement in the 1950s and 1960s. He was born on Jan. 15, 1929 and was assassinated on April 4, 1968 at the Lorraine Hotel in Memphis, Tennessee. King was known for bringing about change without using violence.

Perhaps his most famous speech is “I have a dream,” and people are still promoting the sentiments found within. In Highlands County there will be two parades with community lunches free and open to the public, along with other observances planned.

This year’s theme is “Make The Dream a Reality.” The tickets are $20 each, which includes breakfast, entertainment and a dynamic speaker, Dr. Norman G. Knight, pastor at Ridge Area Seventh Day Adventist. Reserved tables of eight at $160 are available. Tickets are available by calling Pat Henderson at 863-382-6694.

A free lunch with is being offered in celebration. Inflatables and entertainment for the whole family is on tap. No road closures are planned.

The Sebring parade is being put on by the Highlands County Citizens with Voices. Lineup will be at 11 a.m. near First United Methodist Church of Sebring at 126 S. Pine St. The parade will step off at East Center Street and South Pine Street and flow down East Center Street to Circle Drive. From there the parade takes a left onto North Ridgewood Drive to North Pine Street and follow that to Lemon Avenue across the Sebring Parkway to the intersection of MLK Boulevard where the parade will take a left and go the nearby vacant lot.

The parade will begin at noon sharp, according to organizer Ada McGowan.

Immediately after the parade, a free community picnic with food and fun for the entire family will be in the open field across the street from Bountiful Blessings Church at 820 MLK Jr. Blvd. The celebration ends at 5 p.m.

McGownan said the non-rofit group has put on the parade for five years.

“My goal is to have one county-wide celebration next year,” McGowan said.

“It’s important because he lived and died for this cause,” she said. “It defeats the purpose of him dying if we don’t keep his dream alive. We need to pass it on to the next generation. We need to stay united — not get united, but stay united.” 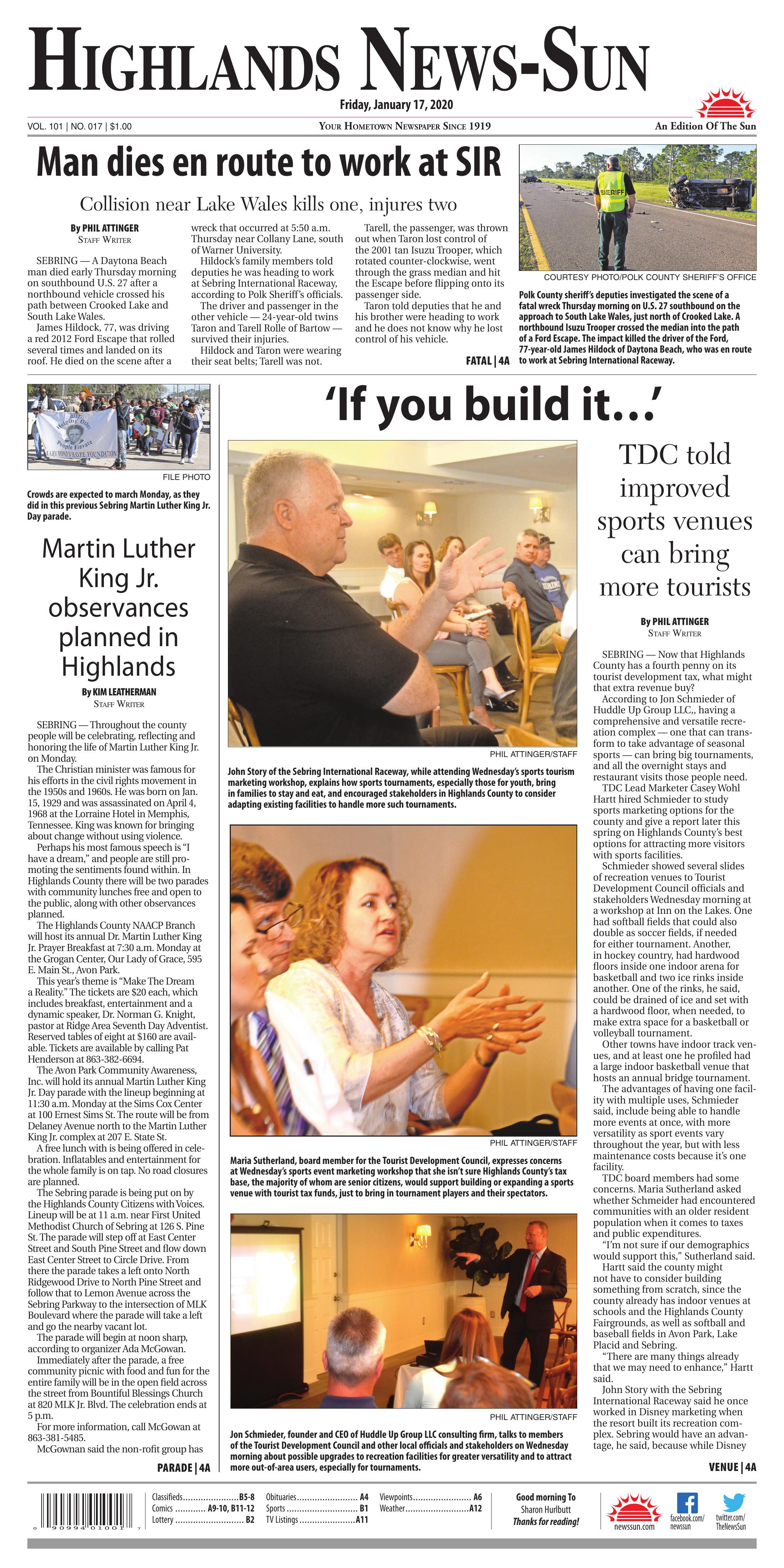