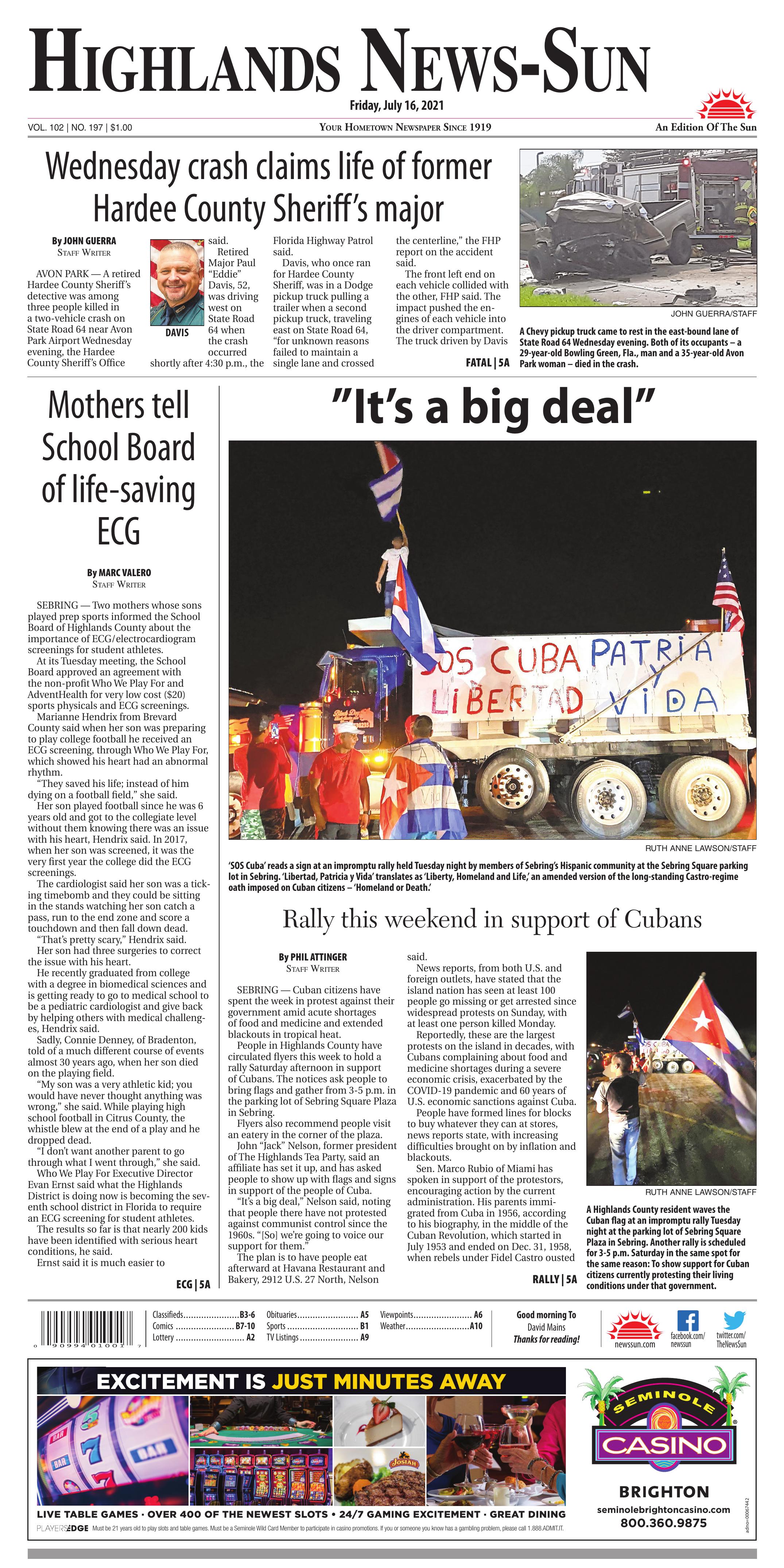 A Chevy pickup truck came to rest in the east-bound lane of State Road 64 Wednesday evening. Both of its occupants – a 29-year-old Bowling Green, Fla., man and a 35-year-old Avon Park woman – died in the crash.

Davis, who once ran for Hardee County Sheriff, was in a Dodge pickup truck pulling a trailer when a second pickup truck, traveling east on State Road 64, “for unknown reasons failed to maintain a single lane and crossed the centerline,” the FHP report on the accident said.

The front left end on each vehicle collided with the other, FHP said. The impact pushed the engines of each vehicle into the driver compartment. The truck driven by Davis ended roof-down on the north grass shoulder of westbound State Road 64; the flatbed trailer he had been towing detached and came to a rest behind Davis’ truck.

The Chevy pickup truck, driven by a 29-year-old man from Bowling Green, ended up in the eastbound lane of State Road 64.

Both drivers were declared deceased at the scene.

Brian Swearingen was driving east on State Road 64 at the time of the crash. He said the eastbound Chevy pickup truck tried to pass a black, eastbound Ford sedan. The female driver of the black Ford said she had given her statement to the FHP and would not comment.

“The Chevy wanted to go around her, and they didn’t judge the distance between the Dodge,” Swearingen said. “The Dodge and the pickup hit head on, 70-75 mph.”

During his career at Hardee County, Davis rose in the ranks from corrections, to patrol, to canine where he handled bloodhounds, and after a brief stint at the Highlands County Sheriff’s Office in 1999, returned to Hardee County.

“He missed us and returned to us as an investigator, working property crimes and narcotics, but his true passion – the majority of his career – was narcotics,” Adler said. As he battled the spread of methamphetamine in his county, Davis became sergeant of the Hardee County Sheriff’s narcotics unit, from there worked up to Head of Investigations of narcotics and property crimes.

After Hardee County Sheriff’s Major Randy Dey passed away on Thanksgiving 2014, Davis worked up to captain and then to his present rank of major, Adler said. “That’s where Davis remained until his retirement in January.

“He was extremely well thought of,” Adler told the Highlands News-Sun. “Eddie was a down-home country boy, rancher, whose dad was with Florida Fish and Game. That’s what gave him his passion for law enforcement. He was a big family man, always talking about his wife Amy and the kids.”

Davis had a humorous way of looking at life, Adler said.

“He would joke, he had a unique country way of using allegories,” he said. “One we were talking about last night was his phrase, ‘Blind as a bull in high grass,’ stuff like that. He had a passion for what he did; everything was 100 percent, whether it was raising family, law enforcement, or working cows.”

An Avon Park tractor trailer driver was involved in a head-on collision just after 2 a.m. Thursday, the FHP said. The unidentified, 28-year-old truck driver was heading north on State Road 29 near State Road 78 in Glades County when a car pulled into his path.

The truck hit a guardrail and came to rest on the east shoulder of State Road 29.

The Avon Park man survived, but the FHP accident report did not state his injuries.

According to the FHP, the car, driven by a 55-year-old Georgetown, Ky., man, veered into the northbound lane and hit the tractor trailer.

The Kentucky man was killed in the accident.

The FHP does not provide the names of deceased accident victims, but do report whether the family members have been notified.

The three fatalities on State Road 64 bring to five the number of people killed – this week alone – in road crashes in Highlands County. One person was killed in a crash on Sunday and another, on Monday.

A Highlands County resident waves the Cuban flag at an impromptu rally Tuesday night at the parking lot of Sebring Square Plaza in Sebring. Another rally is scheduled for 3-5 p.m. Saturday in the same spot for the same reason: To show support for Cuban citizens currently protesting their living conditions under that government.

SEBRING — Cuban citizens have spent the week in protest against their government amid acute shortages of food and medicine and extended blackouts in tropical heat.

People in Highlands County have circulated flyers this week to hold a rally Saturday afternoon in support of Cubans. The notices ask people to bring flags and gather from 3-5 p.m. in the parking lot of Sebring Square Plaza in Sebring.

Flyers also recommend people visit an eatery in the corner of the plaza.

John “Jack” Nelson, former president of The Highlands Tea Party, said an affiliate has set it up, and has asked people to show up with flags and signs in support of the people of Cuba.

“It’s a big deal,” Nelson said, noting that people there have not protested against communist control since the 1960s. “[So] we’re going to voice our support for them.”

The plan is to have people eat afterward at Havana Restaurant and Bakery, 2912 U.S. 27 North, Nelson said.

News reports, from both U.S. and foreign outlets, have stated that the island nation has seen at least 100 people go missing or get arrested since widespread protests on Sunday, with at least one person killed Monday.

Reportedly, these are the largest protests on the island in decades, with Cubans complaining about food and medicine shortages during a severe economic crisis, exacerbated by the COVID-19 pandemic and 60 years of U.S. economic sanctions against Cuba.

People have formed lines for blocks to buy whatever they can at stores, news reports state, with increasing difficulties brought on by inflation and blackouts.

Sen. Marco Rubio of Miami has spoken in support of the protestors, encouraging action by the current administration. His parents immigrated from Cuba in 1956, according to his biography, in the middle of the Cuban Revolution, which started in July 1953 and ended on Dec. 31, 1958, when rebels under Fidel Castro ousted Cuba’s then-president Fulgencio Batista.

Until his death in 2016, Castro remained the head of one-party communist state, which has continued to function that way since his death. His regime had subsidies from the Soviet Union, until the Soviet government collapsed in the early 1990s. NBCNews reports from the island nation this week state that Cuba’s government blames the economic crisis on the 60-year U.S. trade embargo on Cuba and on impacts of the COVID-19 pandemic.

However, China and Vietnam, two communist nations that adopted economic reforms since the Soviet collapse, have used market-based economies to help pull millions of their people out of poverty. Their officials have reportedly advised Cuba to do the same, but Cuba has not.

On Monday, Rubio spoke to the U.S. Senate on the matter, arguing that Cuba’s problems stem not from the embargo but from the single-party Cuban government that controls all influx of money, supplies and humanitarian aid, including vaccines for COVID-19. He argued that dropping the embargo would not change that.

Rubio argued that people in Cuba have a right to protest without being assaulted, arrested or killed; that the U.S. should not loosen sanctions and should help Cubans get internet access, possibly through a satellite-based system; that other countries should lend their diplomatic weight to the issue, and that the U.S. should not tolerate another mass migration from Cuba.

Instead, he said, recent protests started from artists, poets, songwriters, writers, actors and musicians, because the regime came after them.

SEBRING — Two mothers whose sons played prep sports informed the School Board of Highlands County about the importance of ECG/electrocardiogram screenings for student athletes.

At its Tuesday meeting, the School Board approved an agreement with the non-profit Who We Play For and AdventHealth for very low cost ($20) sports physicals and ECG screenings.

Marianne Hendrix from Brevard County said when her son was preparing to play college football he received an ECG screening, through Who We Play For, which showed his heart had an abnormal rhythm.

“They saved his life; instead of him dying on a football field,” she said.

Her son played football since he was 6 years old and got to the collegiate level without them knowing there was an issue with his heart, Hendrix said. In 2017, when her son was screened, it was the very first year the college did the ECG screenings.

The cardiologist said her son was a ticking timebomb and they could be sitting in the stands watching her son catch a pass, run to the end zone and score a touchdown and then fall down dead.

Her son had three surgeries to correct the issue with his heart.

He recently graduated from college with a degree in biomedical sciences and is getting ready to go to medical school to be a pediatric cardiologist and give back by helping others with medical challenges, Hendrix said.

Sadly, Connie Denney, of Bradenton, told of a much different course of events almost 30 years ago, when her son died on the playing field.

“My son was a very athletic kid; you would have never thought anything was wrong,” she said. While playing high school football in Citrus County, the whistle blew at the end of a play and he dropped dead.

“I don’t want another parent to go through what I went through,” she said.

Who We Play For Executive Director Evan Ernst said what the Highlands District is doing now is becoming the seventh school district in Florida to require an ECG screening for student athletes.

The results so far is that nearly 200 kids have been identified with serious heart conditions, he said.

Ernst said it is much easier to implement this program in a smaller district than a large county. Orange County is the eighth largest school district in the nation. They just required the ECG a few months ago and already identified 12 students who had surgery that saved their lives already.

“There are things we still need to figure out,” he said. “We will have to work with AdventHealth to figure out the solution, which we have done in other districts, for the most vulnerable kids. What is the plan if they have no insurance?”

School Board Attorney John McClure said the ECG screening may not be in place for the upcoming fall sports.

He noted that the original contract had the School District covering the cost for those who couldn’t afford it, but the contract was revised with Who We Play For covering those costs.

In 2014, Who We Play For (WWPF) was established as a 501©(3) (non-profit) and began partnering with schools across the state of Florida and six other states, to provide affordable ECG screenings for their students.