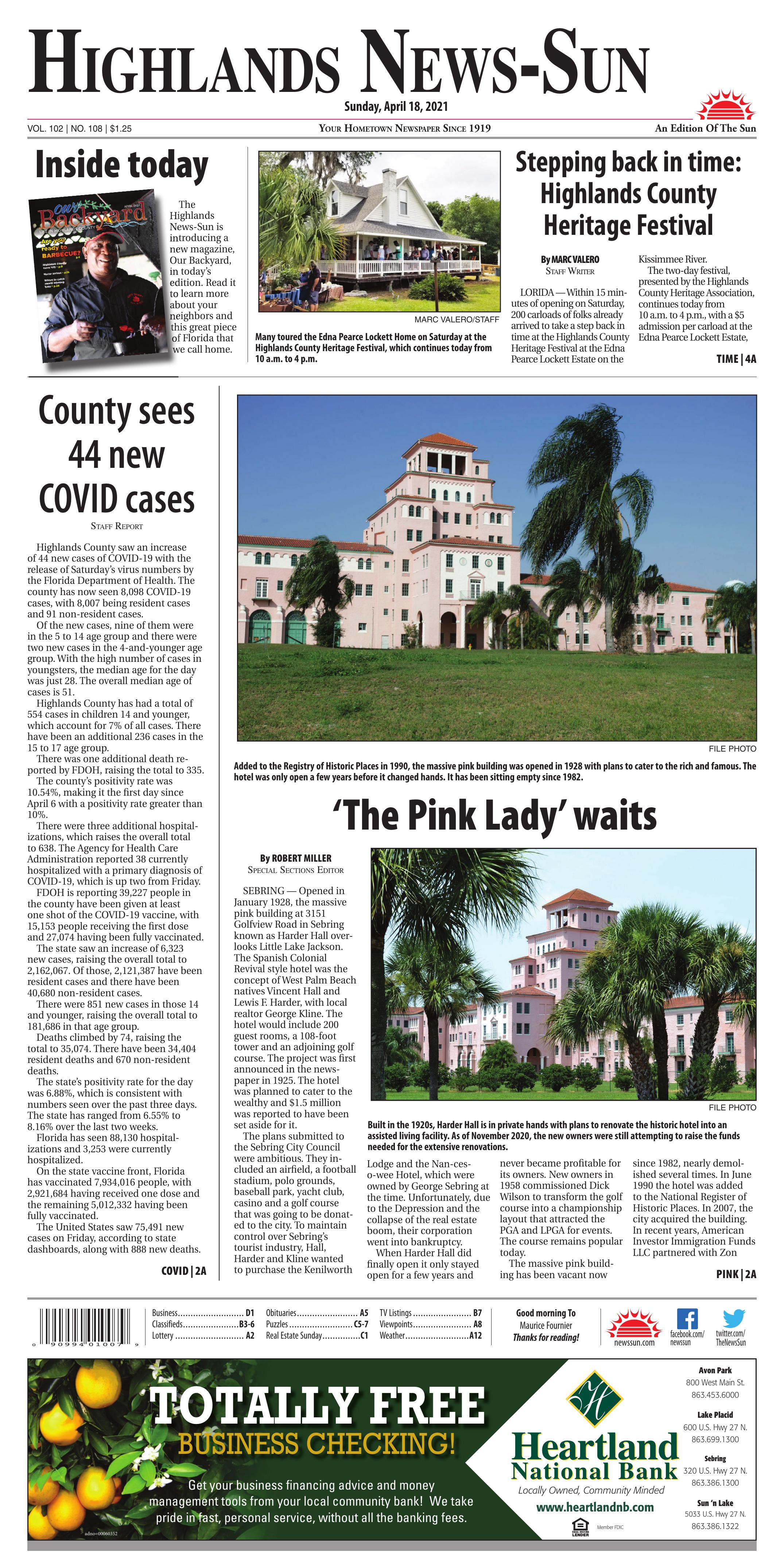 Many toured the Edna Pearce Lockett Home at the Highlands County Heritage Festival.

From left: Tom Tucker and Penny Trull, both of Englewood, dressed for the past at the Highlands County Heritage Festival.

LORIDA — Within 15 minutes of opening on Saturday, 200 carloads of folks already arrived to take a step back in time at the Highlands County Heritage Festival at the Edna Pearce Lockett Estate on the Kissimmee River.

The two-day festival, presented by the Highlands County Heritage Association, continues today from 10 a.m. to 4 p.m., with a $5 admission per carload at the Edna Pearce Lockett Estate, 98 County Rd 721, Lorida. It’s just off U.S. 98 before crossing the river between Highlands and Okeechobee counties.

At the Cow Hunter Camp, see the Florida cattle, horses, and farm implements display. Relive the past as cow hunters bring to life migration in old Florida.

Kissimmee River Boat Cruises will be available during the festival. Tickets can be purchased at the boat dock.

Highlands County Commissioner Kevin Robert was among the many local government officials who attended the festival Saturday.

After seeing the inside of the Lockett Home, Roberts said, “It’s beautiful; I love seeing all the history of it; I love history and I love the way it has been preserved.”

There was a time when the home and property were in great deterioration, but the current owner, Paul “Butch” Thompson, did a great job to preserve it after he purchased the property, Roberts said.

All five of the County Commissioners are here, he said.

Roberts said he thought he would be among the first the arrive at the festival, but was shocked when they already had three or four rows of cars parked.

“The older I get, the more I like history and I love the history of Highlands County.” he said.

One room in the Lockett Home currently has artwork on display from Avon Park High School students and the Avon Park Historical Society has an apron display in the kitchen.

Heartland Cultural Alliance member Gaylen Thomas noted this is a first-time event at the Lockett Estate.

She said Jim Pollard with the Sebring Historical Society conceived the idea, which was organized in six months.

Pollard and others created the Highlands County Heritage Association, Thomas said. “This is the first year and look how big it is. So they want to keep this up as a yearly recognition.”

Thomas also noted Thompson’s efforts to make many improvements on the property.

Added to the Registry of Historic Places in 1990, the massive pink building was opened in 1928 with plans to cater to the rich and famous. The hotel was only open a few years before it changed hands. It has been sitting empty since 1982.

The 6,300-yard Harder Hall Golf Course was designed by famed golf course designer Dick Wilson in 1958. Golfers have played more than 30,000 rounds of golf on the course each year.

Built in the 1920s, Harder Hall is in private hands with plans to renovate the historic hotel into an assisted living facility. As of November 2020, the new owners were still attempting to raise the funds needed for the extensive renovations.

SEBRING — Opened in January 1928, the massive pink building at 3151 Golfview Road in Sebring known as Harder Hall overlooks Little Lake Jackson. The Spanish Colonial Revival style hotel was the concept of West Palm Beach natives Vincent Hall and Lewis F. Harder, with local realtor George Kline. The hotel would include 200 guest rooms, a 108-foot tower and an adjoining golf course. The project was first announced in the newspaper in 1925. The hotel was planned to cater to the wealthy and $1.5 million was reported to have been set aside for it.

The plans submitted to the Sebring City Council were ambitious. They included an airfield, a football stadium, polo grounds, baseball park, yacht club, casino and a golf course that was going to be donated to the city. To maintain control over Sebring’s tourist industry, Hall, Harder and Kline wanted to purchase the Kenilworth Lodge and the Nan-ces-o-wee Hotel, which were owned by George Sebring at the time. Unfortunately, due to the Depression and the collapse of the real estate boom, their corporation went into bankruptcy.

When Harder Hall did finally open it only stayed open for a few years and never became profitable for its owners. New owners in 1958 commissioned Dick Wilson to transform the golf course into a championship layout that attracted the PGA and LPGA for events. The course remains popular today.

The massive pink building has been vacant now since 1982, nearly demolished several times. In June 1990 the hotel was added to the National Register of Historic Places. In 2007, the city acquired the building. In recent years, American Investor Immigration Funds LLC partnered with Zon Living Concepts to convert the historic hotel into an assisted living facility. Zon Living Concepts, which owns an assisted living facility in Indian Harbour Beach, began raising funds for the project by selling bonds. As of November 2020, the company had been unable to raise the funds because of a saturated bond market.

Nearly as famous as the celebrities who have stayed in the hotel, Harder Hall’s ghost stories remain popular. One legend that has persisted over the years involves a previous owner who passed away in the hotel and still haunts the abandoned building. The fact that the story is false doesn’t deter would-be ghost hunters and vandals, however. A fence was erected around the property to keep them out.

A product of the Florida land boom of the 1920s, Harder Hall was going to cater to the wealthy and become the “Coral Gables of Central Florida.” Today, it sits empty on the shore of Little Lake Jackson, awaiting the day that someone is able to restore it to the glory it once had, even if it was for only a short while.

The Highlands News-Sun is introducing a new magazine, Our Backyard, in today’s edition. Read it to learn more about your neighbors and this great piece of Florida that we call home.

Highlands County saw an increase of 44 new cases of COVID-19 with the release of Saturday’s virus numbers by the Florida Department of Health. The county has now seen 8,098 COVID-19 cases, with 8,007 being resident cases and 91 non-resident cases.

Of the new cases, nine of them were in the 5 to 14 age group and there were two new cases in the 4-and-younger age group. With the high number of cases in youngsters, the median age for the day was just 28. The overall median age of cases is 51.

Highlands County has had a total of 554 cases in children 14 and younger, which account for 7% of all cases. There have been an additional 236 cases in the 15 to 17 age group.

There was one additional death reported by FDOH, raising the total to 335.

There were three additional hospitalizations, which raises the overall total to 638. The Agency for Health Care Administration reported 38 currently hospitalized with a primary diagnosis of COVID-19, which is up two from Friday.

FDOH is reporting 39,227 people in the county have been given at least one shot of the COVID-19 vaccine, with 15,153 people receiving the first dose and 27,074 having been fully vaccinated.

The state’s positivity rate for the day was 6.88%, which is consistent with numbers seen over the past three days. The state has ranged from 6.55% to 8.16% over the last two weeks.

Florida has seen 88,130 hospitalizations and 3,253 were currently hospitalized.

The Centers for Disease Control and Prevention is reporting nearly 206 million vaccine doses have been given in the country, with 39% of the population having received at least dose and 24.8% of the population is fully vaccinated.

Among adults, the vaccination rates are 49.7% for at least one dose and 31.8% of the adult population has received either both shots or one shot of the Johnson & Johnson vaccine.

Nearly two-thirds of all seniors in the United States (65.3%) have been fully vaccinated.

According to the Johns Hopkins University Center for Systems Science and Engineering, there have been 31.6 million cases and 566,863 deaths in the United States.