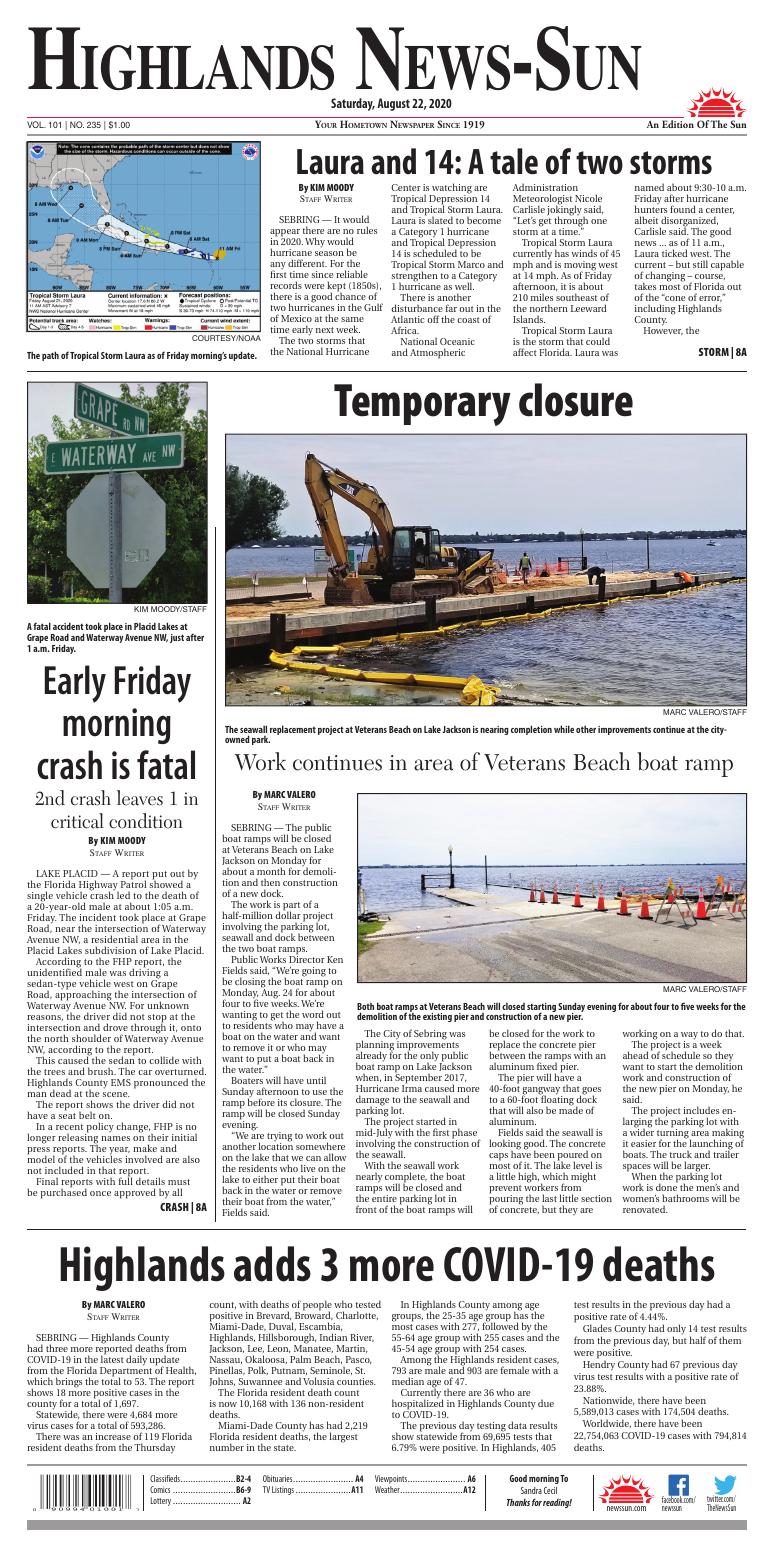 The path of Tropical Storm Laura as of Friday morning’s update.

SEBRING — It would appear there are no rules in 2020. Why would hurricane season be any different. For the first time since reliable records were kept (1850s), there is a good chance of two hurricanes in the Gulf of Mexico at the same time early next week.

There is another disturbance far out in the Atlantic off the coast of Africa.

National Oceanic and Atmospheric Administration Meteorologist Nicole Carlisle jokingly said, “Let’s get through one storm at a time.”

Tropical Storm Laura currently has winds of 45 mph and is moving west at 14 mph. As of Friday afternoon, it is about 210 miles southeast of the northern Leeward Islands.

Tropical Storm Laura is the storm that could affect Florida. Laura was named about 9:30-10 a.m. Friday after hurricane hunters found a center, albeit disorganized, Carlisle said. The good news ... as of 11 a.m., Laura ticked west. The current – but still capable of changing – course, takes most of Florida out of the “cone of error,” including Highlands County.

However, the Panhandle could still face a Category 1 hurricane early next week. If Laura stays on course, she is forecast to hit the northeastern Gulf Coast region, Carlisle said.

Because of the storm’s disorganized center, “it makes it harder on the computer models to forecast. In a day or so when it (TS Laura) gets its act together, we will have more confidence of the forecast,” she said.

By Monday or into Monday night, Highlands County could feel some light effects of the storm. Carlisle said the county could get a few more showers, including thunderstorms and some breezy conditions. The Highlands County Board of County Commission will be handing out sand bags from 7 a.m. to 6:30 p.m. today. Individuals can get 10 empty bags to fill. The staff will deliver the bags to the car at:

Individuals should bring their own shovels to fill the bags. The sand for filling will be at:

With 2020 being what is is and the possibility of two storms heading to the southern United States, some have asked if the two storms could combine and form a storm of epic proportions.

“They don’t combine to form a super storm,” Carlisle said. “One will kill the other off through shearing. It’s hard to say which one that would be right now.”

NOAA’s August update of the tropics increased the forecast to “extremely active. This has proven to be the case. Laura set another record by reaching its letter designation the earliest in the season. Luis held the record on Aug. 29, 1995, according to Accuweather. There were eight other storms to set those records this season, including Isaias, just a few weeks ago.

The seawall replacement project at Veterans Beach on Lake Jackson is nearing completion while other improvements continue at the city-owned park.

Both boat ramps at Veterans Beach will closed starting Sunday evening for about four to five weeks for the demolition of the existing pier and construction of a new pier.

SEBRING — The public boat ramps will be closed at Veterans Beach on Lake Jackson on Monday for about a month for demolition and then construction of a new dock.

The work is part of a half-million dollar project involving the parking lot, seawall and dock between the two boat ramps.

Public Works Director Ken Fields said, “We’re going to be closing the boat ramp on Monday, Aug. 24 for about four to five weeks. We’re wanting to get the word out to residents who may have a boat on the water and want to remove it or who may want to put a boat back in the water.”

Boaters will have until Sunday afternoon to use the ramp before its closure. The ramp will be closed Sunday evening.

“We are trying to work out another location somewhere on the lake that we can allow the residents who live on the lake to either put their boat back in the water or remove their boat from the water,” Fields said.

The City of Sebring was planning improvements already for the only public boat ramp on Lake Jackson when, in September 2017, Hurricane Irma caused more damage to the seawall and parking lot.

The project started in mid-July with the first phase involving the construction of the seawall.

The pier will have a 40-foot gangway that goes to a 60-foot floating dock that will also be made of aluminum.

Fields said the seawall is looking good. The concrete caps have been poured on most of it. The lake level is a little high, which might prevent workers from pouring the last little section of concrete, but they are working on a way to do that.

The project is a week ahead of schedule so they want to start the demolition work and construction of the new pier on Monday, he said.

The project includes enlarging the parking lot with a wider turning area making it easier for the launching of boats. The truck and trailer spaces will be larger.

When the parking lot work is done the men’s and women’s bathrooms will be renovated.

SEBRING — Highlands County had three more reported deaths from COVID-19 in the latest daily update from the Florida Department of Health, which brings the total to 53. The report shows 18 more positive cases in the county for a total of 1,697.

Miami-Dade County has had 2,219 Florida resident deaths, the largest number in the state.

Among the Highlands resident cases, 793 are male and 903 are female with a median age of 47.

Currently there are 36 who are hospitalized in Highlands County due to COVID-19.

The previous day testing data results show statewide from 69,695 tests that 6.79% were positive. In Highlands, 405 test results in the previous day had a positive rate of 4.44%.

Glades County had only 14 test results from the previous day, but half of them were positive.

Hendry County had 67 previous day virus test results with a positive rate of 23.88%.

A 20-year-old male entered the trees and shrubs Friday morning. His car overturned, ending in a fatality.

Grape Road and Waterway Avenue NW was the site of a fatal wreck on Friday morning.

A motorcyclist was taken by helicopter to get treatment after a crash on Lake June Road.

LAKE PLACID — A report put out by the Florida Highway Patrol showed a single vehicle crash led to the death of a 20-year-old male at about 1:05 a.m. Friday. The incident took place at Grape Road, near the intersection of Waterway Avenue NW, a residential area in the Placid Lakes subdivision of Lake Placid.

This caused the sedan to collide with the trees and brush. The car overturned. Highlands County EMS pronounced the man dead at the scene.

The report shows the driver did not have a seat belt on.

In a recent policy change, FHP is no longer releasing names on their initial press reports. The year, make and model of the vehicles involved are also not included in that report.

Final reports with full details must be purchased once approved by all supervisors. The process can take from 7-70 days.

According to the unofficial records kept by the Highlands News-Sun, there have been 17 fatalities on Highlands County roads since the new year. FHP has reported three fatalities this month in the county.

In a separate crash at about 9:20 a.m., a 64-year-old man was driving his motorcycle on east Lake June Road west of Piney Point Drive, according to the FHP crash report. The unidentified man approached the left hand curve on Lake June Road and failed to negotiate it. The motorcycle traveled off the shoulder on the south edge of the road.

The motorcycle turned onto its left side. The driver was taken by helicopter for treatment in critical condition. {span}Engine 41, Medic 36, 38, and Battalion 2 were on scene from Highlands County Fire Rescue. 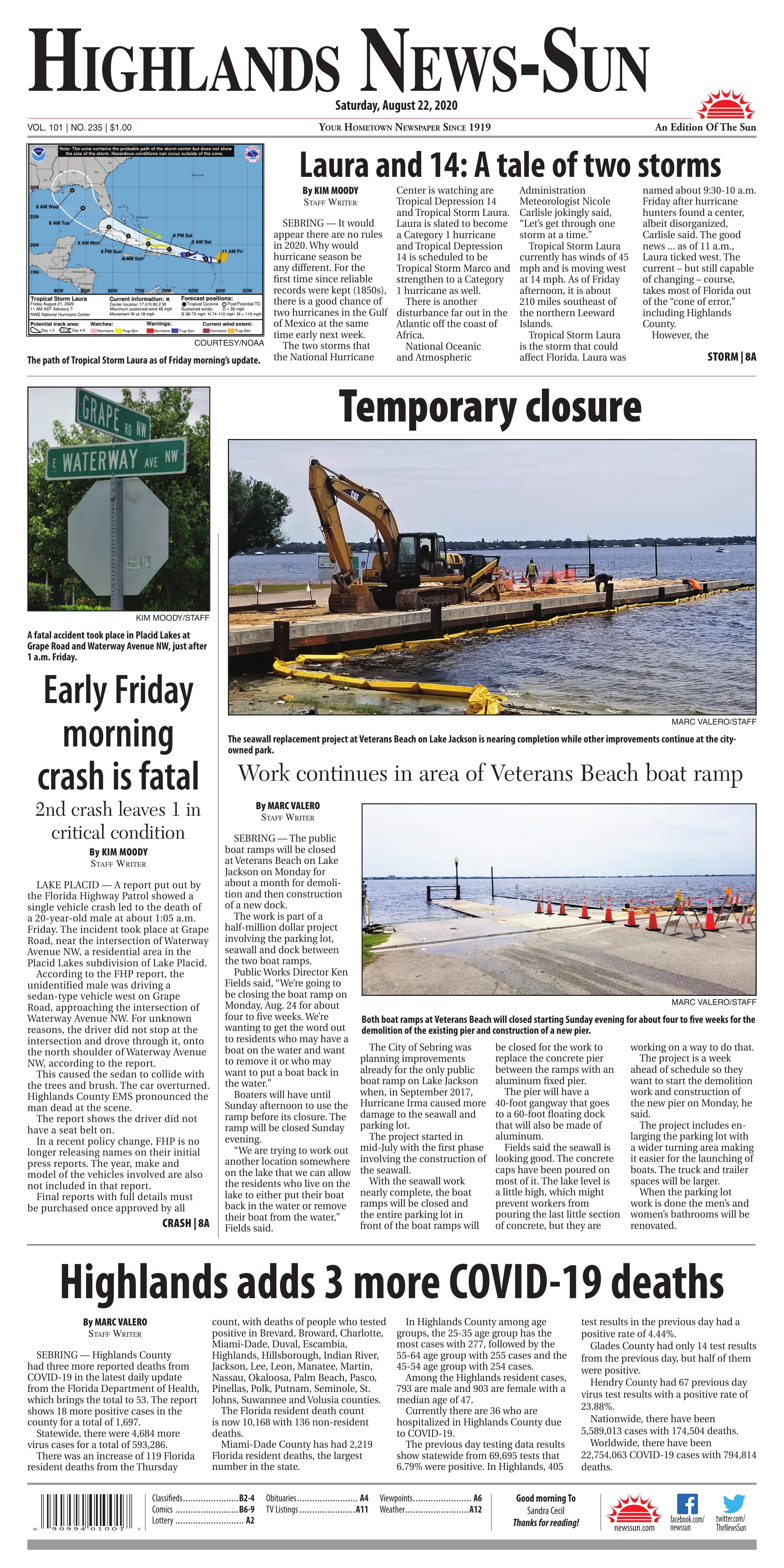