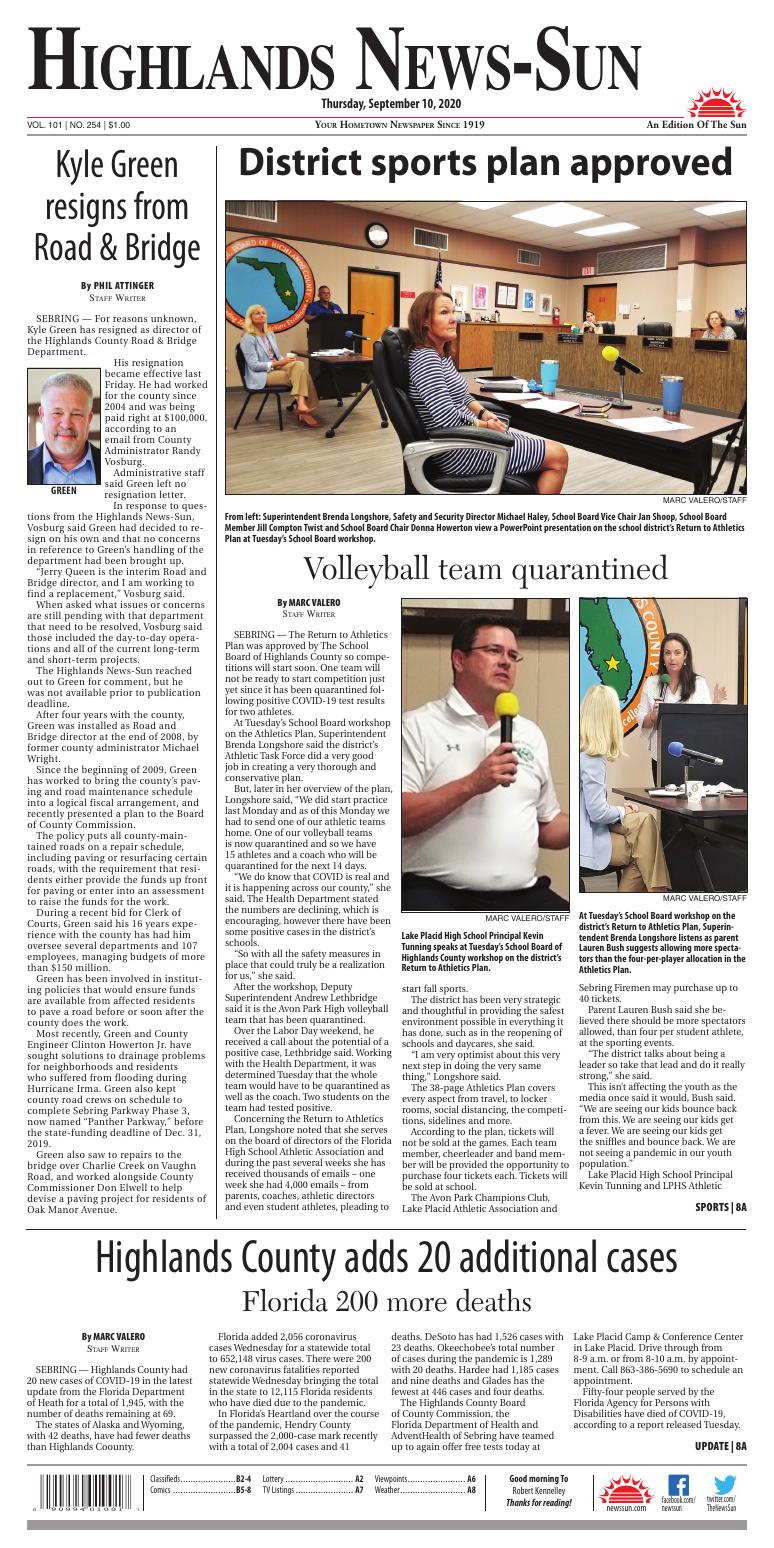 At Tuesday’s School Board workshop on the district’s Return to Athletics Plan, Superintendent Brenda Longshore listens as parent Lauren Bush suggests allowing more spectators than the four-per-player allocation in the Athletics Plan.

SEBRING — The Return to Athletics Plan was approved by The School Board of Highlands County so competitions will start soon. One team will not be ready to start competition just yet since it has been quarantined following positive COVID-19 test results for two athletes.

At Tuesday’s School Board workshop on the Athletics Plan, Superintendent Brenda Longshore said the district’s Athletic Task Force did a very good job in creating a very thorough and conservative plan.

But, later in her overview of the plan, Longshore said, “We did start practice last Monday and as of this Monday we had to send one of our athletic teams home. One of our volleyball teams is now quarantined and so we have 15 athletes and a coach who will be quarantined for the next 14 days.

“We do know that COVID is real and it is happening across our county,” she said. The Health Department stated the numbers are declining, which is encouraging, however there have been some positive cases in the district’s schools.

“So with all the safety measures in place that could truly be a realization for us,” she said.

After the workshop, Deputy Superintendent Andrew Lethbridge said it is the Avon Park High volleyball team that has been quarantined.

Over the Labor Day weekend, he received a call about the potential of a positive case, Lethbridge said. Working with the Health Department, it was determined Tuesday that the whole team would have to be quarantined as well as the coach. Two students on the team had tested positive.

Concerning the Return to Athletics Plan, Longshore noted that she serves on the board of directors of the Florida High School Athletic Association and during the past several weeks she has received thousands of emails – one week she had 4,000 emails – from parents, coaches, athletic directors and even student athletes, pleading to start fall sports.

The district has been very strategic and thoughtful in providing the safest environment possible in everything it has done, such as in the reopening of schools and daycares, she said.

“I am very optimist about this very next step in doing the very same thing,” Longshore said.

The 38-page Athletics Plan covers every aspect from travel, to locker rooms, social distancing, the competitions, sidelines and more.

According to the plan, tickets will not be sold at the games. Each team member, cheerleader and band member will be provided the opportunity to purchase four tickets each. Tickets will be sold at school.

Parent Lauren Bush said she believed there should be more spectators allowed, than four per student athlete, at the sporting events.

“The district talks about being a leader so take that lead and do it really strong,” she said.

Lake Placid High School Principal Kevin Tunning and LPHS Athletic Director Jason Holden, who are both on the district’s Athletic Task Force, responded that the plan’s focus was to have safe competitions for the athletes and coaches.

Holden said the goal of the Athletic Plan was not to get people to the sporting events. The goal was to just be able to play and not to affect the health of our schools, he said.

“We don’t want schools to get shut down because an outbreak occurred at an athletic event,” he said. “We want the families to be there to watch them. That is what that number is based on,” Holden said, referring to the four spectators per athlete.

SEBRING — Highlands County had 20 new cases of COVID-19 in the latest update from the Florida Department of Heath for a total of 1,945, with the number of deaths remaining at 69.

The states of Alaska and Wyoming, with 42 deaths, have had fewer deaths than Highlands Coounty.

Florida added 2,056 coronavirus cases Wednesday for a statewide total to 652,148 virus cases. There were 200 new coronavirus fatalities reported statewide Wednesday bringing the total in the state to 12,115 Florida residents who have died due to the pandemic.

In Florida’s Heartland over the course of the pandemic, Hendry County surpassed the 2,000-case mark recently with a total of 2,004 cases and 41 deaths. DeSoto has had 1,526 cases with 23 deaths. Okeechobee’s total number of cases during the pandemic is 1,289 with 20 deaths. Hardee had 1,185 cases and nine deaths and Glades has the fewest at 446 cases and four deaths.

The Highlands County Board of County Commission, the Florida Department of Health and AdventHealth of Sebring have teamed up to again offer free tests today at Lake Placid Camp & Conference Center in Lake Placid. Drive through from 8-9 a.m. or from 8-10 a.m. by appointment. Call 863-386-5690 to schedule an appointment.

Fifty-four people served by the Florida Agency for Persons with Disabilities have died of COVID-19, according to a report released Tuesday.

In all, 1,196 Agency for Persons with Disabilities beneficiaries have tested positive for the virus, with 803 having recovered, said Melanie Etters, an agency spokeswoman.

The agency report also shows that 353 workers at group homes or private institutions that care for people with intellectual and developmental disabilities have tested positive for the virus, and six of those workers have died.

His resignation became effective last Friday. He had worked for the county since 2004 and was being paid right at $100,000, according to an email from County Administrator Randy Vosburg.

In response to questions from the Highlands News-Sun, Vosburg said Green had decided to resign on his own and that no concerns in reference to Green’s handling of the department had been brought up.

“Jerry Queen is the interim Road and Bridge director, and I am working to find a replacement,” Vosburg said.

When asked what issues or concerns are still pending with that department that need to be resolved, Vosburg said those included the day-to-day operations and all of the current long-term and short-term projects.

The Highlands News-Sun reached out to Green for comment, but he was not available prior to publication deadline.

After four years with the county, Green was installed as Road and Bridge director at the end of 2008, by former county administrator Michael Wright.

Since the beginning of 2009, Green has worked to bring the county’s paving and road maintenance schedule into a logical fiscal arrangement, and recently presented a plan to the Board of County Commission.

The policy puts all county-maintained roads on a repair schedule, including paving or resurfacing certain roads, with the requirement that residents either provide the funds up front for paving or enter into an assessment to raise the funds for the work.

During a recent bid for Clerk of Courts, Green said his 16 years experience with the county has had him oversee several departments and 107 employees, managing budgets of more than $150 million.

Green has been involved in instituting policies that would ensure funds are available from affected residents to pave a road before or soon after the county does the work.

Green also saw to repairs to the bridge over Charlie Creek on Vaughn Road, and worked alongside County Commissioner Don Elwell to help devise a paving project for residents of Oak Manor Avenue. 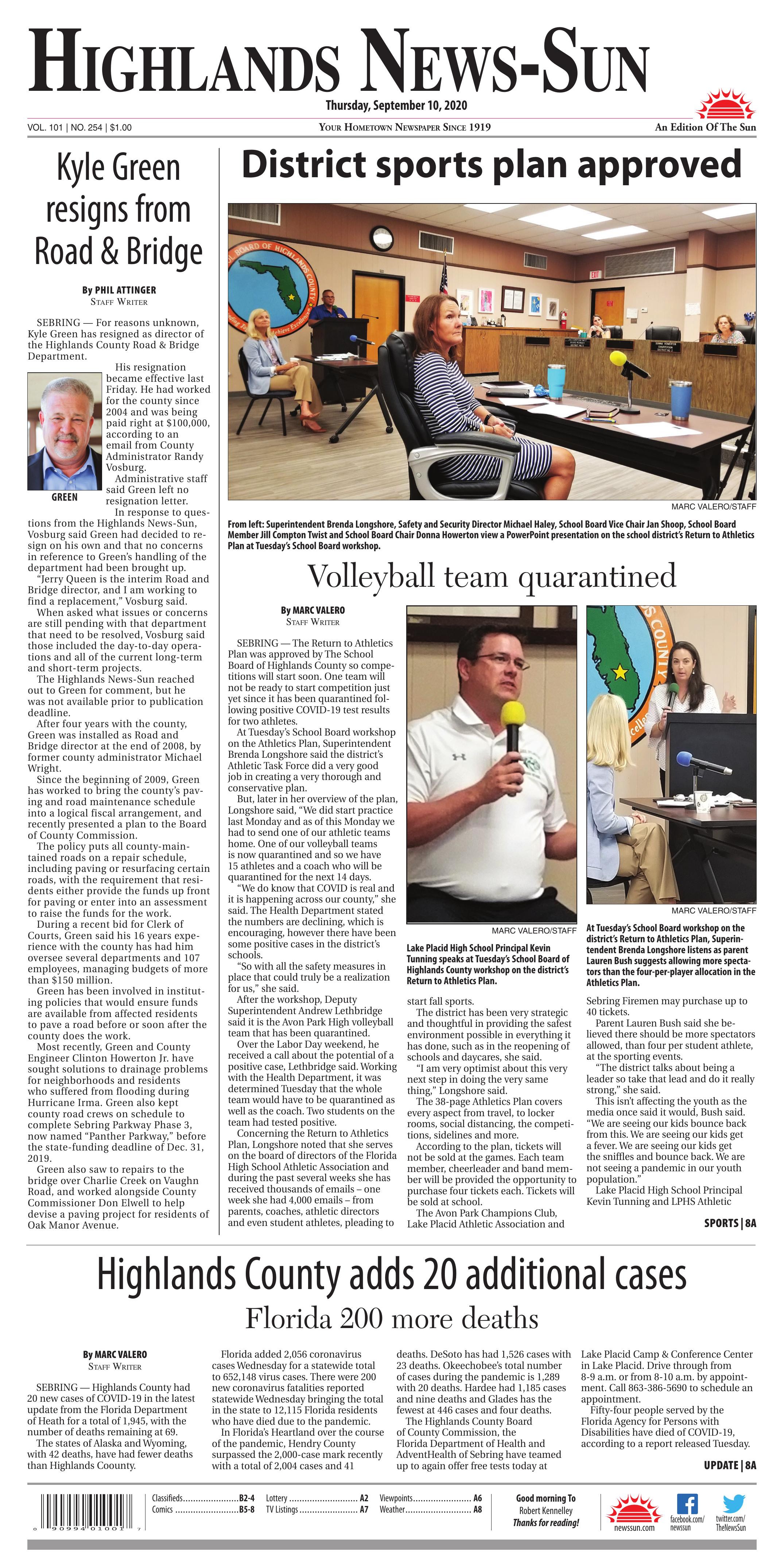