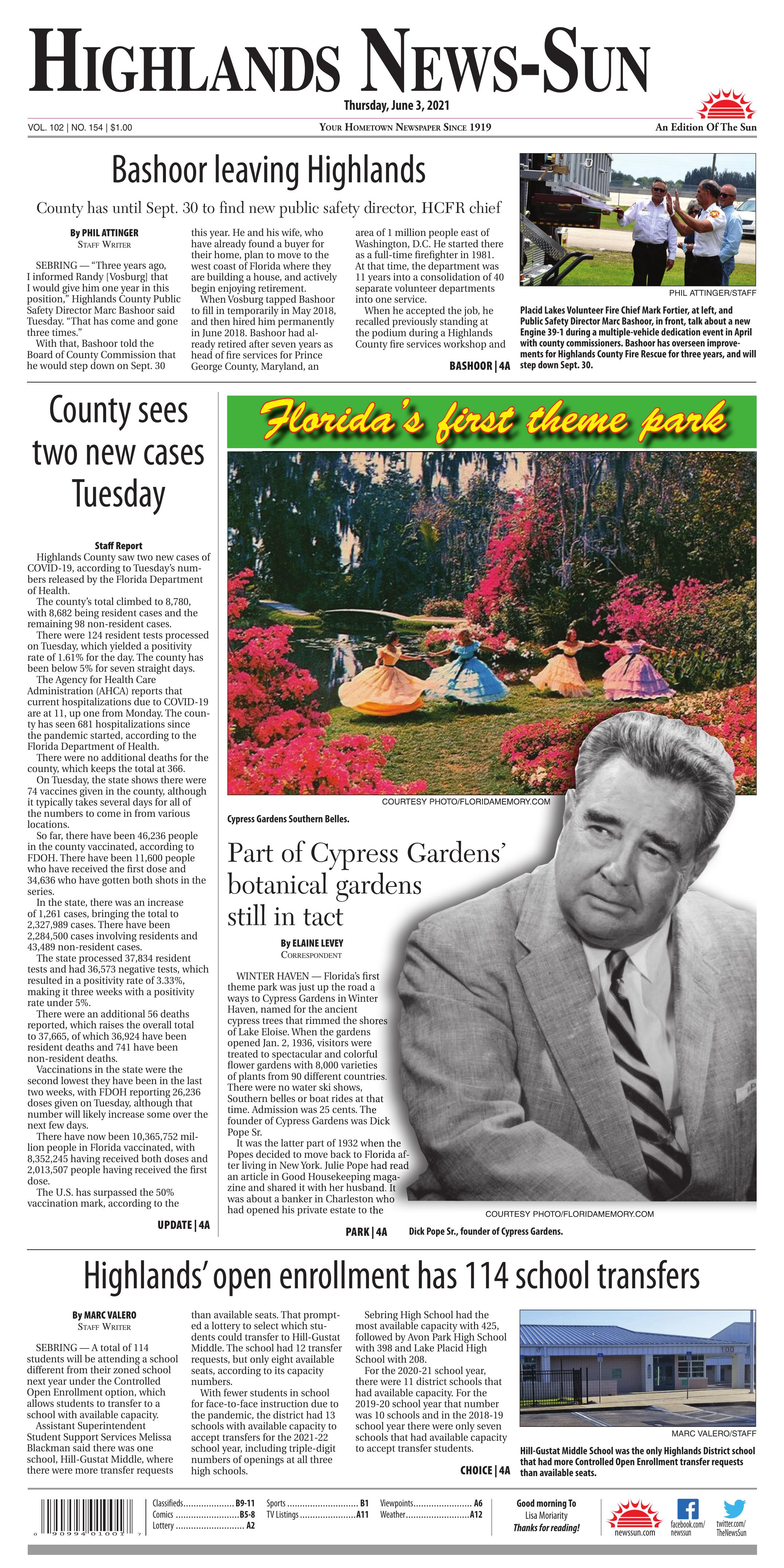 Placid Lakes Volunteer Fire Chief Mark Fortier, at left, and Public Safety Director Marc Bashoor, in front, talk about a new Engine 39-1 during a multiple-vehicle dedication event in April with county commissioners. Bashoor has overseen improvements for Highlands County Fire Rescue for three years, and will step down Sept. 30.

SEBRING — “Three years ago, I informed Randy [Vosburg] that I would give him one year in this position,” Highlands County Public Safety Director Marc Bashoor said Tuesday. “That has come and gone three times.”

With that, Bashoor told the Board of County Commission that he would step down on Sept. 30 this year. He and his wife, who have already found a buyer for their home, plan to move to the west coast of Florida where they are building a house, and actively begin enjoying retirement.

When Vosburg tapped Bashoor to fill in temporarily in May 2018, and then hired him permanently in June 2018. Bashoor had already retired after seven years as head of fire services for Prince George County, Maryland, an area of 1 million people east of Washington, D.C. He started there as a full-time firefighter in 1981. At that time, the department was 11 years into a consolidation of 40 separate volunteer departments into one service.

When he accepted the job, he recalled previously standing at the podium during a Highlands County fire services workshop and claiming it’s not that hard to combine fire departments.

“I appreciate you calling me on the carpet,” Bashoor said.

On Tuesday, via social media, he called out those who had rumored him as leaving for the Atlantic Coast, for taking another job — which he said he is not — or believing he would stay longer than this.

“Well, those of you who had the bet on five years will have missed the mark by a few months,” Bashoor posted.

Since he started with the county, Bashoor has overseen implementation of the Fitch Study, funded by a countywide fire assessment, and facilitated by consolidation, integration and standardization among the various volunteer departments, including adding living quarters or rebuilding certain fire stations to accommodate additional full-time fire personnel.

Highlands County Fire Services was established on Oct. 2, 2018, with the first full-time firefighters hired in January 2019. Fire and EMS integrated in October 2019 and the next two months after that saw planning start on five construction projects, orders placed for four new fire engines and nine new employees hired: three for a fire/EMS station and six in EMS only.

The COVID-19 pandemic delayed much of the construction, hiring and upgrades, but April saw the county bring in four new engines, which were presented to the county commission on April 16 at the Sebring International Raceway.

Bashoor reported to commissioners in May that the county’s first countywide Insurance Services Office (ISO) rating brought down insurance rates on many households where additional firefighters, stations and protocols could guarantee fire response for people previously not covered by 24-hour fire stations.

Streamlined software applications, Bashoor said, will also make it possible for the county to integrate the call records from the 10 different volunteer departments, making it easier for the county to provide complete response data for future grant applications to assist in expansion and improvements to their system.

WINTER HAVEN — Florida’s first theme park was just up the road a ways to Cypress Gardens in Winter Haven, named for the ancient cypress trees that rimmed the shores of Lake Eloise. When the gardens opened Jan. 2, 1936, visitors were treated to spectacular and colorful flower gardens with 8,000 varieties of plants from 90 different countries. There were no water ski shows, Southern belles or boat rides at that time. Admission was 25 cents. The founder of Cypress Gardens was Dick Pope Sr.

It was the latter part of 1932 when the Popes decided to move back to Florida after living in New York. Julie Pope had read an article in Good Housekeeping magazine and shared it with her husband. It was about a banker in Charleston who had opened his private estate to the public to view his manicured flower gardens and charged 25 cents admission. He had taken in $36,000 in one year, a big sum in those days. This was the inspiration and vision for Cypress Gardens.

As Dick Pope thought about the article, he said, “Here is a business where you don’t have to sell anything. You are charging the public just to look — at plants! How can it be anything but successful?” He liked the idea and was instantly inspired.

Julie Pope also liked the idea. She knew and loved plants and had a “green thumb” while her husband knew nothing about plants. But, Julie was confident that her husband would know just what to do. He was a professional promoter, expert at marketing, flamboyant showman and salesman.

The Popes were planning to rebuild the canals on a former Yacht Club on Lake Eloise on 16 acres. The idea of beautiful flower gardens appealed to both of them.

When they began talking about their new garden project in the community, they were met with negativity. “It’s nothing but a swamp,” the people said and Dick Pope was called “Swami of the Swamp.” Even the town council withdrew their support. People of the press laughed at the idea of building a tropical garden in the middle of a swamp. But nothing could change their mind.

Mr. Pope and his wife Julie began working alongside laborers in the muck, toiling in the hot sun and humidity, cutting and hacking, digging canals, planting flowers, creating and designing landscapes, scenes and paths. The gardens would take four years to complete and would expand from 16 acres to 200 acres.

Dick Pope worked tirelessly and persistently in promoting the garden project from the start. He designed and created garden scenes with his 8-by-10-inch viewing camera to create perfect composition for Kodak moments or photo-ops for the visitors. He knew the value of publicity and began to send hundreds of photos to multiple newspapers, magazines and over 500 newsreels and films shown in movie theaters. The photos played a huge role in the success of the park in the early days.

During World War II, soldiers from nearby bases would come to the gardens. One soldier seeing water skiers on the lake asked if they have ski shows. Julie answered, “No, but we’re going to.”

The first water skiing show was held the next day using her two children, Dick Pope Jr. and Adrienne, and their friends. The water ski shows were very popular and became a permanent attraction. Cypress Gardens became known as “The Water Ski Capital of the World.” In later years, his son, Dick Pope Jr., would become famous for barefoot water skiing.

Southern belles appeared on the landscape out of necessity in 1940. When foliage was damaged from a hard freeze at the entrance, Julie Pope used pretty office girls to don old-fashioned dresses and hoop skirts. A shawl would be provided for warmth. The idea was to have the Southern belles hide the damaged plants by standing in front to distract visitors from noticing. The inner gardens were protected from frosts and freezes. The Southern belles became a permanent fixture.

Due to the opening of Disney World in 1971, and other large theme parks, revenue at Cypress Gardens began to decline. Beginning in the early 1980s, a series of new owners took control of the park. In 2009, Cypress Gardens closed. Two years later, LEGOLAND Florida Resort opened on the Cypress Gardens site. The original botanical gardens are intact at the heart of the park. Even the Southern belles remain, although they are now made of Legos. Water skiing shows also continue.

Dick Pope would say in later years, “Without Julie, there never would have been a Cypress Gardens. She did 90% of the work and 10% was me just showing off. You know a little guy has to do things to get noticed.” He did this by dressing garishly. One of the suits was turquoise with pink lapels worn with white shoes.

Richard Downing “Dick” Pope Sr. through his tireless efforts and his yearning for people to discover the sun and fun of Florida as a playground, spread quickly around the world. He is credited with revitalizing Florida’s economy under difficult times during the Great Depression followed by World War II.

Cypress Gardens helped to establish Central Florida as the area near Orlando for theme parks. He was often referred to as Mr. Florida or Father of Florida Tourism. When asked how he accomplished so much in his lifetime, he said, “Thinking big with persistence and positivity is the key to success.” Dick Pope Sr. passed away Feb. 1, 1988.

Hill-Gustat Middle School was the only Highlands District school that had more Controlled Open Enrollment transfer requests than available seats.

SEBRING — A total of 114 students will be attending a school different from their zoned school next year under the Controlled Open Enrollment option, which allows students to transfer to a school with available capacity.

With fewer students in school for face-to-face instruction due to the pandemic, the district had 13 schools with available capacity to accept transfers for the 2021-22 school year, including triple-digit numbers of openings at all three high schools.

Following are the number of students that schools are receiving through a Controlled Open Enrollment transfer for the 2021-22 school year:

According to the Florida Department of Education, each district school board and charter school must adopt a Controlled Open Enrollment plan that allows a parent from any school district in the state to enroll his or her child in and transport his or her child to any public school that has not reached capacity.

The Controlled Open Enrollment plan is in addition to the existing choice programs such as magnet schools, alternative schools, special programs, advanced placement, and dual enrollment.

Districts must provide preferential treatment in their Controlled Open Enrollment processes to:

• Children who have been relocated due to a foster care placement in a different school zone,

• Children who move due to a court-ordered change in custody due to separation or divorce, or the serious illness or death of a custodial parent; and

• Students residing in the district.

Highlands County saw two new cases of COVID-19, according to Tuesday’s numbers released by the Florida Department of Health.

The county’s total climbed to 8,780, with 8,682 being resident cases and the remaining 98 non-resident cases.

There were 124 resident tests processed on Tuesday, which yielded a positivity rate of 1.61% for the day. The county has been below 5% for seven straight days.

The Agency for Health Care Administration (AHCA) reports that current hospitalizations due to COVID-19 are at 11, up one from Monday. The county has seen 681 hospitalizations since the pandemic started, according to the Florida Department of Health.

There were no additional deaths for the county, which keeps the total at 366.

On Tuesday, the state shows there were 74 vaccines given in the county, although it typically takes several days for all of the numbers to come in from various locations.

So far, there have been 46,236 people in the county vaccinated, according to FDOH. There have been 11,600 people who have received the first dose and 34,636 who have gotten both shots in the series.

Vaccinations in the state were the second lowest they have been in the last two weeks, with FDOH reporting 26,236 doses given on Tuesday, although that number will likely increase some over the next few days.

The U.S. has surpassed the 50% vaccination mark, according to the Centers for Disease Control and Prevention, as 167,734,435 people have received at least one, which is 50.8% of the population. The percentage of the country that is considered fully vaccinated is 41%.

Among those 12 and over, the percentage climbs to 60.2%, while 62.9% of all adults have received at least one dose of the vaccine.

Seniors have been getting vaccinated at a higher rate than any other group, with 86% of those 65 and over having received at least one dose and 74.9% of seniors having been fully vaccinated.