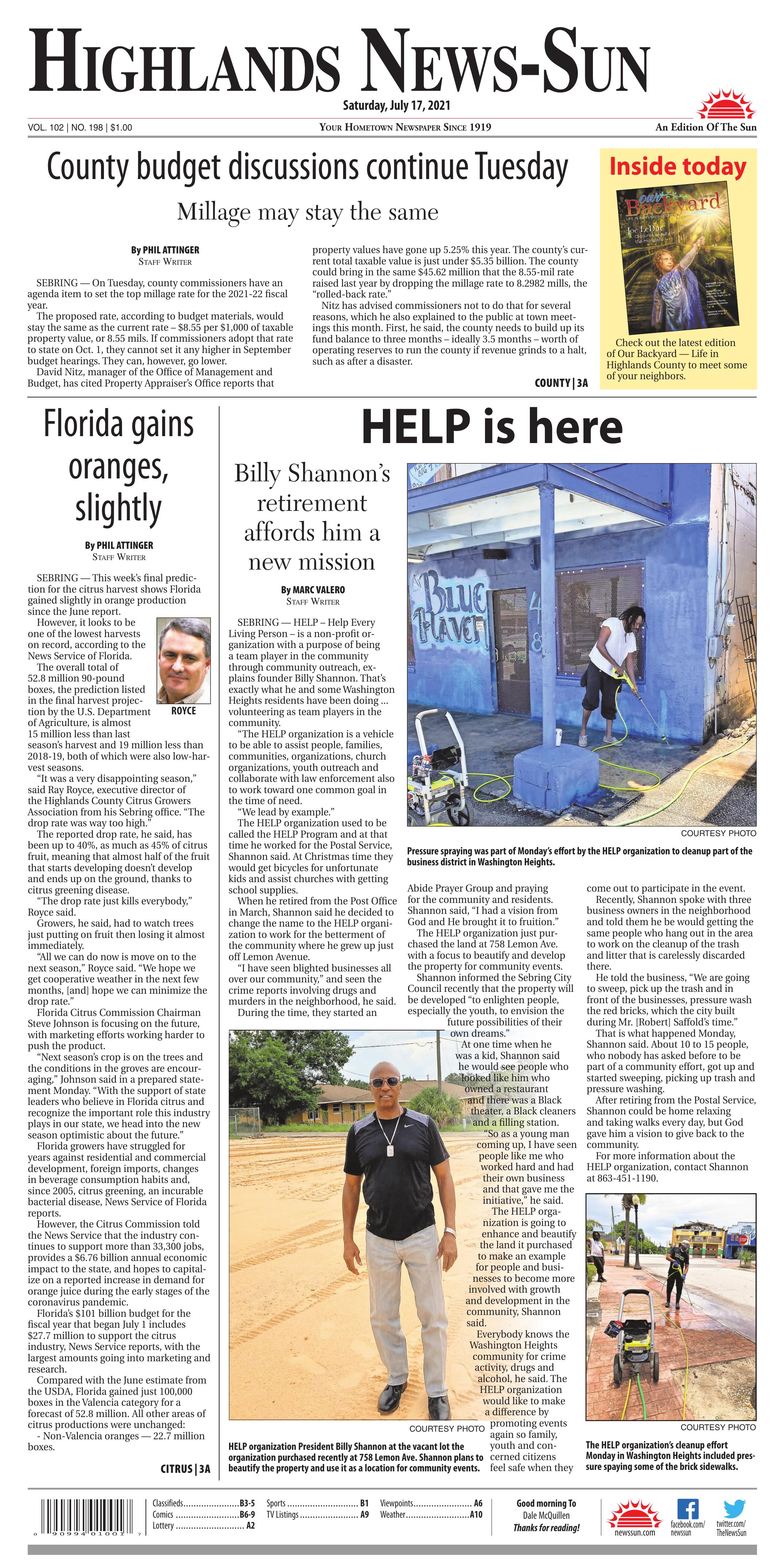 SEBRING — On Tuesday, county commissioners have an agenda item to set the top millage rate for the 2021-22 fiscal year.

The proposed rate, according to budget materials, would stay the same as the current rate – $8.55 per $1,000 of taxable property value, or 8.55 mils. If commissioners adopt that rate to state on Oct. 1, they cannot set it any higher in September budget hearings. They can, however, go lower.

David Nitz, manager of the Office of Management and Budget, has cited Property Appraiser’s Office reports that property values have gone up 5.25% this year. The county’s current total taxable value is just under $5.35 billion. The county could bring in the same $45.62 million that the 8.55-mil rate raised last year by dropping the millage rate to 8.2982 mills, the “rolled-back rate.”

Nitz has advised commissioners not to do that for several reasons, which he also explained to the public at town meetings this month. First, he said, the county needs to build up its fund balance to three months – ideally 3.5 months – worth of operating reserves to run the county if revenue grinds to a halt, such as after a disaster.

The county has used these reserves in recent years, including $15 million in Fiscal Year 2017-18 to pay for debris removal services after Hurricane Irma. The Federal Emergency Management Agency (FEMA) reimbursed approximately 90% of that, a process that took two years because of both federal and state reviews.

Having good reserves also helps with getting loans, Nitz said. The county had to get a line of credit, just in case, until reimbursed by FEMA.

This year, also, Nitz has higher budget requests from board departments, constitutional officers and outside agencies. Estimated total General Fund revenue for the 2021-22 fiscal year is $72,87 million, which includes property taxes, state revenue sharing (estimated to be up 5.6% from this fiscal year), the half-cent sales tax (up 17.4%) and other revenues (up 6.5%). Grant funds are expected to go down by 1.09%, Nitz said.

Against that, the county has estimated General Fund expenses of $77.69 million, with an increase of 1.88% for board departments and 8.1% for constitutional officers.

The total 2021-22 county budget, which includes other funds – Energy Recovery (the county asphalt plant), Solid Waste, Fire Assessment, Transportation and Infrastructure – is $156.86 million, approximately $2.33 million less than the current fiscal year, thanks in a large part to $9.5 million in “cuts” in infrastructure that Nitz explained are actually from some projects, such as Sebring Parkway Phase 2, nearing completion. Solid Waste is expected to go up by $3.62 million and the General Fund by $4.16 million.

Nitz said the county will likely allocate $4.55 million in fund balance to cover budgets, in hopes of not having to spend it.

Nitz said 69% of the General Fund pays for personnel. Right now, the only new positions in the budget are $132,081 for a building maintenance professional, which includes the cost of a vehicle. Commissioners, in a workshop last week, also asked by consensus to include a request from Highlands County Fire Rescue of $620,623 for dual-certified firefighter-paramedics.

Tuesday’s meeting will also include a workshop on outside agency funding, including constitutional offices, municipalities and non-profit organizations. Last Tuesday, commissioners discussed board departments and the capital financial strategy (road, building and infrastructure projects).

Questions at the Lake Placid meeting revolved around which entity is responsible for clearing aquatic vegetation from lake canals, as well as how the county might make boat ramps more accommodating by providing permanent restrooms or Port-O-Lets. At the Sebring meeting, resident John Drennan asked Nitz he didn’t want to see $110,000 given to each local city for recreation funding and wanted to see tax cuts overall.

“A lot of people are hurting,” Drennan said.

HELP organization President Billy Shannon at the vacant lot the organization purchased recently at 758 Lemon Ave. Shannon plans to beautify the property and use it as a location for community events.

Pressure spraying was part of Monday’s effort by the HELP organization to cleanup part of the business district in Washington Heights.

Billy Shannon and the HELP organization utilized the available manpower in Washington Heights to cleanup a section of the business district in their community.

SEBRING — HELP – Help Every Living Person – is a non-profit organization with a purpose of being a team player in the community through community outreach, explains founder Billy Shannon. That’s exactly what he and some Washington Heights residents have been doing ... volunteering as team players in the community.

“The HELP organization is a vehicle to be able to assist people, families, communities, organizations, church organizations, youth outreach and collaborate with law enforcement also to work toward one common goal in the time of need.

“We lead by example.”

The HELP organization used to be called the HELP Program and at that time he worked for the Postal Service, Shannon said. At Christmas time they would get bicycles for unfortunate kids and assist churches with getting school supplies.

When he retired from the Post Office in March, Shannon said he decided to change the name to the HELP organization to work for the betterment of the community where he grew up just off Lemon Avenue.

“I have seen blighted businesses all over our community,” and seen the crime reports involving drugs and murders in the neighborhood, he said.

During the time, they started an Abide Prayer Group and praying for the community and residents. Shannon said, “I had a vision from God and He brought it to fruition.”

The HELP organization just purchased the land at 758 Lemon Ave. with a focus to beautify and develop the property for community events.

Shannon informed the Sebring City Council recently that the property will be developed “to enlighten people, especially the youth, to envision the future possibilities of their own dreams.”

At one time when he was a kid, Shannon said he would see people who looked like him who owned a restaurant and there was a Black theater, a Black cleaners and a filling station.

“So as a young man coming up, I have seen people like me who worked hard and had their own business and that gave me the initiative,” he said.

The HELP organization is going to enhance and beautify the land it purchased to make an example for people and businesses to become more involved with growth and development in the community, Shannon said.

Everybody knows the Washington Heights community for crime activity, drugs and alcohol, he said. The HELP organization would like to make a difference by promoting events again so family, youth and concerned citizens feel safe when they come out to participate in the event.

Recently, Shannon spoke with three business owners in the neighborhood and told them he be would getting the same people who hang out in the area to work on the cleanup of the trash and litter that is carelessly discarded there.

He told the business, “We are going to sweep, pick up the trash and in front of the businesses, pressure wash the red bricks, which the city built during Mr. [Robert] Saffold’s time.”

That is what happened Monday, Shannon said. About 10 to 15 people, who nobody has asked before to be part of a community effort, got up and started sweeping, picking up trash and pressure washing.

After retiring from the Postal Service, Shannon could be home relaxing and taking walks every day, but God gave him a vision to give back to the community.

For more information about the HELP organization, contact Shannon at 863-451-1190.

SEBRING — This week’s final prediction for the citrus harvest shows Florida gained slightly in orange production since the June report.

However, it looks to be one of the lowest harvests on record, according to the News Service of Florida.

The overall total of 52.8 million 90-pound boxes, the prediction listed in the final harvest projection by the U.S. Department of Agriculture, is almost 15 million less than last season’s harvest and 19 million less than 2018-19, both of which were also low-harvest seasons.

“It was a very disappointing season,” said Ray Royce, executive director of the Highlands County Citrus Growers Association from his Sebring office. “The drop rate was way too high.”

The reported drop rate, he said, has been up to 40%, as much as 45% of citrus fruit, meaning that almost half of the fruit that starts developing doesn’t develop and ends up on the ground, thanks to citrus greening disease.

Growers, he said, had to watch trees just putting on fruit then losing it almost immediately.

“All we can do now is move on to the next season,” Royce said. “We hope we get cooperative weather in the next few months, [and] hope we can minimize the drop rate.”

Florida Citrus Commission Chairman Steve Johnson is focusing on the future, with marketing efforts working harder to push the product.

“Next season’s crop is on the trees and the conditions in the groves are encouraging,” Johnson said in a prepared statement Monday. “With the support of state leaders who believe in Florida citrus and recognize the important role this industry plays in our state, we head into the new season optimistic about the future.”

However, the Citrus Commission told the News Service that the industry continues to support more than 33,300 jobs, provides a $6.76 billion annual economic impact to the state, and hopes to capitalize on a reported increase in demand for orange juice during the early stages of the coronavirus pandemic.

Florida’s $101 billion budget for the fiscal year that began July 1 includes $27.7 million to support the citrus industry, News Service reports, with the largest amounts going into marketing and research.

Compared with the June estimate from the USDA, Florida gained just 100,000 boxes in the Valencia category for a forecast of 52.8 million. All other areas of citrus productions were unchanged:

Aside from the devastation wreaked by Hurricane Irma on the 2017-18 harvest, which saw only 49.58 million boxes, Florida’s orange production hasn’t been this low since the 1940s. News Service reports that as recently as 25 years ago, Florida produced 203.3 million boxes of oranges and 52.35 million boxes of grapefruit.

Check out the latest edition of Our Backyard — Life in Highlands County to meet some of your neighbors.