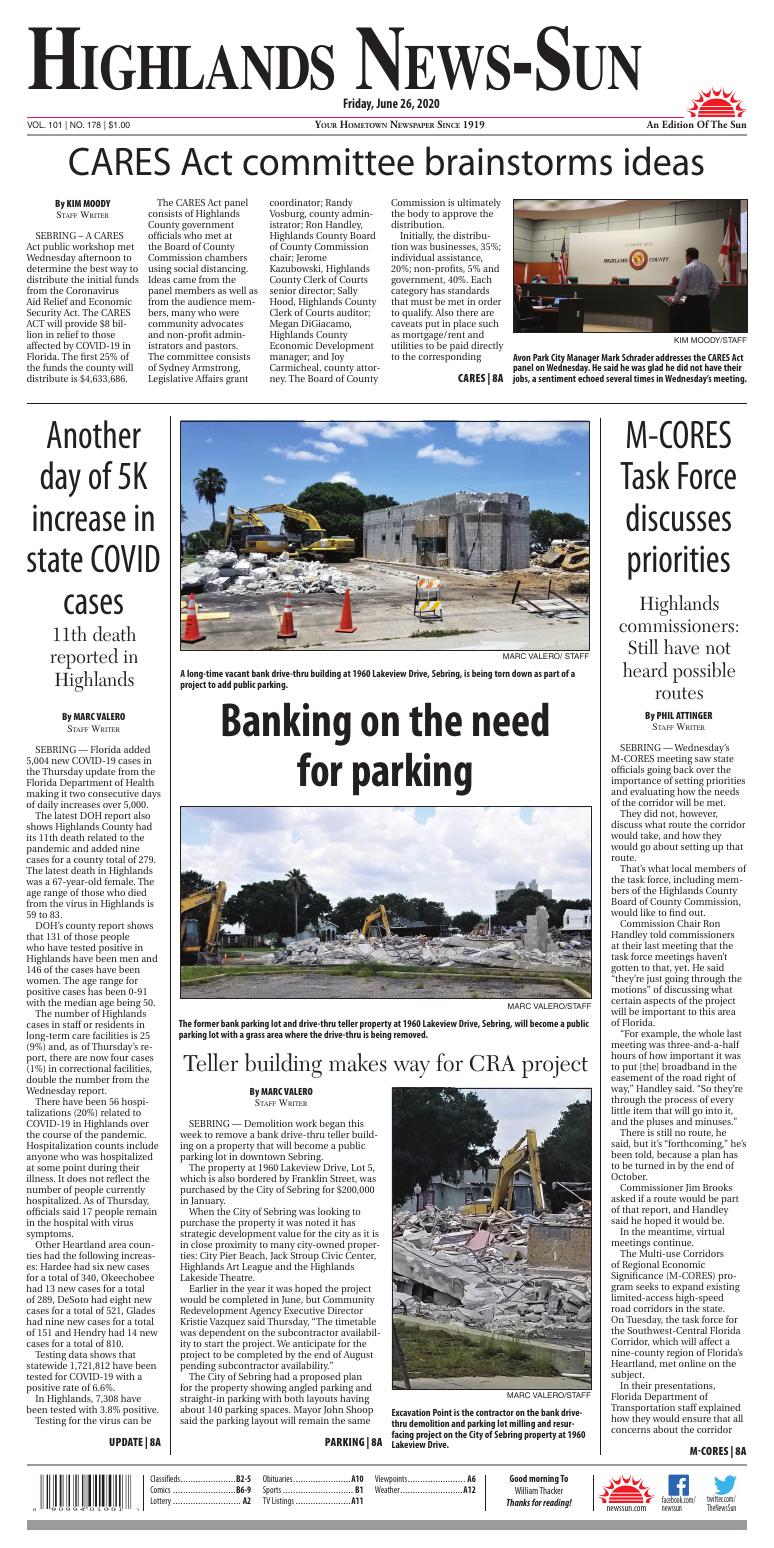 Avon Park City Manager Mark Schrader addresses the CARES Act panel on Wednesday. He said he was glad he did not have their jobs, a sentiment echoed several times in Wednesday’s meeting.

The CARES Act committee met with social distancing Wednesday afternoon to try and figure out how to distribute over $4.6 million.

SEBRING – A CARES Act public workshop met Wednesday afternoon to determine the best way to distribute the initial funds from the Coronavirus Aid Relief and Economic Security Act. The CARES ACT will provide $8 billion in relief to those affected by COVID-19 in Florida. The first 25% of the funds the county will distribute is $4,633,686.

Initially, the distribution was businesses, 35%; individual assistance, 20%; non-profits, 5% and government, 40%. Each category has standards that must be met in order to qualify. Also there are caveats put in place such as mortgage/rent and utilities to be paid directly to the corresponding companies.

There was a general consensus that the government’s percentage was too much. The government portion would have used the funds for additional testing sites, the COVID call center and to cover additional personnel time among other items.

“I will tell you that on the government portions, we are not allowed to make ourselves whole from a loss of revenue,” Vosburg said.

Vosburg also said that, like businesses and non-profits, they will definitely see a loss of revenue from gas, and tourism taxes and sales taxes, etc. Money he does not believe will be recouped.

“The only thing the government can get into is reimbursing costs that we have experienced related to COVID,” he said.

A member of the public voiced their concern that the business sector included small businesses such as lawn services that might not be incorporated or have other employees. Sebring Chamber of Commerce CEO Liz Barber commented that even small business owners such as law maintenance companies should be able to prove they are a business through tax returns. Carmichael said she was aware of the need to have a legal definition of businesses.

When asked for input on the assignation of the percents, Barber stated the government’s portion, regardless of good intentions, should not be the highest percentage. Another opinion was voiced by Dan Paige who suggested 30% to businesses, 30% to individuals, 25% to non-profits and 15% for the government. He stated that making businesses whole and individuals whole, they would make the government whole.

Non-profits were well represented with members of Nu-Hope, United Way and others. The representatives gave examples of how their clients were financially impacted by COVID-19.

Under the non-profits, a pastor stood up and said his church would not qualify because they were not a 501 ©3. Dr. Bobbie Smith-Powell, a local co-pastor, said she was in solidarity with the pastor. Not all churches were 501©3 but functioned as a church. Powell suggested a separate designation for churches in order that they would qualify. The churches have stepped up by helping people during the pandemic that may not necessarily show as a loss but they have had to channel money into certain ministries such as a food pantry. Another concern for churches is the “staff” is often volunteers, so it will be hard to show a loss of employee hours.

Other topics such as childcare facilities and homeless communities were briefly touched upon with the promise to return to them.

Another workshop will take place at 2 p.m. Wednesday, July 1 at the County Commission chambers. The final draft will be made ready to go before the July 7 BOCC meeting at 9 a.m.

A long-time vacant bank drive-thru building at 1960 Lakeview Drive, Sebring, is being torn down as part of a project to add public parking.

The former bank parking lot and drive-thru teller property at 1960 Lakeview Drive, Sebring, will become a public parking lot with a grass area where the drive-thru is being removed.

Excavation Point is the contractor on the bank drive-thru demolition and parking lot milling and resurfacing project on the City of Sebring property at 1960 Lakeview Drive.

SEBRING — Demolition work began this week to remove a bank drive-thru teller building on a property that will become a public parking lot in downtown Sebring.

The property at 1960 Lakeview Drive, Lot 5, which is also bordered by Franklin Street, was purchased by the City of Sebring for $200,000 in January.

When the City of Sebring was looking to purchase the property it was noted it has strategic development value for the city as it is in close proximity to many city-owned properties: City Pier Beach, Jack Stroup Civic Center, Highlands Art League and the Highlands Lakeside Theatre.

The City of Sebring had a proposed plan for the property showing angled parking and straight-in parking with both layouts having about 140 parking spaces. Mayor John Shoop said the parking layout will remain the same with angled parking.

The four parking pods will remain and will be resurfaced for now, he said.

The area where the bank/teller structure is being removed will be a big grassed lot, Shoop said. When there is a festival or the triathlon, a big tent could be put up there.

The CRA is looking at the whole downtown waterfront plan, he said.

“Until they figure out what we really want to do with all that, instead of spending the money to make that a complete parking lot, it is just to restore it so people can park there now and make it nice and kind of leave it as it is and make that centerpiece a big grass parking lot,” Shoop said.

The property has been a Barnett Bank, Tropical State Bank and Bank of America.

The Sebring CRA Board approved of the improvements to the bank parking lot to include demolition of the teller building, installing sod and irrigation, and making enhancements to the parking lot surface, according to Vazquez.

In March the Community Redevelopment Agency Board awarded the demolition and parking lot improvements to Excavation Point, and the sod and irrigation work to All About Lawns.

The Excavation Point proposal for the teller building demolition totaled $29,410, which, along with the structure demolition, includes importing 225 cubic yards of fill and sodding about 25,500 square feet. The proposal for milling and resurfacing the parking lot, which includes curb and gutter work, totaled $45,589.

The All About Lawns proposal for installing irrigation and sod totaled $14,000.

SEBRING — Florida added 5,004 new COVID-19 cases in the Thursday update from the Florida Department of Health making it two consecutive days of daily increases over 5,000.

The latest DOH report also shows Highlands County had its 11th death related to the pandemic and added nine cases for a county total of 279. The latest death in Highlands was a 67-year-old female. The age range of those who died from the virus in Highlands is 59 to 83.

DOH’s county report shows that 131 of those people who have tested positive in Highlands have been men and 146 of the cases have been women. The age range for positive cases has been 0-91 with the median age being 50.

The number of Highlands cases in staff or residents in long-term care facilities is 25 (9%) and, as of Thursday’s report, there are now four cases (1%) in correctional facilities, double the number from the Wednesday report.

There have been 56 hospitalizations (20%) related to COVID-19 in Highlands over the course of the pandemic. Hospitalization counts include anyone who was hospitalized at some point during their illness. It does not reflect the number of people currently hospitalized. As of Thursday, officials said 17 people remain in the hospital with virus symptoms.

Testing for the virus can be done at the Highlands County Health Department on Mondays and Fridays for those who are showing symptoms. Call 863-382-7260 to make an appointment. Testing is also being done at Central Florida Health Department, but again, appointments are required.

The Highlands News-Sun has become part of the county’s statistics now with an employee who has tested positive for the virus. As a result, attempts are being made to have office employees tested. Members of the public who were in contact with the employee have been notified.

The office continues to be thoroughly cleaned and sanitized on a weekly basis since it was reopened last month.

SEBRING — Wednesday’s M-CORES meeting saw state officials going back over the importance of setting priorities and evaluating how the needs of the corridor will be met.

They did not, however, discuss what route the corridor would take, and how they would go about setting up that route.

Commission Chair Ron Handley told commissioners at their last meeting that the task force meetings haven’t gotten to that, yet. He said “they’re just going through the motions” of discussing what certain aspects of the project will be important to this area of Florida.

“For example, the whole last meeting was three-and-a-half hours of how important it was to put [the] broadband in the easement of the road right of way,” Handley said. “So they’re through the process of every little item that will go into it, and the pluses and minuses.”

There is still no route, he said, but it’s “forthcoming,” he’s been told, because a plan has to be turned in by the end of October.

Commissioner Jim Brooks asked if a route would be part of that report, and Handley said he hoped it would be.

In the meantime, virtual meetings continue.

The Multi-use Corridors of Regional Economic Significance (M-CORES) program seeks to expand existing limited-access high-speed road corridors in the state. On Tuesday, the task force for the Southwest-Central Florida Corridor, which will affect a nine-county region of Florida’s Heartland, met online on the subject.

They said they were still looking at data and forecast models of traffic levels and needs to see whether or not future needs would be met.

“Because we’re still at such a high level [of perspective], it’s difficult to pin those numbers down,” FDOT Chief Planner Huiwei Shen said.

At the moment, she said, FDOT officials would focus on “communicating the intent” of the plans, with details to come later.

“Now we are to the point where we need to roll up our sleeves and sharpen our pencils and come up with our report,” Shen said.

She said the report, which will be 15 pages or more, will include a section called “Task Force recommendations,” that would outline “high-level needs,” “guiding principles” and “instructions for project development and beyond.”

The task force, Shen said, would work together on this report over the next few meetings, and would include an “Action Plan” as the final section of the report.

Marlon Bizerra, production lead, encouraged members of the task force to go into their materials and review the overlay maps for the sensitive areas throughout the region, which include wetlands and conservation areas, residential area, military bases and Native American lands.

Currently, plans state that the existence, design and capabilities of the roadway corridor must:

Comments at the meeting included the need to add agriculture and water supply to the list of improved economic drivers and natural resources, respectively.

A rebuttal comment said that agriculture is but one industry that needs development throughout the region, which was answered by an argument that agriculture ensures the state has open space and water recharge areas — something not possible with a “factory of cement.”

Another comment asked to have wetlands specifically mentioned, as well as sea level rise, both “woven into the dialogue for all development.” 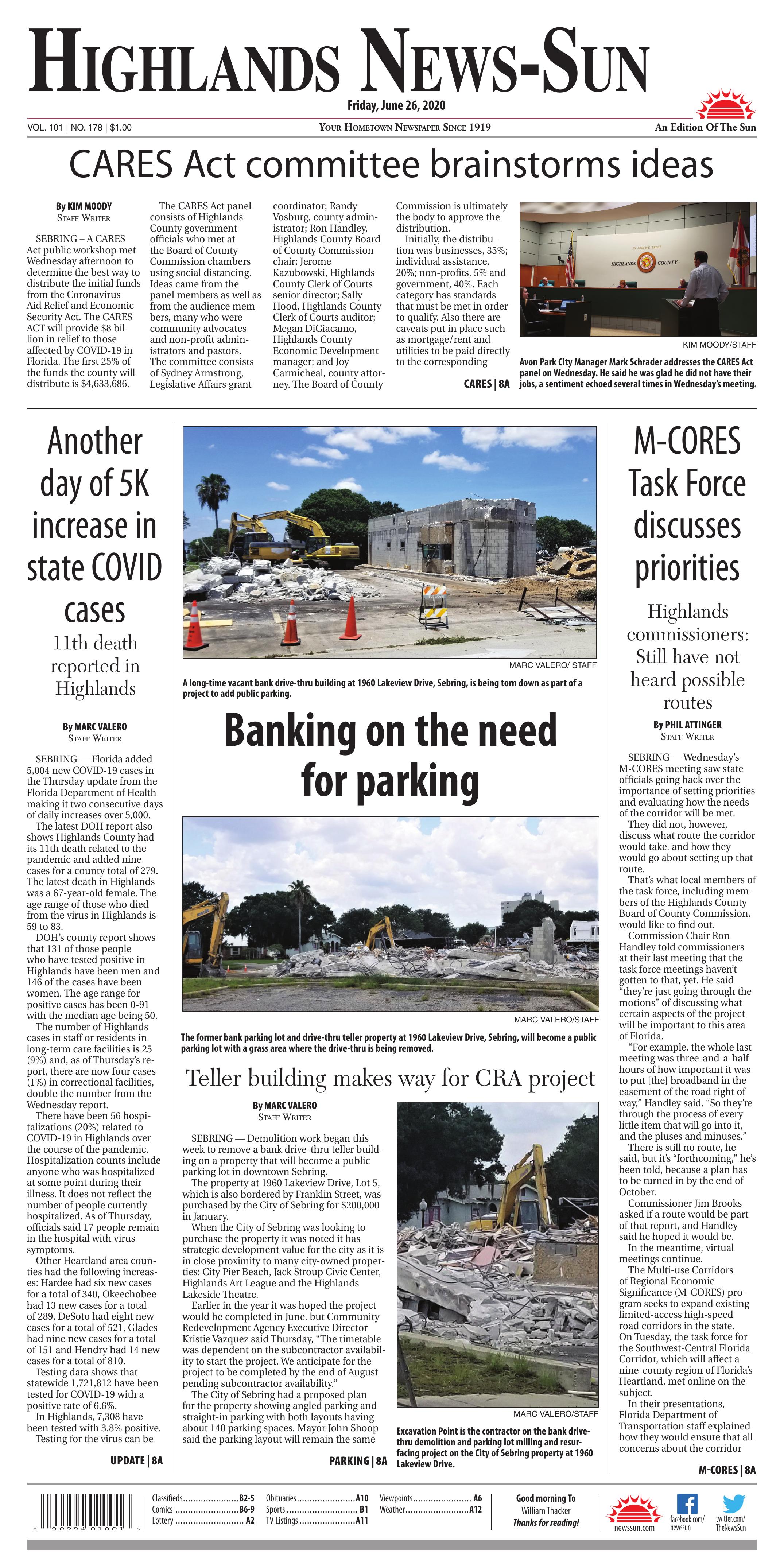