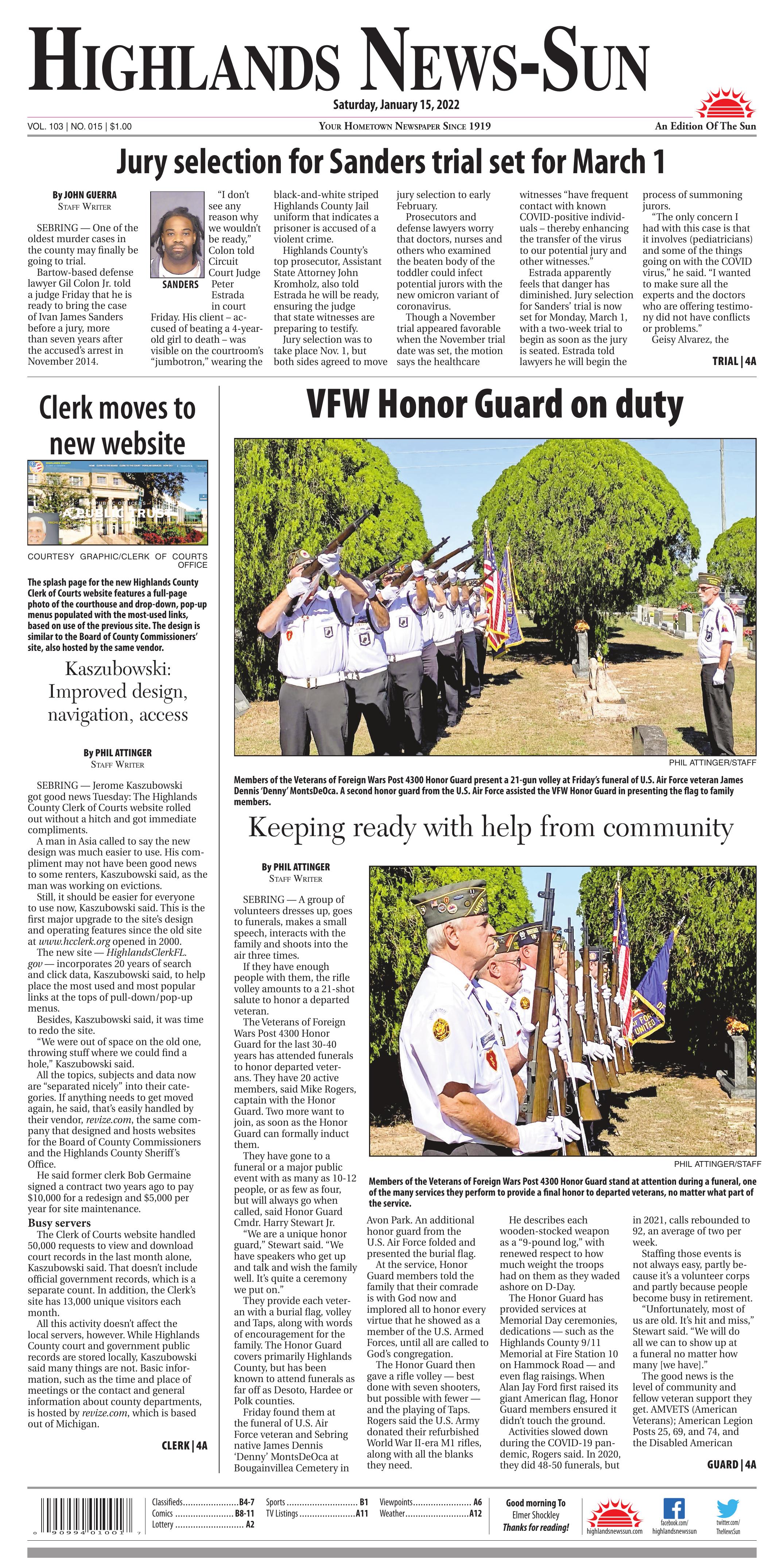 SEBRING — One of the oldest murder cases in the county may finally be going to trial.

Bartow-based defense lawyer Gil Colon Jr. told a judge Friday that he is ready to bring the case of Ivan James Sanders before a jury, more than seven years after the accused’s arrest in November 2014.

“I don’t see any reason why we wouldn’t be ready,” Colon told Circuit Court Judge Peter Estrada in court Friday. His client – accused of beating a 4-year-old girl to death – was visible on the courtroom’s “jumbotron,” wearing the black-and-white striped Highlands County Jail uniform that indicates a prisoner is accused of a violent crime.

Prosecutors and defense lawyers worry that doctors, nurses and others who examined the beaten body of the toddler could infect potential jurors with the new omicron variant of coronavirus.

Though a November trial appeared favorable when the November trial date was set, the motion says the healthcare witnesses “have frequent contact with known COVID-positive individuals – thereby enhancing the transfer of the virus to our potential jury and other witnesses.”

Estrada apparently feels that danger has diminished. Jury selection for Sanders’ trial is now set for Monday, March 1, with a two-week trial to begin as soon as the jury is seated. Estrada told lawyers he will begin the process of summoning jurors.

“The only concern I had with this case is that it involves (pediatricians) and some of the things going on with the COVID virus,” he said. “I wanted to make sure all the experts and the doctors who are offering testimony did not have conflicts or problems.”

Geisy Alvarez, the deceased child’s mother and Sanders’ live-in girlfriend, was not charged in the case. She is expected to testify for the prosecution by pointing to Sanders as the person in whose care she left her daughter.

Another witness the state hoped to call died recently. That man, George Wells, lived near the Sebring home where Sanders, the victim, and her mother lived at the time of the crime. Wells was expected to testify that he had encountered the victim, Mercedes Blair, a day before her death, according to court records. Wells called law enforcement because the child appeared lost.

Sanders’ case is the second-oldest homicide case in the county. The oldest case, that of Phillip Markland Jr., goes back to the date of his arrest in June 2014. Markland is charged with first degree murder for shooting his uncle to death.

Carolyn Hall has repeatedly expressed her frustration at how long it has taken to bring justice for Mercedes Blair, her granddaughter.

“When we go to court, we have to relive this again, there’s no moving on,” Hall told the Highlands News-Sun in May. “This is probably the longest seven years of our lives.”

If found guilty of first degree murder, Sanders could be sentenced to the rest of his life in prison. If guilty of aggravated child abuse, it’s another 30 years.

Members of the Veterans of Foreign Wars Post 4300 Honor Guard stand at attention during a funeral, one of the many services they perform to provide a final honor to departed veterans, no matter what part of the service.

The 2006 Ford van used by the Veterans of Foreign Wars Post 4300 Honor Guard doesn’t show it, but has rust on the roof and 170,000 miles on the odometer. Honor Guard members have raised half of the funds to get it replaced.

Mike Rogers, captain with the Veterans of Foreign Wars Post 4300 Honor Guard, holds one of the masks the members can wear if families request them. Few do now as at the beginning of the pandemic, thanks to vaccinations and graveside services being outdoors, with the Honor Guard yards away from guests.

SEBRING — A group of volunteers dresses up, goes to funerals, makes a small speech, interacts with the family and shoots into the air three times.

If they have enough people with them, the rifle volley amounts to a 21-shot salute to honor a departed veteran.

The Veterans of Foreign Wars Post 4300 Honor Guard for the last 30-40 years has attended funerals to honor departed veterans. They have 20 active members, said Mike Rogers, captain with the Honor Guard. Two more want to join, as soon as the Honor Guard can formally induct them.

They have gone to a funeral or a major public event with as many as 10-12 people, or as few as four, but will always go when called, said Honor Guard Cmdr. Harry Stewart Jr.

“We are a unique honor guard,” Stewart said. “We have speakers who get up and talk and wish the family well. It’s quite a ceremony we put on.”

They provide each veteran with a burial flag, volley and Taps, along with words of encouragement for the family. The Honor Guard covers primarily Highlands County, but has been known to attend funerals as far off as Desoto, Hardee or Polk counties.

Friday found them at the funeral of U.S. Air Force veteran and Sebring native James Dennis ‘Denny’ MontsDeOca at Bougainvillea Cemetery in Avon Park. An additional honor guard from the U.S. Air Force folded and presented the burial flag.

At the service, Honor Guard members told the family that their comrade is with God now and implored all to honor every virtue that he showed as a member of the U.S. Armed Forces, until all are called to God’s congregation.

The Honor Guard then gave a rifle volley — best done with seven shooters, but possible with fewer — and the playing of Taps. Rogers said the U.S. Army donated their refurbished World War II-era M1 rifles, along with all the blanks they need.

He describes each wooden-stocked weapon as a “9-pound log,” with renewed respect to how much weight the troops had on them as they waded ashore on D-Day.

The Honor Guard has provided services at Memorial Day ceremonies, dedications — such as the Highlands County 9/11 Memorial at Fire Station 10 on Hammock Road — and even flag raisings. When Alan Jay Ford first raised its giant American flag, Honor Guard members ensured it didn’t touch the ground.

“Unfortunately, most of us are old. It’s hit and miss,” Stewart said. “We will do all we can to show up at a funeral no matter how many [we have].”

The good news is the level of community and fellow veteran support they get. AMVETS (American Veterans); American Legion Posts 25, 69, and 74, and the Disabled American Veterans — to name a few — helped the Honor Guard secure their van. It serves them well, but has suffered from age. Stewart and Rogers said the hand-me-over 2006 Ford van from another veterans organization just had a rusted-through spot repaired on the hood and has more rust eating away at the roof. It also has 170,000 miles on the odometer.

The splash page for the new Highlands County Clerk of Courts website features a full-page photo of the courthouse and drop-down, pop-up menus populated with the most-used links, based on use of the previous site. The design is similar to the Board of County Commissioners’ site, also hosted by the same vendor.

SEBRING — Jerome Kaszubowski got good news Tuesday: The Highlands County Clerk of Courts website rolled out without a hitch and got immediate compliments.

A man in Asia called to say the new design was much easier to use. His compliment may not have been good news to some renters, Kaszubowski said, as the man was working on evictions.

Still, it should be easier for everyone to use now, Kaszubowski said. This is the first major upgrade to the site’s design and operating features since the old site at www.hcclerk.org opened in 2000.

The new site — HighlandsClerkFL.gov — incorporates 20 years of search and click data, Kaszubowski said, to help place the most used and most popular links at the tops of pull-down/pop-up menus.

Besides, Kaszubowski said, it was time to redo the site.

“We were out of space on the old one, throwing stuff where we could find a hole,” Kaszubowski said.

All the topics, subjects and data now are “separated nicely” into their categories. If anything needs to get moved again, he said, that’s easily handled by their vendor, revize.com, the same company that designed and hosts websites for the Board of County Commissioners and the Highlands County Sheriff’s Office.

He said former clerk Bob Germaine signed a contract two years ago to pay $10,000 for a redesign and $5,000 per year for site maintenance.

Busy serversThe Clerk of Courts website handled 50,000 requests to view and download court records in the last month alone, Kaszubowski said. That doesn’t include official government records, which is a separate count. In addition, the Clerk’s site has 13,000 unique visitors each month.

All this activity doesn’t affect the local servers, however. While Highlands County court and government public records are stored locally, Kaszubowski said many things are not. Basic information, such as the time and place of meetings or the contact and general information about county departments, is hosted by revize.com, which is based out of Michigan.

The website connects to other sites, like Grancius, for access to Board of County Commissioner agendas and meeting videos, or state court servers in Tallahassee. It’s not an issue of capacity, Kaszubowski said: It’s convenience. The Comprehensive Case Information System (CCIS) makes it easier for a judge on a bench or the clerk in the courtroom to find background on a defendant or a case at a moment’s notice.

Ease of useOther features on the new Clerk’s website include an updated search feature, social media links and Americans with Disabilities Act features. It’s also designed for mobile devices, Kaszubowski said, much more than the last one.

Darlene Stoelton, recently retired senior director of Court Services with 35 years of handling requests in person, said many requests had become remote, even before the pandemic.

“As the years went by, things became more and more accessible to people,” Stoelton said. “It’s just very convenient to people. They can get on there and do everything themselves.”

Staff didn’t feel left out, she said. People could still call for assistance or visit in person, at least when COVID-19 didn’t close the courthouse.

“If it hadn’t been for records being digitized and people able to look things up themselves, I don’t know how we would have done it,” Stoelton said.

The new website is still reachable, for now, at the old web address. Transitioning to the new site may take a few days, Kaszubowski said. If you have any questions, either with the new site or trying to find a document, you can still contact the Clerk of Courts Office at 863-402-6565.

The human-run customer service feature, in place since before everything went digital, has not changed.