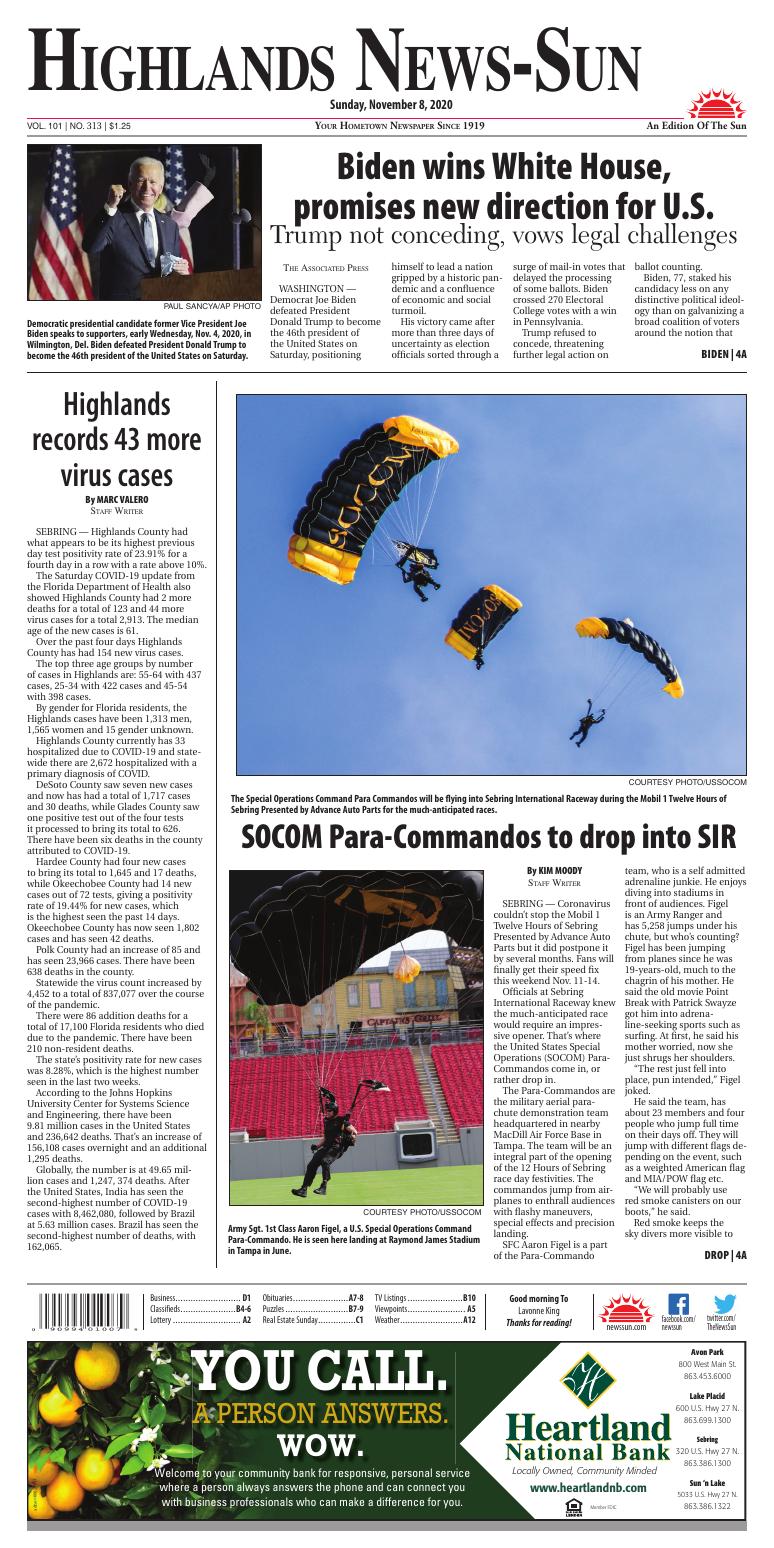 WASHINGTON — Democrat Joe Biden defeated President Donald Trump to become the 46th president of the United States on Saturday, positioning himself to lead a nation gripped by a historic pandemic and a confluence of economic and social turmoil.

His victory came after more than three days of uncertainty as election officials sorted through a surge of mail-in votes that delayed the processing of some ballots. Biden crossed 270 Electoral College votes with a win in Pennsylvania.

Biden, 77, staked his candidacy less on any distinctive political ideology than on galvanizing a broad coalition of voters around the notion that Trump posed an existential threat to American democracy. The strategy proved effective, resulting in pivotal victories in Michigan and Wisconsin as well as Pennsylvania, onetime Democratic bastions that had flipped to Trump in 2016.

Biden, in a statement, said he was humbled by the victory and it was time for the battered nation to set aside its differences.

“It’s time for America to unite. And to heal,” he said.

“With the campaign over, it’s time to put the anger and the harsh rhetoric behind us and come together as a nation,” Biden said. “There’s nothing we can’t do if we do it together.”

Biden was on track to win the national popular vote by more than 4 million, a margin that could grow as ballots continue to be counted.

Trump was not giving up.

He issued a combative statement while he was on his Virginia golf course. It said his campaign would take unspecified legal actions and he would “not rest until the American People have the honest vote count they deserve and that Democracy demands.”

Trump has pointed to delays in processing the vote in some states to allege that there was voter fraud and to argue that his rival was trying to seize power — an extraordinary charge by a sitting president trying to sow doubt about a bedrock democratic process.

Kamala Harris also made history as the first Black woman to become vice president, an achievement that comes as the U.S. faces a reckoning on racial justice. The California senator, who is also the first person of South Asian descent elected to the vice presidency, will become the highest-ranking woman ever to serve in government, four years after Trump defeated Hillary Clinton.

Trump is the first incumbent president to lose reelection since Republican George H.W. Bush in 1992.

Early Saturday he left the White House for his Virginia golf club dressed in golf shoes, a windbreaker and a white hat as the results gradually expanded Biden’s lead in Pennsylvania.

Trump repeated his unsupported allegations of election fraud and illegal voting on Twitter. One of his tweets, quickly flagged as potentially misleading by Twitter, claimed: “I WON THIS ELECTION, BY A LOT!”

Trump’s refusal to concede has no legal implications. But it could add to the incoming administration’s challenge of bringing the country together after a bitter election.

Republicans on Capitol Hill are giving President Trump and his campaign space to consider all its legal options after his election defeat by President-elect Joe Biden. That’s according to one Republican who spoke on condition of anonymity to discuss the private conversation.

It’s a precarious balance for Trump’s allies as they try to be supportive of the president but face the reality of the vote count. Trump is so far refusing to concede.

On Saturday, Senate Majority Leader Mitch McConnell had not yet made any public statements.

Scott Jennings, a Republican strategist in Kentucky allied with McConnell, said, “I’m not sure his position would have changed from yesterday — count all the votes, adjudicate all the claims.”

It was a view being echoed by several other Republicans neither supporting nor rejecting the outcome. Said retiring GOP Sen. Lamar Alexander of Tennessee, who is close with McConnell: “After counting every valid vote and allowing courts to resolve disputes, it is important to respect and promptly accept the result.”

The Special Operations Command Para Commandos will be flying into Sebring International Raceway during the Mobil 1 Twelve Hours of Sebring Presented by Advance Auto Parts for the much-anticipated races.

This Para-Commandos can fly in to stadiums or air shows and can land with amazing precision.

SEBRING — Coronavirus couldn’t stop the Mobil 1 Twelve Hours of Sebring Presented by Advance Auto Parts but it did postpone it by several months. Fans will finally get their speed fix this weekend Nov. 11-14.

Officials at Sebring International Raceway knew the much-anticipated race would require an impressive opener. That’s where the United States Special Operations (SOCOM) Para-Commandos come in, or rather drop in.

The Para-Commandos are the military aerial parachute demonstration team headquartered in nearby MacDill Air Force Base in Tampa. The team will be an integral part of the opening of the 12 Hours of Sebring race day festivities. The commandos jump from airplanes to enthrall audiences with flashy maneuvers, special effects and precision landing.

SFC Aaron Figel is a part of the Para-Commando team, who is a self admitted adrenaline junkie. He enjoys diving into stadiums in front of audiences. Figel is an Army Ranger and has 5,258 jumps under his chute, but who’s counting? Figel has been jumping from planes since he was 19-years-old, much to the chagrin of his mother. He said the old movie Point Break with Patrick Swayze got him into adrenaline-seeking sports such as surfing. At first, he said his mother worried, now she just shrugs her shoulders.

He said the team, has about 23 members and four people who jump full time on their days off. They will jump with different flags depending on the event, such as a weighted American flag and MIA/POW flag etc.

“We will probably use red smoke canisters on our boots,” he said.

Red smoke keeps the sky divers more visible to those on the ground. He said white and blue smoke does not show up as well as the red. The team jumps from heights of over 13,000 feet to as low as 2,000 feet above ground. Speeds of 120 mph are reached in the dives.

The commandos are men and women from special operations forces of different branches.

Gates will open for the Mobil 1 Twelve Hours of Sebring Presented by Advance Auto Parts on Wednesday at 6 a.m. The race will begin Saturday at 10:10 a.m.

SEBRING — Highlands County had what appears to be its highest previous day test positivity rate of 23.91% for a fourth day in a row with a rate above 10%.

The Saturday COVID-19 update from the Florida Department of Health also showed Highlands County had 2 more deaths for a total of 123 and 44 more virus cases for a total 2,913. The median age of the new cases is 61.

Over the past four days Highlands County has had 154 new virus cases.

By gender for Florida residents, the Highlands cases have been 1,313 men, 1,565 women and 15 gender unknown.

Highlands County currently has 33 hospitalized due to COVID-19 and statewide there are 2,672 hospitalized with a primary diagnosis of COVID.

DeSoto County saw seven new cases and now has had a total of 1,717 cases and 30 deaths, while Glades County saw one positive test out of the four tests it processed to bring its total to 626. There have been six deaths in the county attributed to COVID-19.

There were 86 addition deaths for a total of 17,100 Florida residents who died due to the pandemic. There have been 210 non-resident deaths.

The state’s positivity rate for new cases was 8.28%, which is the highest number seen in the last two weeks.

According to the Johns Hopkins University Center for Systems Science and Engineering, there have been 9.81 million cases in the United States and 236,642 deaths. That’s an increase of 156,108 cases overnight and an additional 1,295 deaths. 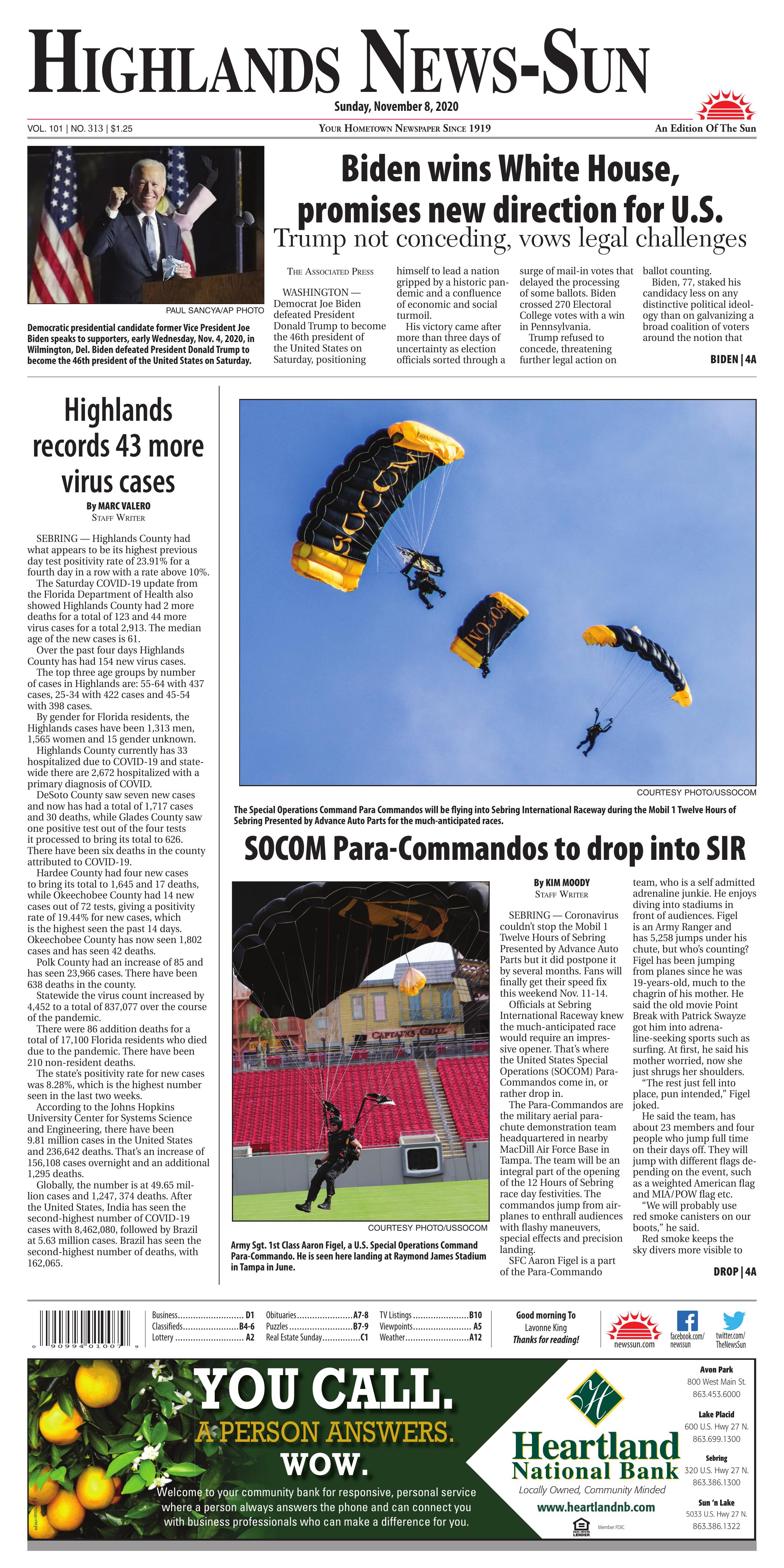