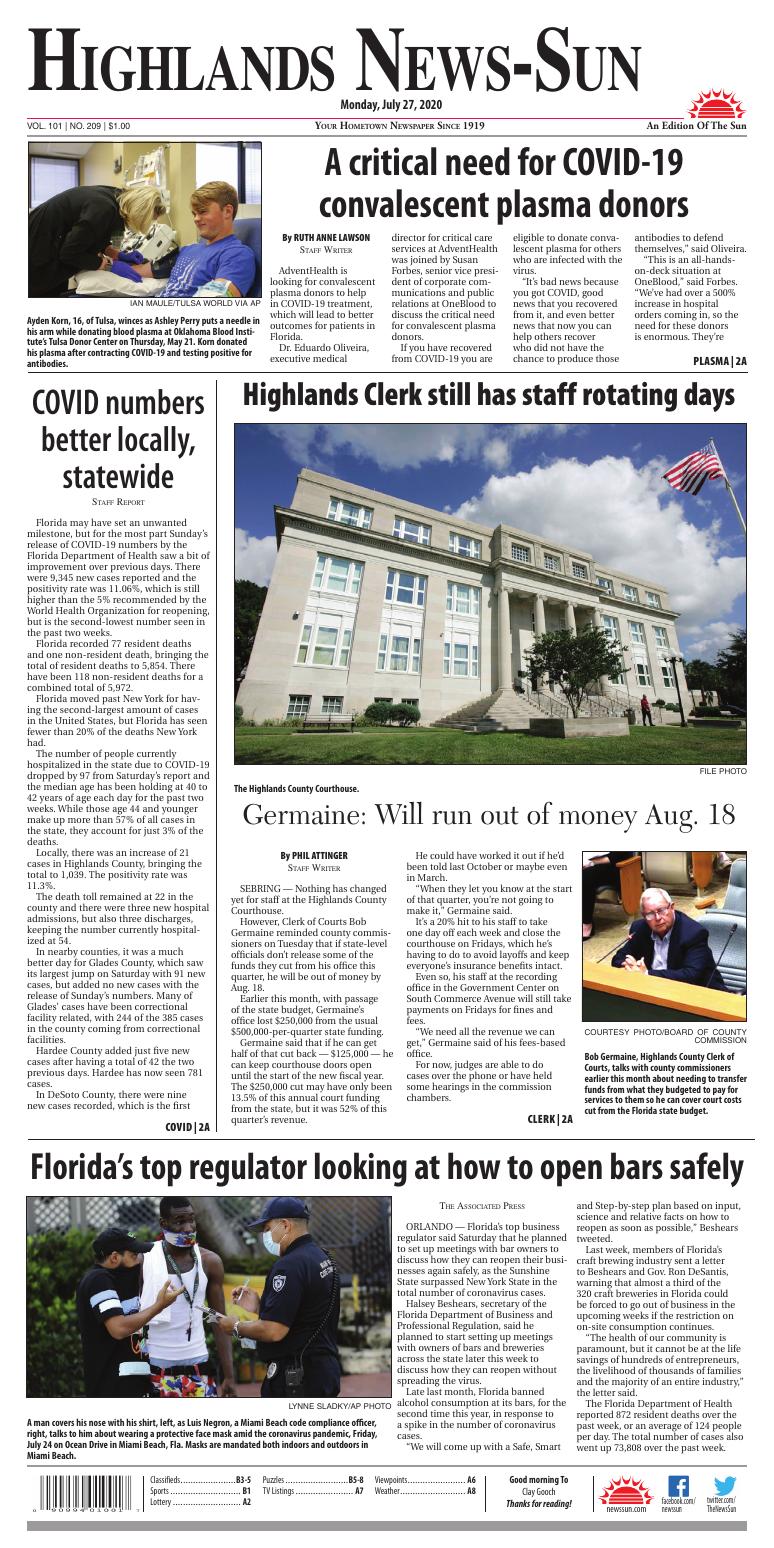 Ayden Korn, 16, of Tulsa, winces as Ashley Perry puts a needle in his arm while donating blood plasma at Oklahoma Blood Institute’s Tulsa Donor Center on Thursday, May 21. Korn donated his plasma after contracting COVID-19 and testing positive for antibodies.

In this May 7, 2020, photo, anesthesiologist Manuel Sotelo III squeezes a ball as he donates plasma so his antibodies can be transferred to help a COVID-19 patient at the Cardinal Santos Medical Center at San Juan in Manila, Philippines. Sotelo was tested positive for the COVID-19 and has now recovered.

AdventHealth is looking for convalescent plasma donors to help in COVID-19 treatment, which will lead to better outcomes for patients in Florida.

If you have recovered from COVID-19 you are eligible to donate convalescent plasma for others who are infected with the virus.

“It’s bad news because you got COVID, good news that you recovered from it, and even better news that now you can help others recover who did not have the chance to produce those antibodies to defend themselves,” said Oliveira.

“This is an all-hands-on-deck situation at OneBlood,” said Forbes. “We’ve had over a 500% increase in hospital orders coming in, so the need for these donors is enormous. They’re playing a key role in helping patients, and they are urgently needed to come forward to help. Donors really are the unsung heroes in our community who are playing a huge role in helping save lives.”

Oliveira said COVID-19 patients who receive convalescent plasma may also be treated with antiviral, steroid or other medications to treat the coronavirus.

The importance of convalescent plasma in treating COVID-19. Convalescent plasma has been used successfully for the past 50-60 years with some success and was used in SARS and MERS epidemics a few years ago. It is now helpful in treating COVID-19. Individuals who have recovered from COVID-19 have antibodies in their blood that help block the virus and their plasma can be used in transfusions to help others who are battling active infections.

Convalescent plasma treatments lead to better outcomes for COVID-19 patients. AdventHealth has used convalescent plasma in nearly 300 patients in various stages of COVID-19. In some cases, it has kept the illness in patients from progressing to where they would need to be in the ICU. In cases where patients are very ill in the ICU or on ventilators, convalescent plasma has helped accelerate the healing process and helped patients recover much faster.

OneBlood has an urgent need for recovered COVID-19 patients as plasma donors. As the blood provider for local hospitals, OneBlood is collecting convalescent plasma from people who have recovered from COVID-19, seven days a week. Potential donors are asked to register in advance on oneblood.org and those who fit the criteria will be able to set up an appointment for collection.

Bob Germaine, Highlands County Clerk of Courts, talks with county commissioners earlier this month about needing to transfer funds from what they budgeted to pay for services to them so he can cover court costs cut from the Florida state budget.

SEBRING — Nothing has changed yet for staff at the Highlands County Courthouse.

However, Clerk of Courts Bob Germaine reminded county commissioners on Tuesday that if state-level officials don’t release some of the funds they cut from his office this quarter, he will be out of money by Aug. 18.

Earlier this month, with passage of the state budget, Germaine’s office lost $250,000 from the usual $500,000-per-quarter state funding.

He could have worked it out if he’d been told last October or maybe even in March.

“When they let you know at the start of that quarter, you’re not going to make it,” Germaine said.

It’s a 20% hit to his staff to take one day off each week and close the courthouse on Fridays, which he’s having to do to avoid layoffs and keep everyone’s insurance benefits intact.

Even so, his staff at the recording office in the Government Center on South Commerce Avenue will still take payments on Fridays for fines and fees.

“We need all the revenue we can get,” Germaine said of his fees-based office.

For now, judges are able to do cases over the phone or have held some hearings in the commission chambers.

When the judicial system is told to reopen fully, Germaine said, “it’s going to be really, really ‘big time.’”

He’s told local judges to understand his office will be short-staffed.

“I can’t say enough about my staff,” Germaine said. “They’re happy to do the job. I love my staff and they would do anything for me.”

Meanwhile, Germaine has heard some smaller counties have shut down courts for two days per week. He likened the situation to the aftermath of a massive hurricane.

There is an eye in the storm, so to speak. Germaine reported Highlands County just got the first $4.6 million payment of its Coronavirus Aid, Relief and Economic Safety (CARES) Act funds.

However, he cautions commissioners not to entertain notions of picking up the tab.

“You need to tell the governor it’s his responsibility to fund the courts,” Germaine said. “Here’s the problem, is that some counties are funding the clerk’s office. That’s where the problem is, because the governor will sit back and say, ‘why can’t the rest?’”

Germaine said he’s been asked to return a survey on what would happen if the Governor’s Office doesn’t approve any additional money.

Commission Chair Ron Handley said he’s written a rough draft of a letter and will send it to Gov. Ron DeSantis on the matter.

Germaine also spoke with commissioners about his upcoming fiscal year budget during a budget workshop on Tuesday.

The Board of County Commission has asked constitutional officers, if possible, to hold their budget increases to 2% as a whole for the year that starts Oct. 1. It would help the county build financial reserves against an emergency.

Germaine has a 2.5% increase, “which I think is reasonable,” he said. “Please let me keep my half percent.”

The extra half of a percent, he said, amounts to nearly $21,000 of much-needed funds in the new fiscal year.

The Clerk’s Office has taken over some programs recently, like the Law Library, and the Clerk will need to cover a 13.5% increase in insurance costs out of the $21,000.

“It’s tough for me to face them and say I can’t put in a COLA this year,” Germaine said. “They need the increase. Everybody’s got to have a job.”

A man covers his nose with his shirt, left, as Luis Negron, a Miami Beach code compliance officer, right, talks to him about wearing a protective face mask amid the coronavirus pandemic, Friday, July 24 on Ocean Drive in Miami Beach, Fla. Masks are mandated both indoors and outdoors in Miami Beach.

ORLANDO — Florida’s top business regulator said Saturday that he planned to set up meetings with bar owners to discuss how they can reopen their businesses again safely, as the Sunshine State surpassed New York State in the total number of coronavirus cases.

Halsey Beshears, secretary of the Florida Department of Business and Professional Regulation, said he planned to start setting up meetings with owners of bars and breweries across the state later this week to discuss how they can reopen without spreading the virus.

Late last month, Florida banned alcohol consumption at its bars, for the second time this year, in response to a spike in the number of coronavirus cases.

“We will come up with a Safe, Smart and Step-by-step plan based on input, science and relative facts on how to reopen as soon as possible,” Beshears tweeted.

Last week, members of Florida’s craft brewing industry sent a letter to Beshears and Gov. Ron DeSantis, warning that almost a third of the 320 craft breweries in Florida could be forced to go out of business in the upcoming weeks if the restriction on on-site consumption continues.

“The health of our community is paramount, but it cannot be at the life savings of hundreds of entrepreneurs, the livelihood of thousands of families and the majority of an entire industry,” the letter said.

Florida may have set an unwanted milestone, but for the most part Sunday’s release of COVID-19 numbers by the Florida Department of Health saw a bit of improvement over previous days. There were 9,345 new cases reported and the positivity rate was 11.06%, which is still higher than the 5% recommended by the World Health Organization for reopening, but is the second-lowest number seen in the past two weeks.

Florida moved past New York for having the second-largest amount of cases in the United States, but Florida has seen fewer than 20% of the deaths New York had.

The number of people currently hospitalized in the state due to COVID-19 dropped by 97 from Saturday’s report and the median age has been holding at 40 to 42 years of age each day for the past two weeks. While those age 44 and younger make up more than 57% of all cases in the state, they account for just 3% of the deaths.

Locally, there was an increase of 21 cases in Highlands County, bringing the total to 1,039. The positivity rate was 11.3%.

The death toll remained at 22 in the county and there were three new hospital admissions, but also three discharges, keeping the number currently hospitalized at 54.

In nearby counties, it was a much better day for Glades County, which saw its largest jump on Saturday with 91 new cases, but added no new cases with the release of Sunday’s numbers. Many of Glades’ cases have been correctional facility related, with 244 of the 385 cases in the county coming from correctional facilities.

In DeSoto County, there were nine new cases recorded, which is the first time they have seen a single-digit increase since July 17, but as was the case with Glades and Hardee counties, testing was also down a bit from the past few days.

In Okeechobee County, the number climbed 10 to 812. The median age of the new cases was just 26, which is well under the median age of 36 overall for cases in the county.

The global count hit 16.15 million, according to John Hopkins University Center for Systems Science and Engineering. There have been 646,837 deaths. 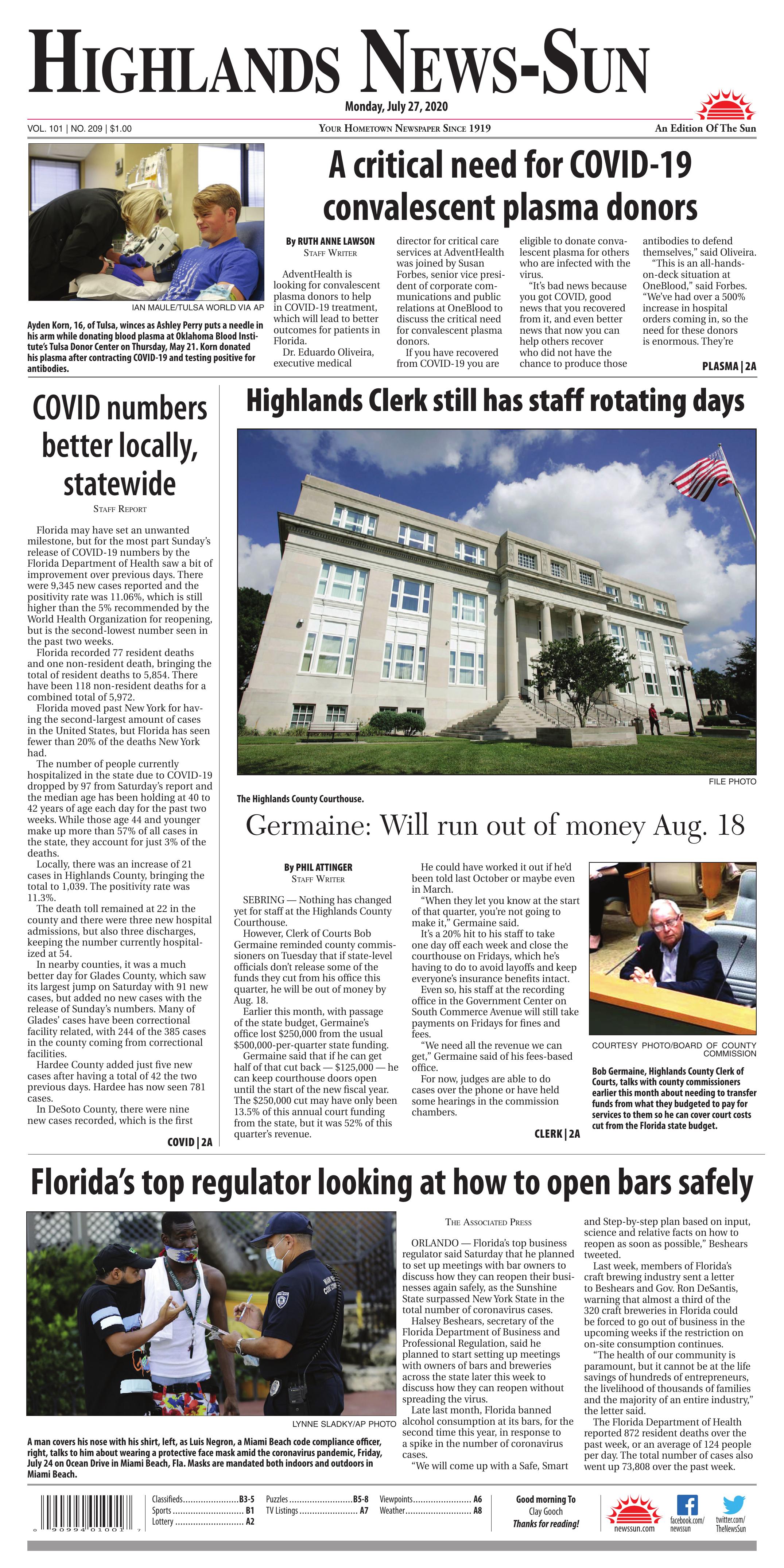