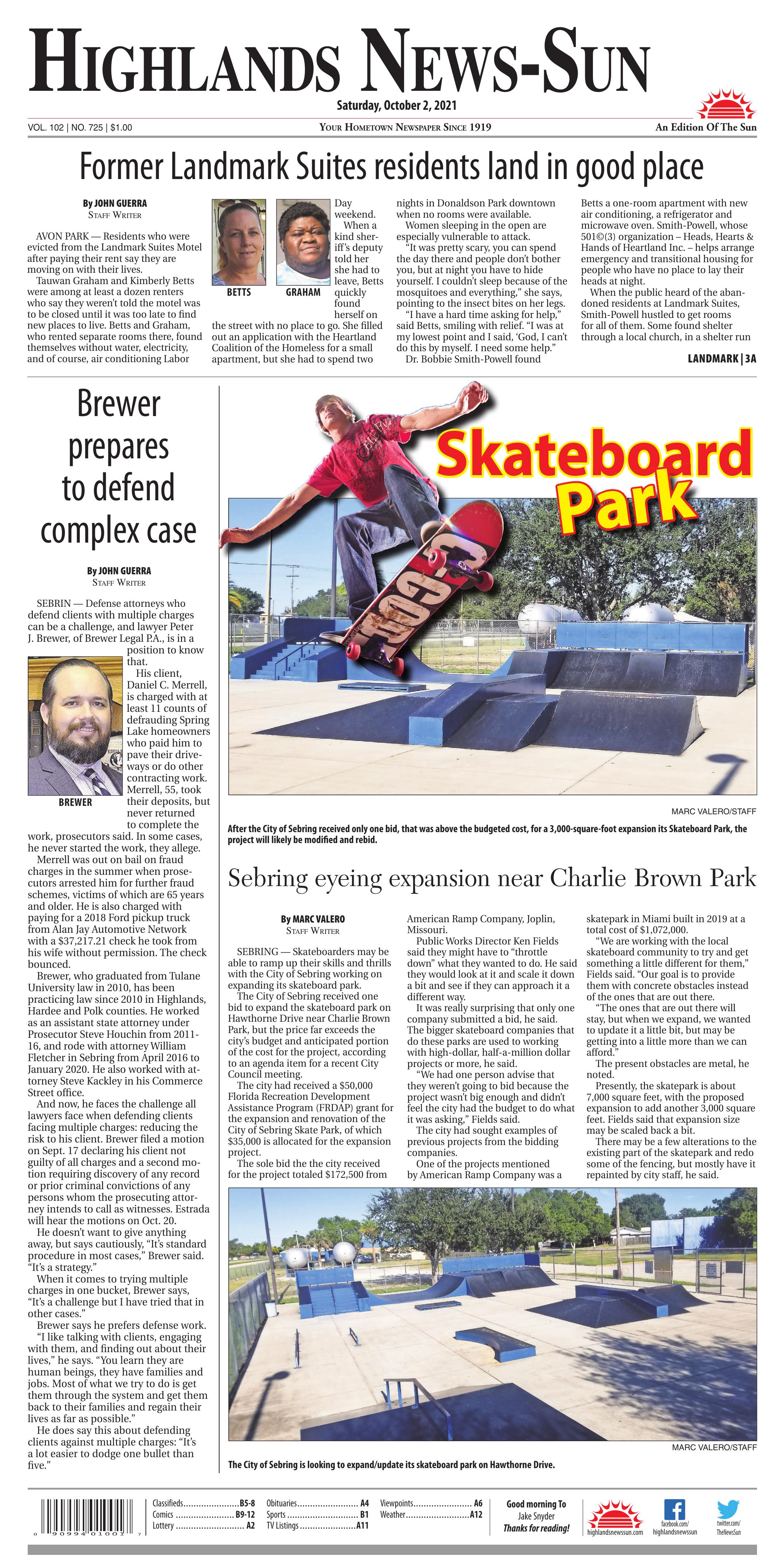 AVON PARK — Residents who were evicted from the Landmark Suites Motel after paying their rent say they are moving on with their lives.

Tauwan Graham and Kimberly Betts were among at least a dozen renters who say they weren’t told the motel was to be closed until it was too late to find new places to live. Betts and Graham, who rented separate rooms there, found themselves without water, electricity, and of course, air conditioning Labor Day weekend.

When a kind sheriff’s deputy told her she had to leave, Betts quickly found herself on the street with no place to go. She filled out an application with the Heartland Coalition of the Homeless for a small apartment, but she had to spend two nights in Donaldson Park downtown when no rooms were available.

Women sleeping in the open are especially vulnerable to attack.

“It was pretty scary, you can spend the day there and people don’t bother you, but at night you have to hide yourself. I couldn’t sleep because of the mosquitoes and everything,” she says, pointing to the insect bites on her legs.

“I have a hard time asking for help,” said Betts, smiling with relief. “I was at my lowest point and I said, ‘God, I can’t do this by myself. I need some help.”

Dr. Bobbie Smith-Powell found Betts a one-room apartment with new air conditioning, a refrigerator and microwave oven. Smith-Powell, whose 501©(3) organization – Heads, Hearts & Hands of Heartland Inc. – helps arrange emergency and transitional housing for people who have no place to lay their heads at night.

When the public heard of the abandoned residents at Landmark Suites, Smith-Powell hustled to get rooms for all of them. Some found shelter through a local church, in a shelter run by Smith-Powell and her husband, and other homes.

HHHH is a subcontractor for Heartland Coalition For the Homeless, whose executive director is Brenda Gray. Gray administers a Housing and Urban Development grant that helps people affected by COVID-19 job loss.

“Dr. Bobbie helped me find this apartment, which helped me look for work,” she said. “A big issue I faced was where to put all my stuff when I applied for jobs. I had a big duffle bag I carried on my back and whatever fit in my bicycle basket. I can’t go to a job interview with all that stuff.”

She now has the privacy necessary to rest, reflect and rejuvenate.

Betts now has a job at McDonald’s, which she says pays pretty well. “I will be able to pay rent and start my life again.”

Graham, a polite young man who also was among the last three residents of Landmark Suites, found help through Smith-Powell and her organization.

“It feels better to have a place to live,” Graham said. “This will never get shut down anytime soon.”

Graham pays his rent as before, from checks he receives every month. He also wants to find work but pledges to lose weight while doing so. He has a place to lay his head and to think, to make plans.

“I was having back problems because of my weight,” he said. “I have to lose this so I don’t have problems working.”

He said the landlord who was losing the property collected his rent knowing the motel had been sold weeks earlier. “He collected most of the people’s checks, too, before he left, he didn’t let everyone know right away,” Graham said.

“They came on Sept. 14, changed the locks, and at that point I was the last one there,” Betts said. “According to a sheriff’s deputy, the place sold in June, and I paid rent for July and August.”

Mark Cheeley, the former owner of the motel, told the Highlands News-Sun that he collected rent from the residents after it sold but mailed the money to lawyers representing the man taking the motel back from him.

Pompano Beach Attorney David R. Roy represents the company that loaned Cheeley the money to buy the motel. Cheeley has not sent rent payments to his office for at least 17 months, the lawyer said.

“The last payment received from Mr. Cheeley was March of 2020 and he hasn’t paid taxes since 2019 or thereafter,” Roy wrote in an email to the Highlands News-Sun. “Nor has he kept the place insured; neither my office nor my client have received a dime from anyone.”

By the way, HHHH also operates a mobile shower and laundry for homeless people, as well as a food line on Harris Street in Sebring. The organization needs donations to repair a pickup truck with which it pulls the mobile shower. They also hope to find someone to donate a fixer-upper house for HHHH’s use. The property owners need not transfer ownership to HHHH.

The City of Sebring is looking to expand/update its skateboard park on Hawthorne Drive.

After the City of Sebring received only one bid, that was above the budgeted cost, for a 3,000-square-foot expansion its Skateboard Park, the project will likely be modified and rebid.

SEBRING — Skateboarders may be able to ramp up their skills and thrills with the City of Sebring working on expanding its skateboard park.

The City of Sebring received one bid to expand the skateboard park on Hawthorne Drive near Charlie Brown Park, but the price far exceeds the city’s budget and anticipated portion of the cost for the project, according to an agenda item for a recent City Council meeting.

The city had received a $50,000 Florida Recreation Development Assistance Program (FRDAP) grant for the expansion and renovation of the City of Sebring Skate Park, of which $35,000 is allocated for the expansion project.

The sole bid the the city received for the project totaled $172,500 from American Ramp Company, Joplin, Missouri.

Public Works Director Ken Fields said they might have to “throttle down” what they wanted to do. He said they would look at it and scale it down a bit and see if they can approach it a different way.

It was really surprising that only one company submitted a bid, he said. The bigger skateboard companies that do these parks are used to working with high-dollar, half-a-million dollar projects or more, he said.

“We had one person advise that they weren’t going to bid because the project wasn’t big enough and didn’t feel the city had the budget to do what it was asking,” Fields said.

The city had sought examples of previous projects from the bidding companies.

One of the projects mentioned by American Ramp Company was a skatepark in Miami built in 2019 at a total cost of $1,072,000.

“We are working with the local skateboard community to try and get something a little different for them,” Fields said. “Our goal is to provide them with concrete obstacles instead of the ones that are out there.

“The ones that are out there will stay, but when we expand, we wanted to update it a little bit, but may be getting into a little more than we can afford.”

The present obstacles are metal, he noted.

There may be a few alterations to the existing part of the skatepark and redo some of the fencing, but mostly have it repainted by city staff, he said.

SEBRIN — Defense attorneys who defend clients with multiple charges can be a challenge, and lawyer Peter J. Brewer, of Brewer Legal P.A., is in a position to know that.

His client, Daniel C. Merrell, is charged with at least 11 counts of defrauding Spring Lake homeowners who paid him to pave their driveways or do other contracting work. Merrell, 55, took their deposits, but never returned to complete the work, prosecutors said. In some cases, he never started the work, they allege.

Merrell was out on bail on fraud charges in the summer when prosecutors arrested him for further fraud schemes, victims of which are 65 years and older. He is also charged with paying for a 2018 Ford pickup truck from Alan Jay Automotive Network with a $37,217.21 check he took from his wife without permission. The check bounced.

Brewer, who graduated from Tulane University law in 2010, has been practicing law since 2010 in Highlands, Hardee and Polk counties. He worked as an assistant state attorney under Prosecutor Steve Houchin from 2011-16, and rode with attorney William Fletcher in Sebring from April 2016 to January 2020. He also worked with attorney Steve Kackley in his Commerce Street office.

And now, he faces the challenge all lawyers face when defending clients facing multiple charges: reducing the risk to his client. Brewer filed a motion on Sept. 17 declaring his client not guilty of all charges and a second motion requiring discovery of any record or prior criminal convictions of any persons whom the prosecuting attorney intends to call as witnesses. Estrada will hear the motions on Oct. 20.

He doesn’t want to give anything away, but says cautiously, “It’s standard procedure in most cases,” Brewer said. “It’s a strategy.”

When it comes to trying multiple charges in one bucket, Brewer says, “It’s a challenge but I have tried that in other cases.”

“I like talking with clients, engaging with them, and finding out about their lives,” he says. “You learn they are human beings, they have families and jobs. Most of what we try to do is get them through the system and get them back to their families and regain their lives as far as possible.”

He does say this about defending clients against multiple charges: “It’s a lot easier to dodge one bullet than five.”