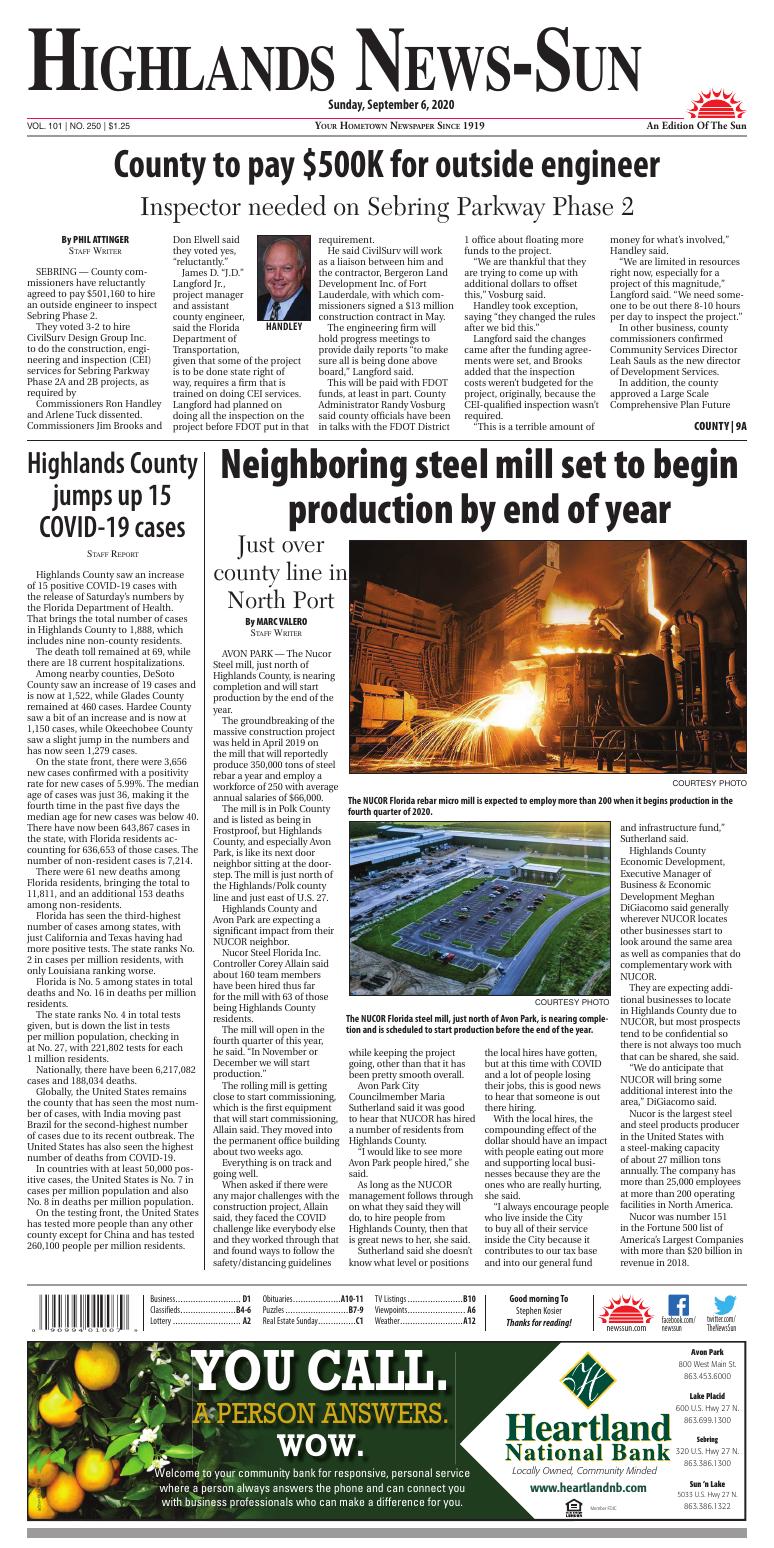 SEBRING — County commissioners have reluctantly agreed to pay $501,160 to hire an outside engineer to inspect Sebring Phase 2.

They voted 3-2 to hire CivilSurv Design Group Inc. to do the construction, engineering and inspection (CEI) services for Sebring Parkway Phase 2A and 2B projects, as required by

James D. “J.D.” Langford Jr., project manager and assistant county engineer, said the Florida Department of Transportation, given that some of the project is to be done state right of way, requires a firm that is trained on doing CEI services. Langford had planned on doing all the inspection on the project before FDOT put in that requirement.

He said CivilSurv will work as a liaison between him and the contractor, Bergeron Land Development Inc. of Fort Lauderdale, with which commissioners signed a $13 million construction contract in May.

The engineering firm will hold progress meetings to provide daily reports “to make sure all is being done above board,” Langford said.

This will be paid with FDOT funds, at least in part. County Administrator Randy Vosburg said county officials have been in talks with the FDOT District 1 office about floating more funds to the project.

“We are thankful that they are trying to come up with additional dollars to offset this,” Vosburg said.

Handley took exception, saying “they changed the rules after we bid this.”

Langford said the changes came after the funding agreements were set, and Brooks added that the inspection costs weren’t budgeted for the project, originally, because the CEI-qualified inspection wasn’t required.

“This is a terrible amount of money for what’s involved,” Handley said.

“We are limited in resources right now, especially for a project of this magnitude,” Langford said. “We need someone to be out there 8-10 hours per day to inspect the project.”

It sits south of Lake Little Redwater, east of Lake Sebring and north of Sebring Parkway, with Panther Parkway separating it into two parcels.

The commission also approved a construction agreement between the county and Excavation Point Inc. for construction of Thunderbird East and West Sidewalk Extension Projects for $541,523.

The county voted 3-2, with Handley and Commissioner Greg Harris to offer up to $25,000 for 13 acres at 170 Anderson Street, on the east side of Highway Park, where there is a boat ramp on Lake Huntley.

County Engineer Clinton Howerton Jr. said the majority of the property is wetlands on the lake side. On the west side, it’s xeric scrub, an evergreen plant community dominated by shrubs and dwarf oaks that are adapted to hot and dry conditions.

Howerton said he wasn’t sure what the use might be for the entire parcel. County officials are mostly concerned with the ramp and pavilion by the lake.

Removing those would cost $15,000, according to Facilities Manager Rick Fleeger.

Tuck suggested offering the owner $50,000 over a five-year period at 2%-3% interest, based on her recollection that the owner had a previous asking price of $60,000

Vosburg said the county could probably pay that price outright, without financing.

AVON PARK — The Nucor Steel mill, just north of Highlands County, is nearing completion and will start production by the end of the year.

The groundbreaking of the massive construction project was held in April 2019 on the mill that will reportedly produce 350,000 tons of steel rebar a year and employ a workforce of 250 with average annual salaries of $66,000.

The mill is in Polk County and is listed as being in Frostproof, but Highlands County, and especially Avon Park, is like its next door neighbor sitting at the doorstep. The mill is just north of the Highlands/Polk county line and just east of U.S. 27.

Highlands County and Avon Park are expecting a significant impact from their NUCOR neighbor.

Nucor Steel Florida Inc. Controller Corey Allain said about 160 team members have been hired thus far for the mill with 63 of those being Highlands County residents.

The mill will open in the fourth quarter of this year, he said. “In November or December we will start production.”

Everything is on track and going well.

When asked if there were any major challenges with the construction project, Allain said, they faced the COVID challenge like everybody else and they worked through that and found ways to follow the safety/distancing guidelines while keeping the project going, other than that it has been pretty smooth overall.

Avon Park City Councilmember Maria Sutherland said it was good to hear that NUCOR has hired a number of residents from Highlands County.

“I would like to see more Avon Park people hired,” she said.

As long as the NUCOR management follows through on what they said they will do, to hire people from Highlands County, then that is great news to her, she said.

Sutherland said she doesn’t know what level or positions the local hires have gotten, but at this time with COVID and a lot of people losing their jobs, this is good news to hear that someone is out there hiring.

With the local hires, the compounding effect of the dollar should have an impact with people eating out more and supporting local businesses because they are the ones who are really hurting, she said.

“I always encourage people who live inside the City to buy all of their service inside the City because it contributes to our tax base and into our general fund and infrastructure fund,” Sutherland said.

Highlands County Economic Development, Executive Manager of Business & Economic Development Meghan DiGiacomo said generally wherever NUCOR locates other businesses start to look around the same area as well as companies that do complementary work with NUCOR.

They are expecting additional businesses to locate in Highlands County due to NUCOR, but most prospects tend to be confidential so there is not always too much that can be shared, she said.

“We do anticipate that NUCOR will bring some additional interest into the area,” DiGiacomo said.

Nucor was number 151 in the Fortune 500 list of America’s Largest Companies with more than $20 billion in revenue in 2018.

Highlands County saw an increase of 15 positive COVID-19 cases with the release of Saturday’s numbers by the Florida Department of Health. That brings the total number of cases in Highlands County to 1,888, which includes nine non-county residents.

The death toll remained at 69, while there are 18 current hospitalizations.

On the state front, there were 3,656 new cases confirmed with a positivity rate for new cases of 5.99%. The median age of cases was just 36, making it the fourth time in the past five days the median age for new cases was below 40. There have now been 643,867 cases in the state, with Florida residents accounting for 636,653 of those cases. The number of non-resident cases is 7,214.

There were 61 new deaths among Florida residents, bringing the total to 11,811, and an additional 153 deaths among non-residents.

Florida has seen the third-highest number of cases among states, with just California and Texas having had more positive tests. The state ranks No. 2 in cases per million residents, with only Louisiana ranking worse.

Florida is No. 5 among states in total deaths and No. 16 in deaths per million residents.

The state ranks No. 4 in total tests given, but is down the list in tests per million population, checking in at No. 27, with 221,802 tests for each 1 million residents.

On the testing front, the United States has tested more people than any other county except for China and has tested 260,100 people per million residents. 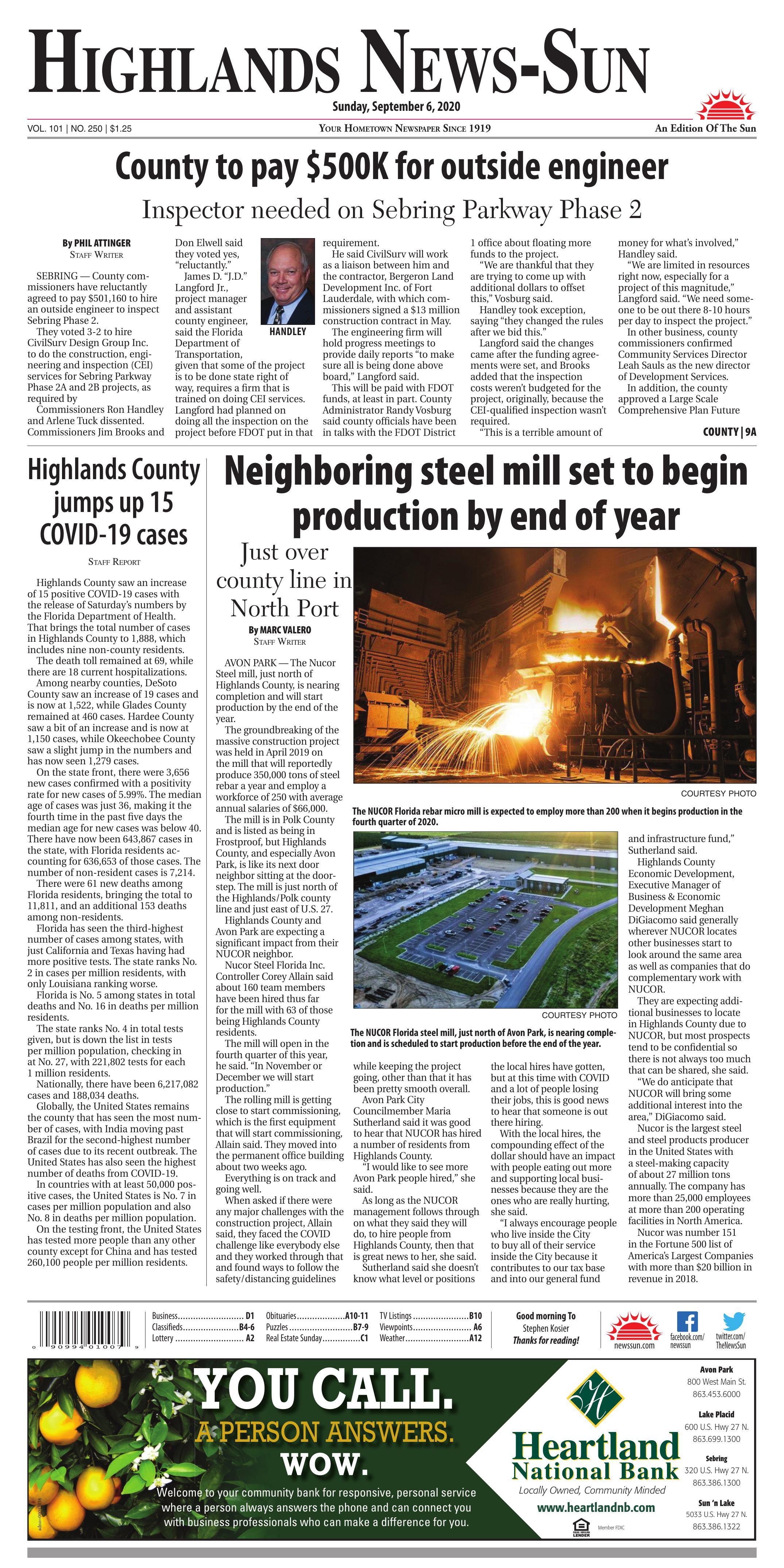