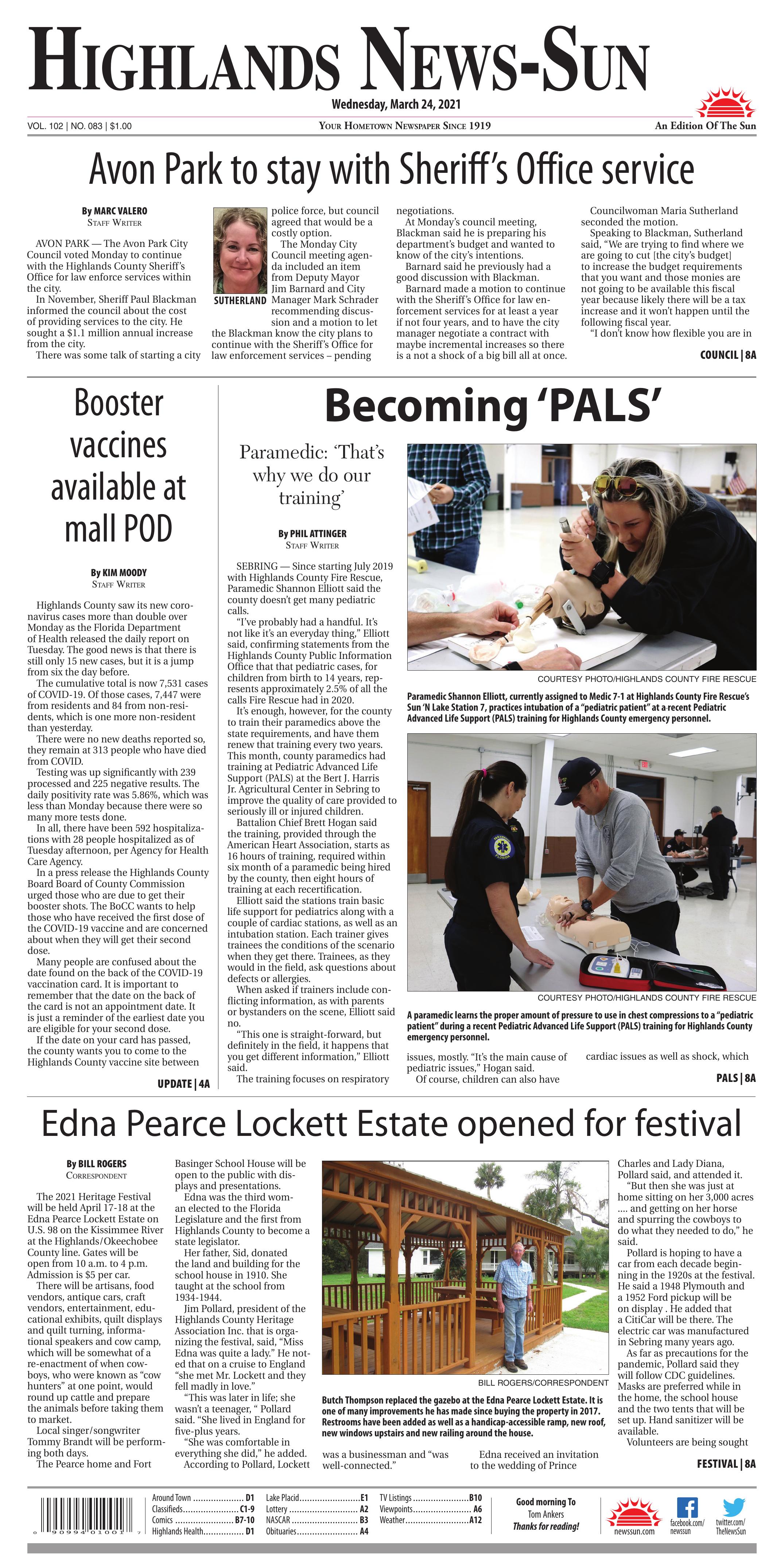 In November, Sheriff Paul Blackman informed the council about the cost of providing services to the city. He sought a $1.1 million annual increase from the city.

There was some talk of starting a city police force, but council agreed that would be a costly option.

At Monday’s council meeting, Blackman said he is preparing his department’s budget and wanted to know of the city’s intentions.

Barnard said he previously had a good discussion with Blackman.

Barnard made a motion to continue with the Sheriff’s Office for law enforcement services for at least a year if not four years, and to have the city manager negotiate a contract with maybe incremental increases so there is a not a shock of a big bill all at once.

Speaking to Blackman, Sutherland said, “We are trying to find where we are going to cut [the city’s budget] to increase the budget requirements that you want and those monies are not going to be available this fiscal year because likely there will be a tax increase and it won’t happen until the following fiscal year.

“I don’t know how flexible you are in that whole realm of discussion, because I would not want to go into an agreement knowing that we don’t have the money and again we will be in the same predicament next year.”

Blackman said, “It is not what I want, it is what the citizens need for their protection, there is a big difference there.”

In his conversation with Barnard and Schrader, “We are flexible,” Blackman said. “We are asking for $1.1 million roughly to get to where we need to be in addition to your current $1.4 million.

“So I am not unrealistic to realize that you all can’t come with that in time especially in the middle of a fiscal year. So we will definitely be flexible in trying to work through that together.”

Council voted 4-0 in favor of the motion to continue with the Sheriff’s Office for law enforcement services within the City of Avon Park.

Councilwoman Shirley Johnson abstained from voting because she works for the Sherriff’s Office.

Sutherland said Tuesday, “return on investment” may be an area the city will have to use to come up with the funding for the sheriff’s services.

There will likely be an increase in taxes, she said.

A paramedic learns the proper amount of pressure to use in chest compressions to a “pediatric patient” during a recent Pediatric Advanced Life Support (PALS) training for Highlands County emergency personnel.

“I’ve probably had a handful. It’s not like it’s an everyday thing,” Elliott said, confirming statements from the Highlands County Public Information Office that that pediatric cases, for children from birth to 14 years, represents approximately 2.5% of all the calls Fire Rescue had in 2020.

It’s enough, however, for the county to train their paramedics above the state requirements, and have them renew that training every two years. This month, county paramedics had training at Pediatric Advanced Life Support (PALS) at the Bert J. Harris Jr. Agricultural Center in Sebring to improve the quality of care provided to seriously ill or injured children.

Battalion Chief Brett Hogan said the training, provided through the American Heart Association, starts as 16 hours of training, required within six month of a paramedic being hired by the county, then eight hours of training at each recertification.

Elliott said the stations train basic life support for pediatrics along with a couple of cardiac stations, as well as an intubation station. Each trainer gives trainees the conditions of the scenario when they get there. Trainees, as they would in the field, ask questions about defects or allergies.

When asked if trainers include conflicting information, as with parents or bystanders on the scene, Elliott said no.

“This one is straight-forward, but definitely in the field, it happens that you get different information,” Elliott said.

The training focuses on respiratory issues, mostly. “It’s the main cause of pediatric issues,” Hogan said.

Of course, children can also have cardiac issues as well as shock, which could be from infection, blood loss or just dehydration.

“The big thing about children is they are resilient and can compensate at the same time,” Hogan said. “They will compensate well, until they don’t, [and] go downhill fast.”

Elliott said not only are children more resilient with physical trauma, in some ways, but children present a host of other alternate conditions from adults, especially seniors, who comprise the majority of Highlands County medical calls.

“Obviously, children are a lot smaller than us. That comes into play with our medication dosages,” Elliott said. “You really have to be careful. You can do damage with too much or not enough, or the wrong medication. The child might not be responsive at all when they arrive.

Elliott said one coworker had a pediatric code. Fortunately, she has had nothing like that, yet.

“But that’s why we do our training, you know, so we’re prepared and take care of what comes our way in an efficient manner,” Elliott said.

That’s why she likes the training.

“I like doing it. I’m grateful that we get the opportunities to do that,” Elliott said. “We don’t get a lot of pediatric calls.”

For Hogan, he likes the fact that the training every two years brings their pediatric mindset back to the forefront.

“It keeps us up to speed,” Hogan said.

It’s also part of what people need to bring with them to be a paramedic or emergency medical technician, Elliott said.

“Always be teachable, willing to learn,” Elliott said, emphasizing confidence with humility and preparation for the unexpected. “It doesn’t ever go as planned. Sometimes you do have those textbook scenarios. You just [have to] figure it out and do what’s best for the patient, and get them to the ER.”

Butch Thompson replaced the gazebo at the Edna Pearce Lockett Estate. It is one of many improvements he has made since buying the property in 2017. Restrooms have been added as well as a handicap-accessible ramp, new roof, new windows upstairs and new railing around the house.

An outhouse has been built on the property. It was made from an old barn that was torn down. One of the signs on the door says, “Wash your hands and say your prayers because Jesus and germs are everywhere.”

The 2021 Heritage Festival will be held April 17-18 at the Edna Pearce Lockett Estate on U.S. 98 on the Kissimmee River at the Highlands/Okeechobee County line. Gates will be open from 10 a.m. to 4 p.m. Admission is $5 per car.

There will be artisans, food vendors, antique cars, craft vendors, entertainment, educational exhibits, quilt displays and quilt turning, informational speakers and cow camp, which will be somewhat of a re-enactment of when cowboys, who were known as “cow hunters” at one point, would round up cattle and prepare the animals before taking them to market.

Local singer/songwriter Tommy Brandt will be performing both days.

The Pearce home and Fort Basinger School House will be open to the public with displays and presentations.

Edna was the third woman elected to the Florida Legislature and the first from Highlands County to become a state legislator.

Jim Pollard, president of the Highlands County Heritage Association Inc. that is organizing the festival, said, “Miss Edna was quite a lady.” He noted that on a cruise to England “she met Mr. Lockett and they fell madly in love.”

“This was later in life; she wasn’t a teenager, “ Pollard said. “She lived in England for five-plus years.

“She was comfortable in everything she did,” he added.

According to Pollard, Lockett was a businessman and “was well-connected.”

Edna received an invitation to the wedding of Prince Charles and Lady Diana, Pollard said, and attended it.

“But then she was just at home sitting on her 3,000 acres .... and getting on her horse and spurring the cowboys to do what they needed to do,” he said.

Pollard is hoping to have a car from each decade beginning in the 1920s at the festival. He said a 1948 Plymouth and a 1952 Ford pickup will be on display . He added that a CitiCar will be there. The electric car was manufactured in Sebring many years ago.

As far as precautions for the pandemic, Pollard said they will follow CDC guidelines. Masks are preferred while in the home, the school house and the two tents that will be set up. Hand sanitizer will be available.

Volunteers are being sought for the festival.

“This is a community-based activity, “ Pollard said. “We need people working throughout the buildings ... the school house or the estate. People will be needed for the information booths and to help with parking. “

They are seeking sponsorships for the event. Information about becoming a sponsor and the different levels of sponsorships is available by calling 813-763-1453.

The festival is the Highlands County Heritage Association Inc.’s first event. While the focus for this year is celebrating the county’s 100th birthday, the group is planning on doing this festival each year.

Highlands County saw its new coronavirus cases more than double over Monday as the Florida Department of Health released the daily report on Tuesday. The good news is that there is still only 15 new cases, but it is a jump from six the day before.

The cumulative total is now 7,531 cases of COVID-19. Of those cases, 7,447 were from residents and 84 from non-residents, which is one more non-resident than yesterday.

There were no new deaths reported so, they remain at 313 people who have died from COVID.

Testing was up significantly with 239 processed and 225 negative results. The daily positivity rate was 5.86%, which was less than Monday because there were so many more tests done.

In all, there have been 592 hospitalizations with 28 people hospitalized as of Tuesday afternoon, per Agency for Health Care Agency.

In a press release the Highlands County Board Board of County Commission urged those who are due to get their booster shots. The BoCC wants to help those who have received the first dose of the COVID-19 vaccine and are concerned about when they will get their second dose.

If the date on your card has passed, the county wants you to come to the Highlands County vaccine site between 8:30-11 a.m. any day the site is open.

The vaccine site is open Wednesdays, Thursdays, Fridays and Saturdays each week. It is inside the former JCPenney store at Lakeshore Mall.

Individuals must bring a photo ID, their vaccination card that shows the Highlands County Point of Distribution (POD) as the vaccine site, along with a completed consent form.

Visit bit.ly/HCvaccine to access and print a blank Moderna vaccine screening and consent form and fill it in ahead of time. Blank forms will also be available at the vaccine site to fill out prior to check in and prior to getting into line.

When coming to the vaccine site for your second dose, it is recommended that individuals park by the mall entrance near the former Kmart. You will access the vaccine site at JCPenney from inside the mall. Look for signs inside to direct you to the POD.