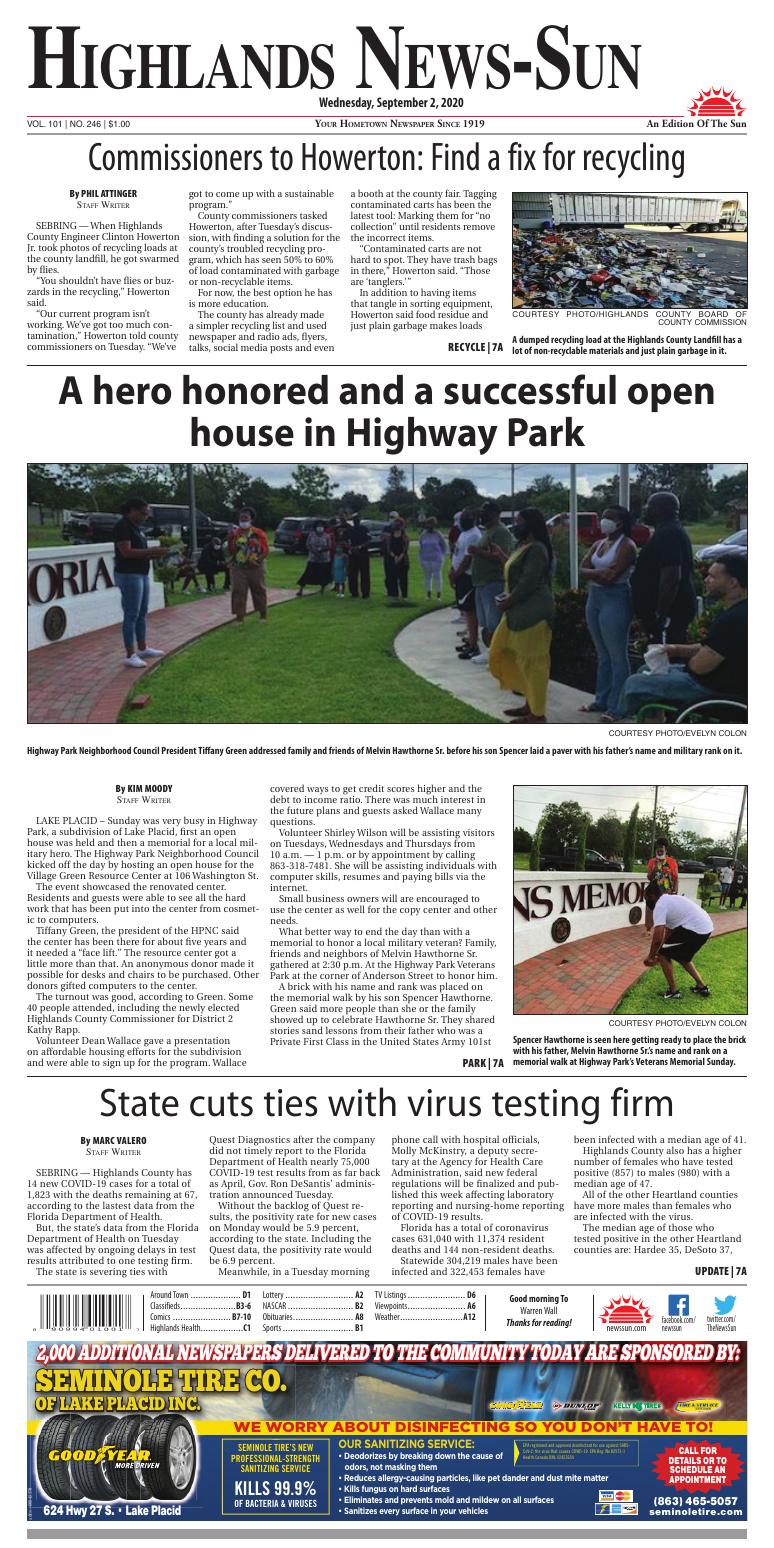 A dumped recycling load at the Highlands County Landfill has a lot of non-recyclable materials and just plain garbage in it. , said County Engineer Clinton Howerton Jr., who took the photo. He said he got swarmed with flies and saw buzzards, two animals that would never congregate around clean loads of recyclables.

SEBRING — When Highlands County Engineer Clinton Howerton Jr. took photos of recycling loads at the county landfill, he got swarmed by flies.

“You shouldn’t have flies or buzzards in the recycling,” Howerton said.

“Our current program isn’t working. We’ve got too much contamination,” Howerton told county commissioners on Tuesday. “We’ve got to come up with a sustainable program.”

County commissioners tasked Howerton, after Tuesday’s discussion, with finding a solution for the county’s troubled recycling program, which has seen 50% to 60% of load contaminated with garbage or non-recyclable items.

For now, the best option he has is more education.

The county has already made a simpler recycling list and used newspaper and radio ads, flyers, talks, social media posts and even a booth at the county fair. Tagging contaminated carts has been the latest tool: Marking them for “no collection” until residents remove the incorrect items.

“Contaminated carts are not hard to spot. They have trash bags in there,” Howerton said. “Those are ‘tanglers.’”

In addition to having items that tangle in sorting equipment, Howerton said food residue and just plain garbage makes loads unmarketable. They get tossed into the landfill and then won’t count toward the state goal of recycling 75% of the garbage stream.

Other options, Howerton said Tuesday, include making the program mandatory, bringing back the large-bin drop-off locations or even suspending the program until the market improves.

That last one, however, is not possible, he said: The state has mandated that all counties have an active recycling program and none of the 67 counties has tried to put it on hiatus.

More advertising and public education may do the trick, Howerton said, along with a “back-to-basics” campaign and an even simpler list.

In severe cases, the county may just replace recycling carts with garbage carts at problem locations.

All those options add additional costs, Howerton said, but education costs the least.

Howerton said the county could go back to twice-per-week garbage collection and once-a-week recycling, but that would need more drivers and would add $17-$19 per month to the residential garbage bill.

“I wanted to throw that out as an option,” he said.

Commissioners also discussed bringing back large bin drop-off locations. Hernando County uses them, Howerton said. Vehicles are weighed driving in and out and then people pay accordingly, just like at the landfill.

Commissioner Jim Brooks asked about the cost to staff such locations, and Howerton said it would be staffed six days per week, 10 hours per day, with an air-conditioned shelter/booth.

Commissioner Greg Harris asked if any counties are getting 75%, and Howerton said Charlotte County has a “robust program,” including grinding up waste concrete, but they don’t recycle that much.

Highlands County could get credit for the methane drawn off the landfill to power the asphalt plant, because it isn’t right now.

Harris asked if having an in-county sorting facility is an option, since loads are being trucked to Miami for that. Howerton said no. It’s not safe: Contaminated loads have too much broken glass.

People can recycle glass directly at the landfill, he said. The county used crushed glass for ground cover, but it’s not being recycled for profit and only contaminates loads right now.

“Whatever we do, the price is going to increase,” Brooks said. “I honestly think we’re spinning our wheels. We have three municipalities with a large portion of population and none of the three are recycling. The reason they’ve chosen not to do it is [the] cost.”

Commissioner Arlene Tuck said County Administrator Randy Vosburg had an idea to hold all recycling except one item, like cardboard.

“That will get it in their mind. Then add clean plastic or cans,” Tuck said. “Then after that, go to the next one, the jugs and the plastics.”

She also suggested education, which she’s seen work with her two 10-year-old grandsons, who are gung-ho for recycling.

Scott Kirouac, candidate for county commission, asked if drop-off locations would meet the requirement alone. Howerton said they could if they don’t result in more contamination.

Kirouac suggested that local officials will need to go to Tallahassee and get the Florida Department of Environmental Protection to back off on the 75% requirement.

Otherwise, he said, “this will never end.”

Commissioner Don Elwell pointed out that the county got a garbage hauling contract at “the best possible time” because it included recycling at a relative low price to current costs.

Of course, he said, one possible cause of current contamination may have been the suspension of recycling for a month this summer, which could result in both residents and truck drivers mixing garbage with the recycling once the service started back again.

“Not everyone got that second memo,” Elwell said.

He suggested that putting out mailers, then tagging cans for the first month might help.

Education is the key, an “omni-channel mix,” Elwell said. “Not everybody is on Facebook. Not everybody listens to the radio and not everyone reads the newspaper.”

He also said tagging bins needs to “have teeth to it” to reduce repeat offenders.

Commission Chair Ron Handley asked Waste Connections officials in the audience if they had people dumping both bins into the same truck and was told drivers aren’t doing that.

Elwell suggested involving the hauler in the costs for educating the public, “because it’s going to make their lives easier, as well.”

Spencer Hawthorne is seen here getting ready to place the brick with his father, Melvin Hawthorne Sr.’s name and rank on a memorial walk at Highway Park’s Veterans Memorial Sunday.

Highway Park Neighborhood Council President Tiffany Green addressed family and friends of Melvin Hawthorne Sr. before his son Spencer laid a paver with his father’s name and military rank on it.

Erika Treadwell and Teddy Callahan enjoy a conversation at the open house for the Village Green Resource Center on Sunday morning.

Dean Wallace in the red shirt educated attendants on programs offered by by the Village Green Resource Center.

LAKE PLACID – Sunday was very busy in Highway Park, a subdivision of Lake Placid, first an open house was held and then a memorial for a local military hero. The Highway Park Neighborhood Council kicked off the day by hosting an open house for the Village Green Resource Center at 106 Washington St.

The event showcased the renovated center. Residents and guests were able to see all the hard work that has been put into the center from cosmetic to computers.

Tiffany Green, the president of the HPNC said the center has been there for about five years and it needed a “face lift.” The resource center got a little more than that. An anonymous donor made it possible for desks and chairs to be purchased. Other donors gifted computers to the center.

The turnout was good, according to Green. Some 40 people attended, including the newly elected Highlands County Commissioner for District 2 Kathy Rapp.

Volunteer Dean Wallace gave a presentation on affordable housing efforts for the subdivision and were able to sign up for the program. Wallace covered ways to get credit scores higher and the debt to income ratio. There was much interest in the future plans and guests asked Wallace many questions.

Volunteer Shirley Wilson will be assisting visitors on Tuesdays, Wednesdays and Thursdays from 10 a.m. — 1 p.m. or by appointment by calling 863-318-7481. She will be assisting individuals with computer skills, resumes and paying bills via the internet.

Small business owners will are encouraged to use the center as well for the copy center and other needs.

What better way to end the day than with a memorial to honor a local military veteran? Family, friends and neighbors of Melvin Hawthorne Sr. gathered at 2:30 p.m. At the Highway Park Veterans Park at the corner of Anderson Street to honor him.

A brick with his name and rank was placed on the memorial walk by his son Spencer Hawthorne. Green said more people than she or the family showed up to celebrate Hawthorne Sr. They shared stories sand lessons from their father who was a Private First Class in the United States Army 101st Airborne Division from 1956-1958.

“It was about being proud of a family member,” Green said.

Green said much of the talk was about Hawthorne Sr.’s bravery as the 101st Airborne Division was sent by President Dwight D. Eisenhower sent to escort and protect the Little Rock Nine. The “Little Rock Nine,” as they become known, were nine black students who were harassed as they tried to attend the all-white Central High School in Arkansas in 1957.

In May 1954, Brown V. The Board of Education of Topeka Kansas ruled segregation as unconstitutional. In Sept. 1957, then Arkansas Governor Orval Faubus opposed integration and sent the National Guard to block the nine students from entering the school. He claimed it was to keep the peace because he thought there would be violence.

President Eisenhower put the National Guard under federal command and sent in the 101st Airborne, also known as the “Screaming Eagles.”

“He was very honored to be there,” daughter Ahisha Hawthorne said.

He had personal relationships with some of the nine students and called them by name, according to Ahisha. The 101st were scared but “very scared but brave.” Melvin Hawthorne Sr., she said, “was very proud about this time in history.”

After leaving the military, he was a successful businessman and community leader. The Hawthorne family has donated the land use to the Veterans Memorial and the Village Green Resource Center.

SEBRING — Highlands County has 14 new COVID-19 cases for a total of 1,823 with the deaths remaining at 67, according to the lastest data from the Florida Department of Health.

But, the state’s data from the Florida Department of Health on Tuesday was affected by ongoing delays in test results attributed to one testing firm.

The state is severing ties with Quest Diagnostics after the company did not timely report to the Florida Department of Health nearly 75,000 COVID-19 test results from as far back as April, Gov. Ron DeSantis’ administration announced Tuesday.

Meanwhile, in a Tuesday morning phone call with hospital officials, Molly McKinstry, a deputy secretary at the Agency for Health Care Administration, said new federal regulations will be finalized and published this week affecting laboratory reporting and nursing-home reporting of COVID-19 results.

Highlands County also has a higher number of females who have tested positive (857) to males (980) with a median age of 47.

All of the other Heartland counties have more males than females who are infected with the virus.

The median age of those who tested positive in the other Heartland counties are: Hardee 35, DeSoto 37, Okeechobee 38, Glades 39 and Hendry 37. 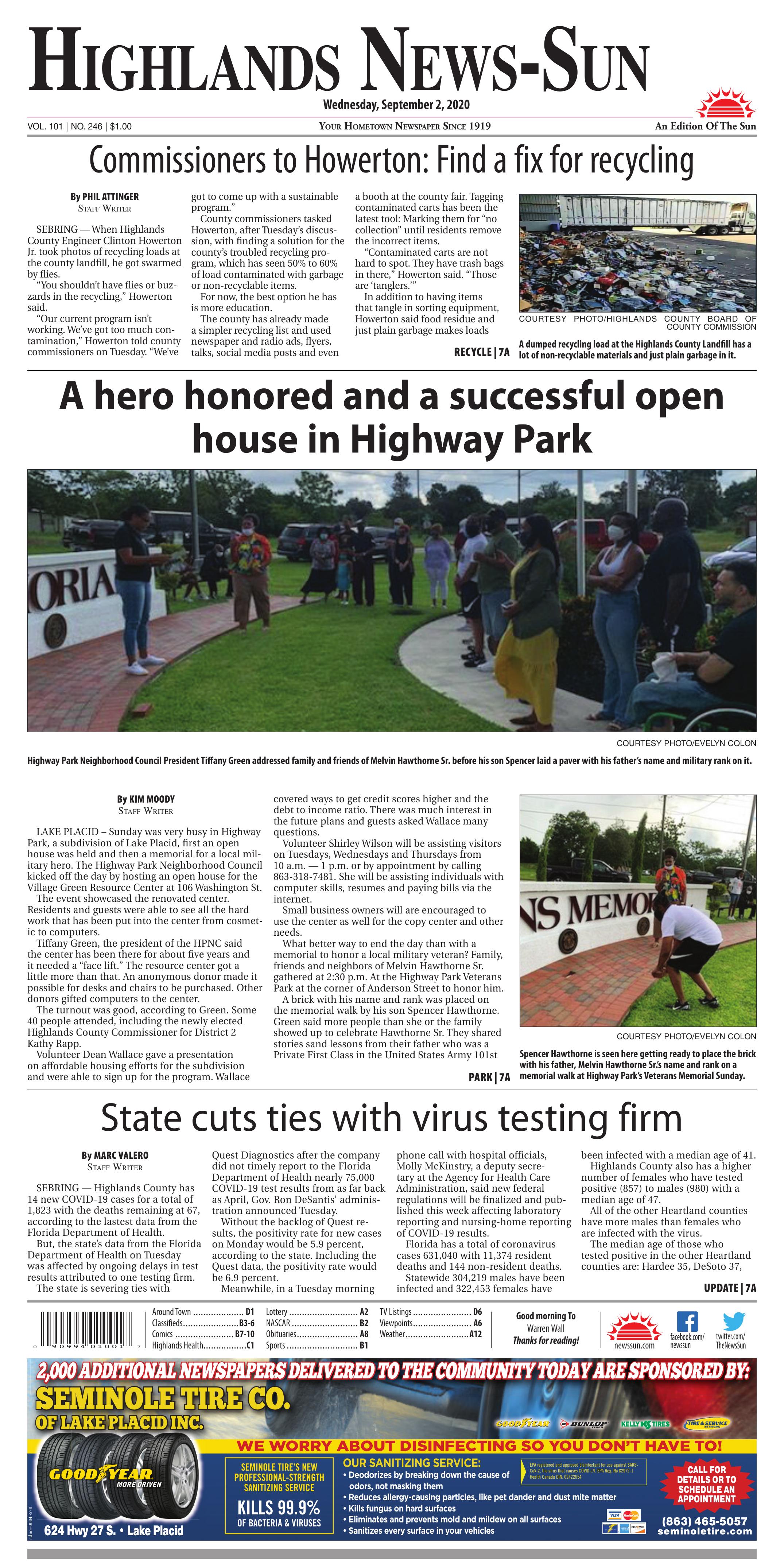