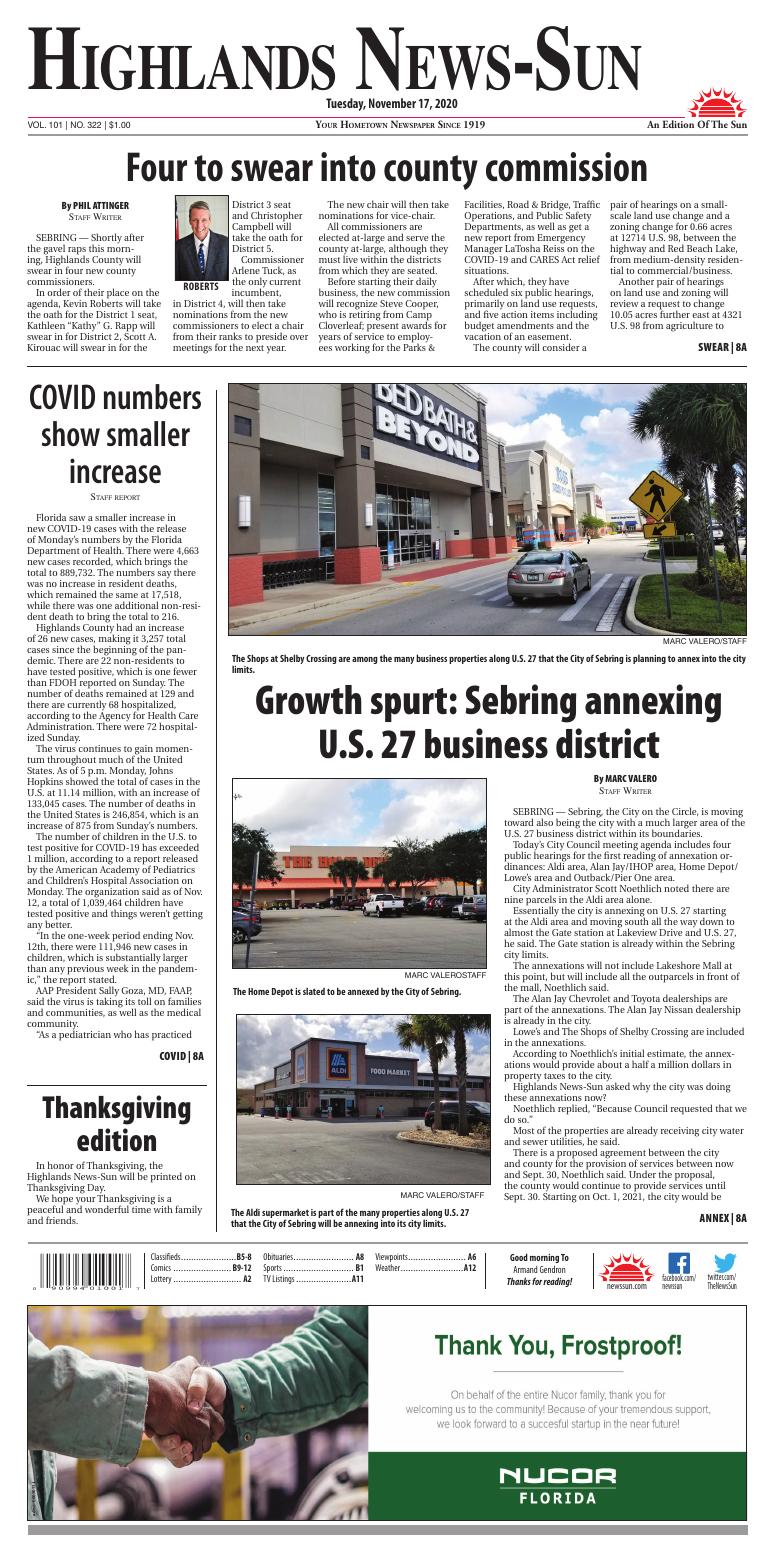 Commissioner Arlene Tuck, as the only current incumbent, in District 4, will then take nominations from the new commissioners to elect a chair from their ranks to preside over meetings for the next year.

The new chair will then take nominations for vice-chair.

All commissioners are elected at-large and serve the county at-large, although they must live within the districts from which they are seated.

Before starting their daily business, the new commission will recognize Steve Cooper, who is retiring from Camp Cloverleaf; present awards for years of service to employees working for the Parks & Facilities, Road & Bridge, Traffic Operations, and Public Safety Departments, as well as get a new report from Emergency Manager LaTosha Reiss on the COVID-19 and CARES Act relief situations.

After which, they have scheduled six public hearings, primarily on land use requests, and five action items including budget amendments and the vacation of an easement.

The county will consider a pair of hearings on a small-scale land use change and a zoning change for 0.66 acres at 12714 U.S. 98, between the highway and Red Beach Lake, from medium-density residential to commercial/business.

Another pair of hearings on land use and zoning will review a request to change 10.05 acres further east at 4321 U.S. 98 from agriculture to commercial/business. The site is on the south side of the highway, north of Lake Istokpoga, at the southwest intersection of U.S. 98 and Istokpoga Park Access Road.

A fifth hearing will consider an ordinance that, if passed, would allow landowners in Avon Park Lakes to divide their lots without having to replat the land if the newly-created parcels are at least one acre and have 100 feet of road frontage, or if the lot was divided prior to today — Nov. 17, 2020 — and created a divided portion that is smaller than an acre.

Commissioners will also have a resolution to consider closing the end portion of Alderman Drive, which runs from U.S. 27 in Lake Placid to lakeside homes on Lake Clay.

In the action agenda, commissioners will be asked to vacate an easement that runs through land at 6941 and 6945 San Bruno Drive in Sebring.

They also have budget amendments in front of them to rollover funds into projects, which would increase the General Fund by $135,018, the Transportation Trust Fund by $119,670, the Tourist Development Trust by $254,441 and the HCFPIRN Limited Capital Fund 335 by $21,283, while decreasing the Infrastructure Surtax Fund by $9.05 million, decreasing the county budget overall by $8.52 million.

The commission has a request from Human Resources to transition the county’s flexible spending accounts and COBRA administration from the old health insurance company to the newly-hired one, P&A Administrative Services Inc.

Several projects have been closed and required additional funds from the Infrastructure Surtax Reserve for Contingency, for a net decrease of $117,670.

The Clerk of Courts also has a budget amendment on the agenda, a year-end cleanup, which would increase the county’s General Fund by $274,355. Clerk of Courts Jerome Kaszubowski said that was because his office got $201,000 of CARES Act funding plus funding from two outside agencies — the Board and the Supervisor of Elections — for two current information technology professionals.

The county commission covered part of the $232,000 shortfall for the courts with $145,000 of CARES Act funding, Kaszubowski said. The rest of that, approximately $87,000, he said, was made up from furloughs and conservative spending.

The Shops at Shelby Crossing are among the many business properties along U.S. 27 that the City of Sebring is planning to annex into the city limits.

The Home Depot is slated to be annexed by the City of Sebring.

The Aldi supermarket is part of the many properties along U.S. 27 that the City of Sebring will be annexing into its city limits.

SEBRING — Sebring, the City on the Circle, is moving toward also being the city with a much larger area of the U.S. 27 business district within its boundaries.

Essentially the city is annexing on U.S. 27 starting at the Aldi area and moving south all the way down to almost the Gate station at Lakeview Drive and U.S. 27, he said. The Gate station is already within the Sebring city limits.

The annexations will not include Lakeshore Mall at this point, but will include all the outparcels in front of the mall, Noethlich said.

The Alan Jay Chevrolet and Toyota dealerships are part of the annexations. The Alan Jay Nissan dealership is already in the city.

Lowe’s and The Shops of Shelby Crossing are included in the annexations.

According to Noethlich’s initial estimate, the annexations would provide about a half a million dollars in property taxes to the city.

Highlands News-Sun asked why the city was doing these annexations now?

Noethlich replied, “Because Council requested that we do so.”

Most of the properties are already receiving city water and sewer utilities, he said.

There is a proposed agreement between the city and county for the provision of services between now and Sept. 30, Noethlich said. Under the proposal, the county would continue to provide services until Sept. 30. Starting on Oct. 1, 2021, the city would be providing services for law enforcement and fire department.

Changes in solid waste pickup would be different because it is governed by State Statute, which gives the contract provider (waste collection company) additional time based on the contract and franchise agreement.

The second and final reading of the annexation ordinances will be on the agenda for council’s Dec. 1 meeting.

Also on the agenda for the 6 p.m. Tuesday, City Council meeting, council will be considering a resolution on increasing the city’s utility rates.

At its Sept. 1 budget workshop, council directed city staff to increase all utility rates by 5%.

The agenda notes that all utility customers received notice of the proposed rate increase on their October billing statement.

A water and sewer customer inside the city using 8,000 gallons of water would see a monthly billing increase of $2.51.

Outside city water and sewer customers with the same water usage would see a $2.87 monthly increase, according to the agenda.

Florida saw a smaller increase in new COVID-19 cases with the release of Monday’s numbers by the Florida Department of Health. There were 4,663 new cases recorded, which brings the total to 889,732. The numbers say there was no increase in resident deaths, which remained the same at 17,518, while there was one additional non-resident death to bring the total to 216.

Highlands County had an increase of 26 new cases, making it 3,257 total cases since the beginning of the pandemic. There are 22 non-residents to have tested positive, which is one fewer than FDOH reported on Sunday. The number of deaths remained at 129 and there are currently 68 hospitalized, according to the Agency for Health Care Administration. There were 72 hospitalized Sunday.

The number of children in the U.S. to test positive for COVID-19 has exceeded 1 million, according to a report released by the American Academy of Pediatrics and Children’s Hospital Association on Monday. The organization said as of Nov. 12, a total of 1,039,464 children have tested positive and things weren’t getting any better.

“In the one-week period ending Nov. 12th, there were 111,946 new cases in children, which is substantially larger than any previous week in the pandemic,” the report stated.

AAP President Sally Goza, MD, FAAP, said the virus is taking its toll on families and communities, as well as the medical community.

“As a pediatrician who has practiced medicine for over three decades, I find this number staggering and tragic. We haven’t seen a virus flash through our communities in this way since before we had vaccines for measles and polio,” Goza said. “And while we wait for a vaccine to be tested and licensed to protect children from the virus that causes COVID-19, we must do more now to protect everyone in our communities.” 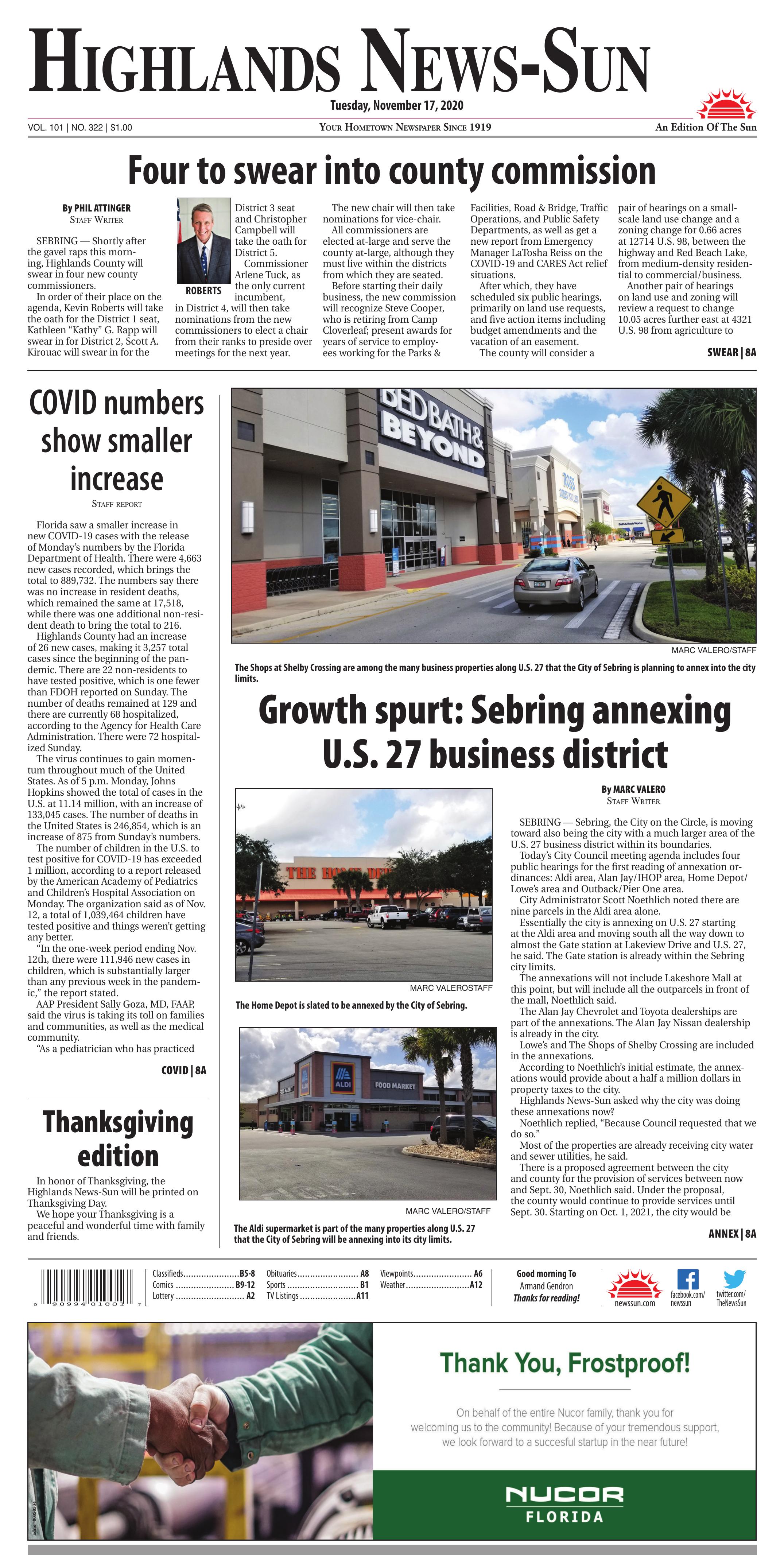