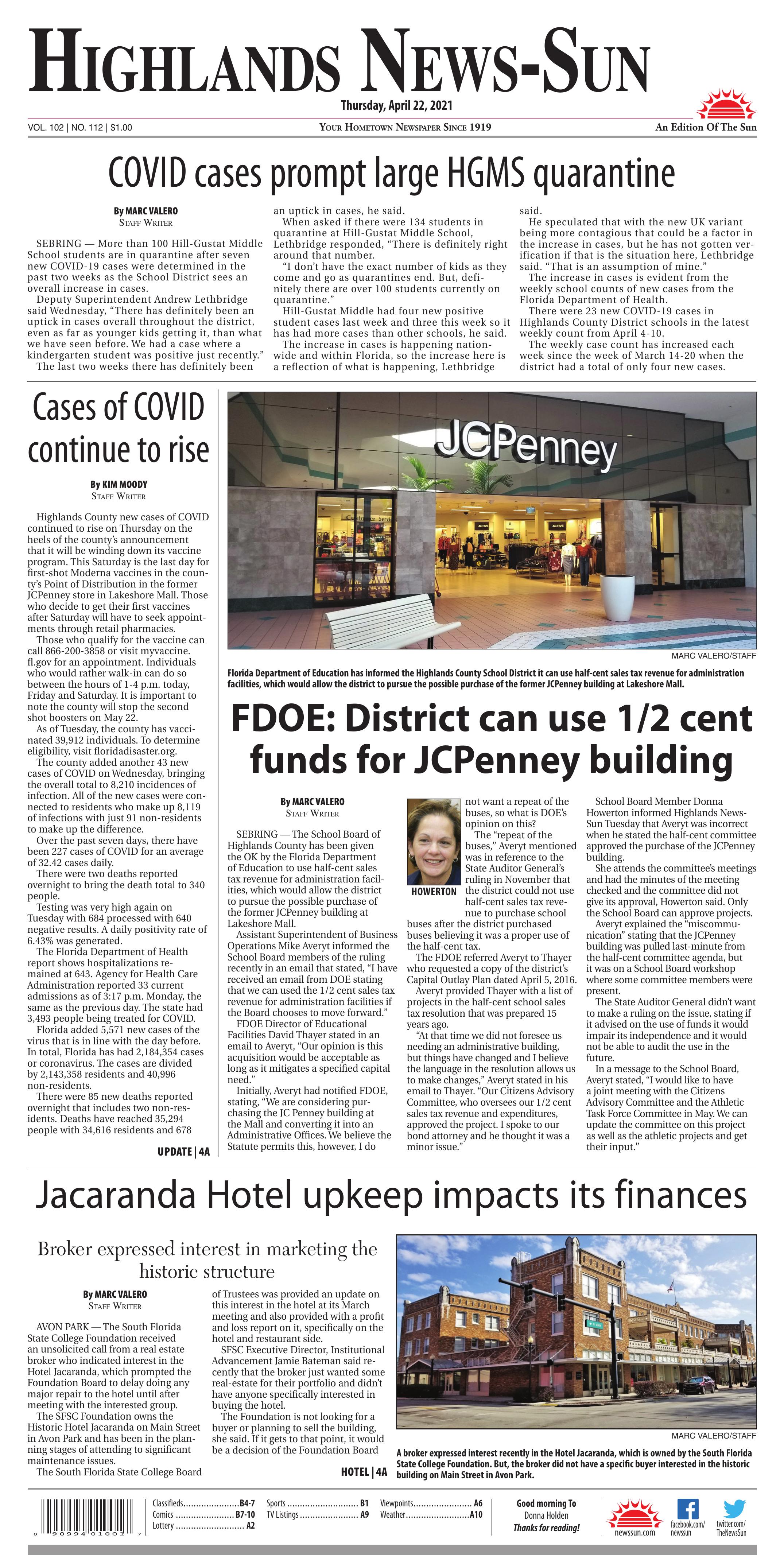 SEBRING — More than 100 Hill-Gustat Middle School students are in quarantine after seven new COVID-19 cases were determined in the past two weeks as the School District sees an overall increase in cases.

Deputy Superintendent Andrew Lethbridge said Wednesday, “There has definitely been an uptick in cases overall throughout the district, even as far as younger kids getting it, than what we have seen before. We had a case where a kindergarten student was positive just recently.”

The last two weeks there has definitely been an uptick in cases, he said.

When asked if there were 134 students in quarantine at Hill-Gustat Middle School, Lethbridge responded, “There is definitely right around that number.

“I don’t have the exact number of kids as they come and go as quarantines end. But, definitely there are over 100 students currently on quarantine.”

Hill-Gustat Middle had four new positive student cases last week and three this week so it has had more cases than other schools, he said.

He speculated that with the new UK variant being more contagious that could be a factor in the increase in cases, but he has not gotten verification if that is the situation here, Lethbridge said. “That is an assumption of mine.”

The increase in cases is evident from the weekly school counts of new cases from the Florida Department of Health.

There were 23 new COVID-19 cases in Highlands County District schools in the latest weekly count from April 4-10.

The weekly case count has increased each week since the week of March 14-20 when the district had a total of only four new cases.

Florida Department of Education has informed the Highlands County School District it can use half-cent sales tax revenue for administration facilities, which would allow the district to pursue the possible purchase of the former JCPenney building at Lakeshore Mall.

SEBRING — The School Board of Highlands County has been given the OK by the Florida Department of Education to use half-cent sales tax revenue for administration facilities, which would allow the district to pursue the possible purchase of the former JCPenney building at Lakeshore Mall.

Assistant Superintendent of Business Operations Mike Averyt informed the School Board members of the ruling recently in an email that stated, “I have received an email from DOE stating that we can used the 1/2 cent sales tax revenue for administration facilities if the Board chooses to move forward.”

FDOE Director of Educational Facilities David Thayer stated in an email to Averyt, “Our opinion is this acquisition would be acceptable as long as it mitigates a specified capital need.”

Initially, Averyt had notified FDOE, stating, “We are considering purchasing the JC Penney building at the Mall and converting it into an Administrative Offices. We believe the Statute permits this, however, I do not want a repeat of the buses, so what is DOE’s opinion on this?

The “repeat of the buses,” Averyt mentioned was in reference to the State Auditor General’s ruling in November that the district could not use half-cent sales tax revenue to purchase school buses after the district purchased buses believing it was a proper use of the half-cent tax.

The FDOE referred Averyt to Thayer who requested a copy of the district’s Capital Outlay Plan dated April 5, 2016.

Averyt provided Thayer with a list of projects in the half-cent school sales tax resolution that was prepared 15 years ago.

“At that time we did not foresee us needing an administrative building, but things have changed and I believe the language in the resolution allows us to make changes,” Averyt stated in his email to Thayer. “Our Citizens Advisory Committee, who oversees our 1/2 cent sales tax revenue and expenditures, approved the project. I spoke to our bond attorney and he thought it was a minor issue.”

School Board Member Donna Howerton informed Highlands News-Sun Tuesday that Averyt was incorrect when he stated the half-cent committee approved the purchase of the JCPenney building.

She attends the committee’s meetings and had the minutes of the meeting checked and the committee did not give its approval, Howerton said. Only the School Board can approve projects.

Averyt explained the “miscommunication” stating that the JCPenney building was pulled last-minute from the half-cent committee agenda, but it was on a School Board workshop where some committee members were present.

The State Auditor General didn’t want to make a ruling on the issue, stating if it advised on the use of funds it would impair its independence and it would not be able to audit the use in the future.

In a message to the School Board, Averyt stated, “I would like to have a joint meeting with the Citizens Advisory Committee and the Athletic Task Force Committee in May. We can update the committee on this project as well as the athletic projects and get their input.”

A broker expressed interest recently in the Hotel Jacaranda, which is owned by the South Florida State College Foundation. But, the broker did not have a specific buyer interested in the historic building on Main Street in Avon Park.

AVON PARK — The South Florida State College Foundation received an unsolicited call from a real estate broker who indicated interest in the Hotel Jacaranda, which prompted the Foundation Board to delay doing any major repair to the hotel until after meeting with the interested group.

The SFSC Foundation owns the Historic Hotel Jacaranda on Main Street in Avon Park and has been in the planning stages of attending to significant maintenance issues.

The South Florida State College Board of Trustees was provided an update on this interest in the hotel at its March meeting and also provided with a profit and loss report on it, specifically on the hotel and restaurant side.

SFSC Executive Director, Institutional Advancement Jamie Bateman said recently that the broker just wanted some real-estate for their portfolio and didn’t have anyone specifically interested in buying the hotel.

Concerning the profit and loss, Highlands News-Sun asked if the hotel was losing money?

“I wouldn’t necessarily say we are completely loosing money,” she said.

There are multiple facets underneath one roof – restaurant, hotel, Foundation offices, plus multiple areas with tenants and the dorm facility, Bateman explained. All of them are operated out of a different funding measure.

“It is not one business operating underneath one roof, it’s multiple facets,” she said.” So when you add in the different levels of income that come in based on the different types of businesses and business that is being done and you add in any maintenance fees of an almost 100-year-old building, there is going to be some differences.”

There could potentially be some negative impact in regards to the overall maintenance dollars that are going to be needed in order to maintain a very historical building, Bateman said. The cost of owning and operating a building of this size is greatly expensive, especially when it comes to the maintenance needs, which is what they were sharing with the Board of Trustees, she further explained.

At the October SFSC Board of Trustees meeting, Bateman noted some of the needs of the structure included: plumbing, electrical, entryways, dorm remodels, fire escapes, telephone system rewiring, replacement of upper roof and kitchen roof area and the elevator needs replacement. The total estimated cost was $1.3 million.

“They knew what they were doing when they built this building,” Bateman said. “She is so sound; she is a very sound structure. She’s 100 years old; she needs a little TLC.”

In 1988, the SFSC Foundation bought and renovated the Hotel Jacaranda to serve as student housing (for out-of-county student athletes), as an events venue for college and public activities, and as a teaching laboratory for Culinary and Hospitality Management students.

Highlands County new cases of COVID continued to rise on Thursday on the heels of the county’s announcement that it will be winding down its vaccine program. This Saturday is the last day for first-shot Moderna vaccines in the county’s Point of Distribution in the former JCPenney store in Lakeshore Mall. Those who decide to get their first vaccines after Saturday will have to seek appointments through retail pharmacies.

Those who qualify for the vaccine can call 866-200-3858 or visit myvaccine.fl.gov for an appointment. Individuals who would rather walk-in can do so between the hours of 1-4 p.m. today, Friday and Saturday. It is important to note the county will stop the second shot boosters on May 22.

As of Tuesday, the county has vaccinated 39,912 individuals. To determine eligibility, visit floridadisaster.org.

The county added another 43 new cases of COVID on Wednesday, bringing the overall total to 8,210 incidences of infection. All of the new cases were connected to residents who make up 8,119 of infections with just 91 non-residents to make up the difference.

Over the past seven days, there have been 227 cases of COVID for an average of 32.42 cases daily.

There were two deaths reported overnight to bring the death total to 340 people.

Testing was very high again on Tuesday with 684 processed with 640 negative results. A daily positivity rate of 6.43% was generated.

The Florida Department of Health report shows hospitalizations remained at 643. Agency for Health Care Administration reported 33 current admissions as of 3:17 p.m. Monday, the same as the previous day. The state had 3,493 people being treated for COVID.

There were 85 new deaths reported overnight that includes two non-residents. Deaths have reached 35,294 people with 34,616 residents and 678 non-residents.

FDOH is reporting 8,228,278 people have been vaccinated as of Tuesday.

There were 803 new deaths reported, which is 87 higher than the seven-day average of 716.

According to the Johns Hopkins University Center for Systems Science and Engineering, the U.S. has seen a total of 31.83 million cases and had 569,042 deaths.

Globally, there have been 143.3 million cases and 3.05 million deaths.