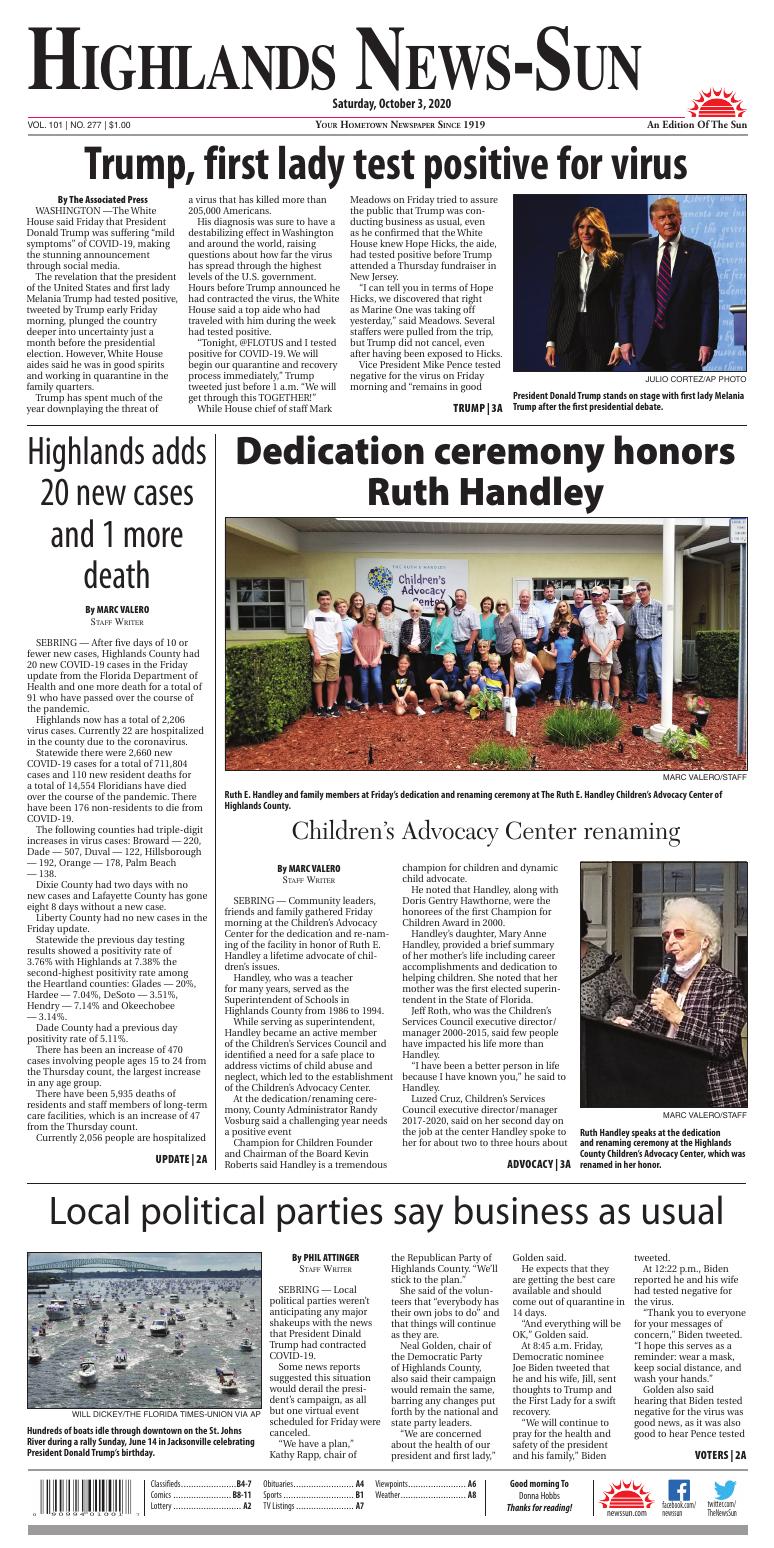 President Donald Trump speaks during a rally on Wednesday in Duluth, Minn.

The revelation that the president of the United States and first lady Melania Trump had tested positive, tweeted by Trump early Friday morning, plunged the country deeper into uncertainty just a month before the presidential election. However, White House aides said he was in good spirits and working in quarantine in the family quarters.

Trump has spent much of the year downplaying the threat of a virus that has killed more than 205,000 Americans.

His diagnosis was sure to have a destabilizing effect in Washington and around the world, raising questions about how far the virus has spread through the highest levels of the U.S. government. Hours before Trump announced he had contracted the virus, the White House said a top aide who had traveled with him during the week had tested positive.

“Tonight, @FLOTUS and I tested positive for COVID-19. We will begin our quarantine and recovery process immediately,” Trump tweeted just before 1 a.m. “We will get through this TOGETHER!”

While House chief of staff Mark Meadows on Friday tried to assure the public that Trump was conducting business as usual, even as he confirmed that the White House knew Hope Hicks, the aide, had tested positive before Trump attended a Thursday fundraiser in New Jersey.

“I can tell you in terms of Hope Hicks, we discovered that right as Marine One was taking off yesterday,” said Meadows. Several staffers were pulled from the trip, but Trump did not cancel, even after having been exposed to Hicks.

Vice President Mike Pence tested negative for the virus on Friday morning and “remains in good health,” his spokesman said.

Many White House and senior administration officials were undergoing tests Friday, but the full scale of the outbreak around the president may not be known for some time as it can take days for an infection to be detectable by a test. Officials with the White House Medical Unit were tracing the president’s contacts.

Trump was last seen by reporters returning to the White House on Thursday evening and did not appear ill. He is 74 years old and clinically obese, putting him at higher risk of serious complications from a virus that has infected more than 7 million people nationwide.

The president’s physician said in a memo that Trump and the first lady, who is 50, “are both well at this time” and “plan to remain at home within the White House during their convalescence.” Their son Barron, who lives at the White House, tested negative.

Trump has been trying all year to convince the American public that the worst of the pandemic is behind them. In the best of cases, if he develops no symptoms, which can include fever, cough and breathing trouble, it will likely force him off the campaign trail just weeks before the election and puts his participation in the second presidential debate, scheduled for Oct. 15 in Miami, into doubt.

Trump’s handling of the pandemic has already been a major flashpoint in his race against Democrat Joe Biden, who spent much of the summer off the campaign trail and at his home in Delaware citing concern about the virus. Biden has since resumed a more active campaign schedule, but with small, socially distanced crowds.

World leaders offered the president and first family their best wishes after their diagnosis, as governments used their case as a reminder for their citizens to wear masks and practice social distancing measures.

Multiple White House staffers have previously tested positive for the virus, including Pence’s press secretary, Katie Miller, national security adviser Robert O’Brien and one of the president’s personal valets. An RNC official confirmed Friday that Chairwoman Ronna McDaniel learned she had tested positive Wednesday afternoon. She has been at her home in Michigan since last Saturday and did not attend the debate.

Trump is far from the first world leader to test positive for the virus, which previously infected Brazilian President Jair Bolsonaro and British Prime Minister Boris Johnson, who spent a week in the hospital, including three nights in intensive care. Former Italian Prime Minister Silvio Berlusconi was hospitalized last month while fighting what he called a “hellish” case of COVID-19.

Ruth Handley speaks at the dedication and renaming ceremony at the Highlands County Children’s Advocacy Center, which was renamed in her honor.

Part of the gathering for the dedication and renaming ceremony Friday morning at The Ruth E. Handley Children’s Advocacy Center of Highlands County.

SEBRING — Community leaders, friends and family gathered Friday morning at the Children’s Advocacy Center for the dedication and re-naming of the facility in honor of Ruth E. Handley a lifetime advocate of children’s issues.

Handley, who was a teacher for many years, served as the Superintendent of Schools in Highlands County from 1986 to 1994.

While serving as superintendent, Handley became an active member of the Children’s Services Council and identified a need for a safe place to address victims of child abuse and neglect, which led to the establishment of the Children’s Advocacy Center.

Champion for Children Founder and Chairman of the Board Kevin Roberts said Handley is a tremendous champion for children and dynamic child advocate.

He noted that Handley, along with Doris Gentry Hawthorne, were the honorees of the first Champion for Children Award in 2000.

Handley’s daughter, Mary Anne Handley, provided a brief summary of her mother’s life including career accomplishments and dedication to helping children. She noted that her mother was the first elected superintendent in the State of Florida.

Jeff Roth, who was the Children’s Services Council executive director/manager 2000-2015, said few people have impacted his life more than Handley.

“I have been a better person in life because I have known you,” he said to Handley.

Luzed Cruz, Children’s Services Council executive director/manager 2017-2020, said on her second day on the job at the center Handley spoke to her for about two to three hours about the history of the facility.

Cruz said the Children’s Advocacy Center is a gem for this community, and after learning from Handley about the development of the center, it was her goal to make the Foundation proud.

After the unveiling of the sign on the side of the center with her name on it, Handley thanked everyone for coming to the dedication.

“I am overwhelmed by all of these comments,” she said.

Handley also expressed her appreciation for the role the Foundation has had and all the donors and child advocates in the community in their efforts to establish the Children’s Advocacy Center.

In December 2019 the Board of County Commission voted to rename Highlands County’s Children’s Advocacy Center for Handley.

The Advocacy Center provides a child-friendly facility, where victims of abuse can come and feel safe, while all agencies involving themselves in the case are available, on site, to meet the needs of the child.

The Children’s Advocacy Center in Highlands County has been accredited since 1998 and received its most recent accreditation from the National Children’s Alliance in June 2018.

The Center is on the Sebring Parkway at its intersection with South Commerce Avenue.

Hundreds of boats idle through downtown on the St. Johns River during a rally Sunday, June 14 in Jacksonville celebrating President Donald Trump’s birthday.

Some news reports suggested this situation would derail the president’s campaign, as all but one virtual event scheduled for Friday were canceled.

“We have a plan,” Kathy Rapp, chair of the Republican Party of Highlands County. “We’ll stick to the plan.”

She said of the volunteers that “everybody has their own jobs to do” and that things will continue as they are.

Neal Golden, chair of the Democratic Party of Highlands County, also said their campaign would remain the same, barring any changes put forth by the national and state party leaders.

“We are concerned about the health of our president and first lady,” Golden said.

He expects that they are getting the best care available and should come out of quarantine in 14 days.

“And everything will be OK,” Golden said.

At 8:45 a.m. Friday, Democratic nominee Joe Biden tweeted that he and his wife, Jill, sent thoughts to Trump and the First Lady for a swift recovery.

“We will continue to pray for the health and safety of the president and his family,” Biden tweeted.

At 12:22 p.m., Biden reported he and his wife had tested negative for the virus.

“Thank you to everyone for your messages of concern,” Biden tweeted. “I hope this serves as a reminder: wear a mask, keep social distance, and wash your hands.”

Golden also said hearing that Biden tested negative for the virus was good news, as it was also good to hear Pence tested negative, to stand in for the president if needed.

CNN.com published a timeline for Trump’s activities prior to the news that Hicks tested positive. At 10:20 p.m. ET on Thursday, Trump departed Duluth, Minnesota, on Air Force One after hosting a campaign rally. Hicks, along for the trip, began showing symptoms and isolated herself in a separate cabin.

Reporters saw her deplaning from the rear steps.

Trump originally intended to continue his schedule for Friday, including a fundraiser in New Jersey.

Trump understated the seriousness of the coronavirus outbreak in its early stages and has repeatedly predicted it would go away. He has rarely worn a mask in public and regularly mocks others for wearing them so often.

The Johns Hopkins University of Medicine Coronavirus Resource Center reported Friday afternoon that the virus had infected 7,299,080 people in the United States, killing a total of 208,191.

SEBRING — After five days of 10 or fewer new cases, Highlands County had 20 new COVID-19 cases in the Friday update from the Florida Department of Health and one more death for a total of 91 who have passed over the course of the pandemic.

Highlands now has a total of 2,206 virus cases. Currently 22 are hospitalized in the county due to the coronavirus.

Dixie County had two days with no new cases and Lafayette County has gone eight 8 days without a new case.

Liberty County had no new cases in the Friday update.

Dade County had a previous day positivity rate of 5.11%.

There has been an increase of 470 cases involving people ages 15 to 24 from the Thursday count, the largest increase in any age group.

There have been 5,935 deaths of residents and staff members of long-term care facilities, which is an increase of 47 from the Thursday count.

Currently 2,056 people are hospitalized with primary diagnoses of COVID-19, the respiratory illness caused by the coronavirus. That is a decrease of 25 from the Thursday count. 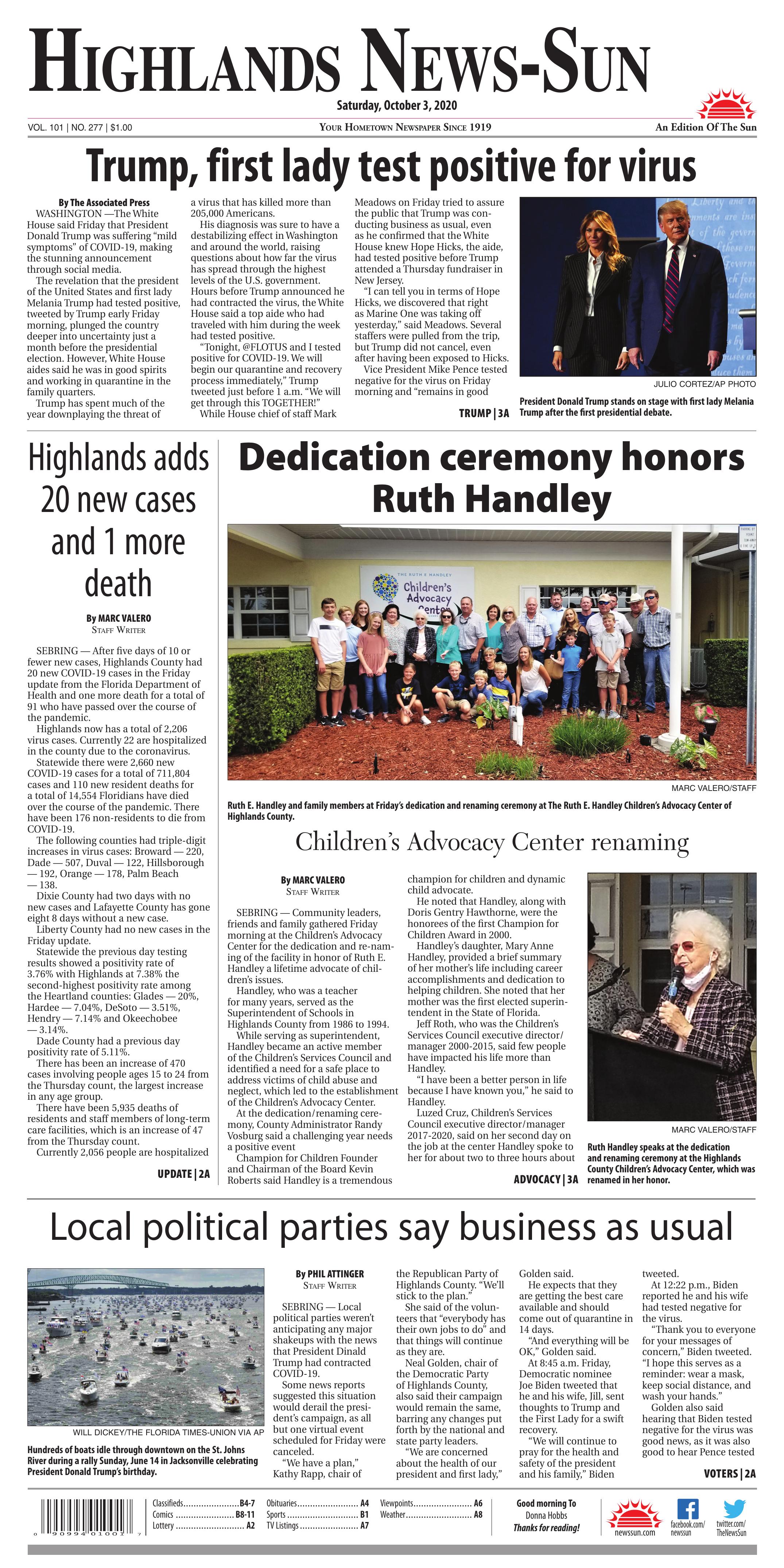