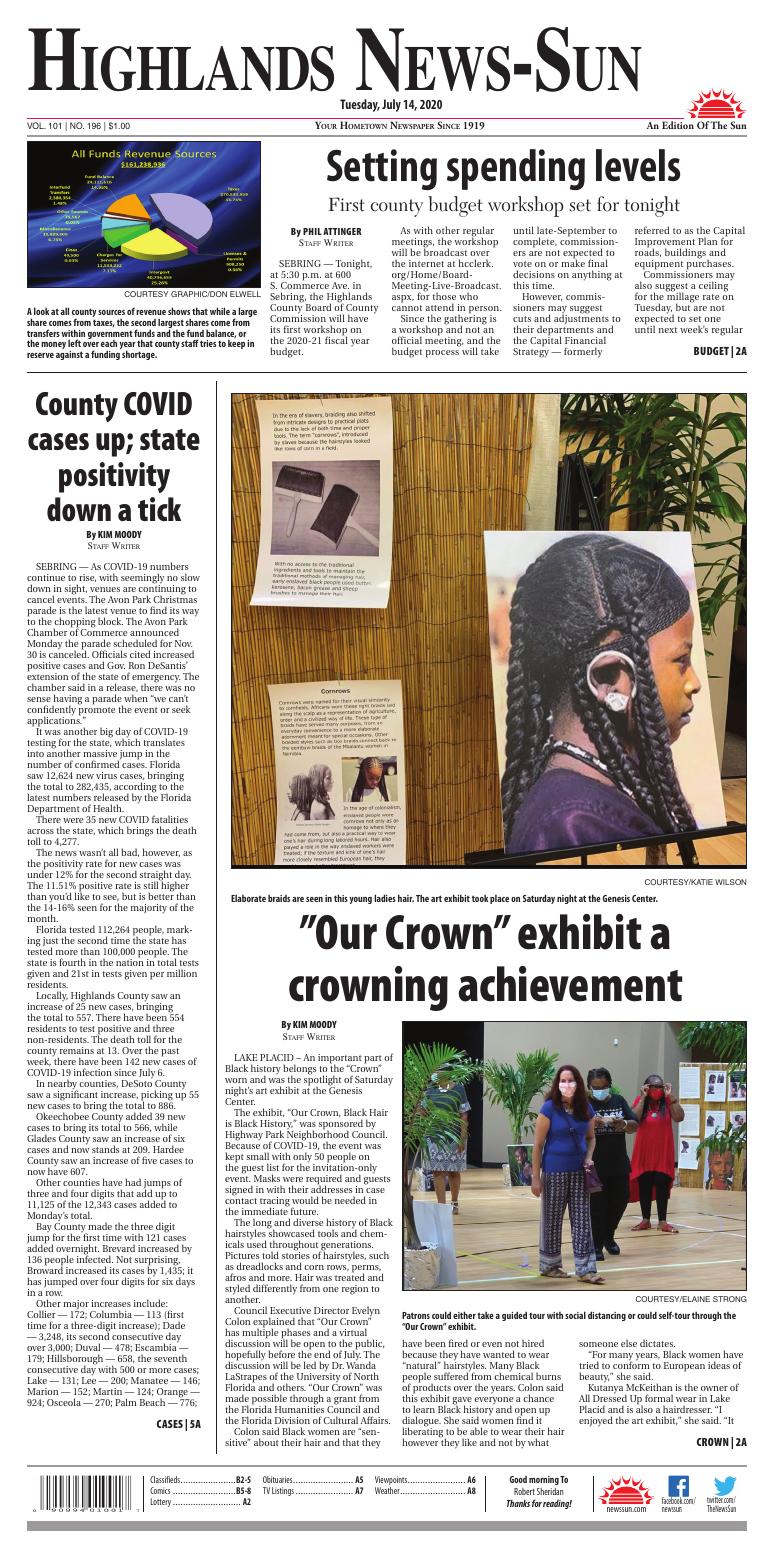 A look at all county sources of revenue shows that while a large share comes from taxes, the second largest shares come from transfers within government funds and the fund balance, or the money left over each year that county staff tries to keep in reserve against a funding shortage.

Revenue for the General Fund, which is the part the Board of County Commission oversees, comes mostly from property taxes, although intergovernmental transfers, charges for service and the fund balance are the next largest sources, in that order.

SEBRING — Tonight, at 5:30 p.m. at 600 S. Commerce Ave. in Sebring, the Highlands County Board of County Commission will have its first workshop on the 2020-21 fiscal year budget.

As with other regular meetings, the workshop will be broadcast over the internet at hcclerk.org/Home/Board-Meeting-Live-Broadcast.aspx, for those who cannot attend in person.

Since the gathering is a workshop and not an official meeting, and the budget process will take until late-September to complete, commissioners are not expected to vote on or make final decisions on anything at this time.

However, commissioners may suggest cuts and adjustments to their departments and the Capital Financial Strategy — formerly referred to as the Capital Improvement Plan for roads, buildings and equipment purchases.

Commissioners may also suggest a ceiling for the millage rate on Tuesday, but are not expected to set one until next week’s regular meeting, at the earliest.

They may set it at 9.25, as they did at the start of the budget process last year, just to have room to adjust budgets if they can’t make cuts, said David Nitz, manager of the Office of Management and Budget.

However, Nitz said the recommended budget has an 8.55 millage rate — the same as the current rate, the rate that commissioners ultimately chose for the budget last year.

“We don’t anticipate it will go higher,” Nitz said Monday. “We would love to go lower [but] this may not be the year that will occur.”

As it stands, Highlands County government departments and agencies go into this coming fiscal year with reduced funding thanks to more than two months of shutdown for COVID-19, during what would have been the most lucrative season of the year for tourism, gasoline consumption and consumer purchases — and the taxes paid on them.

Fortunately, the county has reserves and will see a slight increase in property tax revenue from improved property values.

Estimates are that property taxes will go up 3.25%, based on taxable values tallied by the Highlands County Property Appraiser.

However, the county’s Office of Management and Budget (OMB) has recommended holding budget increases to 2% in hopes of restoring the county’s general fund balance to more than a month and a half of operating expenses.

Most of the $161.2 million is already spoken for, given that revenue from certain taxes can only be used for certain purposes, many of them not having to do with personnel or operations.

The board cannot lump all revenues together in the general fund. Budget requests from general fund departments and constitutional offices total $74.1 million.

To cover those requests without cuts, Nitz said, would require a property tax rate increase of 0.132, which would bring the 8.55 millage rate up to 8.682, at least.

Elaborate braids are seen in this young ladies hair. The art exhibit took place on Saturday night at the Genesis Center.

Patrons could either take a guided tour with social distancing or could self-tour through the “Our Crown” exhibit.

High school graduates Alkeivion Hester and Emarryah Wilson were given gifts at the “Our Crown” event on Saturday night.

These young people volunteered at the “Our Crown” exhibit at the Genesis Center on Saturday.

LAKE PLACID – An important part of Black history belongs to the “Crown” worn and was the spotlight of Saturday night’s art exhibit at the Genesis Center.

The exhibit, “Our Crown, Black Hair is Black History,” was sponsored by Highway Park Neighborhood Council. Because of COVID-19, the event was kept small with only 50 people on the guest list for the invitation-only event. Masks were required and guests signed in with their addresses in case contact tracing would be needed in the immediate future.

The long and diverse history of Black hairstyles showcased tools and chemicals used throughout generations. Pictures told stories of hairstyles, such as dreadlocks and corn rows, perms, afros and more. Hair was treated and styled differently from one region to another.

Council Executive Director Evelyn Colon explained that “Our Crown” has multiple phases and a virtual discussion will be open to the public, hopefully before the end of July. The discussion will be led by Dr. Wanda LaStrapes of the University of North Florida and others. “Our Crown” was made possible through a grant from the Florida Humanities Council and the Florida Division of Cultural Affairs.

Colon said Black women are “sensitive” about their hair and that they have been fired or even not hired because they have wanted to wear “natural” hairstyles. Many Black people suffered from chemical burns of products over the years. Colon said this exhibit gave everyone a chance to learn Black history and open up dialogue. She said women find it liberating to be able to wear their hair however they like and not by what someone else dictates.

“For many years, Black women have tried to conform to European ideas of beauty,” she said.

Kutanya McKeithan is the owner of All Dressed Up formal wear in Lake Placid and is also a hairdresser. “I enjoyed the art exhibit,” she said. “It was interesting to see the hairstyles from different regions in Africa. The food was good and the entertainment told a story.”

Al-Khidr Portee of ASP Beauty Supplies in Lake Placid supplied many of the products and tools in the exhibit. The exhibit was curated by Janice Allen, MBA.

Ontarial Clark catered the event. The entertainment was kicked off by Rusty Trumpet. The Tam Tam Congo brought the sights and sounds of, well, the Congo. The Tam Tam can often be seen performed at Disney’s Animal Kingdom. The ENZ Stilt Dancers defied gravity while performing seemingly impossible moves while balancing on stilts. The colorful giants did not take no for an answer and got patrons up and dancing. Politicians, teenagers and neighbors joined in the fun.

Two Sebring High School students were honored, Alkeivion Hester and Emarryah Wilson. Wilson was given a $1,000 scholarship from the HPNC.

“What an event,” Colon said. “In spite of the masks, it was a fantastic event.”

A closer look at the number of positive coronavirus cases in Highlands County as of Monday’s report.

SEBRING — As COVID-19 numbers continue to rise, with seemingly no slow down in sight, venues are continuing to cancel events. The Avon Park Christmas parade is the latest venue to find its way to the chopping block. The Avon Park Chamber of Commerce announced Monday the parade scheduled for Nov. 30 is canceled. Officials cited increased positive cases and Gov. Ron DeSantis’ extension of the state of emergency. The chamber said in a release, there was no sense having a parade when “we can’t confidently promote the event or seek applications.”

It was another big day of COVID-19 testing for the state, which translates into another massive jump in the number of confirmed cases. Florida saw 12,624 new virus cases, bringing the total to 282,435, according to the latest numbers released by the Florida Department of Health.

There were 35 new COVID fatalities across the state, which brings the death toll to 4,277.

The news wasn’t all bad, however, as the positivity rate for new cases was under 12% for the second straight day. The 11.51% positive rate is still higher than you’d like to see, but is better than the 14-16% seen for the majority of the month.

Florida tested 112,264 people, marking just the second time the state has tested more than 100,000 people. The state is fourth in the nation in total tests given and 21st in tests given per million residents.

Locally, Highlands County saw an increase of 25 new cases, bringing the total to 557. There have been 554 residents to test positive and three non-residents. The death toll for the county remains at 13. Over the past week, there have been 142 new cases of COVID-19 infection since July 6.

In nearby counties, DeSoto County saw a significant increase, picking up 55 new cases to bring the total to 886.

Other counties have had jumps of three and four digits that add up to 11,125 of the 12,343 cases added to Monday’s total.

Bay County made the three digit jump for the first time with 121 cases added overnight. Brevard increased by 136 people infected. Not surprising, Broward increased its cases by 1,435; it has jumped over four digits for six days in a row.

The Agency for Health Care Administration bed census reported on Monday there was 22 adult intensive care unit bed census on Monday. The report shows there was only two beds available or 7.69%. Countywide there were 13 residents infected at long-term care facilities and 34 staff members, according to AHCA’s Monday report. 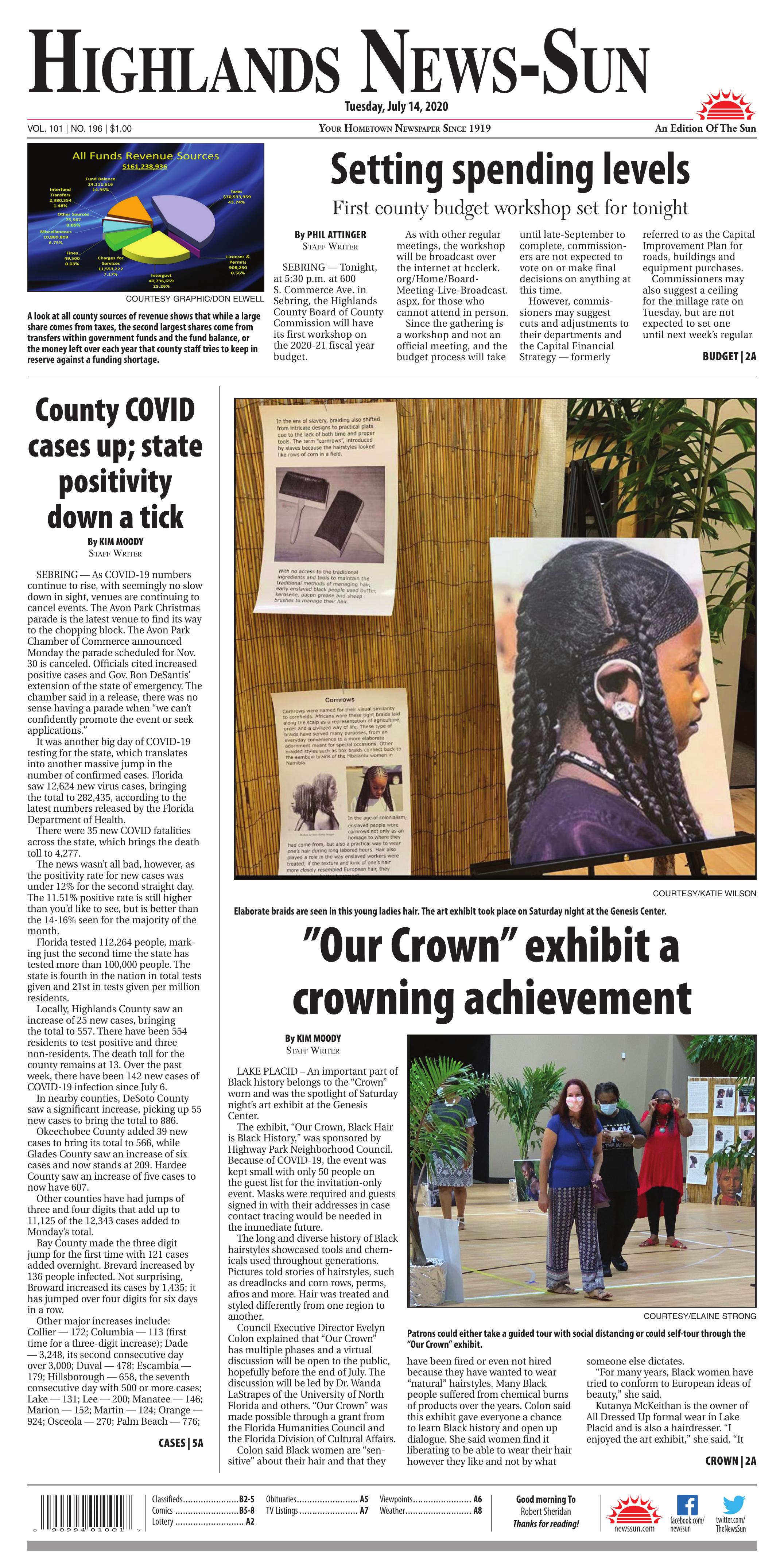