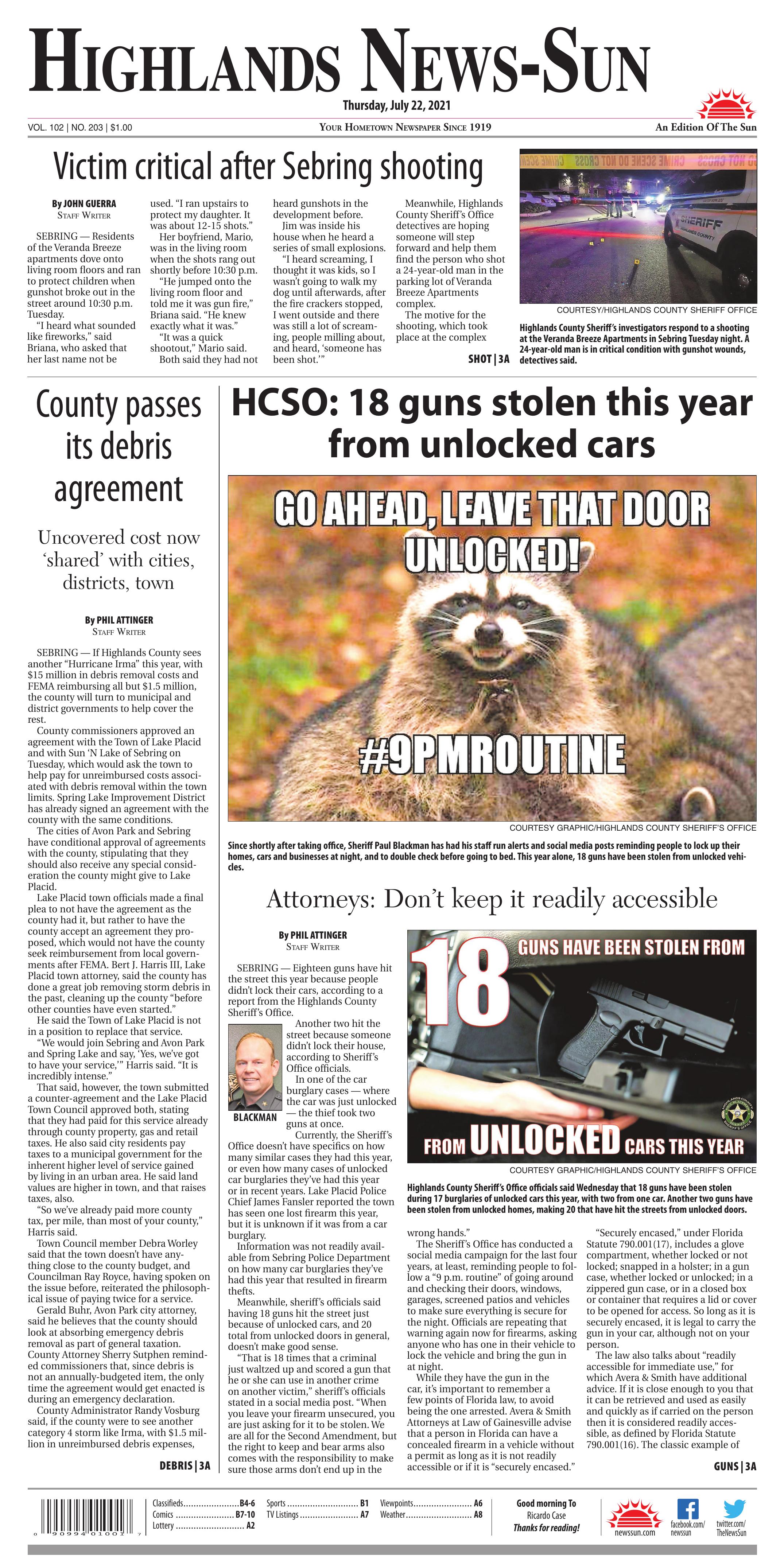 Highlands County Sheriff’s investigators respond to a shooting at the Veranda Breeze Apartments in Sebring Tuesday night. A 24-year-old man is in critical condition with gunshot wounds, detectives said.

SEBRING — Residents of the Veranda Breeze apartments dove onto living room floors and ran to protect children when gunshot broke out in the street around 10:30 p.m. Tuesday.

“I heard what sounded like fireworks,” said Briana, who asked that her last name not be used. “I ran upstairs to protect my daughter. It was about 12-15 shots.”

Her boyfriend, Mario, was in the living room when the shots rang out shortly before 10:30 p.m.

“He jumped onto the living room floor and told me it was gun fire,” Briana said. “He knew exactly what it was.”

“It was a quick shootout,” Mario said.

Both said they had not heard gunshots in the development before.

Jim was inside his house when he heard a series of small explosions.

“I heard screaming, I thought it was kids, so I wasn’t going to walk my dog until afterwards, after the fire crackers stopped, I went outside and there was still a lot of screaming, people milling about, and heard, ‘someone has been shot.’”

Meanwhile, Highlands County Sheriff’s Office detectives are hoping someone will step forward and help them find the person who shot a 24-year-old man in the parking lot of Veranda Breeze Apartments complex.

The motive for the shooting, which took place at the complex around 9:50 p.m. Tuesday, is still unclear, the sheriff’s spokesman said.

“The shooting does not appear to be random based on the preliminary investigation,” officials said.

The shooting, which took place off Youth Care Lane in Sebring, left the victim in critical condition. He was flown to an area trauma center Tuesday night. To protect victims from further harm, the department will not reveal which hospital.

“He’s a male victim, he’s still alive, but in critical condition,” officials said the morning after the shooting.

An executive with the Orlando company that manages the Veranda Breeze Apartments was on the property Wednesday morning.

“I talked to the investigator this morning. They won’t even give me a name, we don’t know if he lives here, we don’t know anything,” Elizabeth Vermales said. The apartment manager called Vermales in Orlando immediately after the shooting.

“We are cooperating fully with the Sheriff’s Office and passing along any information we find,” she said.

Anyone with information is asked to call 863-402-7200. Anonymous tips can be left via the HCSO app or with Heartland Crime Stoppers at 1-800-226-TIPS or www.heartlandcrimestoppers.com.

Since shortly after taking office, Sheriff Paul Blackman has had his staff run alerts and social media posts reminding people to lock up their homes, cars and businesses at night, and to double check before going to bed. This year alone, 18 guns have been stolen from unlocked vehicles.

SEBRING — Eighteen guns have hit the street this year because people didn’t lock their cars, according to a report from the Highlands County Sheriff’s Office.

Another two hit the street because someone didn’t lock their house, according to Sheriff’s Office officials.

In one of the car burglary cases — where the car was just unlocked — the thief took two guns at once.

Currently, the Sheriff’s Office doesn’t have specifics on how many similar cases they had this year, or even how many cases of unlocked car burglaries they’ve had this year or in recent years. Lake Placid Police Chief James Fansler reported the town has seen one lost firearm this year, but it is unknown if it was from a car burglary.

Information was not readily available from Sebring Police Department on how many car burglaries they’ve had this year that resulted in firearm thefts.

“That is 18 times that a criminal just waltzed up and scored a gun that he or she can use in another crime on another victim,” sheriff’s officials stated in a social media post. “When you leave your firearm unsecured, you are just asking for it to be stolen. We are all for the Second Amendment, but the right to keep and bear arms also comes with the responsibility to make sure those arms don’t end up in the wrong hands.”

The Sheriff’s Office has conducted a social media campaign for the last four years, at least, reminding people to follow a “9 p.m. routine” of going around and checking their doors, windows, garages, screened patios and vehicles to make sure everything is secure for the night. Officials are repeating that warning again now for firearms, asking anyone who has one in their vehicle to lock the vehicle and bring the gun in at night.

While they have the gun in the car, it’s important to remember a few points of Florida law, to avoid being the one arrested. Avera & Smith Attorneys at Law of Gainesville advise that a person in Florida can have a concealed firearm in a vehicle without a permit as long as it is not readily accessible or if it is “securely encased.”

“Securely encased,” under Florida Statute 790.001(17), includes a glove compartment, whether locked or not locked; snapped in a holster; in a gun case, whether locked or unlocked; in a zippered gun case, or in a closed box or container that requires a lid or cover to be opened for access. So long as it is securely encased, it is legal to carry the gun in your car, although not on your person.

The law also talks about “readily accessible for immediate use,” for which Avera & Smith have additional advice. If it is close enough to you that it can be retrieved and used as easily and quickly as if carried on the person then it is considered readily accessible, as defined by Florida Statute 790.001(16). The classic example of readily accessible is when the gun is under the seat you are sitting in.

In answer to whether or not it is worth the risk to push the boundaries, such as having a gun under the seat in a holster, the attorneys’ opinion is “absolutely not.” If the holster comes loose or unbuttoned, that gun owner could face a trip to jail, a felony charge, and never getting to own a gun again, if convicted.

There are thousands of case decisions on this issue where someone got arrested, convicted and appealed the conviction, but Avera & Smith advise: “Don’t be that person. Even if you are correct it could take years and thousands of dollars to resolve your case.”

They also say that each person should consider whether or not a law enforcement officer would let them leave with a loaded weapon that might be readily accessible or not closed up in a case or holster.

“Keep the gun secure and out of your reach,” Avera & Smith advise. “Alternatively, take the time to get the permit; you will learn something new about firearm safety and won’t have to hire a lawyer to argue your case.”

SEBRING — If Highlands County sees another “Hurricane Irma” this year, with $15 million in debris removal costs and FEMA reimbursing all but $1.5 million, the county will turn to municipal and district governments to help cover the rest.

The cities of Avon Park and Sebring have conditional approval of agreements with the county, stipulating that they should also receive any special consideration the county might give to Lake Placid.

He said the Town of Lake Placid is not in a position to replace that service.

“We would join Sebring and Avon Park and Spring Lake and say, ‘Yes, we’ve got to have your service,’” Harris said. “It is incredibly intense.”

That said, however, the town submitted a counter-agreement and the Lake Placid Town Council approved both, stating that they had paid for this service already through county property, gas and retail taxes. He also said city residents pay taxes to a municipal government for the inherent higher level of service gained by living in an urban area. He said land values are higher in town, and that raises taxes, also.

“So we’ve already paid more county tax, per mile, than most of your county,” Harris said.

Town Council member Debra Worley said that the town doesn’t have anything close to the county budget, and Councilman Ray Royce, having spoken on the issue before, reiterated the philosophical issue of paying twice for a service.

Gerald Buhr, Avon Park city attorney, said he believes that the county should look at absorbing emergency debris removal as part of general taxation. County Attorney Sherry Sutphen reminded commissioners that, since debris is not an annually-budgeted item, the only time the agreement would get enacted is during an emergency declaration.

County Administrator Randy Vosburg said, if the county were to see another category 4 storm like Irma, with $1.5 million in unreimbursed debris expenses, Lake Placid’s share would likely be no more than $75,000-$150,000, or less depending on how much debris a storm creates in a given area.

One concession added to the agreement, Vosburg said, is to have cities and districts pay after the FEMA reimbursement process, which could take two or three years, and gives time to prepare for that expense.

Commissioner Kevin Roberts said he would look forward to the county and other local governments working in collaboration, “with the understanding of [us] all coming to the plate because we have some skin [the game].”