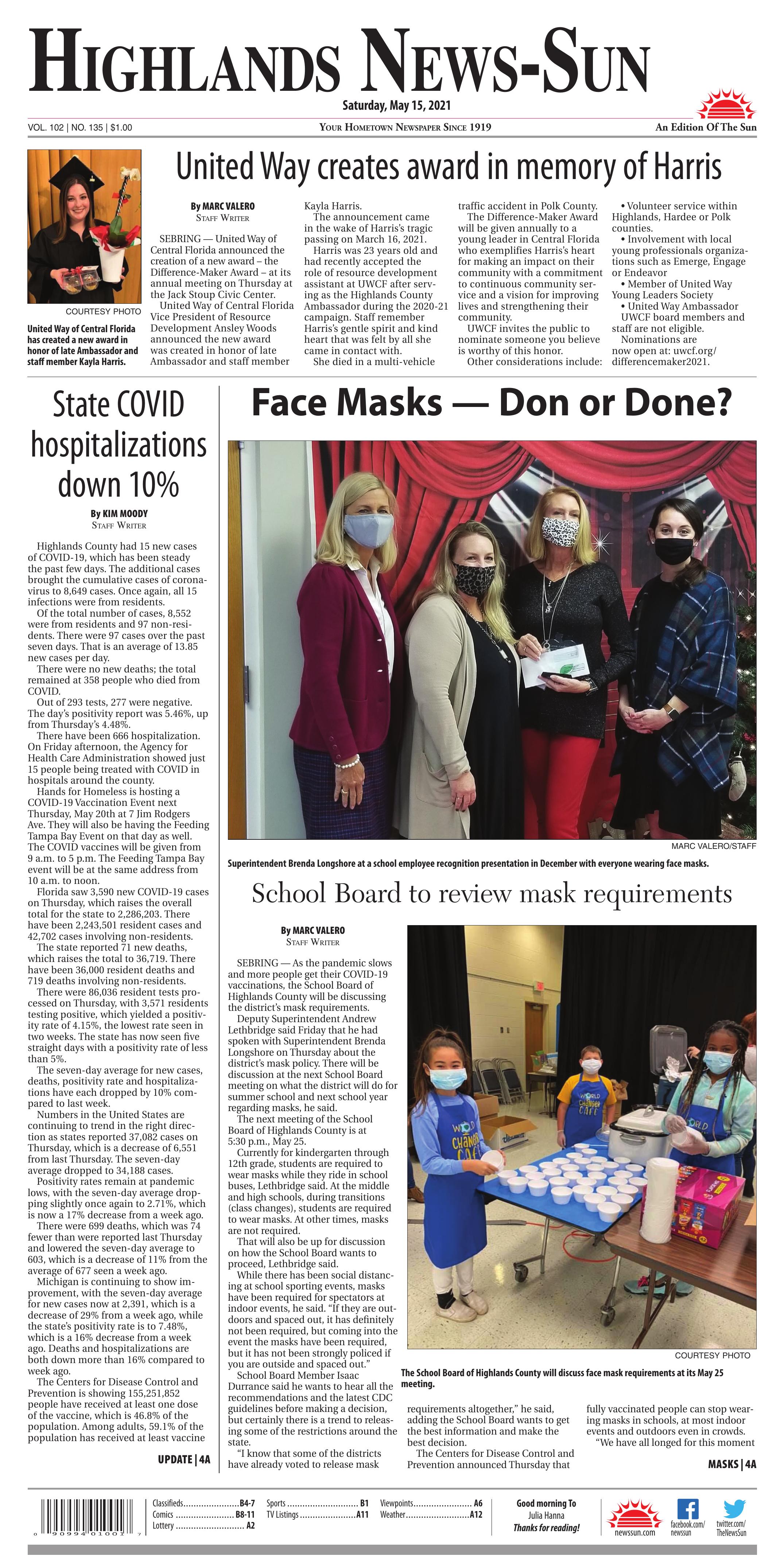 United Way of Central Florida has created a new award in honor of late Ambassador and staff member Kayla Harris.

SEBRING — United Way of Central Florida announced the creation of a new award – the Difference-Maker Award – at its annual meeting on Thursday at the Jack Stoup Civic Center.

The announcement came in the wake of Harris’s tragic passing on March 16, 2021.

Harris was 23 years old and had recently accepted the role of resource development assistant at UWCF after serving as the Highlands County Ambassador during the 2020-21 campaign. Staff remember Harris’s gentle spirit and kind heart that was felt by all she came in contact with.

She died in a multi-vehicle traffic accident in Polk County.

The Difference-Maker Award will be given annually to a young leader in Central Florida who exemplifies Harris’s heart for making an impact on their community with a commitment to continuous community service and a vision for improving lives and strengthening their community.

UWCF invites the public to nominate someone you believe is worthy of this honor.

• Involvement with local young professionals organizations such as Emerge, Engage or Endeavor

UWCF board members and staff are not eligible.

Nominations are now open at: uwcf.org/differencemaker2021.

The School Board of Highlands County will discuss face mask requirements at its May 25 meeting.

Superintendent Brenda Longshore at a school employee recognition presentation in December with everyone wearing face masks.

SEBRING — As the pandemic slows and more people get their COVID-19 vaccinations, the School Board of Highlands County will be discussing the district’s mask requirements.

Deputy Superintendent Andrew Lethbridge said Friday that he had spoken with Superintendent Brenda Longshore on Thursday about the district’s mask policy. There will be discussion at the next School Board meeting on what the district will do for summer school and next school year regarding masks, he said.

That will also be up for discussion on how the School Board wants to proceed, Lethbridge said.

School Board Member Isaac Durrance said he wants to hear all the recommendations and the latest CDC guidelines before making a decision, but certainly there is a trend to releasing some of the restrictions around the state.

“I know that some of the districts have already voted to release mask requirements altogether,” he said, adding the School Board wants to get the best information and make the best decision.

The Centers for Disease Control and Prevention announced Thursday that fully vaccinated people can stop wearing masks in schools, at most indoor events and outdoors even in crowds.

“We have all longed for this moment — when we can get back to some sense of normalcy,” said Dr. Rochelle Walensky, CDC director.

In Hillsborough County, school officials said Thursday that the district’s face mask policies are staying in place for now. In a letter to parents, the district said CDC guidance doesn’t “supersede local rules for businesses and workplaces, including schools.” Face mask requirements will be discussed at its May 18 school board meeting.

In Palm Beach County, declining coronavirus infection rates and rising numbers of vaccinations have convinced Superintendent Donald Fennoy that face masks for students can be optional when schools start Aug. 10.

Students will still have to wear masks the rest of this school year, at graduations and during summer school. There’s also no immediate change for employees.

In Polk County, School Board members voted to decide whether to end the district’s mask mandate at their June 8 meeting so new Superintendent Frederick Heid can participate in the discussion and to get the district through its high school graduations.

At his Tuesday press conference in Jacksonville to announce the signing of the school choice bill, Gov. DeSantis commented about school district face mask mandates.

“These kids do not need to be wearing these masks, OK? I’m sorry, they don’t,” DeSantis said. “We need to be able to let them be kids and let them act normally. And that’s what should be the case in the fall throughout the school year.”

Highlands County had 15 new cases of COVID-19, which has been steady the past few days. The additional cases brought the cumulative cases of coronavirus to 8,649 cases. Once again, all 15 infections were from residents.

Of the total number of cases, 8,552 were from residents and 97 non-residents. There were 97 cases over the past seven days. That is an average of 13.85 new cases per day.

There were no new deaths; the total remained at 358 people who died from COVID.

There have been 666 hospitalization. On Friday afternoon, the Agency for Health Care Administration showed just 15 people being treated with COVID in hospitals around the county.

Hands for Homeless is hosting a COVID-19 Vaccination Event next Thursday, May 20th at 7 Jim Rodgers Ave. They will also be having the Feeding Tampa Bay Event on that day as well. The COVID vaccines will be given from 9 a.m. to 5 p.m. The Feeding Tampa Bay event will be at the same address from 10 a.m. to noon.

The state reported 71 new deaths, which raises the total to 36,719. There have been 36,000 resident deaths and 719 deaths involving non-residents.

The seven-day average for new cases, deaths, positivity rate and hospitalizations have each dropped by 10% compared to last week.

Numbers in the United States are continuing to trend in the right direction as states reported 37,082 cases on Thursday, which is a decrease of 6,551 from last Thursday. The seven-day average dropped to 34,188 cases.

Positivity rates remain at pandemic lows, with the seven-day average dropping slightly once again to 2.71%, which is now a 17% decrease from a week ago.

There were 699 deaths, which was 74 fewer than were reported last Thursday and lowered the seven-day average to 603, which is a decrease of 11% from the average of 677 seen a week ago.

Michigan is continuing to show improvement, with the seven-day average for new cases now at 2,391, which is a decrease of 29% from a week ago, while the state’s positivity rate is to 7.48%, which is a 16% decrease from a week ago. Deaths and hospitalizations are both down more than 16% compared to week ago.

States have administered 78.5% of the vaccines they have been given.

According to the Johns Hopkins University Center for Systems Science and Engineering, the U.S. has seen 32.88 million cases and had 584,510 deaths.

Globally, there have been 161.3 million cases and 3.34 million deaths.