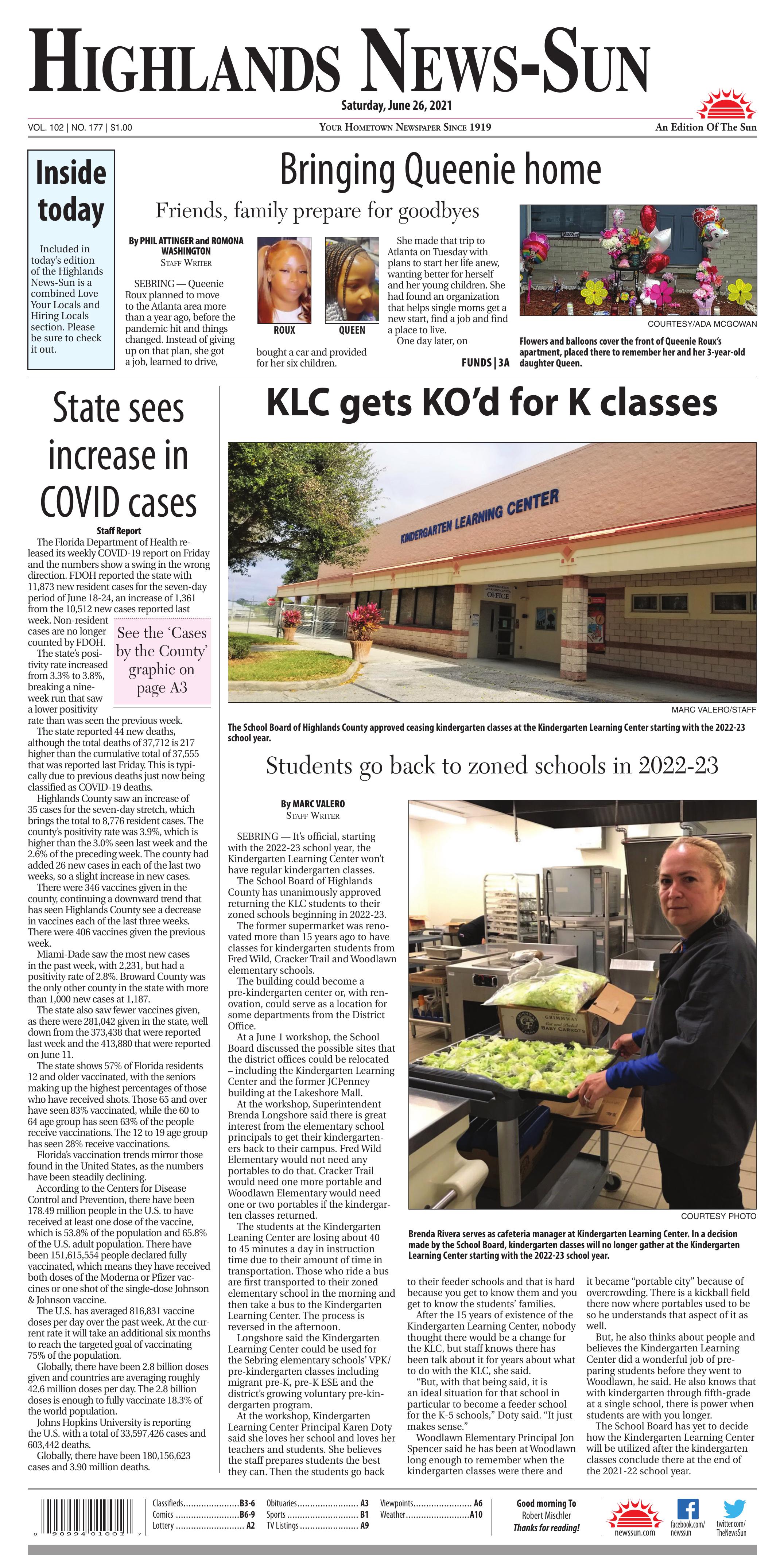 Flowers and balloons cover the front of Queenie Roux’s apartment, placed there to remember her and her 3-year-old daughter Queen.

From left: Ada McGowan, president and CEO of Highlands County Citizens With Voices, making one of the first deposits into the account set up by John Shoop, president of First Southern Bank, for Robbin Smith. The fund will be used to pay for the funeral expenses of Queenie Roux and her 3-year-old daughter Queen who were both killed in an auto crash Wednesday in Atlanta.

SEBRING — Queenie Roux planned to move to the Atlanta area more than a year ago, before the pandemic hit and things changed. Instead of giving up on that plan, she got a job, learned to drive, bought a car and provided for her six children.

She made that trip to Atlanta on Tuesday with plans to start her life anew, wanting better for herself and her young children. She had found an organization that helps single moms get a new start, find a job and find a place to live.

One day later, on Wednesday, Queenie and her 3-year-old daughter Queen, named after her, were killed in an automobile crash in Atlanta.

Her family back here in Sebring have brought the surviving children home and are now sadly planning the final arrangements for the expectant mother and one of her daughters.

Family and friends will gather at 6:30 p.m. today at Citrus Terrace Apartments for a pink and yellow balloon release in memory of Queenie and Queen. An account has been set up in the name of Robbin Smith and Louise Roux at First Southern Bank on Center Avenue to help cover medical and funeral expenses.

Robbin Smith, Queenie’s aunt, said Queenie and her brother were raised by Robbin’s mother, with their father not too far away here in Sebring.

“She went to school until the 12th grade but she wanted to explore the world,” Smith said of her niece, who she described as feisty. “She got into a lot of little issues, but she really grew up this past year during the pandemic. Her kids were her life; she always kept them up.”

Smith said Queenie made it to Atlanta Tuesday night at which time she made a video posted on social media.

Smith said no one knows what she was doing Wednesday at the time of the accident. She believes she may have been going to the facility that was the catalyst for making the move.

“She wanted more for her children and for herself. She wanted a fresh start. She had matured so much in the past year. She had her own place here and her job. I thought she had forgotten about Atlanta, but instead she had been steadily working toward the goal of moving there,” she said.

Smith said their names fit them well. “Queenie was a queen. She liked to dress nice. She stepped out correct and was very fashionable. Little Queen was going to be just like her,” she said.

Meanwhile, investigators with the Clayton County Police Department in Georgia are still trying to determine how two sedans, a Toyota and a Nissan, ended up in a fatal wreck on Wednesday. The crash took place at 12:23 p.m., Clayton Police officials said, on Interstate 75 northbound at Forest Parkway, Exit 237.

Of the six people in Queenie’s car, Clayton Police said, four were ejected in the collision, including Queen.

Police said the scene was approximately 500 feet before entering a construction zone where crews are rebuilding and repaving an exit ramp, but not in the construction zone itself. The accident investigation had I-75 shut down for three hours at a point just 10 miles from the center of the city.

The School Board of Highlands County approved ceasing kindergarten classes at the Kindergarten Learning Center starting with the 2022-23 school year.

The School Board of Highlands County has unanimously approved returning the KLC students to their zoned schools beginning in 2022-23.

The former supermarket was renovated more than 15 years ago to have classes for kindergarten students from Fred Wild, Cracker Trail and Woodlawn elementary schools.

The building could become a pre-kindergarten center or, with renovation, could serve as a location for some departments from the District Office.

At a June 1 workshop, the School Board discussed the possible sites that the district offices could be relocated – including the Kindergarten Learning Center and the former JCPenney building at the Lakeshore Mall.

The students at the Kindergarten Leaning Center are losing about 40 to 45 minutes a day in instruction time due to their amount of time in transportation. Those who ride a bus are first transported to their zoned elementary school in the morning and then take a bus to the Kindergarten Learning Center. The process is reversed in the afternoon.

After the 15 years of existence of the Kindergarten Learning Center, nobody thought there would be a change for the KLC, but staff knows there has been talk about it for years about what to do with the KLC, she said.

“But, with that being said, it is an ideal situation for that school in particular to become a feeder school for the K-5 schools,” Doty said. “It just makes sense.”

Woodlawn Elementary Principal Jon Spencer said he has been at Woodlawn long enough to remember when the kindergarten classes were there and it became “portable city” because of overcrowding. There is a kickball field there now where portables used to be so he understands that aspect of it as well.

But, he also thinks about people and believes the Kindergarten Learning Center did a wonderful job of preparing students before they went to Woodlawn, he said. He also knows that with kindergarten through fifth-grade at a single school, there is power when students are with you longer.

The School Board has yet to decide how the Kindergarten Learning Center will be utilized after the kindergarten classes conclude there at the end of the 2021-22 school year.

The Florida Department of Health released its weekly COVID-19 report on Friday and the numbers show a swing in the wrong direction. FDOH reported the state with 11,873 new resident cases for the seven-day period of June 18-24, an increase of 1,361 from the 10,512 new cases reported last week. Non-resident cases are no longer counted by FDOH.

The state reported 44 new deaths, although the total deaths of 37,712 is 217 higher than the cumulative total of 37,555 that was reported last Friday. This is typically due to previous deaths just now being classified as COVID-19 deaths.

Highlands County saw an increase of 35 cases for the seven-day stretch, which brings the total to 8,776 resident cases. The county’s positivity rate was 3.9%, which is higher than the 3.0% seen last week and the 2.6% of the preceding week. The county had added 26 new cases in each of the last two weeks, so a slight increase in new cases.

Florida’s vaccination trends mirror those found in the United States, as the numbers have been steadily declining.

According to the Centers for Disease Control and Prevention, there have been 178.49 million people in the U.S. to have received at least one dose of the vaccine, which is 53.8% of the population and 65.8% of the U.S. adult population. There have been 151,615,554 people declared fully vaccinated, which means they have received both doses of the Moderna or Pfizer vaccines or one shot of the single-dose Johnson & Johnson vaccine.

The U.S. has averaged 816,831 vaccine doses per day over the past week. At the current rate it will take an additional six months to reach the targeted goal of vaccinating 75% of the population.

Included in today’s edition of the Highlands News-Sun is a combined Love Your Locals and Hiring Locals section. Please be sure to check it out.