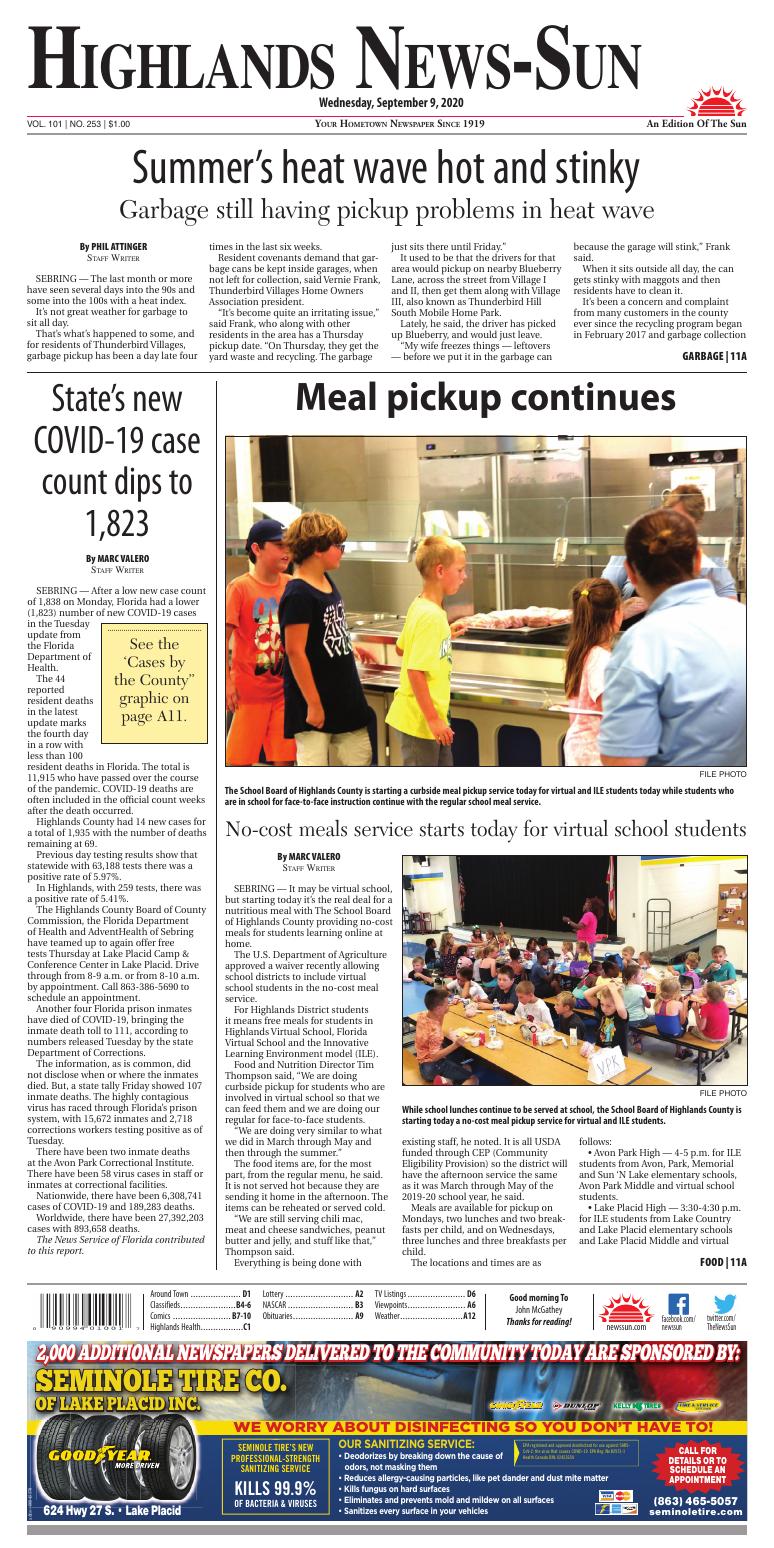 SEBRING — The last month or more have seen several days into the 90s and some into the 100s with a heat index.

It’s not great weather for garbage to sit all day.

That’s what’s happened to some, and for residents of Thunderbird Villages, garbage pickup has been a day late four times in the last six weeks.

“It’s become quite an irritating issue,” said Frank, who along with other residents in the area has a Thursday pickup date. “On Thursday, they get the yard waste and recycling. The garbage just sits there until Friday.”

It used to be that the drivers for that area would pickup on nearby Blueberry Lane, across the street from Village I and II, then get them along with Village III, also known as Thunderbird Hill South Mobile Home Park.

Lately, he said, the driver has picked up Blueberry, and would just leave.

“My wife freezes things — leftovers — before we put it in the garbage can because the garage will stink,” Frank said.

When it sits outside all day, the can gets stinky with maggots and then residents have to clean it.

It’s been a concern and complaint from many customers in the county ever since the recycling program began in February 2017 and garbage collection dropped from twice per week to once a week.

“I’m told they have a dumping issue at the landfill and then told the driver picks his own route,” Frank said.

“I know that there’s been a lot of lightning closures this time of year,” Howerton said. “We’ve had a lot of them in July and August.”

When weather equipment detects lightning strikes in the area, the landfill must shut down to prevent anyone or any equipment from being hit by lightning while at the top of the mound because it’s the highest point for miles.

Howerton said residents are told to have their garbage out on the curb by 7 a.m. The window for pickup is actually from 7 a.m. to 9 p.m., but Florida Department of Transportation regulations limit the number of hours truck drivers may stay on the road in one day.

Drivers will want to pick up loads as early as possible to avoid getting caught by thunderstorms.

However, if a storm does delay them for a day, it can delay every other garbage pickup that week, Howerton said.

He knows that last week — one of Frank’s missed pickups — Waste Connections had a mechanical breakdown on a truck.

“That’s understandable and even allowable under the contract,” Howerton said.

The hauler is not short of people, he said. Sometimes the weather can shut down the garbage, even when it isn’t more than just thunder and rain.

Anyone who has had a missed pickup is advised to contact Waste Connections at 863-655-0005 to let operators there know about it.

Washing cans out is a periodic thing that residents will need to do, Howerton said, simply as a matter of course to keep the smell down and prevent flies.

Aside from that, people can sign up for weather alerts on their smartphones. If you receive a lightning alert sometime from midday to late afternoon, it might affect the next day’s garbage pickup.

While school lunches continue to be served at school, the School Board of Highlands County is starting today a no-cost meal pickup service for virtual and ILE students.

The School Board of Highlands County is starting a curbside meal pickup service today for virtual and ILE students today while students who are in school for face-to-face instruction continue with the regular school meal service.

SEBRING — It may be virtual school, but starting today it's the real deal for a nutritious meal with The School Board of Highlands County providing no-cost meals for students learning online at home.

The U.S. Department of Agriculture approved a waiver recently allowing school districts to include virtual school students in the no-cost meal service.

Food and Nutrition Director Tim Thompson said, "We are doing curbside pickup for students who are involved in virtual school so that we can feed them and we are doing our regular for face-to-face students.

"We are doing very similar to what we did in March through May and then through the summer."

The food items are, for the most part, from the regular menu, he said. It is not served hot because they are sending it home in the afternoon. The items can be reheated or served cold.

"We are still serving chili mac, meat and cheese sandwiches, peanut butter and jelly, and stuff like that," Thompson said.

Everything is being done with existing staff, he noted. It is all USDA funded through CEP (Community Eligibility Provision) so the district will have the afternoon service the same as it was March through May of the 2019-20 school year, he said.

The locations and times are as follows:

Go to the School Board of Highlands County's Facebook page for a link to complete a brief survey to get on the district's roster.

Parents should call the district office at 863-471-5676 to verify they are on the roster at the right school.

SEBRING — After a low new case count of 1,838 on Monday, Florida had a lower (1,823) number of new COVID-19 cases in the Tuesday update from the Florida Department of Health.

The 44 reported resident deaths in the latest update marks the fourth day in a row with less than 100 resident deaths in Florida. The total is 11,915 who have passed over the course of the pandemic. COVID-19 deaths are often included in the official count weeks after the death occurred.

Highlands County had 14 new cases for a total of 1,935 with the number of deaths remaining at 69.

Previous day testing results show that statewide with 63,188 tests there was a positive rate of 5.97%.

The Highlands County Board of County Commission, the Florida Department of Health and AdventHealth of Sebring have teamed up to again offer free tests Thursday at Lake Placid Camp & Conference Center in Lake Placid. Drive through from 8-9 a.m. or from 8-10 a.m. by appointment. Call 863-386-5690 to schedule an appointment.

Another four Florida prison inmates have died of COVID-19, bringing the inmate death toll to 111, according to numbers released Tuesday by the state Department of Corrections.

The information, as is common, did not disclose when or where the inmates died. But, a state tally Friday showed 107 inmate deaths. The highly contagious virus has raced through Florida’s prison system, with 15,672 inmates and 2,718 corrections workers testing positive as of Tuesday. 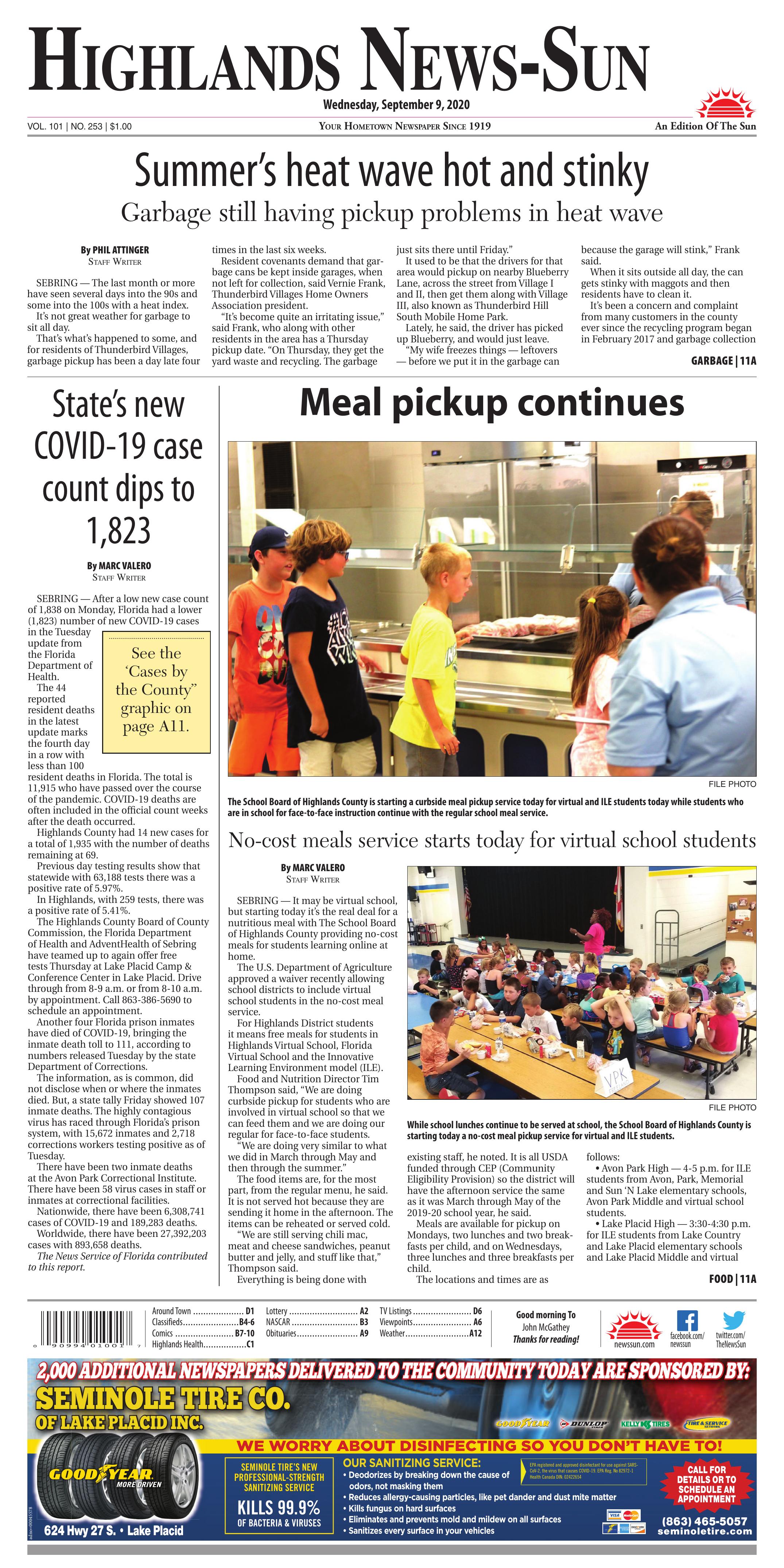