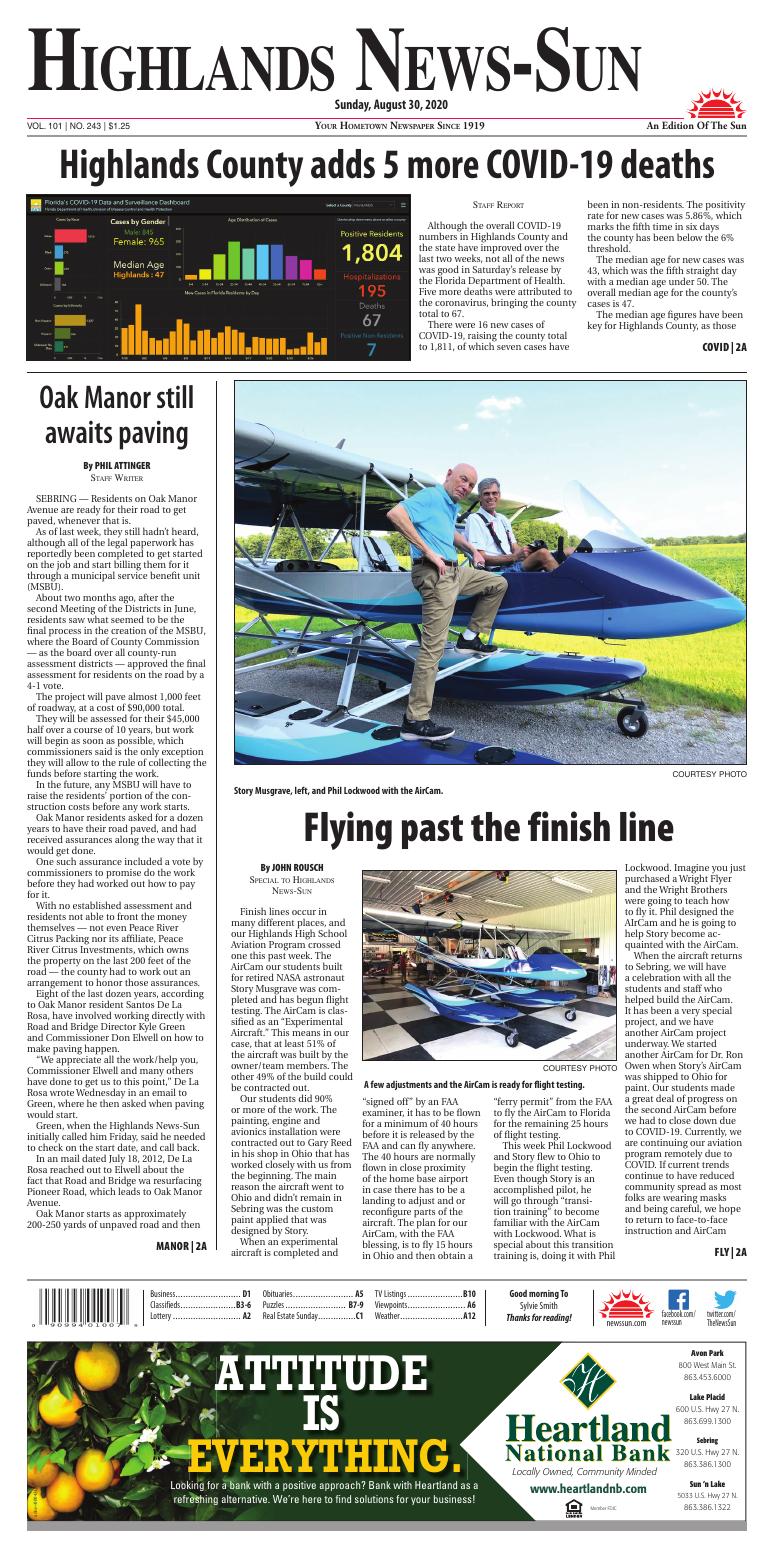 Although the overall COVID-19 numbers in Highlands County and the state have improved over the last two weeks, not all of the news was good in Saturday’s release by the Florida Department of Health. Five more deaths were attributed to the coronavirus, bringing the county total to 67.

There were 16 new cases of COVID-19, raising the county total to 1,811, of which seven cases have been in non-residents. The positivity rate for new cases was 5.86%, which marks the fifth time in six days the county has been below the 6% threshold.

In nearby counties, DeSoto County saw a slight increase in new cases and now has 1,472 cases, which have been responsible for 22 deaths. DeSoto has seen 230 cases (16%) related to a correctional facility and its percentage is well above the state average of 3%. But DeSoto has also seen a median age of 37 for all cases, so the percentage of deaths in cases has been much better than Highlands County and also below the state average.

Glades County has not had any new cases the past two days, but also has given just five tests in that period. The majority of cases in the county have been correctional facility cases, which have made up 272 of the county’s 452 positive cases. Glades County has seen three COVID-19 deaths and has seen a median age of all cases of 38.

Hardee County saw an increase of nine new cases, bringing its total to 1,091 and there have been nine deaths in the county. The median age of Hardee cases is 35.

Okeechobee County had an increase of 14 new cases, bringing its total to 1,234. The median age of cases is 38. There have been 15 deaths in the county.

Polk County had an increase of just over 100 cases and now stands at 16,803. Polk County has also seen a number of cases in the long-term care facilities, with 1,638, which accounts for 9.74% of all cases. The median age of Polk County cases is 40 and there have been 442 deaths.

On the state level, there were 3,197 new cases, which brought the state total to 619,003. It was the seventh straight day Florida has seen less than 4,000 new cases and the positivity rate was below the magical 5% threshold at 4.97% for the day.

Nationally, there have now been 5.94 million cases and 182,217 deaths, according to Johns Hopkins University Center for Systems Science and Engineering.

Story Musgrave, left, and Phil Lockwood with the AirCam.

A few adjustments and the AirCam is ready for flight testing.

Finish lines occur in many different places, and our Highlands High School Aviation Program crossed one this past week. The AirCam our students built for retired NASA astronaut Story Musgrave was completed and has begun flight testing. The AirCam is classified as an “Experimental Aircraft.” This means in our case, that at least 51% of the aircraft was built by the owner/team members. The other 49% of the build could be contracted out.

Our students did 90% or more of the work. The painting, engine and avionics installation were contracted out to Gary Reed in his shop in Ohio that has worked closely with us from the beginning. The main reason the aircraft went to Ohio and didn’t remain in Sebring was the custom paint applied that was designed by Story.

When an experimental aircraft is completed and “signed off” by an FAA examiner, it has to be flown for a minimum of 40 hours before it is released by the FAA and can fly anywhere. The 40 hours are normally flown in close proximity of the home base airport in case there has to be a landing to adjust and or reconfigure parts of the aircraft. The plan for our AirCam, with the FAA blessing, is to fly 15 hours in Ohio and then obtain a “ferry permit” from the FAA to fly the AirCam to Florida for the remaining 25 hours of flight testing.

This week Phil Lockwood and Story flew to Ohio to begin the flight testing. Even though Story is an accomplished pilot, he will go through “transition training” to become familiar with the AirCam with Lockwood. What is special about this transition training is, doing it with Phil Lockwood. Imagine you just purchased a Wright Flyer and the Wright Brothers were going to teach how to fly it. Phil designed the AIrCam and he is going to help Story become acquainted with the AirCam.

When the aircraft returns to Sebring, we will have a celebration with all the students and staff who helped build the AirCam. It has been a very special project, and we have another AirCam project underway. We started another AirCam for Dr. Ron Owen when Story’s AirCam was shipped to Ohio for paint. Our students made a great deal of progress on the second AirCam before we had to close down due to COVID-19. Currently, we are continuing our aviation program remotely due to COVID. If current trends continue to have reduced community spread as most folks are wearing masks and being careful, we hope to return to face-to-face instruction and AirCam building for the second semester in January.

Our high school aviation program is an example of many people and organizations coming together to help our students pursue options and opportunities for their future. Thank you all for helping this program take flight.

SEBRING — Residents on Oak Manor Avenue are ready for their road to get paved, whenever that is.

As of last week, they still hadn’t heard, although all of the legal paperwork has reportedly been completed to get started on the job and start billing them for it through a municipal service benefit unit (MSBU).

About two months ago, after the second Meeting of the Districts in June, residents saw what seemed to be the final process in the creation of the MSBU, where the Board of County Commission — as the board over all county-run assessment districts — approved the final assessment for residents on the road by a 4-1 vote.

They will be assessed for their $45,000 half over a course of 10 years, but work will begin as soon as possible, which commissioners said is the only exception they will allow to the rule of collecting the funds before starting the work.

In the future, any MSBU will have to raise the residents’ portion of the construction costs before any work starts.

Oak Manor residents asked for a dozen years to have their road paved, and had received assurances along the way that it would get done.

One such assurance included a vote by commissioners to promise do the work before they had worked out how to pay for it.

With no established assessment and residents not able to front the money themselves — not even Peace River Citrus Packing nor its affiliate, Peace River Citrus Investments, which owns the property on the last 200 feet of the road — the county had to work out an arrangement to honor those assurances.

Eight of the last dozen years, according to Oak Manor resident Santos De La Rosa, have involved working directly with Road and Bridge Director Kyle Green and Commissioner Don Elwell on how to make paving happen.

“We appreciate all the work/help you, Commissioner Elwell and many others have done to get us to this point,” De La Rosa wrote Wednesday in an email to Green, where he then asked when paving would start.

Green, when the Highlands News-Sun initially called him Friday, said he needed to check on the start date, and call back.

In an mail dated July 18, 2012, De La Rosa reached out to Elwell about the fact that Road and Bridge wa resurfacing Pioneer Road, which leads to Oak Manor Avenue.

In an email that same day, Elwell replied that he had forwarded De La Rosa’s message to Green.

“There is a fairly detailed evaluation involved for all of our county roads, including looking at condition, volume, [number] of homes served, length/width, etc. and all of our county roads are then prioritized based on this info (sic),” Elwell’s email stated. “With diminishing revenues during this economy, we’re able to pave less roads than ever, but we’ll see what Kyle has to say and go from there.”

In an email on July 24, 2012, Green told De La Rosa the work on Oak Manor Avenue was a work order to control erosion onto a property on the east side of the street.

“I wanted to follow up with you and let you know that we are looking into a few things that seem to be somewhat unusual when it comes to Oak Manor Avenue,” Green wrote. “We normally do not see a paved maintained section of road that is not connected to another paved section. We have a few in the County, but not many.”

Green said, at the time, that then-Highlands County Road Inspector Brian Miller would research the road to see when it was taken over for maintenance and why the limits are different than most other road segments in the county.

Green then pledged to either get back with De La Rosa or have Miller do so after gathering information.

In an email on July 25, 2012, De La Rosa told Green and Elwell that he had been trying for six years to get the unpaved part of the road covered, but also thanked them for their efforts. 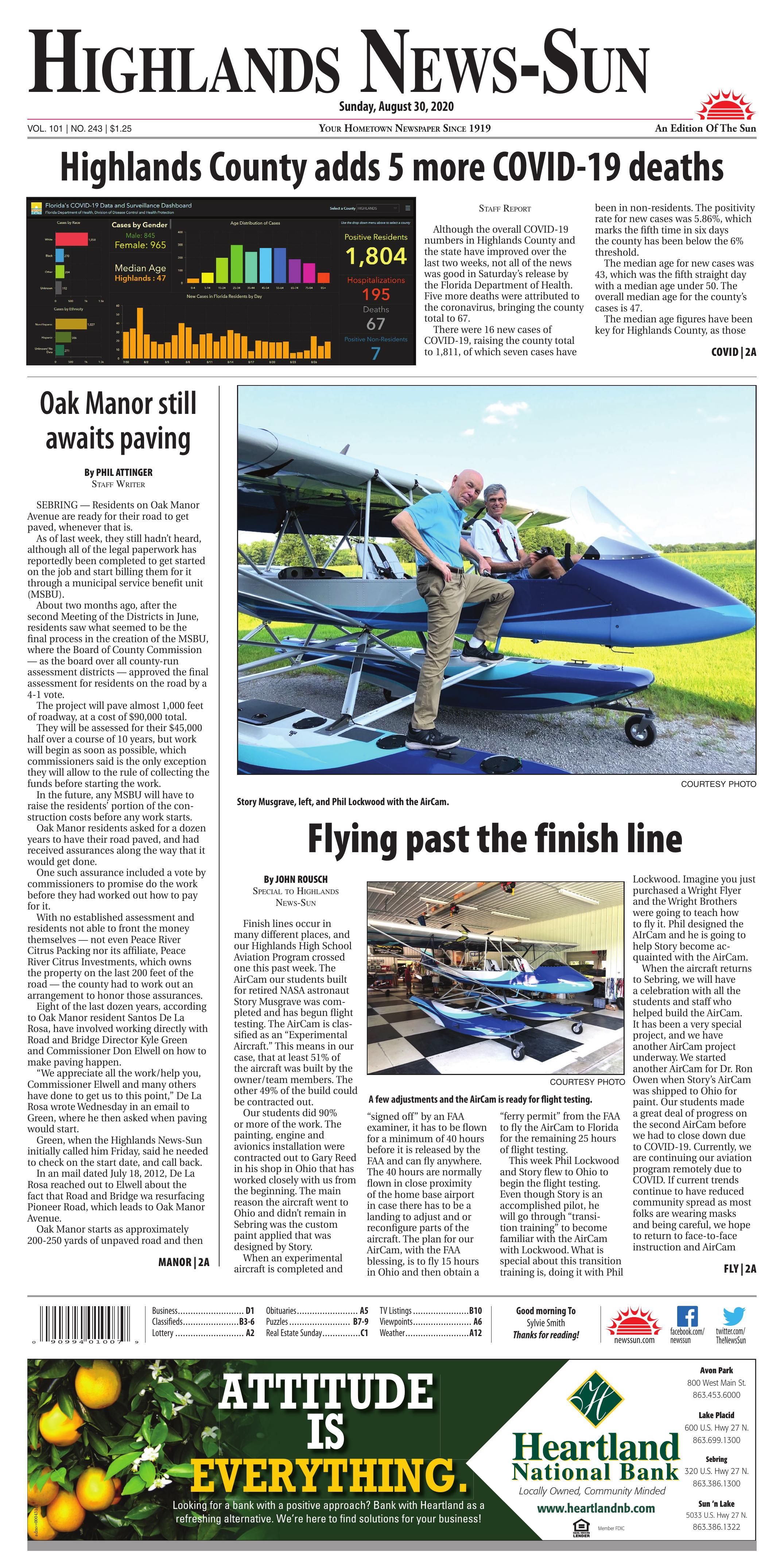