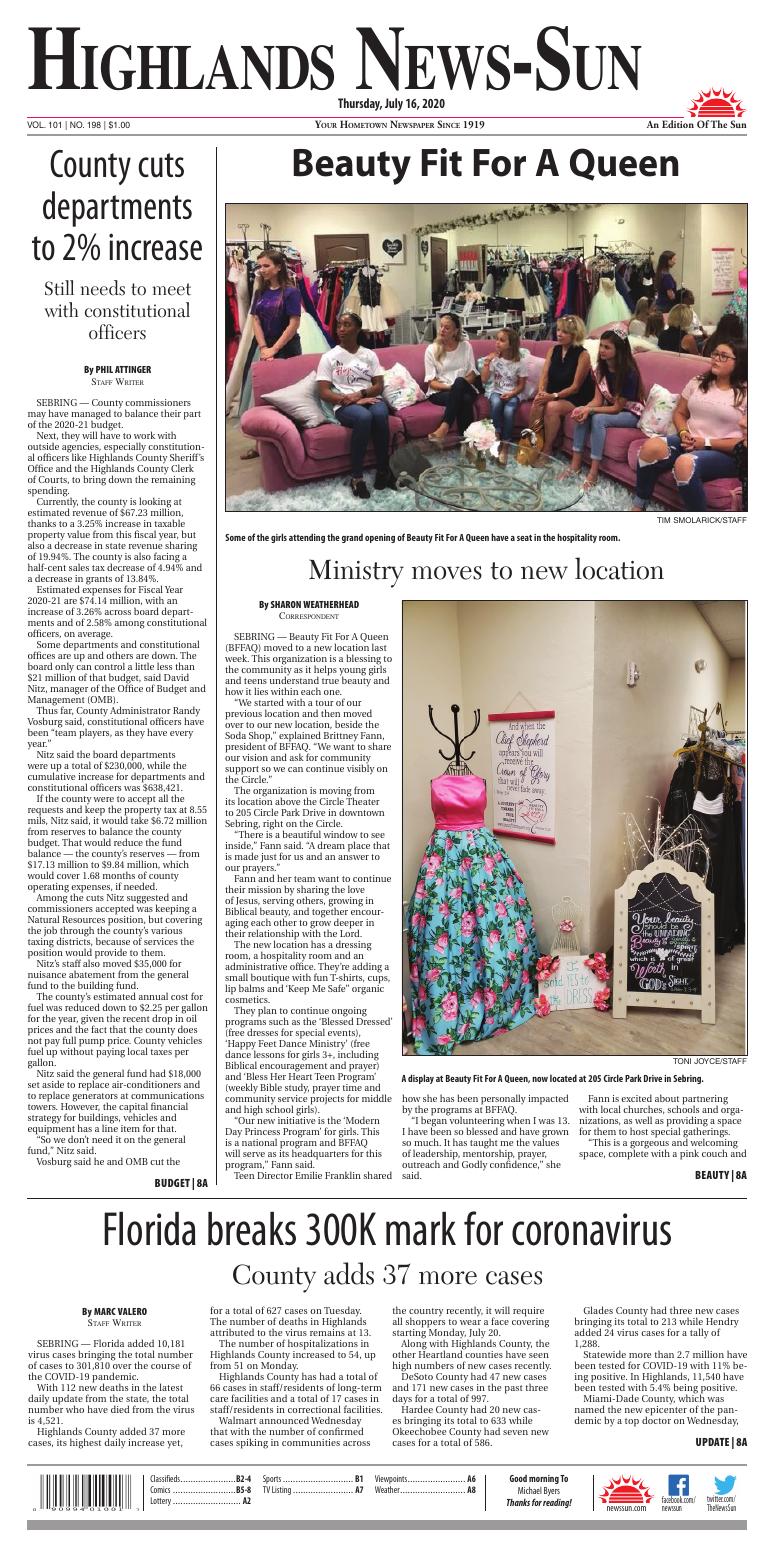 Some of the girls attending the grand opening of Beauty Fit For A Queen have a seat in the hospitality room.

A display at Beauty Fit For A Queen, now located at 205 Circle Park Drive in Sebring.

Brittney Fann, president of Beauty Fit For A Queen, shows off the new location on Circle Park Drive where they will offer a number of programs and a small boutique for those who may be looking for the special dress for a special event.

SEBRING — Beauty Fit For A Queen (BFFAQ) moved to a new location last week. This organization is a blessing to the community as it helps young girls and teens understand true beauty and how it lies within each one.

“We started with a tour of our previous location and then moved over to our new location, beside the Soda Shop,” explained Brittney Fann, president of BFFAQ. “We want to share our vision and ask for community support so we can continue visibly on the Circle.”

The organization is moving from its location above the Circle Theater to 205 Circle Park Drive in downtown Sebring, right on the Circle.

“There is a beautiful window to see inside,” Fann said. “A dream place that is made just for us and an answer to our prayers.”

Fann and her team want to continue their mission by sharing the love of Jesus, serving others, growing in Biblical beauty, and together encouraging each other to grow deeper in their relationship with the Lord.

The new location has a dressing room, a hospitality room and an administrative office. They’re adding a small boutique with fun T-shirts, cups, lip balms and ‘Keep Me Safe” organic cosmetics.

“Our new initiative is the ‘Modern Day Princess Program’ for girls. This is a national program and BFFAQ will serve as its headquarters for this program,” Fann said.

Teen Director Emilie Franklin shared how she has been personally impacted by the programs at BFFAQ.

“I began volunteering when I was 13. I have been so blessed and have grown so much. It has taught me the values of leadership, mentorship, prayer, outreach and Godly confidence,” she said.

Fann is excited about partnering with local churches, schools and organizations, as well as providing a space for them to host special gatherings.

“This is a gorgeous and welcoming space, complete with a pink couch and loving atmosphere, where it will be a safe place for fellowship and a place of prayer,” Fann said.

The Queen volunteers participated in giving tours. At each post the volunteers were excited and passionate about why they believe the mission is so important for young girls.

“BFFAQ was the first place that taught me about true beauty,” said Taylor Mendez, program leader. “It is God who says ‘I am what matters,’ not what the world has taught me beauty should look like.”

“BFFAQ means more to me than words can describe,” said Reagan Richards, teen director. “It allows me to give back to the community and grow in my faith.”

The team has been offering their weekly teen program by Zoom, but are starting to offer some camps and events again. They are adhering to small gatherings and using all safety precautions.

“I think parents and children are excited about moving forward in our mission during such a time as this,” Fann said.

They will be holding an open house in August, so be sure to watch for information. From July 27 to Aug. 1 they will offer the ‘Walk it Like You Talk it’ Modern Day Princess Camp. There will also be a Princess Dance Camp in August.

“The public can help by praying for us, telling friends about our programs, coming in to shop in our sweet little boutique, hosting a special event at our location or by becoming a financial partner,” Fann said.

BFFAQ is a 501c3 non-profit corporation and donations are tax deductible.

To contribute, you can do so online at www.beautyfitforaqueen.org/donate. To send in a donation check, please make it payable to Beauty Fit For a Queen and mail to P.O. Box 1534, Avon Park, FL 33826.

To set up a meeting for a small group, church or organization or school, please email to info.beautyfitforaqueen@gmail.com.

A close look at the positive cases of coronavirus in Highlands County, according to Wednesday’s report from the Florida Department of Health.

SEBRING — Florida added 10,181 virus cases bringing the total number of cases to 301,810 over the course of the COVID-19 pandemic.

With 112 new deaths in the latest daily update from the state, the total number who have died from the virus is 4,521.

Highlands County added 37 more cases, its highest daily increase yet, for a total of 627 cases on Tuesday. The number of deaths in Highlands attributed to the virus remains at 13.

The number of hospitalizations in Highlands County increased to 54, up from 51 on Monday.

Walmart announced Wednesday that with the number of confirmed cases spiking in communities across the country recently, it will require all shoppers to wear a face covering starting Monday, July 20.

Along with Highlands County, the other Heartland counties have seen high numbers of new cases recently.

Glades County had three new cases bringing its total to 213 while Hendry added 24 virus cases for a tally of 1,288.

Miami-Dade County, which was named the new epicenter of the pandemic by a top doctor on Wednesday, had 2,483 new cases and Broward County added 1,344 cases.

SEBRING — County commissioners may have managed to balance their part of the 2020-21 budget.

Currently, the county is looking at estimated revenue of $67.23 million, thanks to a 3.25% increase in taxable property value from this fiscal year, but also a decrease in state revenue sharing of 19.94%. The county is also facing a half-cent sales tax decrease of 4.94% and a decrease in grants of 13.84%.

Estimated expenses for Fiscal Year 2020-21 are $74.14 million, with an increase of 3.26% across board departments and of 2.58% among constitutional officers, on average.

Some departments and constitutional offices are up and others are down. The board only can control a little less than $21 million of that budget, said David Nitz, manager of the Office of Budget and Management (OMB).

Thus far, County Administrator Randy Vosburg said, constitutional officers have been “team players, as they have every year.”

Nitz said the board departments were up a total of $230,000, while the cumulative increase for departments and constitutional officers was $638,421.

If the county were to accept all the requests and keep the property tax at 8.55 mils, Nitz said, it would take $6.72 million from reserves to balance the county budget. That would reduce the fund balance — the county’s reserves — from $17.13 million to $9.84 million, which would cover 1.68 months of county operating expenses, if needed.

Among the cuts Nitz suggested and commissioners accepted was keeping a Natural Resources position, but covering the job through the county’s various taxing districts, because of services the position would provide to them.

Nitz’s staff also moved $35,000 for nuisance abatement from the general fund to the building fund.

The county’s estimated annual cost for fuel was reduced down to $2.25 per gallon for the year, given the recent drop in oil prices and the fact that the county does not pay full pump price. County vehicles fuel up without paying local taxes per gallon.

Nitz said the general fund had $18,000 set aside to replace air-conditioners and to replace generators at communications towers. However, the capital financial strategy for buildings, vehicles and equipment has a line item for that.

“So we don’t need it on the general fund,” Nitz said.

Vosburg said he and OMB cut the budget for new library publications by 10%, or $16,744, which would leave a 5% increase.

It’s not as much of an increase as it would have been for that line item, Vosburg said, but it’s still an increase for the year.

Also, the county would look at reducing education/training, travel per diem and central services budgets by a total of $60,693. Some trainings are going online, so that saves hotels and travel expenses, Vosburg said. Those combined reductions hold the board’s department budgets to a 2% increase.

Commissioner Don Elwell, the board liaison to OMB, asked if commissioners wanted to look more closely at each department.

To micromanage it any further down, Handley said, would be unnecessary.

When asked about salaries, Vosburg said the county gives a 1% cost of living adjustment (COLA) to all employees on Oct. 1, with merit pay increases up to 3% halfway through the year on April 1, 2021.

Nitz said the county never spends all of that budget.

Commissioner Arlene Tuck asked if the county could just give the COLA and save money by skipping the merit increase.

Vosburg said the reductions done Tuesday would take the needed reserve down to $6.2 million.

Elwell said it would be ideal to have all rows at zero and under, and suggested the sheriff and clerk would have to come down somewhat.

The county looked at 2.5 months of reserve before starting the process, Elwell said.

Vosburg warned that when the County Commission sets the top millage rate for the year next Tuesday. It will be higher than they intend and will not be where they want to end or intend to end.

“I’d like to take David’s [Nitz] rollback rate and add 2% to that,” Tuck said, referring to the rollback rate of 8.3142 mils, which would bring in the same amount from property taxes, after adjusting for property value increases. 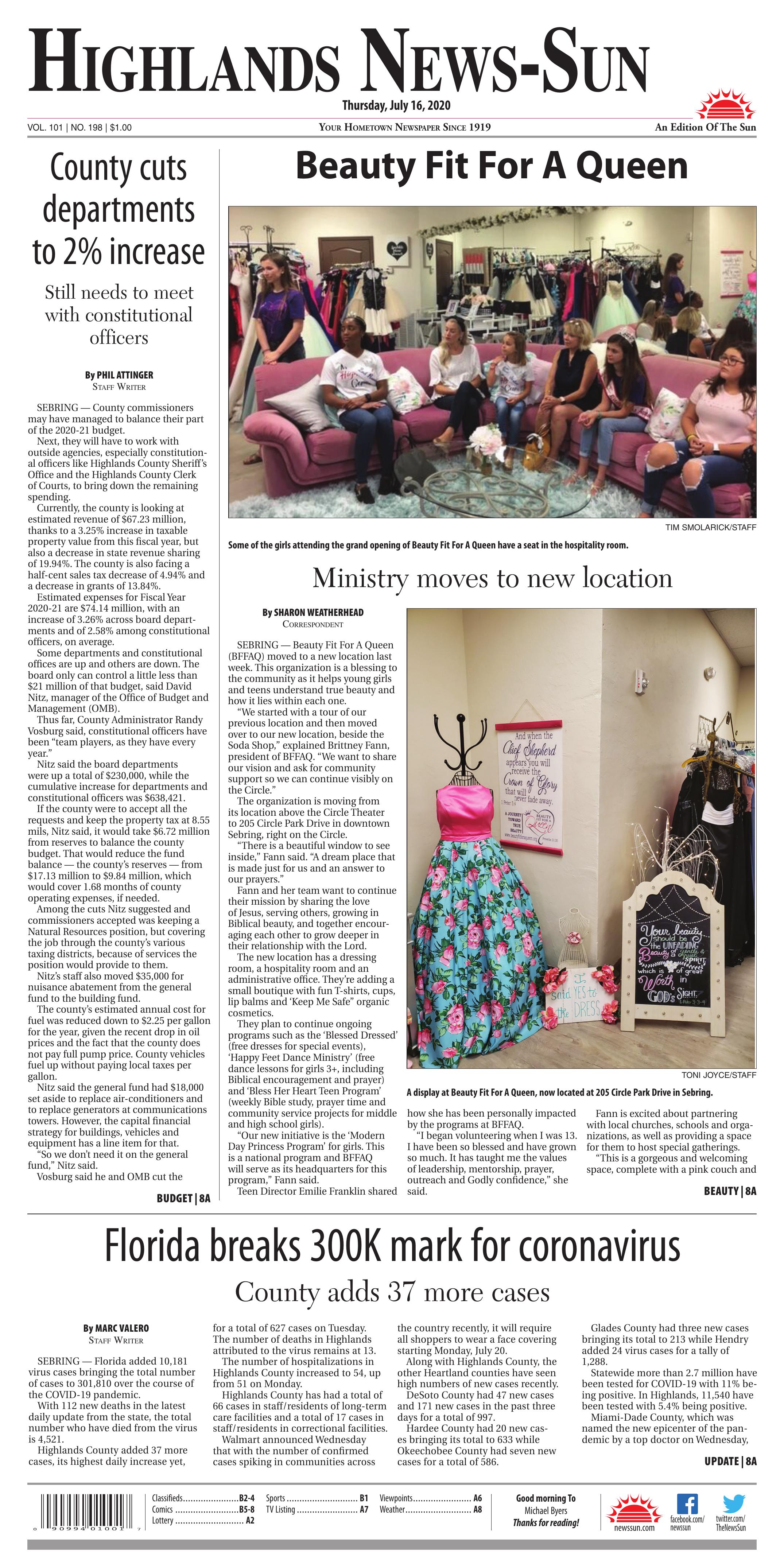