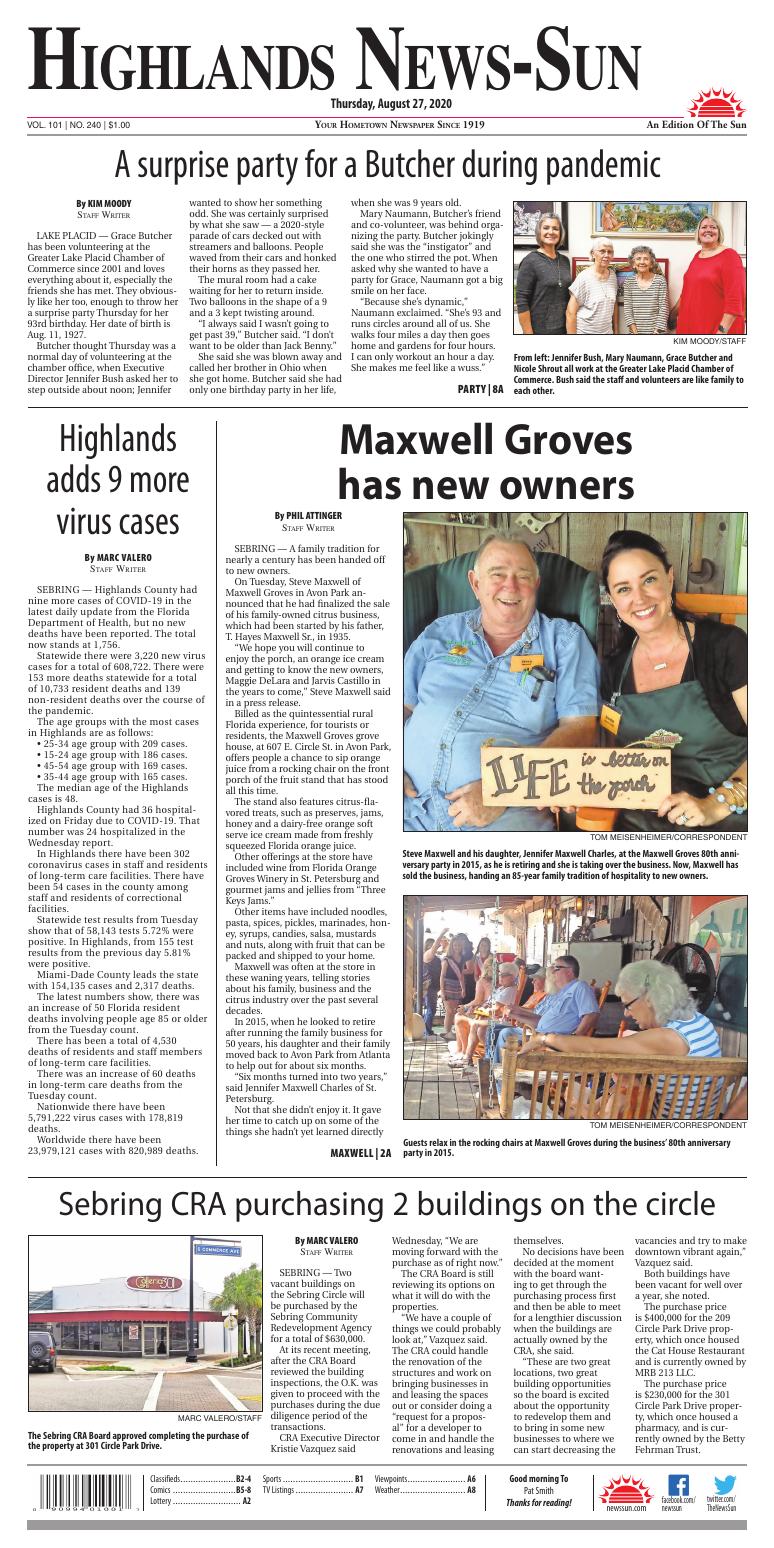 Grace Buthcer is trying to turn her balloons around to read “39” instead of “93.” Nice try!

Friends drive decorated cars by the Greater Lake Placid Chamber of Commerce and wave to Grace Butcher to celebrate her 93rd birthday.

Grace Buthcer watchs a birthday parade with her friends from the Greater Lake Placid Chamber of Commerce on Thursday. Grace turned 93 years young.

From left: Jennifer Bush, Mary Naumann, Grace Butcher and Nicole Shrout all work at the Greater Lake Placid Chamber of Commerce. Bush said the staff and volunteers are like family to each other.

LAKE PLACID — Grace Butcher has been volunteering at the Greater Lake Placid Chamber of Commerce since 2001 and loves everything about it, especially the friends she has met. They obviously like her too, enough to throw her a surprise party Thursday for her 93rd birthday. Her date of birth is Aug. 11, 1927.

Butcher thought Thursday was a normal day of volunteering at the chamber office, when Executive Director Jennifer Bush asked her to step outside about noon; Jennifer wanted to show her something odd. She was certainly surprised by what she saw — a 2020-style parade of cars decked out with streamers and balloons. People waved from their cars and honked their horns as they passed her.

The mural room had a cake waiting for her to return inside. Two balloons in the shape of a 9 and a 3 kept twisting around.

“I always said I wasn’t going to get past 39,” Butcher said. “I don’t want to be older than Jack Benny.”

She said she was blown away and called her brother in Ohio when she got home. Butcher said she had only one birthday party in her life, when she was 9 years old.

Mary Naumann, Butcher’s friend and co-volunteer, was behind organizing the party. Butcher jokingly said she was the “instigator” and the one who stirred the pot. When asked why she wanted to have a party for Grace, Naumann got a big smile on her face.

“Because she’s dynamic,” Naumann exclaimed. “She’s 93 and runs circles around all of us. She walks four miles a day then goes home and gardens for four hours. I can only workout an hour a day. She makes me feel like a wuss.”

Bush and the chamber of commerce rely heavily on their volunteers and was happy to celebrate with Butcher.

“Our volunteers are like family,” Bush exclaimed. “The Greater Lake Placid Chamber of Commerce is blessed to have some of the finest ladies give of their time. We couldn’t do what we do without their devotion and talents. Grace is a valued volunteer for the chamber and we couldn’t wait to celebrate her 93rd birthday with her in a big way! I am constantly impressed by these wonderful ladies. They always go above and beyond to help out where needed and over the years have forged friendships with each other outside of work. Getting together for Grace’s birthday is just icing on the cake!”

Butcher was born and raised in the mountains of West Virginia. In 1950, her husband Frank and she moved to Hialeah so he could attend a “small aviation school” called Embry-Riddle. He worked with the airlines for 30 years. The couple was married for 51 and a half years. The couple did not have children.

Hialeah was getting too big and busy for her taste. Grace’s sister was in Lake Placid and the couple moved here to be near her in 1998. Her sister died just five weeks after her husband died 19 years ago. Butcher told her friend and neighbor Maryel Clare that she was tired of gardening and there was only so many weeds she could pull. Clare told her to work at the Chamber.

“I said ‘OK,’ I’ve been here every since,” Butcher laughed. “I’ve worked with so many people over the years. They’ve come and gone but I am still here.”

Butcher also volunteers at her church’s library but that has been closed since March due to COVID-19.

When asked what her favorite part of volunteering is, Butcher quickly answered, “the people.”

Butcher is very independent and cleans her car, does her own yard work, cleans her own pool and has no desire to slow down.

She says she does not know the secret to longevity but it must be in the genes.

“It’s not the food, cause I was raised on fried food,” she said. “Lots of grease and bacon grease. I never smoked or drank. I lived in a family where you just didn’t do that.”

Steve Maxwell and his daughter, Jennifer Maxwell Charles, at the Maxwell Groves 80th anniversary party in 2015, as he is retiring and she is taking over the business. Now, Maxwell has sold the business, handing an 85-year family tradition of hospitality to new owners.

Guests relax in the rocking chairs at Maxwell Groves during the business’ 80th anniversary party in 2015.

A cone of orange juice soft-serve ice cream dominates the foreground of a porch full of rocking chairs at Maxwell Groves. Jennifer Maxwell Charles, the youngest of the family, said the grove house is not busy in August, but usually sees big crowds in November.

SEBRING — A family tradition for nearly a century has been handed off to new owners.

On Tuesday, Steve Maxwell of Maxwell Groves in Avon Park announced that he had finalized the sale of his family-owned citrus business, which had been started by his father, T. Hayes Maxwell Sr., in 1935.

“We hope you will continue to enjoy the porch, an orange ice cream and getting to know the new owners, Maggie DeLara and Jarvis Castillo in the years to come,” Steve Maxwell said in a press release.

Billed as the quintessential rural Florida experience, for tourists or residents, the Maxwell Groves grove house, at 607 E. Circle St. in Avon Park, offers people a chance to sip orange juice from a rocking chair on the front porch of the fruit stand that has stood all this time.

Other offerings at the store have included wine from Florida Orange Groves Winery in St. Petersburg and gourmet jams and jellies from “Three Keys Jams.”

Other items have included noodles, pasta, spices, pickles, marinades, honey, syrups, candies, salsa, mustards and nuts, along with fruit that can be packed and shipped to your home.

Maxwell was often at the store in these waning years, telling stories about his family, business and the citrus industry over the past several decades.

In 2015, when he looked to retire after running the family business for 50 years, his daughter and their family moved back to Avon Park from Atlanta to help out for about six months.

Not that she didn’t enjoy it. It gave her time to catch up on some of the things she hadn’t yet learned directly from her dad, or hadn’t done in a while with the family business.

Like all the third-generation Floridian Maxwell kids — even as the youngest — she had a close relationship to the grove house growing up.

They all learned how to grass-pack oranges and wrap orange trees on cold nights, as well as how to run the store — although she was more connected to her grandmother in those early years, she said.

After a couple of years back in Avon Park, she needed to list the property. Her father is almost 80 and she and her husband have careers and lives to live.

Steve Maxwell now thanks the individuals and the local community for being a part of the Maxwell legacy over the last 85 years.

“I made a deal with a young man who was working with us for the last three years,” Steve Maxwell said Wednesday, adding that DeLara and Castillo are “really good folks with a lot of great ideas.”

What those ideas are, he said, he didn’t know in detail. Like others, he would have to wait and see.

The sale includes the packing house and the store and the house next door with a well.

The surrounding groveland belongs to Maxwell’s sister and he will still live in a two-story home on the west end of the property.

“I’m ready to slow down,” Maxwell said of the decision to sell, citing several age-related health issues. “It was a blessing.”

However, he plans to visit the grove house often and continue rocking on the front porch, talking about old times.

“I really appreciate all my friends in Avon Park [supporting me] through the years,” Maxwell said, “and want them to continue supporting Jarvis and Maggie.”

The grove house sits just a few miles off Main Street, where it’s been since Steve Maxwell’s dad and mom settled there in 1928 as orange grove caretakers and absentee owners.

In 1966 Steve returned from military service and opened a small store right next to a refurbished log cabin where his children were raised.

When Charles moved back to help, she didn’t want to see him sell the business.

“I have a strong business background, so felt it was time to bring my experience here to keep the family legacy going,” Charles told the Highlands News-Sun at the time.

To showcase the history of the area, a collection of old family photos decorates the store. Nearby, a child’s palm print on the ground shows where Charles, as a young girl, squished her hand into wet concrete.

To visit the store, head east on Main Street in Avon Park, through downtown, over the railroad tracks until you see the sign directing you left toward the store.

You can order fruit online at maxwellgrovescountrystore.com or call 863-453-3938.

The Sebring CRA Board approved completing the purchase of the property at 301 Circle Park Drive.

SEBRING — Two vacant buildings on the Sebring Circle will be purchased by the Sebring Community Redevelopment Agency for a total of $630,000.

At its recent meeting, after the CRA Board reviewed the building inspections, the O.K. was given to proceed with the purchases during the due diligence period of the transactions.

CRA Executive Director Kristie Vazquez said Wednesday, “We are moving forward with the purchase as of right now.”

The CRA Board is still reviewing its options on what it will do with the properties.

No decisions have been decided at the moment with the board wanting to get through the purchasing process first and then be able to meet for a lengthier discussion when the buildings are actually owned by the CRA, she said.

“These are two great locations, two great building opportunities so the board is excited about the opportunity to redevelop them and to bring in some new businesses to where we can start decreasing the vacancies and try to make downtown vibrant again,” Vazquez said.

Both buildings have been vacant for well over a year, she noted.

The purchase price is $400,000 for the 209 Circle Park Drive property, which once housed the Cat House Restaurant and is currently owned by MRB 213 LLC.

The purchase price is $230,000 for the 301 Circle Park Drive property, which once housed a pharmacy, and is currently owned by the Betty Fehrman Trust.

SEBRING — Highlands County had nine more cases of COVID-19 in the latest daily update from the Florida Department of Health, but no new deaths have been reported. The total now stands at 1,756.

The age groups with the most cases in Highlands are as follows:

The median age of the Highlands cases is 48.

Highlands County had 36 hospitalized on Friday due to COVID-19. That number was 24 hospitalized in the Wednesday report.

The latest numbers show, there was an increase of 50 Florida resident deaths involving people age 85 or older from the Tuesday count.

There has been a total of 4,530 deaths of residents and staff members of long-term care facilities.

There was an increase of 60 deaths in long-term care deaths from the Tuesday count. 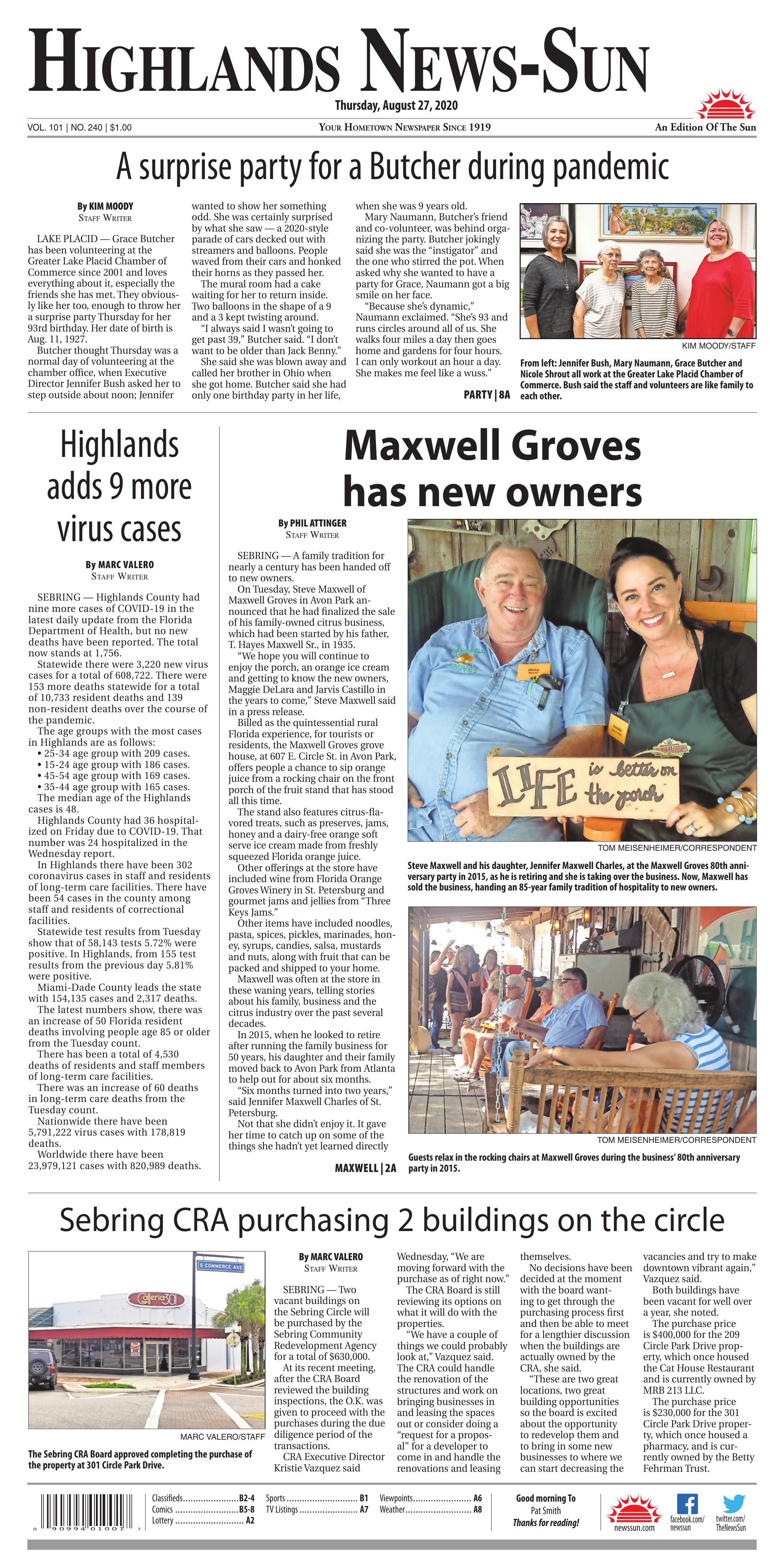