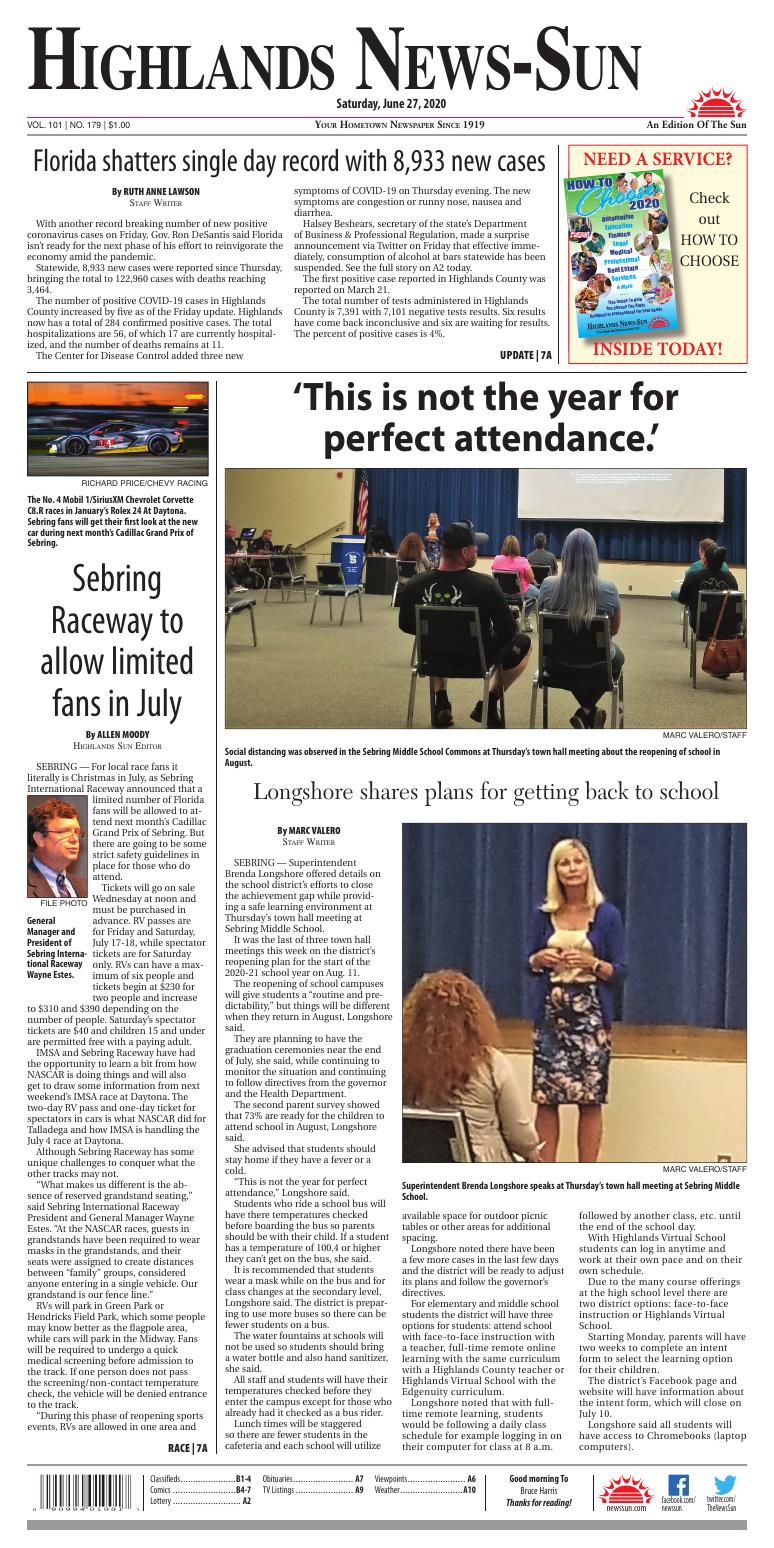 With another record breaking number of new positive coronavirus cases on Friday, Gov. Ron DeSantis said Florida isn’t ready for the next phase of his effort to reinvigorate the economy amid the pandemic.

The number of positive COVID-19 cases in Highlands County increased by five as of the Friday update. Highlands now has a total of 284 confirmed positive cases. The total hospitalizations are 56, of which 17 are currently hospitalized, and the number of deaths remains at 11.

The Center for Disease Control added three new symptoms of COVID-19 on Thursday evening. The new symptoms are congestion or runny nose, nausea and diarrhea.

Halsey Beshears, secretary of the state’s Department of Business & Professional Regulation, made a surprise announcement via Twitter on Friday that effective immediately, consumption of alcohol at bars statewide has been suspended. See the full story on A2 today.

The first positive case reported in Highlands County was reported on March 21.

The total number of tests administered in Highlands County is 7,391 with 7,101 negative tests results. Six results have come back inconclusive and six are waiting for results. The percent of positive cases is 4%.

Several residents commute to surrounding counties. Just to the north, in Polk County, where there is a higher population, the total reached 2,780 positive cases with 445 hospitalizations and reached 87 deaths. Polk has also administered 40,963 tests, of which 38,169 have come back with negative results.

DeSoto, Hardee and Okeechobee counties have surpassed Highlands County in positive cases while Highlands still has more cases than Glades County. Okeechobee has a total of 307 cases with no deaths; Hardee has 373 cases with three death; DeSoto County has 539 positive cases with 10 deaths and Glades has 154 cases with 1 death. There are many variables that could affect the numbers such as population and testing availability.

Testing for the virus can be done at the Highlands County Health Department on Mondays and Fridays for those who are showing symptoms. Call 863-382-7260 to make an appointment. Testing is also being done at Central Florida Health Department, but again, appointments are required.

Social distancing was observed in the Sebring Middle School Commons at Thursday’s town hall meeting about the reopening of school in August.

It was the last of three town hall meetings this week on the district’s reopening plan for the start of the 2020-21 school year on Aug. 11.

The reopening of school campuses will give students a “routine and predictability,” but things will be different when they return in August, Longshore said.

They are planning to have the graduation ceremonies near the end of July, she said, while continuing to monitor the situation and continuing to follow directives from the governor and the Health Department.

The second parent survey showed that 73% are ready for the children to attend school in August, Longshore said.

She advised that students should stay home if they have a fever or a cold.

“This is not the year for perfect attendance,” Longshore said.

Students who ride a school bus will have there temperatures checked before boarding the bus so parents should be with their child. If a student has a temperature of 100.4 or higher they can’t get on the bus, she said.

It is recommended that students wear a mask while on the bus and for class changes at the secondary level, Longshore said. The district is preparing to use more buses so there can be fewer students on a bus.

The water fountains at schools will not be used so students should bring a water bottle and also hand sanitizer, she said.

All staff and students will have their temperatures checked before they enter the campus except for those who already had it checked as a bus rider.

Lunch times will be staggered so there are fewer students in the cafeteria and each school will utilize available space for outdoor picnic tables or other areas for additional spacing.

Longshore noted there have been a few more cases in the last few days and the district will be ready to adjust its plans and follow the governor’s directives.

For elementary and middle school students the district will have three options for students: attend school with face-to-face instruction with a teacher, full-time remote online learning with the same curriculum with a Highlands County teacher or Highlands Virtual School with the Edgenuity curriculum.

Longshore noted that with full-time remote learning, students would be following a daily class schedule for example logging in on their computer for class at 8 a.m. followed by another class, etc. until the end of the school day.

With Highlands Virtual School students can log in anytime and work at their own pace and on their own schedule.

Due to the many course offerings at the high school level there are two district options: face-to-face instruction or Highlands Virtual School.

Starting Monday, parents will have two weeks to complete an intent form to select the learning option for their children.

The district’s Facebook page and website will have information about the intent form, which will close on July 10.

Longshore said all students will have access to Chromebooks (laptop computers).

The No. 4 Mobil 1/SiriusXM Chevrolet Corvette C8.R races in January’s Rolex 24 At Daytona. Sebring fans will get their first look at the new car during next month’s Cadillac Grand Prix of Sebring.

The No. 5 Mustang Sampling Cadillac DPi-V.R races at Sebring International Raceway. The car is one of several Cadillacs trying to capture the overall win in next month’s Cadillac Grand Prix of Sebring.

SEBRING — For local race fans it literally is Christmas in July, as Sebring International Raceway announced that a limited number of Florida fans will be allowed to attend next month’s Cadillac Grand Prix of Sebring. But there are going to be some strict safety guidelines in place for those who do attend.

Tickets will go on sale Wednesday at noon and must be purchased in advance. RV passes are for Friday and Saturday, July 17-18, while spectator tickets are for Saturday only. RVs can have a maximum of six people and tickets begin at $230 for two people and increase to $310 and $390 depending on the number of people. Saturday’s spectator tickets are $40 and children 15 and under are permitted free with a paying adult.

IMSA and Sebring Raceway have had the opportunity to learn a bit from how NASCAR is doing things and will also get to draw some information from next weekend’s IMSA race at Daytona. The two-day RV pass and one-day ticket for spectators in cars is what NASCAR did for Talladega and how IMSA is handling the July 4 race at Daytona.

Although Sebring Raceway has some unique challenges to conquer what the other tracks may not.

“What makes us different is the absence of reserved grandstand seating,” said Sebring International Raceway President and General Manager Wayne Estes. “At the NASCAR races, guests in grandstands have been required to wear masks in the grandstands, and their seats were assigned to create distances between “family” groups, considered anyone entering in a single vehicle. Our grandstand is our fence line.”

RVs will park in Green Park or Hendricks Field Park, which some people may know better as the flagpole area, while cars will park in the Midway. Fans will be required to undergo a quick medical screening before admission to the track. If one person does not pass the screening/non-contact temperature check, the vehicle will be denied entrance to the track.

Entry to the track will be staggered, with times permitted to enter printed on the tickets, and both cars and RVs must be parked 10 feet away from each other.

Masks will be required when visiting the concession stand or restrooms, where social distancing guidelines will be enforced.

While Sebring International Raceway and IMSA will do everything they can to provide a safe, inviting experience for fans to watch some of the best sportscar racing in the world, it’s a two-way street. They also need fans to do their part in following the guidelines being put into place for the welfare of themselves and their fellow racing enthusiasts.

“Distance and compartmentalization are keys to allowing spectators back into sporting events,” Estes said. “We know there will be some confusion and we will do our best to work with everyone, but it is critical that guests understand their responsibilities to ensure everyone follows protocols so that we can move to the next phase.

“We have three IMSA WeatherTech races in nine months here at Sebring, and we know everyone wants us to continue moving forward. It must be done in steps. Only after completing the current phase do we move to the next phase.”

Tickets will be on sale at sebringraceway.com, where fans will also find a complete list of all the policies and procedures for the Cadillac Grand Prix of Sebring. 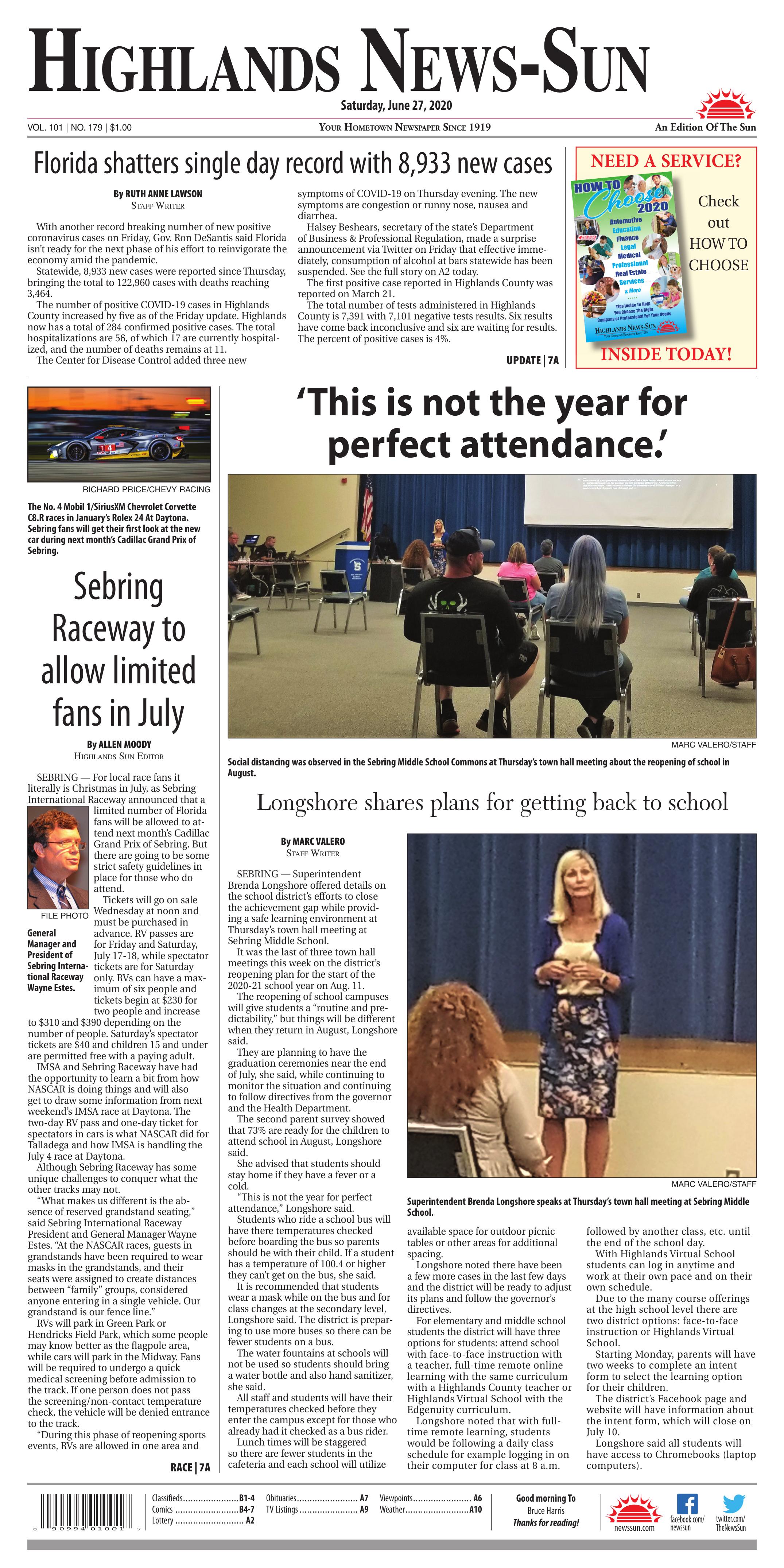