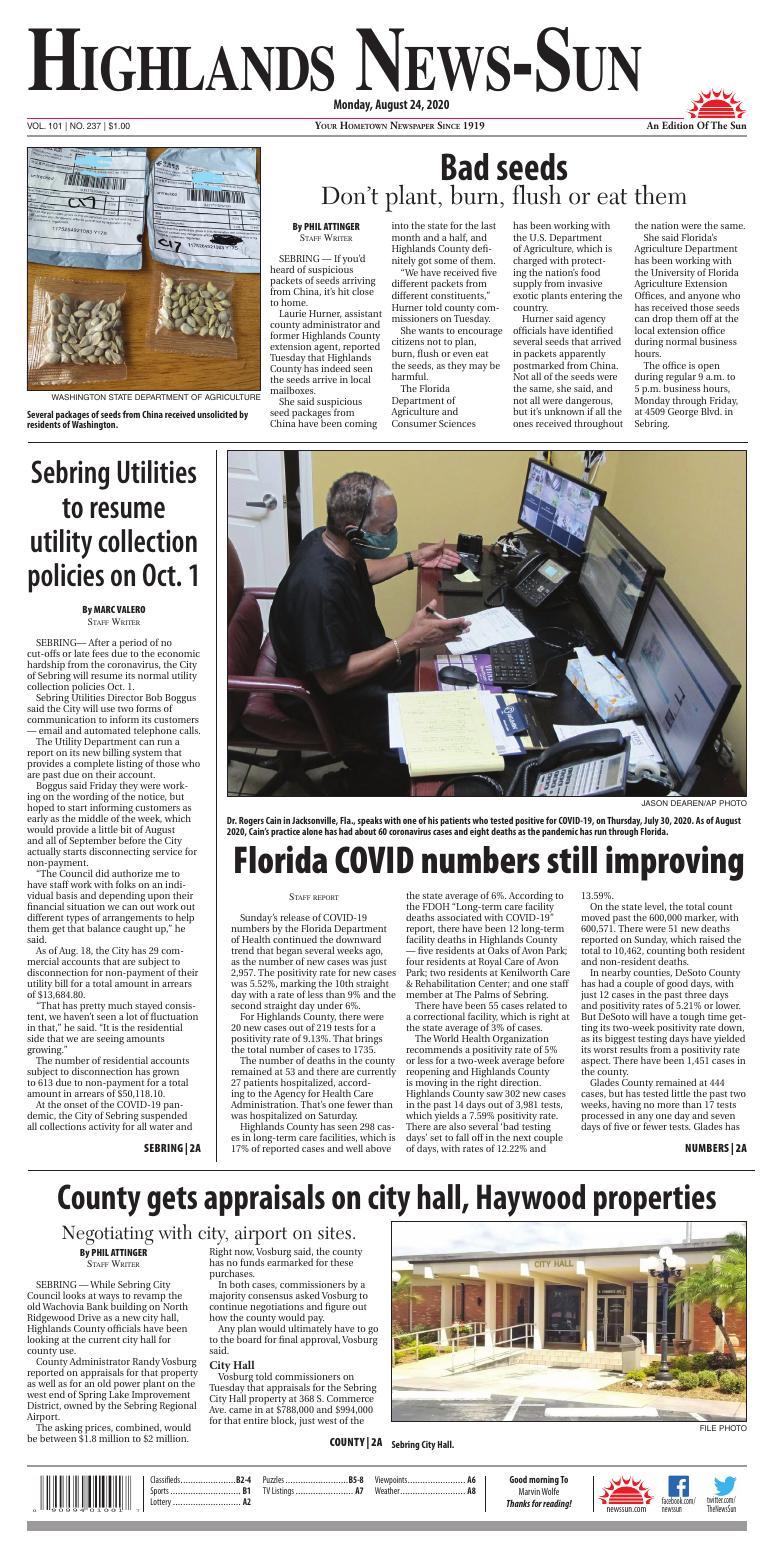 Several packages of seeds from China received unsolicited by residents of Washington.

She said suspicious seed packages from China have been coming into the state for the last month and a half, and Highlands County definitely got some of them.

She wants to encourage citizens not to plan, burn, flush or even eat the seeds, as they may be harmful.

Hurner said agency officials have identified several seeds that arrived in packets apparently postmarked from China. Not all of the seeds were the same, she said, and not all were dangerous, but it’s unknown if all the ones received throughout the nation were the same.

She said Florida’s Agriculture Department has been working with the University of Florida Agriculture Extension Offices, and anyone who has received those seeds can drop them off at the local extension office during normal business hours.

The office is open during regular 9 a.m. to 5 p.m. business hours, Monday through Friday, at 4509 George Blvd. in Sebring.

Dr. Rogers Cain in Jacksonville, Fla., speaks with one of his patients who tested positive for COVID-19, on Thursday, July 30, 2020. As of August 2020, Cain’s practice alone has had about 60 coronavirus cases and eight deaths as the pandemic has run through Florida.

Sunday’s release of COVID-19 numbers by the Florida Department of Health continued the downward trend that began several weeks ago, as the number of new cases was just 2,957. The positivity rate for new cases was 5.52%, marking the 10th straight day with a rate of less than 9% and the second straight day under 6%.

The number of deaths in the county remained at 53 and there are currently 27 patients hospitalized, according to the Agency for Health Care Administration. That’s one fewer than was hospitalized on Saturday.

Highlands County has seen 298 cases in long-term care facilities, which is 17% of reported cases and well above the state average of 6%. According to the FDOH “Long-term care facility deaths associated with COVID-19” report, there have been 12 long-term facility deaths in Highlands County — five residents at Oaks of Avon Park; four residents at Royal Care of Avon Park; two residents at Kenilworth Care & Rehabilitation Center; and one staff member at The Palms of Sebring.

There have been 55 cases related to a correctional facility, which is right at the state average of 3% of cases.

The World Health Organization recommends a positivity rate of 5% or less for a two-week average before reopening and Highlands County is moving in the right direction. Highlands County saw 302 new cases in the past 14 days out of 3,981 tests, which yields a 7.59% positivity rate. There are also several ‘bad testing days’ set to fall off in the next couple of days, with rates of 12.22% and 13.59%.

On the state level, the total count moved past the 600,000 marker, with 600,571. There were 51 new deaths reported on Sunday, which raised the total to 10,462, counting both resident and non-resident deaths.

In nearby counties, DeSoto County has had a couple of good days, with just 12 cases in the past three days and positivity rates of 5.21% or lower. But DeSoto will have a tough time getting its two-week positivity rate down, as its biggest testing days have yielded its worst results from a positivity rate aspect. There have been 1,451 cases in the county.

Glades County remained at 444 cases, but has tested little the past two weeks, having no more than 17 tests processed in any one day and seven days of five or fewer tests. Glades has seen positivity rates of 33% or higher in seven of the last 14 days.

Hardee County saw eight more cases and has a total of 1,059, while Okeechobee had an increase of 11 cases. The positivity rate for those 11 cases was 11.96%, which ended a run of nine straight days with a positivity rate of 4.79% or lower.

Nationally, there have been 5.67 million cases and 176,489 deaths, according to the Johns Hopkins University Center for Systems Science and Engineering.

SEBRING — While Sebring City Council looks at ways to revamp the old Wachovia Bank building on North Ridgewood Drive as a new city hall, Highlands County officials have been looking at the current city hall for county use.

County Administrator Randy Vosburg reported on appraisals for that property as well as for an old power plant on the west end of Spring Lake Improvement District, owned by the Sebring Regional Airport.

The asking prices, combined, would be between $1.8 million to $2 million. Right now, Vosburg said, the county has no funds earmarked for these purchases.

In both cases, commissioners by a majority consensus asked Vosburg to continue negotiations and figure out how the county would pay.

Any plan would ultimately have to go to the board for final approval, Vosburg said.

Vosburg told commissioners on Tuesday that appraisals for the Sebring City Hall property at 368 S. Commerce Ave. came in at $788,000 and $994,000 for that entire block, just west of the Highlands County Courthouse.

Vosburg said he has no specific ideas for use of that property, for now, but that could change in the future.

County government may need to expand a constitutional office, board department, court office or parking, he said.

“As you said, they’re not making any more property in this area,” Commissioner Jim Brooks said. “It’s an opportunity for future needs.”

He said there had been talk in the past of moving the Florida Department of Health offices back from George Boulevard to Commerce Avenue, as well as putting other offices downtown.

“I’m not saying let’s jump out and buy it, but I am saying we ought to look at the potential to buy it,” Brooks said.

Commission Chair Ron Handley agreed with the county getting the city hall, but advised they ignore the appraisals and offer $800,000 for it.

Vosburg said, if the city stands firm, the county might be able to ask the city to include the Stepping Stones Girl Scout House, an original log cabin structure from the 1930s that has been condemned due to termite damage.

The site is on the corner of the Government Center just east of the Courthouse, and has been eyed by county officials for years for expanded parking.

“We could throw that into the mix,” Vosburg said.

“If we want to build anything else, we’re going to have to go outside the city, so what do we need that property for, anyhow,” Commissioner Arlene Tuck asked.

Brooks said he could remember when practically every county government office, from the Clerk of Courts, the Property Appraiser and the Board of County Commission departments were housed in the courthouse.

“The county commission used to meet over there,” Brooks said. “You can’t say we’re never going to need it, because look at what’s happened in the last 40 years, even the last 10 years.”

“The other thing is we don’t have any money to buy it,” Tuck said.

“That don’t mean you can’t look at it,” Brooks replied.

Vosburg said county officials could put together a funding package for it, outlining from which funds the money would come.

“I’m not interested in going out for any kind of loan,” Tuck said.

County officials have looked for a place to have the Gentry Center, and Highlands County Fire Rescue wants to put a station in Spring Lake.

A place for both may be the site of the former power plant on Haywood Taylor Boulevard at the west end of Spring Lake that could give fire engines easy access to the subdivision, Sebring Regional Airport, downtown Sebring via Kenilworth Boulevard and U.S. 98.

In November, Vosburg proposed the site to county commissioners. He said then and said again Tuesday that Sebring Regional Airport is not looking at the property for expansion, so the county would not be bidding against them.

He said Tuesday that the Gentry Center, though cut from the state budget, is still attainable in a future budget cycle, and having a Highlands County Fire Rescue station there would create a “public safety campus” on the 35-acre parcel, to include a helipad and base station for Aeromed helicopters.

However, Vosburg said the asking price is not much over the appraisal, and the county could get the property if it closes quickly, within 45 days.

“We feel this one is pretty close to value,” Vosburg said.

He also said the Sebring Airport Authority is excited about having county facilities there.

“How excited are they?” Handley asked. “I mean, it’s really pretty close to what it’s worth.”

Tuck said she would like to see an animal storm shelter on the property, a facility many people have asked for in the county.

Vosburg said he will be bringing a project to the board in early September on a remodeling project for the Animal Control facility across the road, to have pet shelters there, but said he would explore options.

“We’d have to look at the funding packages that would be available,” Vosburg said.

SEBRING— After a period of no cut-offs or late fees due to the economic hardship from the coronavirus, the City of Sebring will resume its normal utility collection policies Oct. 1.

Sebring Utilities Director Bob Boggus said the City will use two forms of communication to inform its customers — email and automated telephone calls.

The Utility Department can run a report on its new billing system that provides a complete listing of those who are past due on their account.

Boggus said Friday they were working on the wording of the notice, but hoped to start informing customers as early as the middle of the week, which would provide a little bit of August and all of September before the City actually starts disconnecting service for non-payment.

“The Council did authorize me to have staff work with folks on an individual basis and depending upon their financial situation we can out work out different types of arrangements to help them get that balance caught up,” he said.

As of Aug. 18, the City has 29 commercial accounts that are subject to disconnection for non-payment of their utility bill for a total amount in arrears of $13,684.80.

“That has pretty much stayed consistent, we haven’t seen a lot of fluctuation in that,” he said. “It is the residential side that we are seeing amounts growing.”

The number of residential accounts subject to disconnection has grown to 613 due to non-payment for a total amount in arrears of $50,118.10.

At the onset of the COVID-19 pandemic, the City of Sebring suspended all collections activity for all water and sewer customers. With this suspension, no utilities customer has been charged a late payment penalty or has experienced an interruption of service due to nonpayment, according to the July 7 City Council agenda. 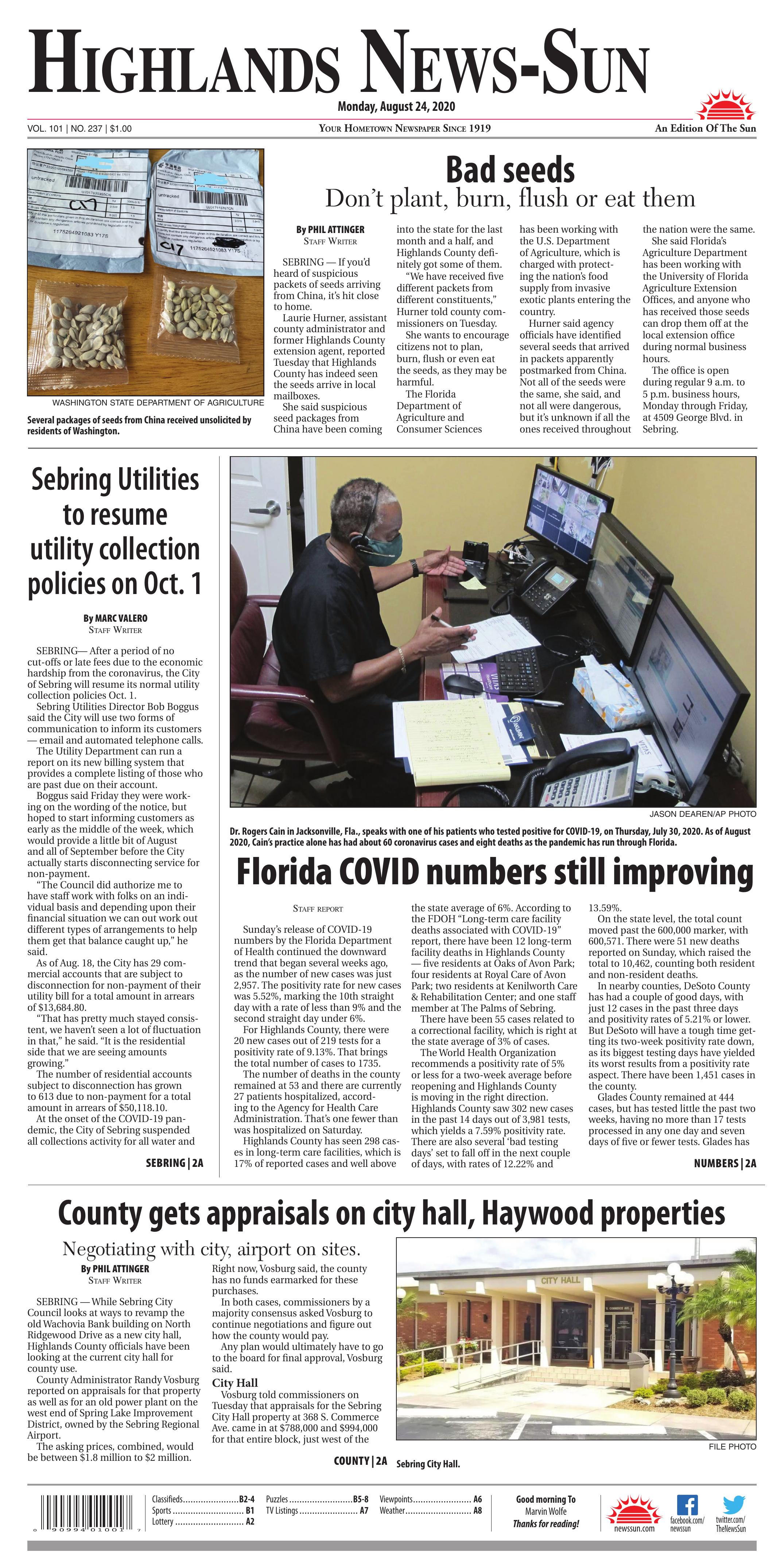