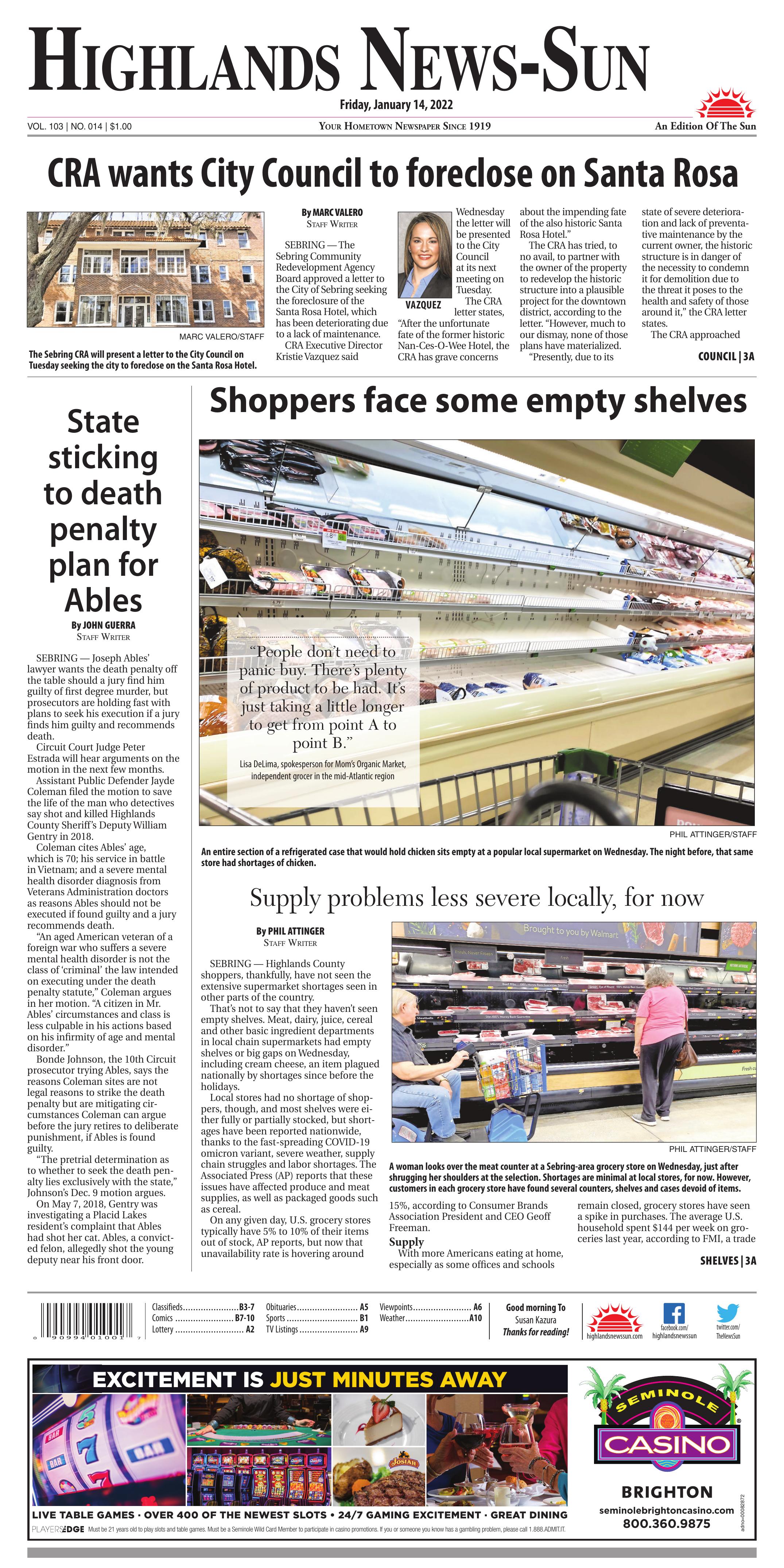 The Sebring CRA will present a letter to the City Council on Tuesday seeking the city to foreclose on the Santa Rosa Hotel.

SEBRING — The Sebring Community Redevelopment Agency Board approved a letter to the City of Sebring seeking the foreclosure of the Santa Rosa Hotel, which has been deteriorating due to a lack of maintenance.

CRA Executive Director Kristie Vazquez said Wednesday the letter will be presented to the City Council at its next meeting on Tuesday.

The CRA letter states, “After the unfortunate fate of the former historic Nan-Ces-O-Wee Hotel, the CRA has grave concerns about the impending fate of the also historic Santa Rosa Hotel.”

The CRA has tried, to no avail, to partner with the owner of the property to redevelop the historic structure into a plausible project for the downtown district, according to the letter. “However, much to our dismay, none of those plans have materialized.

“Presently, due to its state of severe deterioration and lack of preventative maintenance by the current owner, the historic structure is in danger of the necessity to condemn it for demolition due to the threat it poses to the health and safety of those around it,” the CRA letter states.

The CRA approached the current owner offering to receive the property at no cost in an attempt to intercede and change the course of its fate, but with the caveat that the transfer of ownership needed to take place prior to the end of the calendar year on Dec. 31, 2021. Unfortunately, that offer was declined, the CRA noted in its letter.

“In light of the owner’s poor maintenance of the structure and refusal to gift the property to the CRA, the CRA Board is requesting that the City of Sebring City Council foreclose on the property’s nearly $400,000 lien for accruing daily code violations,” the letter states.

“The CRA would like to urge the City Council to take any action afforded you to save this piece of history from being lost forever,” the letter stated in conclusion.

The current owners of the Santa Rosa Hotel – SanRosa Holdings, LLC, Anthony Collins and David Lyons – purchased it in 2015 for $155,000.

Collins was the owner of the Nan-Ces-O-Wee Hotel, which fell into serious disrepair prompting a notice from the City of Sebring on July 21, 2020 stating that the structure needed to be repaired or demolished.

The CRA was awarded a $25,000 grant that covered some of the expenses of the Nan-Ces-O-Wee demolition.

A woman looks over the meat counter at a Sebring-area grocery store on Wednesday, just after shrugging her shoulders at the selection. Shortages are minimal at local stores, for now. However, customers in each grocery store have found several counters, shelves and cases devoid of items.

An entire section of a refrigerated case that would hold chicken sits empty at a popular local supermarket on Wednesday. The night before, that same store had shortages of chicken.

A fresh juice case at a local supermarket on Wednesday afternoon shows plenty of product, but also lots of empty space which would usually be filled with more bottles and cartons, a sign of shortages felt all over the country.

A frozen meat case on Wednesday at a local supermarket has a few items and a lot of space. Staff members at the store had rolling carts to restock refrigerated meats, especially beef, but some of the freezer items had not yet returned to the bins.

SEBRING — Highlands County shoppers, thankfully, have not seen the extensive supermarket shortages seen in other parts of the country.

That’s not to say that they haven’t seen empty shelves. Meat, dairy, juice, cereal and other basic ingredient departments in local chain supermarkets had empty shelves or big gaps on Wednesday, including cream cheese, an item plagued nationally by shortages since before the holidays.

Local stores had no shortage of shoppers, though, and most shelves were either fully or partially stocked, but shortages have been reported nationwide, thanks to the fast-spreading COVID-19 omicron variant, severe weather, supply chain struggles and labor shortages. The Associated Press (AP) reports that these issues have affected produce and meat supplies, as well as packaged goods such as cereal.

On any given day, U.S. grocery stores typically have 5% to 10% of their items out of stock, AP reports, but now that unavailability rate is hovering around 15%, according to Consumer Brands Association President and CEO Geoff Freeman.

SupplyWith more Americans eating at home, especially as some offices and schools remain closed, grocery stores have seen a spike in purchases. The average U.S. household spent $144 per week on groceries last year, according to FMI, a trade organization for grocery stores and food producers. That was down from $161 in 2020, AP reports, but far above the $113.50 per week spent in 2019.

The national deficit of truck drivers, which started before the pandemic, reached 80,000 drivers in October, according to the American Trucking Associations. Shipping remains delayed, AP reports, affecting everything from imported foods to printed packaging.

Retailers and food producers started adjusting in early 2020 to panic buying at the start of the pandemic, AP reported, and have since kept better supplies on hand for items like toilet paper, to avoid acute shortages. Jessica Dankert, vice president of supply chain at the Retail Industry Leaders Association, a trade group, said all of the players in the chain can navigate basic fluctuations, but additional complications have stacked up.

Meanwhile, Stew Leonard Jr., president and CEO of Stew Leonard’s supermarket chain in Connecticut, New York and New Jersey, said that 8% of his workers — 200 people — were either out sick or in quarantine last week.

Typical absenteeism is more like 2%, Leonard said, but he’s getting shipments on time, and believes the worst of the pandemic may be over.

Fire and iceSnowstorms in the Northeast and wildfires in Colorado have cut product availability and caused some shoppers to stock up more than usual. Lisa DeLima, a spokesperson for Mom’s Organic Market, an independent grocer in the mid-Atlantic region, said weather halts last weekend’s resupply shipments to her stores last weekend, but said that bottleneck has since been resolved and don’t compare to shortages at the beginning of the pandemic.

“People don’t need to panic buy,” DeLima said. “There’s plenty of product to be had. It’s just taking a little longer to get from point A to point B.”

"People don't need to panic buy. There's plenty of product to be had. It's just taking a little longer to get from point A to point B."

SEBRING — Joseph Ables’ lawyer wants the death penalty off the table should a jury find him guilty of first degree murder, but prosecutors are holding fast with plans to seek his execution if a jury finds him guilty and recommends death.

Circuit Court Judge Peter Estrada will hear arguments on the motion in the next few months.

Assistant Public Defender Jayde Coleman filed the motion to save the life of the man who detectives say shot and killed Highlands County Sheriff’s Deputy William Gentry in 2018.

Coleman cites Ables’ age, which is 70; his service in battle in Vietnam; and a severe mental health disorder diagnosis from Veterans Administration doctors as reasons Ables should not be executed if found guilty and a jury recommends death.

“An aged American veteran of a foreign war who suffers a severe mental health disorder is not the class of ‘criminal’ the law intended on executing under the death penalty statute,” Coleman argues in her motion. “A citizen in Mr. Ables’ circumstances and class is less culpable in his actions based on his infirmity of age and mental disorder.”

Bonde Johnson, the 10th Circuit prosecutor trying Ables, says the reasons Coleman sites are not legal reasons to strike the death penalty but are mitigating circumstances Coleman can argue before the jury retires to deliberate punishment, if Ables is found guilty.

“The pretrial determination as to whether to seek the death penalty lies exclusively with the state,” Johnson’s Dec. 9 motion argues.

On May 7, 2018, Gentry was investigating a Placid Lakes resident’s complaint that Ables had shot her cat. Ables, a convicted felon, allegedly shot the young deputy near his front door.