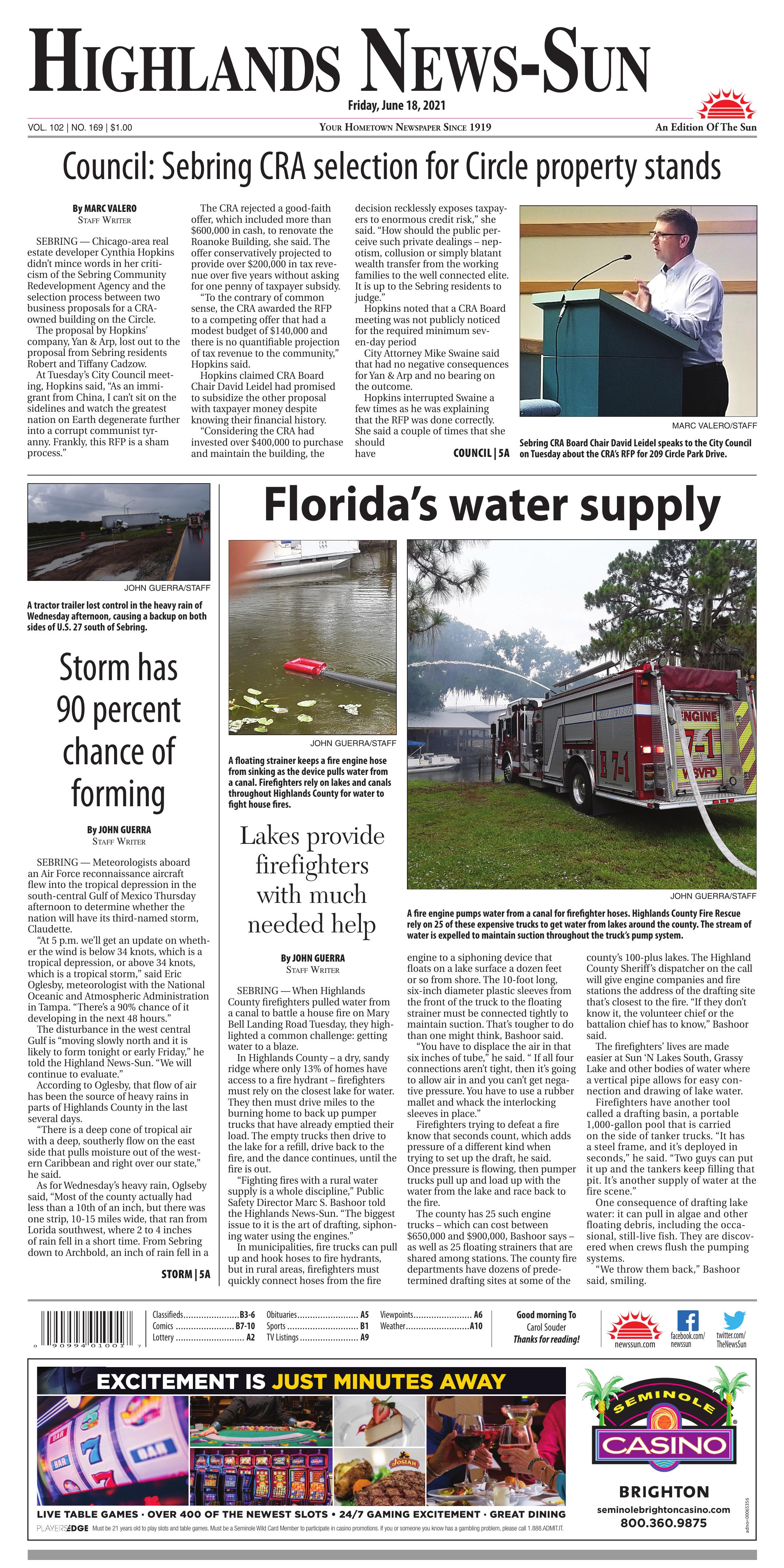 Sebring CRA Board Chair David Leidel speaks to the City Council on Tuesday about the CRA’s RFP for 209 Circle Park Drive.

Cynthia Hopkins (center) sits with the audience after speaking to the Sebring City Council on Tuesday.

SEBRING — Chicago-area real estate developer Cynthia Hopkins didn’t mince words in her criticism of the Sebring Community Redevelopment Agency and the selection process between two business proposals for a CRA-owned building on the Circle.

The proposal by Hopkins’ company, Yan & Arp, lost out to the proposal from Sebring residents Robert and Tiffany Cadzow.

At Tuesday’s City Council meeting, Hopkins said, “As an immigrant from China, I can’t sit on the sidelines and watch the greatest nation on Earth degenerate further into a corrupt communist tyranny. Frankly, this RFP is a sham process.”

The CRA rejected a good-faith offer, which included more than $600,000 in cash, to renovate the Roanoke Building, she said. The offer conservatively projected to provide over $200,000 in tax revenue over five years without asking for one penny of taxpayer subsidy.

“To the contrary of common sense, the CRA awarded the RFP to a competing offer that had a modest budget of $140,000 and there is no quantifiable projection of tax revenue to the community,” Hopkins said.

Hopkins claimed CRA Board Chair David Leidel had promised to subsidize the other proposal with taxpayer money despite knowing their financial history.

“Considering the CRA had invested over $400,000 to purchase and maintain the building, the decision recklessly exposes taxpayers to enormous credit risk,” she said. “How should the public perceive such private dealings – nepotism, collusion or simply blatant wealth transfer from the working families to the well connected elite. It is up to the Sebring residents to judge.”

City Attorney Mike Swaine said that had no negative consequences for Yan & Arp and no bearing on the outcome.

Hopkins interrupted Swaine a few times as he was explaining that the RFP was done correctly. She said a couple of times that she should have brought her lawyer.

Councilman Tom Dettman suggested redoing the RFP to “clean it up.”

Leidel said the CRA did not want to put it out to bid again.

“We did not do anything wrong; we did not interfere with the process,” he said. “The committee met, reviewed the proposals that were submitted and for very specific reasons chose one project over the other.”

This is their home and they have been serving food, drinks and entertainment to Sebring for over 20 years, she said. Their formula is just hard work.

“We are the creators of unique businesses,” Cadzow said. “The same will be for this space (209 Circle Park Drive). It will not just be another drinking place. That is simply not what we do.”

She feels very supportive by the community, some of which were present at the council meeting to support them and their project, Cadzow said.

There was applause when Cadzow finished her statement to the council.

The downtown business owners who spoke in support of Cadzow included: Dan Andrews, Jeff Carlson and Don Davies, whose business proposal for 301 Circle Park Drive was selected by the CRA.

Dettman repeatedly asked Hopkins if she would submit a proposal if the RFP process was redone. She didn’t immediately provide an answer, but then said her company was no longer interested in Sebring.

Council agreed that if the RFP was redone it would provide an advantage to anyone who would submit because they would already know what they would be competing against (the Cadzow proposal). Also, it would delay the start of the Cadzows’ project in the building.

Council voted unanimously to deny the appeal by Hopkins and her company, Yan & Arp.

A floating strainer keeps a fire engine hose from sinking as the device pulls water from a canal. Firefighters rely on lakes and canals throughout Highlands County for water to fight house fires.

A fire engine pumps water from a canal for firefighter hoses. Highlands County Fire Rescue rely on 25 of these expensive trucks to get water from lakes around the county. The stream of water is expelled to maintain suction throughout the truck’s pump system.

SEBRING — When Highlands County firefighters pulled water from a canal to battle a house fire on Mary Bell Landing Road Tuesday, they highlighted a common challenge: getting water to a blaze.

In Highlands County – a dry, sandy ridge where only 13% of homes have access to a fire hydrant – firefighters must rely on the closest lake for water. They then must drive miles to the burning home to back up pumper trucks that have already emptied their load. The empty trucks then drive to the lake for a refill, drive back to the fire, and the dance continues, until the fire is out.

“Fighting fires with a rural water supply is a whole discipline,” Public Safety Director Marc S. Bashoor told the Highlands News-Sun. “The biggest issue to it is the art of drafting, siphoning water using the engines.”

In municipalities, fire trucks can pull up and hook hoses to fire hydrants, but in rural areas, firefighters must quickly connect hoses from the fire engine to a siphoning device that floats on a lake surface a dozen feet or so from shore. The 10-foot long, six-inch diameter plastic sleeves from the front of the truck to the floating strainer must be connected tightly to maintain suction. That’s tougher to do than one might think, Bashoor said.

“You have to displace the air in that six inches of tube,” he said. “ If all four connections aren’t tight, then it’s going to allow air in and you can’t get negative pressure. You have to use a rubber mallet and whack the interlocking sleeves in place.”

Firefighters trying to defeat a fire know that seconds count, which adds pressure of a different kind when trying to set up the draft, he said. Once pressure is flowing, then pumper trucks pull up and load up with the water from the lake and race back to the fire.

The county has 25 such engine trucks – which can cost between $650,000 and $900,000, Bashoor says – as well as 25 floating strainers that are shared among stations. The county fire departments have dozens of predetermined drafting sites at some of the county’s 100-plus lakes. The Highland County Sheriff’s dispatcher on the call will give engine companies and fire stations the address of the drafting site that’s closest to the fire. “If they don’t know it, the volunteer chief or the battalion chief has to know,” Bashoor said.

The firefighters’ lives are made easier at Sun ‘N Lakes South, Grassy Lake and other bodies of water where a vertical pipe allows for easy connection and drawing of lake water.

Firefighters have another tool called a drafting basin, a portable 1,000-gallon pool that is carried on the side of tanker trucks. “It has a steel frame, and it’s deployed in seconds,” he said. “Two guys can put it up and the tankers keep filling that pit. It’s another supply of water at the fire scene.”

One consequence of drafting lake water: it can pull in algae and other floating debris, including the occasional, still-live fish. They are discovered when crews flush the pumping systems.

“We throw them back,” Bashoor said, smiling.

A tractor trailer lost control in the heavy rain of Wednesday afternoon, causing a backup on both sides of U.S. 27 south of Sebring.

SEBRING — Meteorologists aboard an Air Force reconnaissance aircraft flew into the tropical depression in the south-central Gulf of Mexico Thursday afternoon to determine whether the nation will have its third-named storm, Claudette.

The disturbance in the west central Gulf is “moving slowly north and it is likely to form tonight or early Friday,” he told the Highland News-Sun. “We will continue to evaluate.”

According to Oglesby, that flow of air has been the source of heavy rains in parts of Highlands County in the last several days.

“There is a deep cone of tropical air with a deep, southerly flow on the east side that pulls moisture out of the western Caribbean and right over our state,” he said.

The heavy rain caused fender benders around the Sebring area Wednesday, including a tractor trailer jack-knife on U.S. 27. The accident created a traffic backup on both sides of U.S. 27 north of Lake Placid.

“It doesn’t surprise me that there would be traffic accidents,” Oglesby said. “Heavy rain can cause dangerous road conditions.”

The present forecast for the county does not indicate high winds or storm conditions, but that could change; rather, the area will continue to see scattered to numerous showers, as well as locally heavy afternoon rain and thunder showers. Rain chances increase from 10% on Friday to 60% on Saturday through Tuesday, and 80% chance of rain on Thursday next week.

Though this year’s hurricane season may not be as busy as past years, what’s important is “that one named storm that’s aimed at you,” Oglesby said.