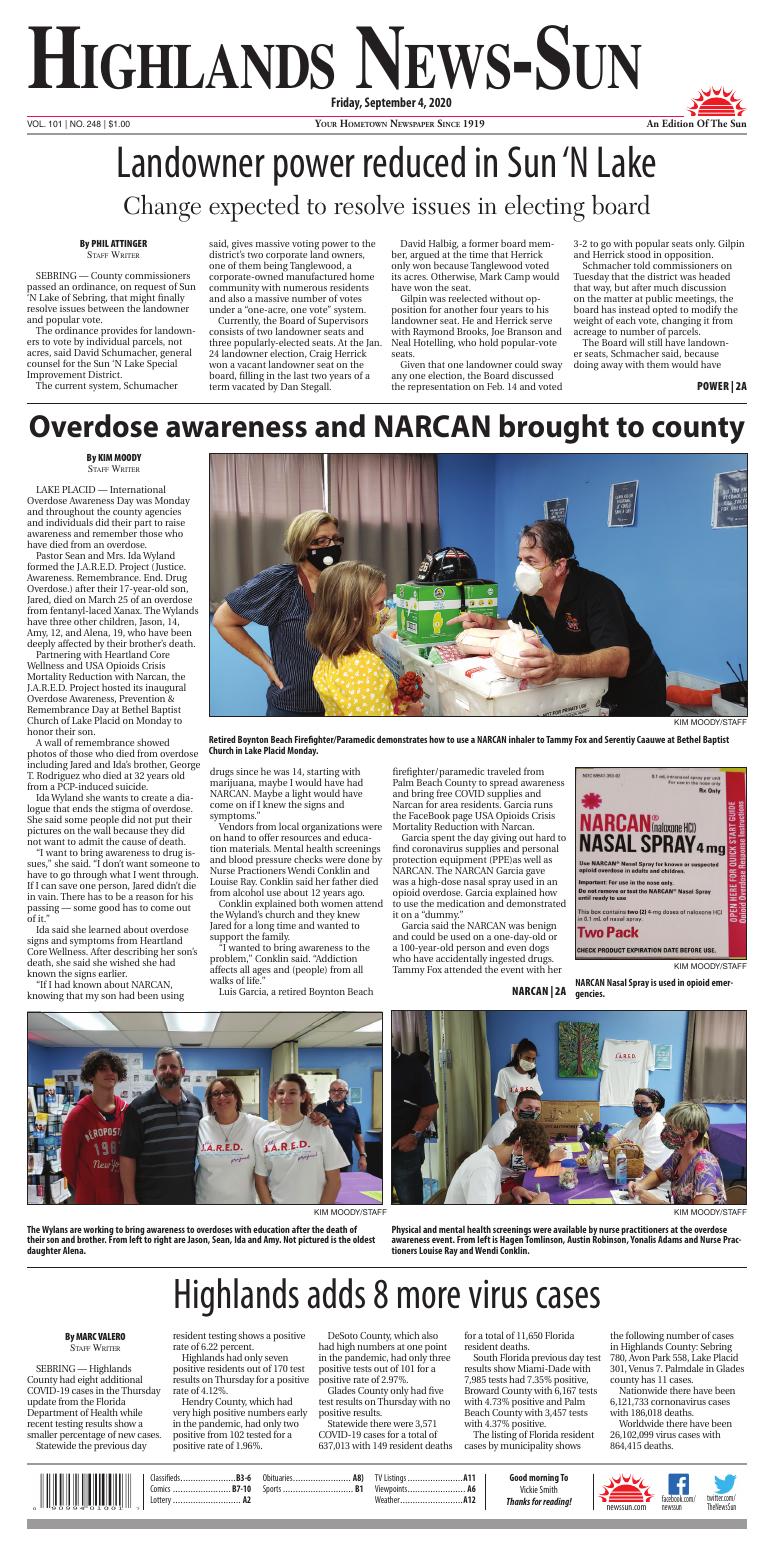 SEBRING — County commissioners passed an ordinance, on request of Sun ‘N Lake of Sebring, that might finally resolve issues between the landowner and popular vote.

The current system, Schumacher said, gives massive voting power to the district’s two corporate land owners, one of them being Tanglewood, a corporate-owned manufactured home community with numerous residents and also a massive number of votes under a “one-acre, one vote” system.

Currently, the Board of Supervisors consists of two landowner seats and three popularly-elected seats. At the Jan. 24 landowner election, Craig Herrick won a vacant landowner seat on the board, filling in the last two years of a term vacated by Dan Stegall.

David Halbig, a former board member, argued at the time that Herrick only won because Tanglewood voted its acres. Otherwise, Mark Camp would have won the seat.

Gilpin was reelected without opposition for another four years to his landowner seat. He and Herrick serve with Raymond Brooks, Joe Branson and Neal Hotelling, who hold popular-vote seats.

Given that one landowner could sway any one election, the Board discussed the representation on Feb. 14 and voted 3-2 to go with popular seats only. Gilpin and Herrick stood in opposition.

Schmacher told commissioners on Tuesday that the district was headed that way, but after much discussion on the matter at public meetings, the board has instead opted to modify the weight of each vote, changing it from acreage to number of parcels.

The Board will still have landowner seats, Schmacher said, because doing away with them would have disenfranchised certain landowners, such as Canadian citizens who own property there.

At this time, it’s one of the few, if not the only improvement district in Florida that has not converted completely from landowner-elected seats to popularly-elected seats.

“[We’re] unique among districts,” Schumacher said. “We’ve come up with a unique solution.”

He said for each individual land parcel owned by any one landowner, that landowner will get one vote each.

In addition, the ordinance changes how Sun ‘N Lake seats are filled by appointment. At present, if someone has been appointed to a seat, he or she would serve out the rest of the vacating board member’s term.

Under the new ordinance, Schumacher said, any appointed supervisor will have to run for re-election at the next general election.

Commissioner Don Elwell said he knew this had been a “bone of contention for longer than us,” and asked why it had never gotten resolved until now.

“We finally came up with a solution that’s agreeable with everyone, it appears,” Schumacher said.

Commissioner Arlene Tuck asked if a married couple owned a parcel together, if they would each get a vote.

Sherry Sutphen, interim county attorney, told her that would still be just one vote because it’s only one parcel.

The Wylans are working to bring awareness to overdoses with education after the death of their son and brother. From left to right are Jason, Sean, Ida and Amy. Not pictured is the oldest daughter Alena.

Retired Boynton Beach Firefighter/Paramedic demonstrates how to use a NARCAN inhaler to Tammy Fox and Serentiy Caauwe at Bethel Baptist Church in Lake Placid Monday.

LAKE PLACID — International Overdose Awareness Day was Monday and throughout the county agencies and individuals did their part to raise awareness and remember those who have died from an overdose.

Pastor Sean and Mrs. Ida Wyland formed the J.A.R.E.D. Project (Justice. Awareness. Remembrance. End. Drug Overdose.) after their 17-year-old son, Jared, died on March 25 of an overdose from fentanyl-laced Xanax. The Wylands have three other children, Jason, 14, Amy, 12, and Alena, 19, who have been deeply affected by their brother’s death.

A wall of remembrance showed photos of those who died from overdose including Jared and Ida’s brother, George T. Rodriguez who died at 32 years old from a PCP-induced suicide.

Ida Wyland she wants to create a dialogue that ends the stigma of overdose. She said some people did not put their pictures on the wall because they did not want to admit the cause of death.

“I want to bring awareness to drug issues,” she said. “I don’t want someone to have to go through what I went through. If I can save one person, Jared didn’t die in vain. There has to be a reason for his passing — some good has to come out of it.”

Ida said she learned about overdose signs and symptoms from Heartland Core Wellness. After describing her son’s death, she said she wished she had known the signs earlier.

“If I had known about NARCAN, knowing that my son had been using drugs since he was 14, starting with marijuana, maybe I would have had NARCAN. Maybe a light would have come on if I knew the signs and symptoms.”

Vendors from local organizations were on hand to offer resources and education materials. Mental health screenings and blood pressure checks were done by Nurse Practioners Wendi Conklin and Louise Ray. Conklin said her father died from alcohol use about 12 years ago.

Conklin explained both women attend the Wyland’s church and they knew Jared for a long time and wanted to support the family.

“I wanted to bring awareness to the problem,” Conklin said. “Addiction affects all ages and (people) from all walks of life.”

Garcia spent the day giving out hard to find coronavirus supplies and personal protection equipment (PPE)as well as NARCAN. The NARCAN Garcia gave was a high-dose nasal spray used in an opioid overdose. Garcia explained how to use the medication and demonstrated it on a “dummy.”

Garcia said the NARCAN was benign and could be used on a one-day-old or a 100-year-old person and even dogs who have accidentally ingested drugs. Tammy Fox attended the event with her granddaughter, Serenity Caauwe. Fox said she wanted to support Ida Wyland. She also said the kids in Highlands County don’t have much to do and is concerned that is one reason some kids get into drugs.

Garcia started his day at Heartland Core Wellness in Sebring handing out supplies that he generates through donations on his Facebook page. From there, he reached with his supplies out to some of the homeless population near the Sebring Library. He wrapped up the day at Bethel Church.

Garcia started the day with 150 units of NARCAN and gave 103 were given away between the three stops and countless PPE and COVID-19 supplies.

“Every life is worth saving,” Garcia said. “If only one person is safe from certain death, then today was worthwhile.”

SEBRING — Highlands County had eight additional COVID-19 cases in the Thursday update from the Florida Department of Health while recent testing results show a smaller percentage of new cases.

Highlands had only seven positive residents out of 170 test results on Thursday for a positive rate of 4.12%.

Hendry County, which had very high positive numbers early in the pandemic, had only two positive from 102 tested for a positive rate of 1.96%.

DeSoto County, which also had high numbers at one point in the pandemic, had only three positive tests out of 101 for a positive rate of 2.97%.

Glades County only had five test results on Thursday with no positive results. 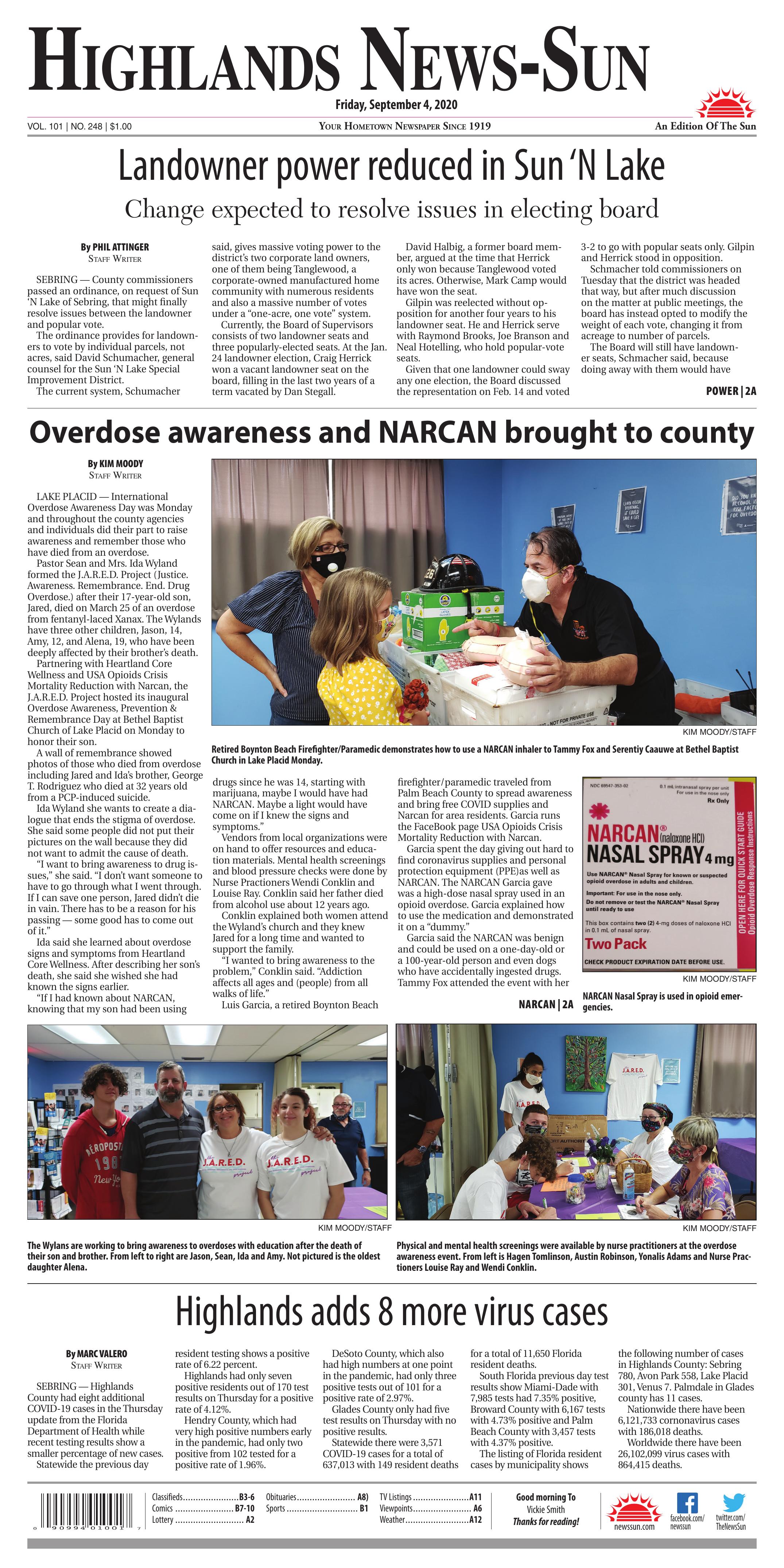