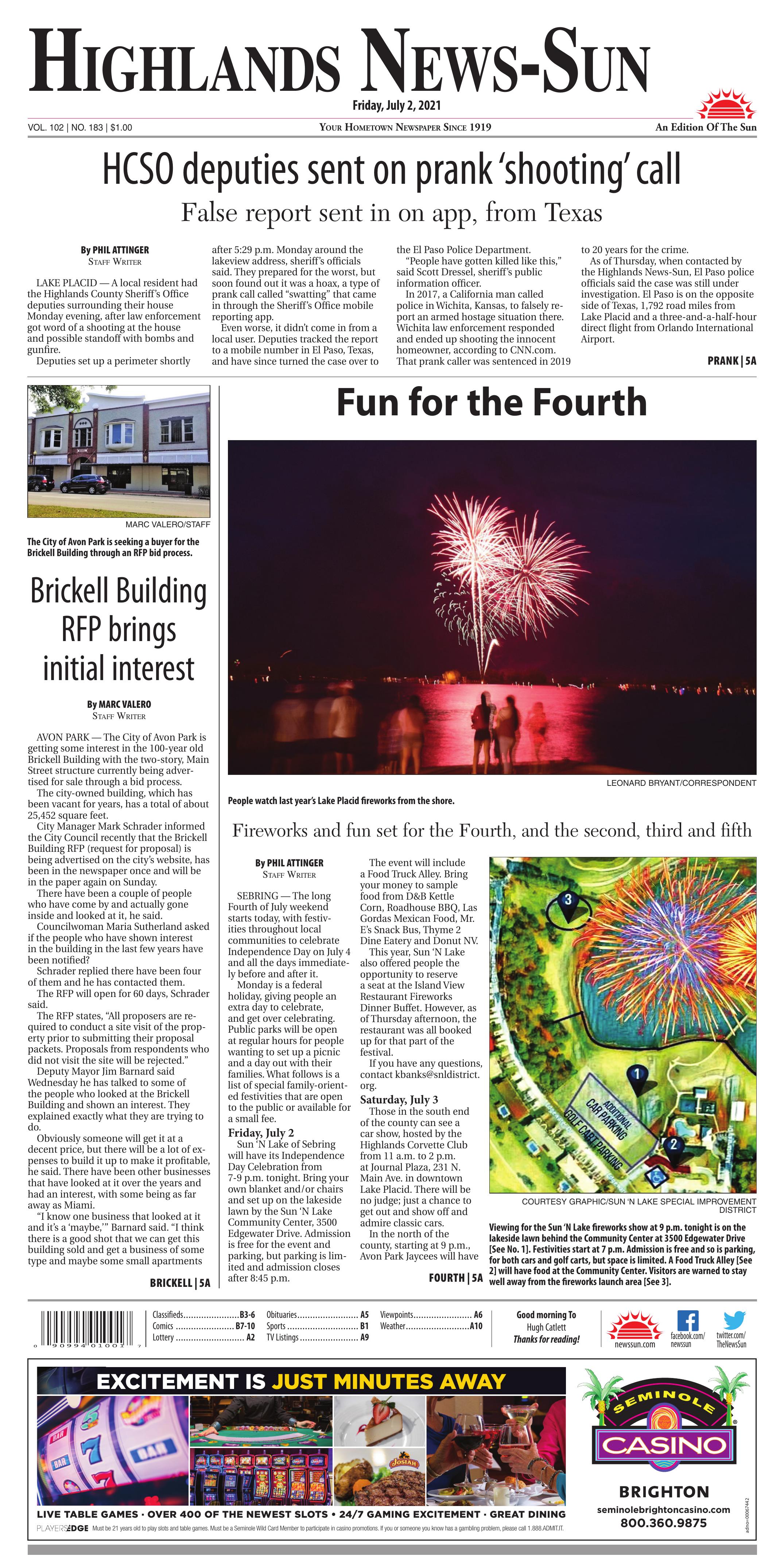 Highlands_news-sun
HCSO sent to on prank 'shooting' call, via app

LAKE PLACID — A local resident had the Highlands County Sheriff’s Office deputies surrounding their house Monday evening, after law enforcement got word of a shooting at the house and possible standoff with bombs and gunfire.

Deputies set up a perimeter shortly after 5:29 p.m. Monday around the lakeview address, sheriff’s officials said. They prepared for the worst, but soon found out it was a hoax, a type of prank call called “swatting” that came in through the Sheriff’s Office mobile reporting app.

Even worse, it didn’t come in from a local user. Deputies tracked the report to a mobile number in El Paso, Texas, and have since turned the case over to the El Paso Police Department.

In 2017, a California man called police in Wichita, Kansas, to falsely report an armed hostage situation there. Wichita law enforcement responded and ended up shooting the innocent homeowner, according to CNN.com. That prank caller was sentenced in 2019 to 20 years for the crime.

As of Thursday, when contacted by the Highlands News-Sun, El Paso police officials said the case was still under investigation. El Paso is on the opposite side of Texas, 1,792 road miles from Lake Placid and a three-and-a-half-hour direct flight from Orlando International Airport.

The Federal Bureau of Investigation first warned about swatting in 2008, with mobile reporting apps now providing a new twist. FBI.gov states that perpetrators use technology to make it appear that an emergency call is coming from a victim’s phone.

“Sometimes swatting is done for revenge, sometimes as a prank. Either way, it is a serious crime, and one that has potentially dangerous consequences,” FBI.gov states. “Since we first warned about this phone hacking phenomenon in 2008, the FBI has arrested numerous individuals on federal charges stemming from swatting incidents, and some are currently in prison.”

Today, most swatting cases are handled by local and state law enforcement agencies with the FBI providing resources and guidance, FBI.gov states.

Highlands County Sheriff’s officials said it has sometimes been associated with online gaming, when one defeated player takes revenge on a winning player by finding the internet protocol address, using that to find a home address and sending police there.

In the Lake Placid case, however, the residents didn’t even have a gaming system in the house, sheriff’s officials said.

On June 4, Gov. Ron DeSantis signed House Bill 371, sponsored by Rep. Robert Brannan III (R-Lake City), to increase penalties for falsely reporting a crime. Under the bill, a person who falsely reports a crime and prompts a police response that leads to a death can face a second-degree felony.

Moreover, a swatting event that leads to “great bodily harm” is now a third-degree felony, and anyone who falsely reports a crime will be responsible for the cost of the response, similar to that of false fire alarms.

Viewing for the Sun ‘N Lake fireworks show at 9 p.m. tonight is on the lakeside lawn behind the Community Center at 3500 Edgewater Drive [See No. 1]. Festivities start at 7 p.m. Admission is free and so is parking, for both cars and golf carts, but space is limited. A Food Truck Alley [See 2] will have food at the Community Center. Visitors are warned to stay well away from the fireworks launch area [See 3].

SEBRING — The long Fourth of July weekend starts today, with festivities throughout local communities to celebrate Independence Day on July 4 and all the days immediately before and after it.

Monday is a federal holiday, giving people an extra day to celebrate, and get over celebrating. Public parks will be open at regular hours for people wanting to set up a picnic and a day out with their families. What follows is a list of special family-oriented festivities that are open to the public or available for a small fee.

Friday, July 2Sun ‘N Lake of Sebring will have its Independence Day Celebration from 7-9 p.m. tonight. Bring your own blanket and/or chairs and set up on the lakeside lawn by the Sun ‘N Lake Community Center, 3500 Edgewater Drive. Admission is free for the event and parking, but parking is limited and admission closes after 8:45 p.m.

This year, Sun ‘N Lake also offered people the opportunity to reserve a seat at the Island View Restaurant Fireworks Dinner Buffet. However, as of Thursday afternoon, the restaurant was all booked up for that part of the festival.

Saturday, July 3Those in the south end of the county can see a car show, hosted by the Highlands Corvette Club from 11 a.m. to 2 p.m. at Journal Plaza, 231 N. Main Ave. in downtown Lake Placid. There will be no judge; just a chance to get out and show off and admire classic cars.

In the north of the county, starting at 9 p.m., Avon Park Jaycees will have its annual fireworks show at Donaldson Park on the shores of Lake Verona, 109 E. Main St.

Sunday, July 4The big day will have festivals during the day and night.

Highlands Little Theatre in Sebring will host its free annual Patriotic Revue, with 30-minute shows on every hour between 11 a.m. and 3 p.m. Sales of hot dogs, bratwurst, chips, beer and soft drinks will benefit the HLT scholarship fund. HLT is located next to the Jack Stroup Civic Center and Museum of the Arts at the Allen Altvater Cultural Center at 356 W. Center Ave.

At 9 p.m., City Pier Beach out behind the Cultural Center will be the site of Sebring’s annual fireworks display over Lake Jackson. Also, at that same time, Lake Placid’s Jaycees will host a fireworks display over Lake June in Winter, visible from H.L. Bishop Park on Lake June Road or from Lake June Park on North Tangerine Drive in Lake Placid. Take your pick. Both shows are expected to last 30-45 minutes and to be spectacular.

All weekendAs always, people will host yard parties for their family and friends this weekend, and may even shoot off some fireworks of their own. With recent rains, the Keetch-Byram Drought Index shows all Florida counties in safe levels, but people should still be cautious with fireworks, barbecue grills and fire pits near dry or wild scrub vegetation.

Also, remember that fireworks will spook dogs, cats and other pets in your neighborhood and might cause some that sleep outside to run off. Please be courteous to them and to neighbors who aren’t celebrating into the late night or early morning hours with loud fireworks and/or music.

The City of Avon Park is seeking a buyer for the Brickell Building through an RFP bid process.

AVON PARK — The City of Avon Park is getting some interest in the 100-year old Brickell Building with the two-story, Main Street structure currently being advertised for sale through a bid process.

The city-owned building, which has been vacant for years, has a total of about 25,452 square feet.

City Manager Mark Schrader informed the City Council recently that the Brickell Building RFP (request for proposal) is being advertised on the city’s website, has been in the newspaper once and will be in the paper again on Sunday.

There have been a couple of people who have come by and actually gone inside and looked at it, he said.

Councilwoman Maria Sutherland asked if the people who have shown interest in the building in the last few years have been notified?

Schrader replied there have been four of them and he has contacted them.

The RFP will open for 60 days, Schrader said.

The RFP states, “All proposers are required to conduct a site visit of the property prior to submitting their proposal packets. Proposals from respondents who did not visit the site will be rejected.”

Deputy Mayor Jim Barnard said Wednesday he has talked to some of the people who looked at the Brickell Building and shown an interest. They explained exactly what they are trying to do.

Obviously someone will get it at a decent price, but there will be a lot of expenses to build it up to make it profitable, he said. There have been other businesses that have looked at it over the years and had an interest, with some being as far away as Miami.

“I know one business that looked at it and it’s a ‘maybe,’” Barnard said. “I think there is a good shot that we can get this building sold and get a business of some type and maybe some small apartments upstairs as well as the fact to put the building on the tax roll to bring some income for the city.

“I think we have a good shot at finding somebody who is willing to invest in it and also bring a nice business downtown,” he said.

The RFP notes that the property has recently been re‐zoned to Planned Unit Development (PUD), to allow up to 10 multi‐family residential units on the second floor, and commercial uses on the first and second floor.

The purpose of the property’s redevelopment is to promote revitalization and to serve as a catalyst for the continued progression of the city’s downtown.

The city’s preference is for a future use to include multi‐family housing, retail shops, lunch/dinner eateries, bakery, coffee shop, sports bar, brewery or tap room, etc., with the overall goal of creating a destination for the community and surrounding areas to live, work, shop, play, and to increase foot traffic in the downtown area.