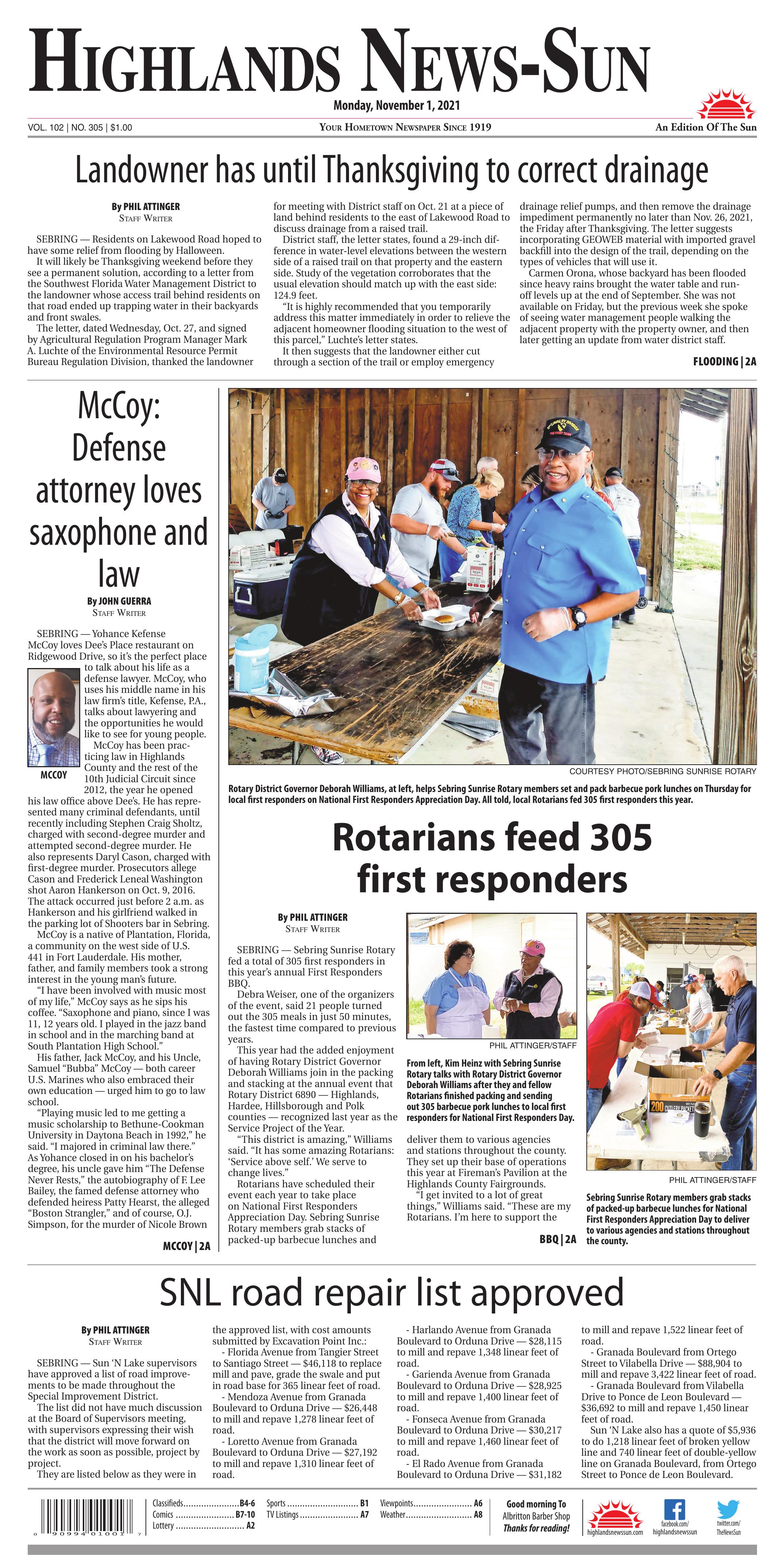 SEBRING — Residents on Lakewood Road hoped to have some relief from flooding by Halloween.

It will likely be Thanksgiving weekend before they see a permanent solution, according to a letter from the Southwest Florida Water Management District to the landowner whose access trail behind residents on that road ended up trapping water in their backyards and front swales.

The letter, dated Wednesday, Oct. 27, and signed by Agricultural Regulation Program Manager Mark A. Luchte of the Environmental Resource Permit Bureau Regulation Division, thanked the landowner for meeting with District staff on Oct. 21 at a piece of land behind residents to the east of Lakewood Road to discuss drainage from a raised trail.

District staff, the letter states, found a 29-inch difference in water-level elevations between the western side of a raised trail on that property and the eastern side. Study of the vegetation corroborates that the usual elevation should match up with the east side: 124.9 feet.

“It is highly recommended that you temporarily address this matter immediately in order to relieve the adjacent homeowner flooding situation to the west of this parcel,” Luchte’s letter states.

It then suggests that the landowner either cut through a section of the trail or employ emergency drainage relief pumps, and then remove the drainage impediment permanently no later than Nov. 26, 2021, the Friday after Thanksgiving. The letter suggests incorporating GEOWEB material with imported gravel backfill into the design of the trail, depending on the types of vehicles that will use it.

Carmen Orona, whose backyard has been flooded since heavy rains brought the water table and runoff levels up at the end of September. She was not available on Friday, but the previous week she spoke of seeing water management people walking the adjacent property with the property owner, and then later getting an update from water district staff.

“The water is down a bit,” Orona said of her backyard, which had attracted waterfowl as early as a couple of weeks after the flooding started. “We still have lots of birds with fish.”

Debra Weiser, one of the organizers of the event, said 21 people turned out the 305 meals in just 50 minutes, the fastest time compared to previous years.

This year had the added enjoyment of having Rotary District Governor Deborah Williams join in the packing and stacking at the annual event that Rotary District 6890 — Highlands, Hardee, Hillsborough and Polk counties — recognized last year as the Service Project of the Year.

“This district is amazing,” Williams said. “It has some amazing Rotarians: ‘Service above self.’ We serve to change lives.”

Rotarians have scheduled their event each year to take place on National First Responders Appreciation Day. Sebring Sunrise Rotary members grab stacks of packed-up barbecue lunches and deliver them to various agencies and stations throughout the county. They set up their base of operations this year at Fireman’s Pavilion at the Highlands County Fairgrounds.

“I get invited to a lot of great things,” Williams said. “These are my Rotarians. I’m here to support the clubs.”

Rotarian Eric T. Zwayer, Highlands County’s tax collector, said he and Rotarian Greg Griffin barbecued 20 pork butts to get the pulled pork for the meals. Each meal had a pulled pork sandwich with potato salad, homemade baked beans and a cookie.

National First Responders Appreciation Day was designated as Oct. 28 in 2017 to recognize the men and women who make it their business to take immediate action when disaster strikes, whether they are firefighters, police, paramedics or others who rush into a dangerous situation to help others.

SEBRING — Sun ‘N Lake supervisors have approved a list of road improvements to be made throughout the Special Improvement District.

The list did not have much discussion at the Board of Supervisors meeting, with supervisors expressing their wish that the district will move forward on the work as soon as possible, project by project.

They are listed below as they were in the approved list, with cost amounts submitted by Excavation Point Inc.:

- Florida Avenue from Tangier Street to Santiago Street — $46,118 to replace mill and pave, grade the swale and put in road base for 365 linear feet of road.

SEBRING — Yohance Kefense McCoy loves Dee’s Place restaurant on Ridgewood Drive, so it’s the perfect place to talk about his life as a defense lawyer. McCoy, who uses his middle name in his law firm’s title, Kefense, P.A., talks about lawyering and the opportunities he would like to see for young people.

McCoy has been practicing law in Highlands County and the rest of the 10th Judicial Circuit since 2012, the year he opened his law office above Dee’s. He has represented many criminal defendants, until recently including Stephen Craig Sholtz, charged with second-degree murder and attempted second-degree murder. He also represents Daryl Cason, charged with first-degree murder. Prosecutors allege Cason and Frederick Leneal Washington shot Aaron Hankerson on Oct. 9, 2016. The attack occurred just before 2 a.m. as Hankerson and his girlfriend walked in the parking lot of Shooters bar in Sebring.

McCoy is a native of Plantation, Florida, a community on the west side of U.S. 441 in Fort Lauderdale. His mother, father, and family members took a strong interest in the young man’s future.

“I have been involved with music most of my life,” McCoy says as he sips his coffee. “Saxophone and piano, since I was 11, 12 years old. I played in the jazz band in school and in the marching band at South Plantation High School.”

His father, Jack McCoy, and his Uncle, Samuel “Bubba” McCoy — both career U.S. Marines who also embraced their own education — urged him to go to law school.

“Playing music led to me getting a music scholarship to Bethune-Cookman University in Daytona Beach in 1992,” he said. “I majored in criminal law there.” As Yohance closed in on his bachelor’s degree, his uncle gave him “The Defense Never Rests,” the autobiography of F. Lee Bailey, the famed defense attorney who defended heiress Patty Hearst, the alleged “Boston Strangler,” and of course, O.J. Simpson, for the murder of Nicole Brown Simpson and Ronald Goldman in June 1994.

“Uncle Bubba got me that book, and he told me, ‘Your dad tells me you are interested in law, here’s wishing you success,” Yohance says, smiling at the memory. “He also told me, ‘I hope this book will inspire you.’ I read the book and it was very inspirational for me in understanding you never stop defending your client throughout the entire process. I go back through it and read it from time to time.”

It must also be noted that McCoy does not employ the theatrics and emotional appeals Bailey and Cochran used while defending Simpson. McCoy arrives prepared for court and communicates clearly with the judge, something a busy Circuit Court Judge Peter Estrada probably appreciates.

“The defense never rests, that’s the approach you take, you approach it all out, you keep looking for ways to protect your client,” says McCoy, who is married with two children. “You make sure you give them the defense they’ve come to you to receive.”

McCoy says he gives his clients who may be facing many years in prison, the truth. “You’re managing a lot of expectations, you want to give your clients a true objective assessment of where they are and what the case presents for them,” he says. “You have to be realistic with your client, just laying it out to them, because no one else around them will.”

Like other defense lawyers, McCoy represents young people growing up with fewer opportunities than their parents.

He would like to see jobs training, technology classes, and other enrichment programs for the children in Sebring, Avon Park, and other parts of Highlands County.

“I think generally, all across America, we have a younger generation that has few opportunities to express themselves,” he says. “I believe in order to help any generation, you have to have community centers, the places they can go and feel safe when they gather.”

He is thankful he had his music.

“When I was coming up there was a place for me to go to learn about music, to help develop my love and interest in music,” he said. “That helped me get to college, I got a music scholarship.”

His clients and other kids he sees have talent, inquisitive minds, interest in social media and Internet technology, but they don’t see a path to reaching their goals.

“We definitely have to something for the youth, to help them out. I think if you give a child an opportunity to develop in the things they love, and an alternative to negativity, they will develop positivity.”