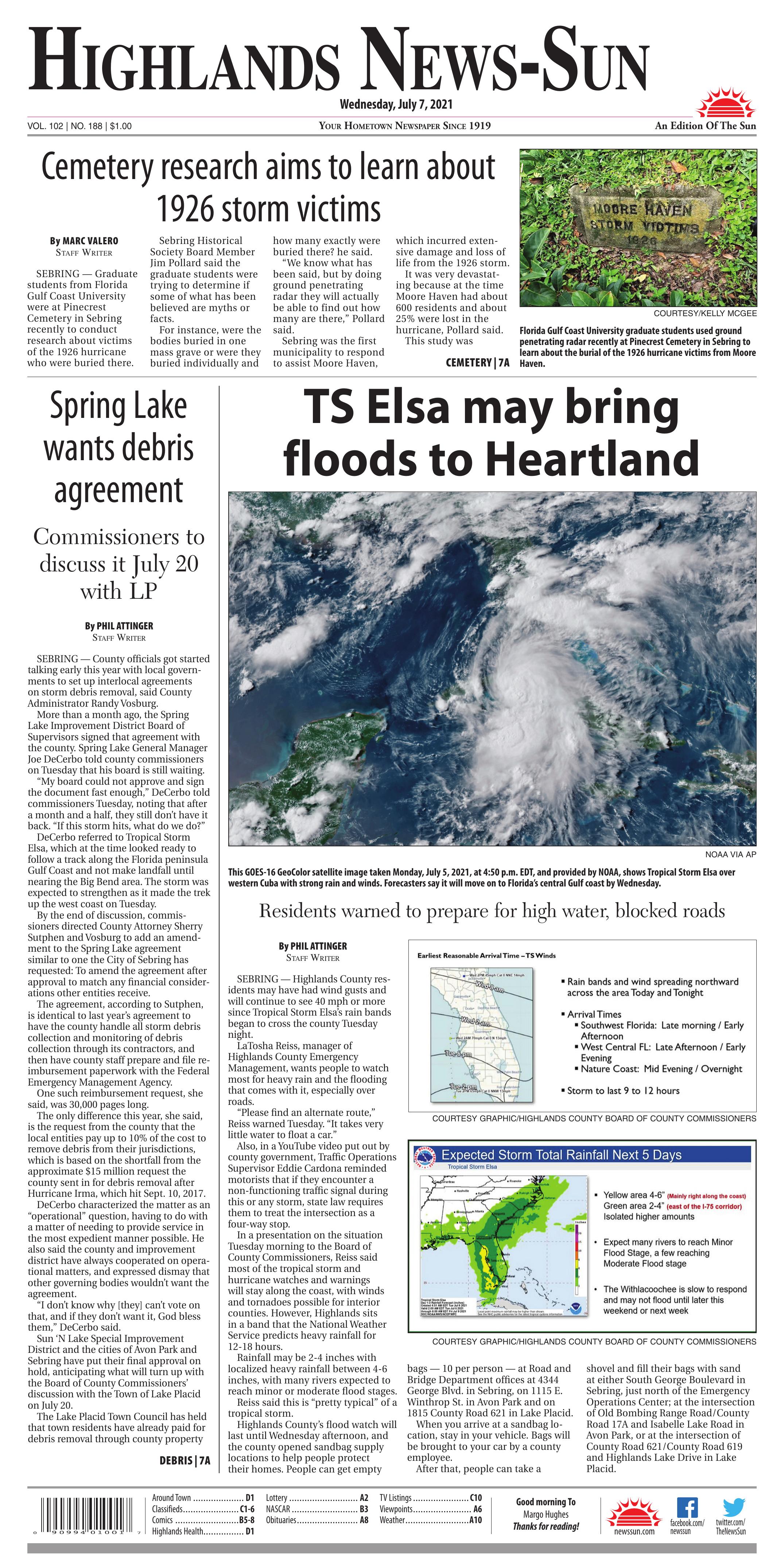 Many victims from Moore Haven of the 1926 hurricane were buried at Pinecrest Cemetery in Sebring where Florida Gulf Coast University graduates have been conducting a study recently to learn more details about the burials and how many were laid to rest.

SEBRING — Graduate students from Florida Gulf Coast University were at Pinecrest Cemetery in Sebring recently to conduct research about victims of the 1926 hurricane who were buried there.

Sebring Historical Society Board Member Jim Pollard said the graduate students were trying to determine if some of what has been believed are myths or facts.

For instance, were the bodies buried in one mass grave or were they buried individually and how many exactly were buried there? he said.

“We know what has been said, but by doing ground penetrating radar they will actually be able to find out how many are there,” Pollard said.

Sebring was the first municipality to respond to assist Moore Haven, which incurred extensive damage and loss of life from the 1926 storm.

It was very devastating because at the time Moore Haven had about 600 residents and about 25% were lost in the hurricane, Pollard said.

This study was prompted by research conducted by South Florida State College students, whose findings were presented at a seminar where some of the professors at Florida Gulf Coast University found very interesting, Pollard noted.

SFSC students Camila Rimoldi Ibanez and Kyria Wickham published their findings in the fall 2020 issue of the “Journal of Multidisciplinary Research.” The research article is titled, “Disaster at Moore Haven: How the 1926 Great Miami Hurricane Destroyed a Small Town on the Shores of Lake Okeechobee.”

Wickham networked while at the Florida Undergraduate Research Conference in February 2020 and met Dr. Donald Duke, an ecology and environmental studies professor from FGCU, who was interested in continuing the research on Moore Haven.

The Florida Gulf Coast University project started earlier, but was suspended during the COVID-19 pandemic and grant funding had to be obtained in order to progress with it, Pollard explained.

“So it has taken longer than we anticipated,” he said. “We ran everything through the proper channels with the city and City Council for approval and have kept them apprised of where we are.

“It is going to be a very interesting project.”

The graduate students were working at the cemetery for several days and then doing research at the Sebring Historical Society.

This GOES-16 GeoColor satellite image taken Monday, July 5, 2021, at 4:50 p.m. EDT, and provided by NOAA, shows Tropical Storm Elsa over western Cuba with strong rain and winds. Forecasters say it will move on to Florida’s central Gulf coast by Wednesday.

SEBRING — Highlands County residents may have had wind gusts and will continue to see 40 mph or more since Tropical Storm Elsa’s rain bands began to cross the county Tuesday night.

LaTosha Reiss, manager of Highlands County Emergency Management, wants people to watch most for heavy rain and the flooding that comes with it, especially over roads.

Also, in a YouTube video put out by county government, Traffic Operations Supervisor Eddie Cardona reminded motorists that if they encounter a non-functioning traffic signal during this or any storm, state law requires them to treat the intersection as a four-way stop.

In a presentation on the situation Tuesday morning to the Board of County Commissioners, Reiss said most of the tropical storm and hurricane watches and warnings will stay along the coast, with winds and tornadoes possible for interior counties. However, Highlands sits in a band that the National Weather Service predicts heavy rainfall for 12-18 hours.

Rainfall may be 2-4 inches with localized heavy rainfall between 4-6 inches, with many rivers expected to reach minor or moderate flood stages.

Reiss said this is “pretty typical” of a tropical storm.

Highlands County’s flood watch will last until Wednesday afternoon, and the county opened sandbag supply locations to help people protect their homes. People can get empty bags — 10 per person — at Road and Bridge Department offices at 4344 George Blvd. in Sebring, on 1115 E. Winthrop St. in Avon Park and on 1815 County Road 621 in Lake Placid.

When you arrive at a sandbag location, stay in your vehicle. Bags will be brought to your car by a county employee.

More than a month ago, the Spring Lake Improvement District Board of Supervisors signed that agreement with the county. Spring Lake General Manager Joe DeCerbo told county commissioners on Tuesday that his board is still waiting.

“My board could not approve and sign the document fast enough,” DeCerbo told commissioners Tuesday, noting that after a month and a half, they still don’t have it back. “If this storm hits, what do we do?”

DeCerbo referred to Tropical Storm Elsa, which at the time looked ready to follow a track along the Florida peninsula Gulf Coast and not make landfall until nearing the Big Bend area. The storm was expected to strengthen as it made the trek up the west coast on Tuesday.

By the end of discussion, commissioners directed County Attorney Sherry Sutphen and Vosburg to add an amendment to the Spring Lake agreement similar to one the City of Sebring has requested: To amend the agreement after approval to match any financial considerations other entities receive.

The agreement, according to Sutphen, is identical to last year’s agreement to have the county handle all storm debris collection and monitoring of debris collection through its contractors, and then have county staff prepare and file reimbursement paperwork with the Federal Emergency Management Agency.

One such reimbursement request, she said, was 30,000 pages long.

The only difference this year, she said, is the request from the county that the local entities pay up to 10% of the cost to remove debris from their jurisdictions, which is based on the shortfall from the approximate $15 million request the county sent in for debris removal after Hurricane Irma, which hit Sept. 10, 2017.

DeCerbo characterized the matter as an “operational” question, having to do with a matter of needing to provide service in the most expedient manner possible. He also said the county and improvement district have always cooperated on operational matters, and expressed dismay that other governing bodies wouldn’t want the agreement.

“I don’t know why [they] can’t vote on that, and if they don’t want it, God bless them,” DeCerbo said.

Sun ‘N Lake Special Improvement District and the cities of Avon Park and Sebring have put their final approval on hold, anticipating what will turn up with the Board of County Commissioners’ discussion with the Town of Lake Placid on July 20.

The Lake Placid Town Council has held that town residents have already paid for debris removal through county property taxes that they pay along with city assessments. Council members have asserted they shouldn’t have to pay the county anything for emergency debris removal.

Council member Ray Royce reiterated after Tuesday’s commission meeting that he and his colleagues see this as a philosophical issue, not operational. To them, it’s a matter of people being charged twice.

DeCerbo said he didn’t want to wait until July 20 for a signed agreement, and also said that if local governments wanted to start “playing the game of what’s fair to everybody,” Spring Lake still needs to have a nearby fire station. Highlands County Fire Rescue has a station in the works for a site on Haywood Taylor Boulevard, just west of Spring Lake, but it’s still a few years out in planning and funding.

“I agree that this [debris agreement] should have been done a year ago,” Commission Chair Scott Kirouac said.

Sutphen said Sebring’s has a clause in its agreement stating that the city would receive the same financial considerations as any other entity, if those were to change in others’ agreements.

Sebring City Clerk Kathy Haley confirmed Tuesday afternoon that that matter would be on the Sebring City Council agenda that night.