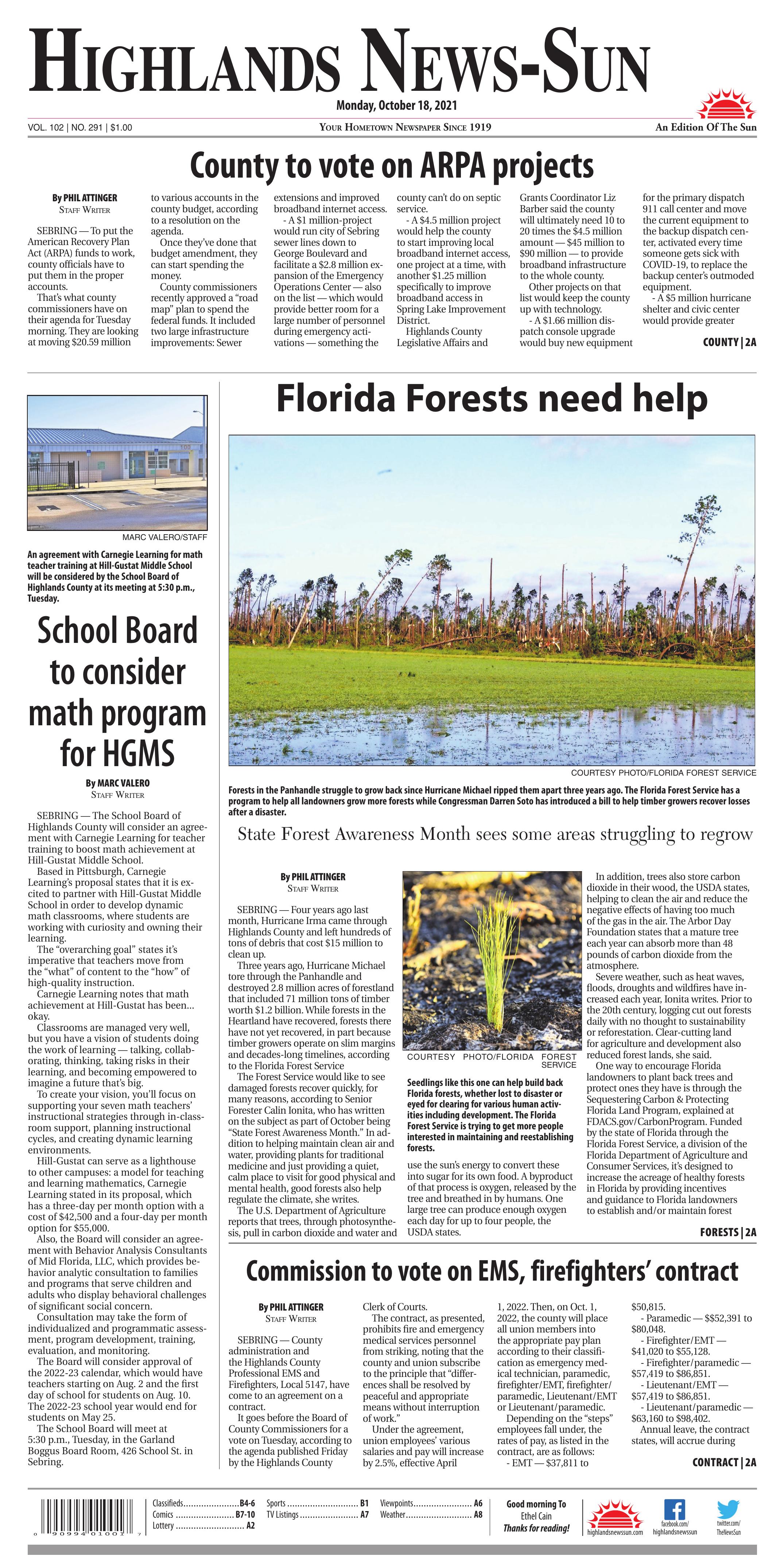 SEBRING — To put the American Recovery Plan Act (ARPA) funds to work, county officials have to put them in the proper accounts.

That’s what county commissioners have on their agenda for Tuesday morning. They are looking at moving $20.59 million to various accounts in the county budget, according to a resolution on the agenda.

Once they’ve done that budget amendment, they can start spending the money.

- A $1 million-project would run city of Sebring sewer lines down to George Boulevard and facilitate a $2.8 million expansion of the Emergency Operations Center — also on the list — which would provide better room for a large number of personnel during emergency activations — something the county can’t do on septic service.

- A $4.5 million project would help the county to start improving local broadband internet access, one project at a time, with another $1.25 million specifically to improve broadband access in Spring Lake Improvement District.

Other projects on that list would keep the county up with technology.

- A $1.66 million dispatch console upgrade would buy new equipment for the primary dispatch 911 call center and move the current equipment to the backup dispatch center, activated every time someone gets sick with COVID-19, to replace the backup center’s outmoded equipment.

- A $5 million hurricane shelter and civic center would provide greater capacity and, depending on location, greater accessibility to local and out-of-county evacuees.

- A $175,000 series of library upgrades would improve outreach and operations at the one place many people in the county count on for internet access.

- A $125,000 remodeling of the Highlands County Government Annex would help Development Services and related offices stay open with proper social distancing in a pandemic.

Other items on the list include a $62,648 drive-through at the Highlands County Health Department, $45,590 to improve the mail-in elections process and $6,500 to help the Veterans Services Office reach out to veterans during the pandemic.

Forests in the Panhandle struggle to grow back since Hurricane Michael ripped them apart three years ago. The Florida Forest Service has a program to help all landowners grow more forests while Congressman Darren Soto has introduced a bill to help timber growers recover losses after a disaster.

Seedlings like this one can help build back Florida forests, whether lost to disaster or eyed for clearing for various human activities including development. The Florida Forest Service is trying to get more people interested in maintaining and reestablishing forests.

A graphic from the Florida Forest Service shows the extent of forest damage from Hurricane Michael three years ago. Timber growers are still trying to recover, but a new bill in Congress may help them recover losses and replant.

SEBRING — Four years ago last month, Hurricane Irma came through Highlands County and left hundreds of tons of debris that cost $15 million to clean up.

Three years ago, Hurricane Michael tore through the Panhandle and destroyed 2.8 million acres of forestland that included 71 million tons of timber worth $1.2 billion. While forests in the Heartland have recovered, forests there have not yet recovered, in part because timber growers operate on slim margins and decades-long timelines, according to the Florida Forest Service

The Forest Service would like to see damaged forests recover quickly, for many reasons, according to Senior Forester Calin Ionita, who has written on the subject as part of October being “State Forest Awareness Month.” In addition to helping maintain clean air and water, providing plants for traditional medicine and just providing a quiet, calm place to visit for good physical and mental health, good forests also help regulate the climate, she writes.

The U.S. Department of Agriculture reports that trees, through photosynthesis, pull in carbon dioxide and water and use the sun’s energy to convert these into sugar for its own food. A byproduct of that process is oxygen, released by the tree and breathed in by humans. One large tree can produce enough oxygen each day for up to four people, the USDA states.

In addition, trees also store carbon dioxide in their wood, the USDA states, helping to clean the air and reduce the negative effects of having too much of the gas in the air. The Arbor Day Foundation states that a mature tree each year can absorb more than 48 pounds of carbon dioxide from the atmosphere.

Severe weather, such as heat waves, floods, droughts and wildfires have increased each year, Ionita writes. Prior to the 20th century, logging cut out forests daily with no thought to sustainability or reforestation. Clear-cutting land for agriculture and development also reduced forest lands, she said.

One way to encourage Florida landowners to plant back trees and protect ones they have is through the Sequestering Carbon & Protecting Florida Land Program, explained at FDACS.gov/CarbonProgram. Funded by the state of Florida through the Florida Forest Service, a division of the Florida Department of Agriculture and Consumer Services, it’s designed to increase the acreage of healthy forests in Florida by providing incentives and guidance to Florida landowners to establish and/or maintain forest ecosystems.

It’s finished its first round of applications, but if successful, might become a larger program.

SEBRING — County administration and the Highlands County Professional EMS and Firefighters, Local 5147, have come to an agreement on a contract.

It goes before the Board of County Commissioners for a vote on Tuesday, according to the agenda published Friday by the Highlands County Clerk of Courts.

The contract, as presented, prohibits fire and emergency medical services personnel from striking, noting that the county and union subscribe to the principle that “differences shall be resolved by peaceful and appropriate means without interruption of work.”

Under the agreement, union employees’ various salaries and pay will increase by 2.5%, effective April 1, 2022. Then, on Oct. 1, 2022, the county will place all union members into the appropriate pay plan according to their classification as emergency medical technician, paramedic, firefighter/EMT, firefighter/paramedic, Lieutenant/EMT or Lieutenant/paramedic.

Depending on the “steps” employees fall under, the rates of pay, as listed in the contract, are as follows:

Annual leave, the contract states, will accrue during the first six months of the employee’s 12-month probationary period. Those assigned to shift work shall accrue 145 hours per year until they serve for 10 years, at which time they will accrue 182 hours per year.

The minimum number of hours employees can carry over each year is 240 hours. Those within two years of their retirement may exceed the 240-hour cap to a maximum of 500 hours, for purposes of the annual leave buyback program in the Florida State Retirement System.

Annual holidays will follow the national holiday calendar for governments and government agencies. Employees will also receive bereavement leave and leave for civil duty, such as jury duty.

There are also provisions for health and safety, disability and discharge leave, as well as discipline, promotions and the grievance process.

The contract lays out policies for seniority, layoffs and recalls, as well as educational reimbursement. The contract also spells out what uniforms will be issued to each employee, including ballistic gear.

An agreement with Carnegie Learning for math teacher training at Hill-Gustat Middle School will be considered by the School Board of Highlands County at its meeting at 5:30 p.m., Tuesday.

SEBRING — The School Board of Highlands County will consider an agreement with Carnegie Learning for teacher training to boost math achievement at Hill-Gustat Middle School.

Based in Pittsburgh, Carnegie Learning’s proposal states that it is excited to partner with Hill-Gustat Middle School in order to develop dynamic math classrooms, where students are working with curiosity and owning their learning.

The “overarching goal” states it’s imperative that teachers move from the “what” of content to the “how” of high-quality instruction.

Carnegie Learning notes that math achievement at Hill-Gustat has been...okay.

Classrooms are managed very well, but you have a vision of students doing the work of learning — talking, collaborating, thinking, taking risks in their learning, and becoming empowered to imagine a future that’s big.

Also, the Board will consider an agreement with Behavior Analysis Consultants of Mid Florida, LLC, which provides behavior analytic consultation to families and programs that serve children and adults who display behavioral challenges of significant social concern.

Consultation may take the form of individualized and programmatic assessment, program development, training, evaluation, and monitoring.

The Board will consider approval of the 2022-23 calendar, which would have teachers starting on Aug. 2 and the first day of school for students on Aug. 10. The 2022-23 school year would end for students on May 25.

The School Board will meet at 5:30 p.m., Tuesday, in the Garland Boggus Board Room, 426 School St. in Sebring.