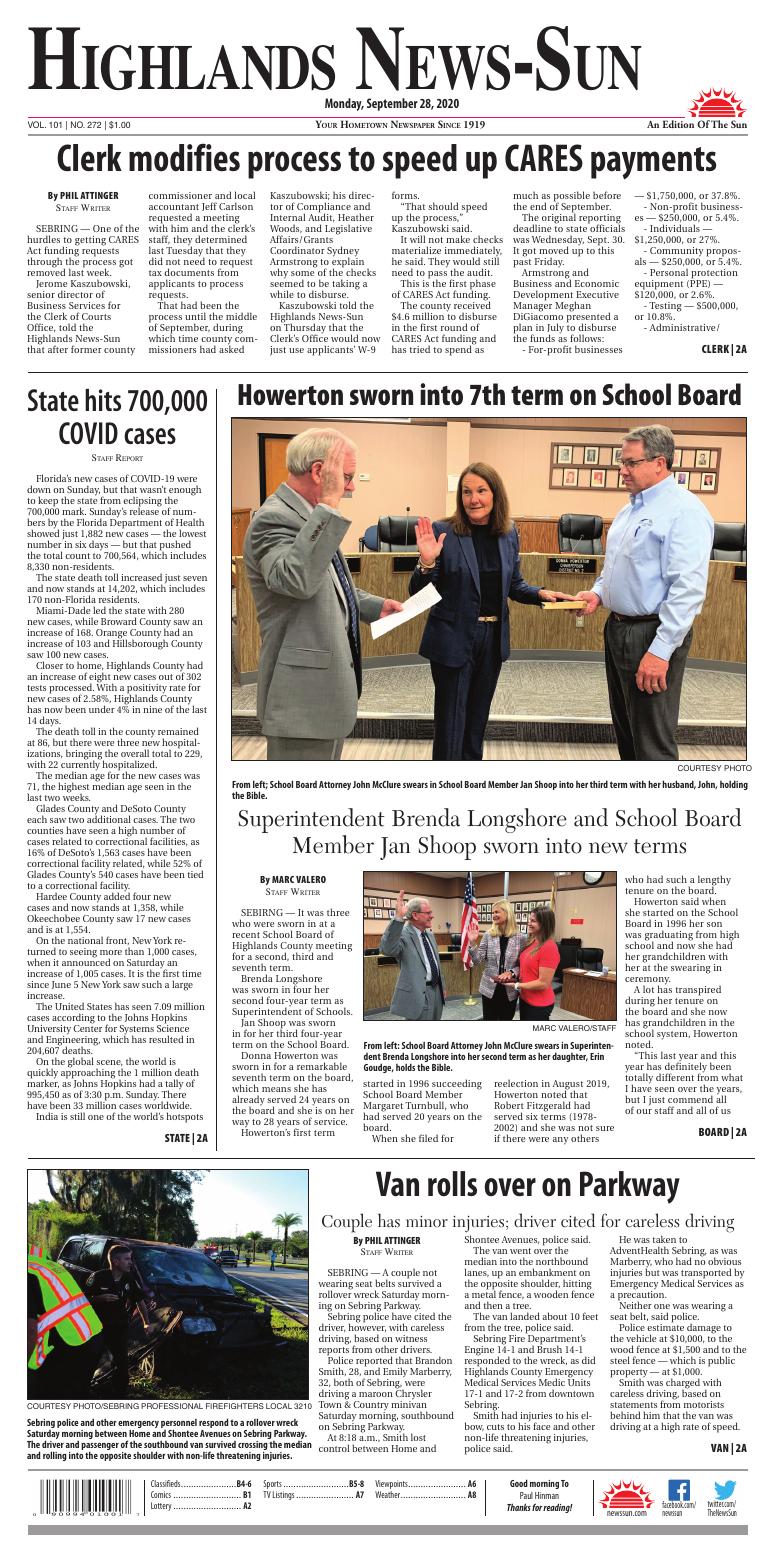 SEBRING — One of the hurdles to getting CARES Act funding requests through the process got removed last week.

Jerome Kaszubowski, senior director of Business Services for the Clerk of Courts Office, told the Highlands News-Sun that after former county commissioner and local accountant Jeff Carlson requested a meeting with him and the clerk’s staff, they determined last Tuesday that they did not need to request tax documents from applicants to process requests.

That had been the process until the middle of September, during which time county commissioners had asked Kaszubowski; his director of Compliance and Internal Audit, Heather Woods, and Legislative Affairs/Grants Coordinator Sydney Armstrong to explain why some of the checks seemed to be taking a while to disburse.

Kaszubowski told the Highlands News-Sun on Thursday that the Clerk’s Office would now just use applicants’ W-9 forms.

“That should speed up the process,” Kaszubowski said.

It will not make checks materialize immediately, he said. They would still need to pass the audit.

This is the first phase of CARES Act funding.

The county received $4.6 million to disburse in the first round of CARES Act funding and has tried to spend as much as possible before the end of September.

The original reporting deadline to state officials was Wednesday, Sept. 30. It got moved up to this past Friday.

Armstrong and Business and Economic Development Executive Manager Meghan DiGiacomo presented a plan in July to disburse the funds as follows:

So far, more than three fourths of the CARES Act cases already approved for payment have been paid or will be paid, according to a document from the Clerk of Courts Office.

As of close of business on Wednesday, 355 checks had been issued and another 142 checks pending — expected to be cut and sent on Friday — out of the 2,173 individuals who had applied for help under the Coronavirus Aid, Relief, and Economic Security (CARES) Act.

The Clerk’s Office reported on Friday that out of the total number of individual applications, Board of County Commission officials had approved 651, and of those, 550 had gone through the Compliance and Internal Audit department of the Clerk’s Office, under direction of Heather Woods.

Another 101 individual cases were pending review, as of Wednesday, Clerk’s Office documents stated.

As for businesses, the rate of approval has been 58.9% — roughly two thirds.

Out of the 656 that applied for help under CARES, 352 got approved by the county, 278 had passed audits by the clerk and 114 had audits still pending.

Out of those businesses, 102 had checks issued already as of Wednesday. Another 129 had checks pending payment.

The county received 11 community program requests and approved all of them. Nine have passed audit and two are pending audit review.

It’s an approval and payment rate of 72.7%, Clerk’s documents said.

Of business cases, 22.7% had concerns prompting auditors to send them back to the county, and 15.5% are still awaiting an answer.

Of community program cases, 11.1% were sent back to the county for research and correction, and all 11.1% are still awaiting an answer.

Clerk’s documents state that the Clerk’s IT Department is testing and preparing the Community Programs grants electronic interface to help print checks for these cases, which are currently being processed manually.

From left; School Board Attorney John McClure swears in School Board Member Jan Shoop into her third term with her husband, John, holding the Bible.

From left: School Board Attorney John McClure swears in Superintendent Brenda Longshore into her second term as her daughter, Erin Goudge, holds the Bible.

School Board Attorney John McClure administers the Oath of Office to School Board Member Donna Howerton, who is accompanied by her grandchildren.

SEBIRNG — It was three who were sworn in at a recent School Board of Highlands County meeting for a second, third and seventh term.

Brenda Longshore was sworn in four her second four-year term as Superintendent of Schools.

Jan Shoop was sworn in for her third four-year term on the School Board.

Donna Howerton was sworn in for a remarkable seventh term on the board, which means she has already served 24 years on the board and she is on her way to 28 years of service.

Howerton’s first term started in 1996 succeeding School Board Member Margaret Turnbull, who had served 20 years on the board.

When she filed for reelection in August 2019, Howerton noted that Robert Fitzgerald had served six terms (1978-2002) and she was not sure if there were any others who had such a lengthy tenure on the board.

Howerton said when she started on the School Board in 1996 her son was graduating from high school and now she had her grandchildren with her at the swearing in ceremony.

A lot has transpired during her tenure on the board and she now has grandchildren in the school system, Howerton noted.

“This last year and this year has definitely been totally different from what I have seen over the years, but I just commend all of our staff and all of us working together and that is what we have to do together — do what is best for students and staff.”

There were no challengers this year for Howerton, Shoop and Longshore. So they were able to continue in new terms without the need for an election.

Sebring police and other emergency personnel respond to a rollover wreck Saturday morning between Home and Shontee Avenues on Sebring Parkway. The driver and passenger of the southbound van survived crossing the median and rolling into the opposite shoulder with non-life threatening injuries.

Sebring police have cited the driver, however, with careless driving, based on witness reports from other drivers.

The van went over the median into the northbound lanes, up an embankment on the opposite shoulder, hitting a metal fence, a wooden fence and then a tree.

The van landed about 10 feet from the tree, police said.

Sebring Fire Department’s Engine 14-1 and Brush 14-1 responded to the wreck, as did Highlands County Emergency Medical Services Medic Units 17-1 and 17-2 from downtown Sebring.

Smith had injuries to his elbow, cuts to his face and other non-life threatening injuries, police said.

He was taken to AdventHealth Sebring, as was Marberry, who had no obvious injuries but was transported by Emergency Medical Services as a precaution.

Neither one was wearing a seat belt, said police.

Smith was charged with careless driving, based on statements from motorists behind him that the van was driving at a high rate of speed.

That short stretch of Sebring Parkway has had its share of wrecks.

The official report was that he was attempting a U-turn, but his family members have since told the Highlands News-Sun that he was actually trying to turn left when his Nissan Sentra got hit by a Dodge Ram pickup.

They base this assertion on witness accounts to them, which include allegations that the Dodge truck was speeding.

“We don’t get too many like that,” Sebring Police Cpl. Sean Bueford said Saturday.

But the Parkway has seen both rollovers and fatalities, sometimes both in the same wreck.

- On March 5, 2019, the driver of a Ford F250 SuperDuty pickup rolled his truck onto the southbound shoulder while heading southbound on Sebring Parkway at or from Home Avenue.

He was conscious and transported to a local hospital after the wreck.

- At or just before 7:20 a.m. May 8, 2018, Buick Regal got hit and rolled on Sebring Parkway at Home Avenue by a northbound Nissan Rogue that reportedly had run a red light.

The impact sent the Rogue barrel-rolling down the Parkway. Sebring Fire Capt. Austin Maddox reported at the time firefighters found the Rogue driver safe, hanging in her seat belt.

- At about 12:40 p.m. June 9, 2017, two people died when they were ejected from their sport-utility vehicle that tumbled from the eastbound lanes to the westbound shoulder, heading up a rise toward what is now the Sebring Roundabout.

Police did not believe either was wearing a seat belt. No witnesses were available to provide more information.

- Another person in that same stretch of road survived being thrown from his car.

Just before 1 a.m. April 16 of this year, Sebring police and fire departments responded to a rollover on Sebring Parkway, on the westbound lanes leading away from the roundabout and toward Ben Eastman Road.

The car swerved into the median. The driver over-corrected and rolled over an unknown number of times before landing facing north in the westbound lanes 500 feet from Ben Eastman Road.

Emergency crews found the driver alive 10 feet from the vehicle, curled up on his left side. He was transported, admitted to the hospital and stabilized.

Florida’s new cases of COVID-19 were down on Sunday, but that wasn’t enough to keep the state from eclipsing the 700,000 mark. Sunday’s release of numbers by the Florida Department of Health showed just 1,882 new cases — the lowest number in six days — but that pushed the total count to 700,564, which includes 8,330 non-residents.

The death toll in the county remained at 86, but there were three new hospitalizations, bringing the overall total to 229, with 22 currently hospitalized.

The median age for the new cases was 71, the highest median age seen in the last two weeks.

On the national front, New York returned to seeing more than 1,000 cases, when it announced on Saturday an increase of 1,005 cases. It is the first time since June 5 New York saw such a large increase.

The United States has seen 7.09 million cases according to the Johns Hopkins University Center for Systems Science and Engineering, which has resulted in 204,607 deaths.

On the global scene, the world is quickly approaching the 1 million death marker, as Johns Hopkins had a tally of 995,450 as of 3:30 p.m. Sunday. There have been 33 million cases worldwide.

India is still one of the world’s hotspots and added more than 62,000 new cases. India has seen more cases than any county other than the United States and has surpassed 6 million cases.

The United State has greatly improved testing numbers and now has given more tests than any county other than China. The U.S. has now tested roughly 31.4% of its populated based on tests given per million population. 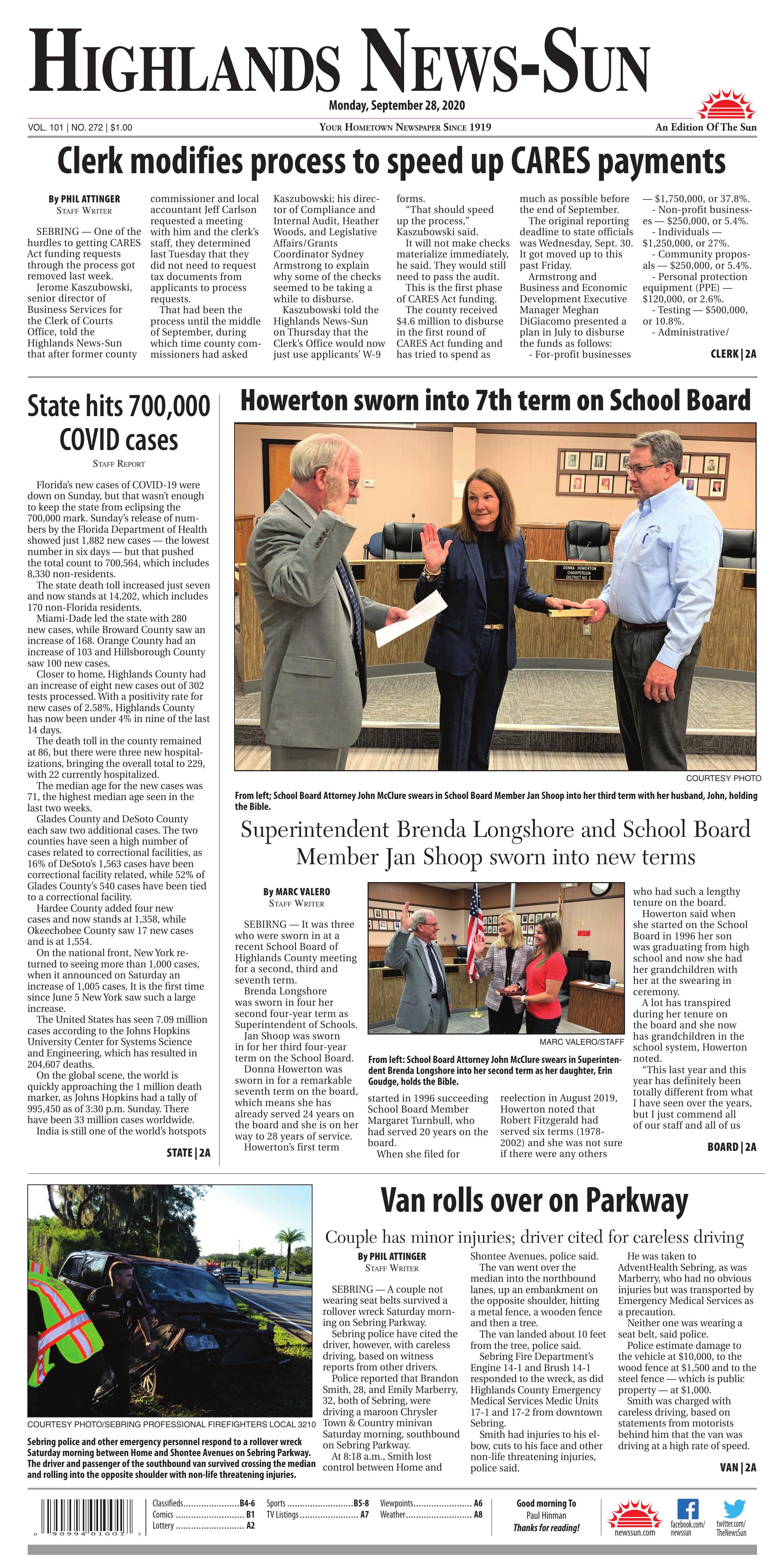