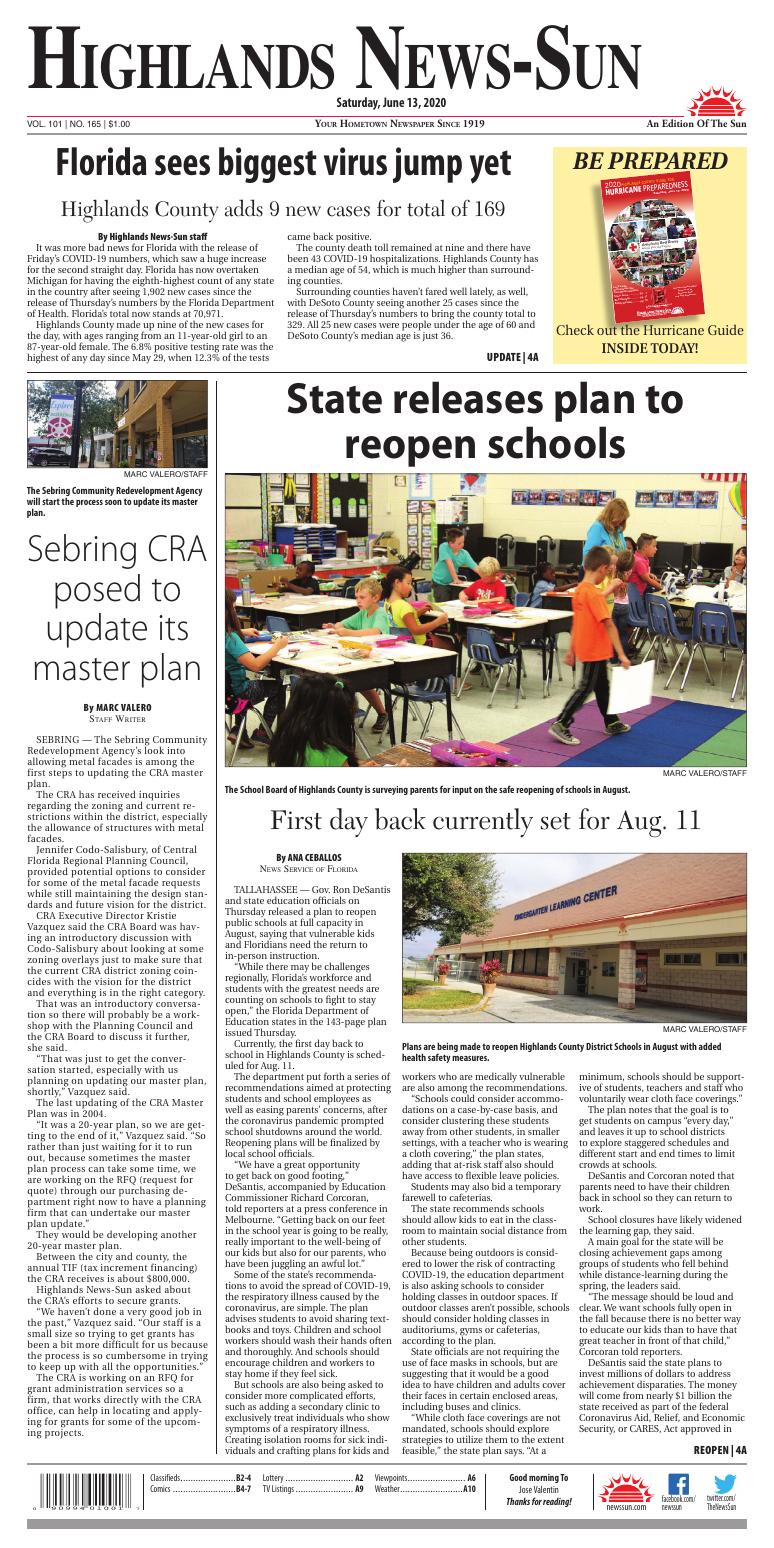 A breakdown of the positive cases as explained in Friday’s updated dashboard from the Florida Department of Health.

It was more bad news for Florida with the release of Friday’s COVID-19 numbers, which saw a huge increase for the second straight day. Florida has now overtaken Michigan for having the eighth-highest count of any state in the country after seeing 1,902 new cases since the release of Thursday’s numbers by the Florida Department of Health. Florida’s total now stands at 70,971.

Highlands County made up nine of the new cases for the day, with ages ranging from an 11-year-old girl to an 87-year-old female. The 6.8% positive testing rate was the highest of any day since May 29, when 12.3% of the tests came back positive.

The county death toll remained at nine and there have been 43 COVID-19 hospitalizations. Highlands County has a median age of 54, which is much higher than surrounding counties.

Surrounding counties haven’t fared well lately, as well, with DeSoto County seeing another 25 cases since the release of Thursday’s numbers to bring the county total to 329. All 25 new cases were people under the age of 60 and DeSoto County’s median age is just 36.

Glades County saw two news cases to bring its total to 109, with 62 of those correctional facility related. The median age of the 109 cases is 38.

Hardee County added 12 new cases, with several of those travel related and four cases involved non-county residents. Hardee County is up to 177 cases with a median age of 37.

Okeechobee County added four more cases to bring the total to 158, with 30 of those being related to a correctional facility. The county’s median age is 34.

Miami-Dade and Palm Beach County both saw more than 320 new cases since Thursday’s numbers were released.

The United States has seen a total of 2.07 million and there have been in excess of 116,000 deaths. New York has been the hardest hit state and has seen more than 382,000 cases, with more than half of those coming from New York City. The state has seen fewer than 1,000 new cases for each of the last six days.

Plans are being made to reopen Highlands County District Schools in August with added health safety measures.

The School Board of Highlands County is surveying parents for input on the safe reopening of schools in August.

“While there may be challenges regionally, Florida’s workforce and students with the greatest needs are counting on schools to fight to stay open,” the Florida Department of Education states in the 143-page plan issued Thursday.

Currently, the first day back to school in Highlands County is scheduled for Aug. 11.

The department put forth a series of recommendations aimed at protecting students and school employees as well as easing parents’ concerns, after the coronavirus pandemic prompted school shutdowns around the world. Reopening plans will be finalized by local school officials.

“We have a great opportunity to get back on good footing,” DeSantis, accompanied by Education Commissioner Richard Corcoran, told reporters at a press conference in Melbourne. “Getting back on our feet in the school year is going to be really, really important to the well-being of our kids but also for our parents, who have been juggling an awful lot.”

Some of the state’s recommendations to avoid the spread of COVID-19, the respiratory illness caused by the coronavirus, are simple. The plan advises students to avoid sharing textbooks and toys. Children and school workers should wash their hands often and thoroughly. And schools should encourage children and workers to stay home if they feel sick.

But schools are also being asked to consider more complicated efforts, such as adding a secondary clinic to exclusively treat individuals who show symptoms of a respiratory illness. Creating isolation rooms for sick individuals and crafting plans for kids and workers who are medically vulnerable are also among the recommendations.

“Schools could consider accommodations on a case-by-case basis, and consider clustering these students away from other students, in smaller settings, with a teacher who is wearing a cloth covering,” the plan states, adding that at-risk staff also should have access to flexible leave policies.

Students may also bid a temporary farewell to cafeterias.

The state recommends schools should allow kids to eat in the classroom to maintain social distance from other students.

State officials are not requiring the use of face masks in schools, but are suggesting that it would be a good idea to have children and adults cover their faces in certain enclosed areas, including buses and clinics.

The plan notes that the goal is to get students on campus “every day,” and leaves it up to school districts to explore staggered schedules and different start and end times to limit crowds at schools.

DeSantis and Corcoran noted that parents need to have their children back in school so they can return to work.

School closures have likely widened the learning gap, they said.

A main goal for the state will be closing achievement gaps among groups of students who fell behind while distance-learning during the spring, the leaders said.

“The message should be loud and clear. We want schools fully open in the fall because there is no better way to educate our kids than to have that great teacher in front of that child,” Corcoran told reporters.

DeSantis said the state plans to invest millions of dollars to address achievement disparaties. The money will come from nearly $1 billion the state received as part of the federal Coronavirus Aid, Relief, and Economic Security, or CARES, Act approved in March.

The state plans to inject $64 million into intensive summer programs to combat learning gaps and will spend $15 million on teams of reading coaches to bolster literacy instruction across the state.

DeSantis also said he wants to pump $30 million from the CARES Act into the Florida Tax Credit Scholarship program to keep providing scholarships to low-income students to attend private schools. He also plans to provide $15 million in relief to private schools who accept the scholarships.

“This will protect funding for traditional K-12 schools by preventing large increases in enrollments if students were to lose their current scholarships,” the governor said.

The Sebring Community Redevelopment Agency will start the process soon to update its master plan.

SEBRING — The Sebring Community Redevelopment Agency’s look into allowing metal facades is among the first steps to updating the CRA master plan.

The CRA has received inquiries regarding the zoning and current restrictions within the district, especially the allowance of structures with metal facades.

Jennifer Codo-Salisbury, of Central Florida Regional Planning Council, provided potential options to consider for some of the metal facade requests while still maintaining the design standards and future vision for the district.

CRA Executive Director Kristie Vazquez said the CRA Board was having an introductory discussion with Codo-Salisbury about looking at some zoning overlays just to make sure that the current CRA district zoning coincides with the vision for the district and everything is in the right category.

That was an introductory conversation so there will probably be a workshop with the Planning Council and the CRA Board to discuss it further, she said.

“That was just to get the conversation started, especially with us planning on updating our master plan, shortly,” Vazquez said.

The last updating of the CRA Master Plan was in 2004.

“It was a 20-year plan, so we are getting to the end of it,” Vazquez said. “So rather than just waiting for it to run out, because sometimes the master plan process can take some time, we are working on the RFQ (request for quote) through our purchasing department right now to have a planning firm that can undertake our master plan update.”

They would be developing another 20-year master plan.

Between the city and county, the annual TIF (tax increment financing) the CRA receives is about $800,000.

Highlands News-Sun asked about the CRA’s efforts to secure grants.

“We haven’t done a very good job in the past,” Vazquez said. “Our staff is a small size so trying to get grants has been a bit more difficult for us because the process is so cumbersome in trying to keep up with all the opportunities.”

The CRA is working on an RFQ for grant administration services so a firm, that works directly with the CRA office, can help in locating and applying for grants for some of the upcoming projects.