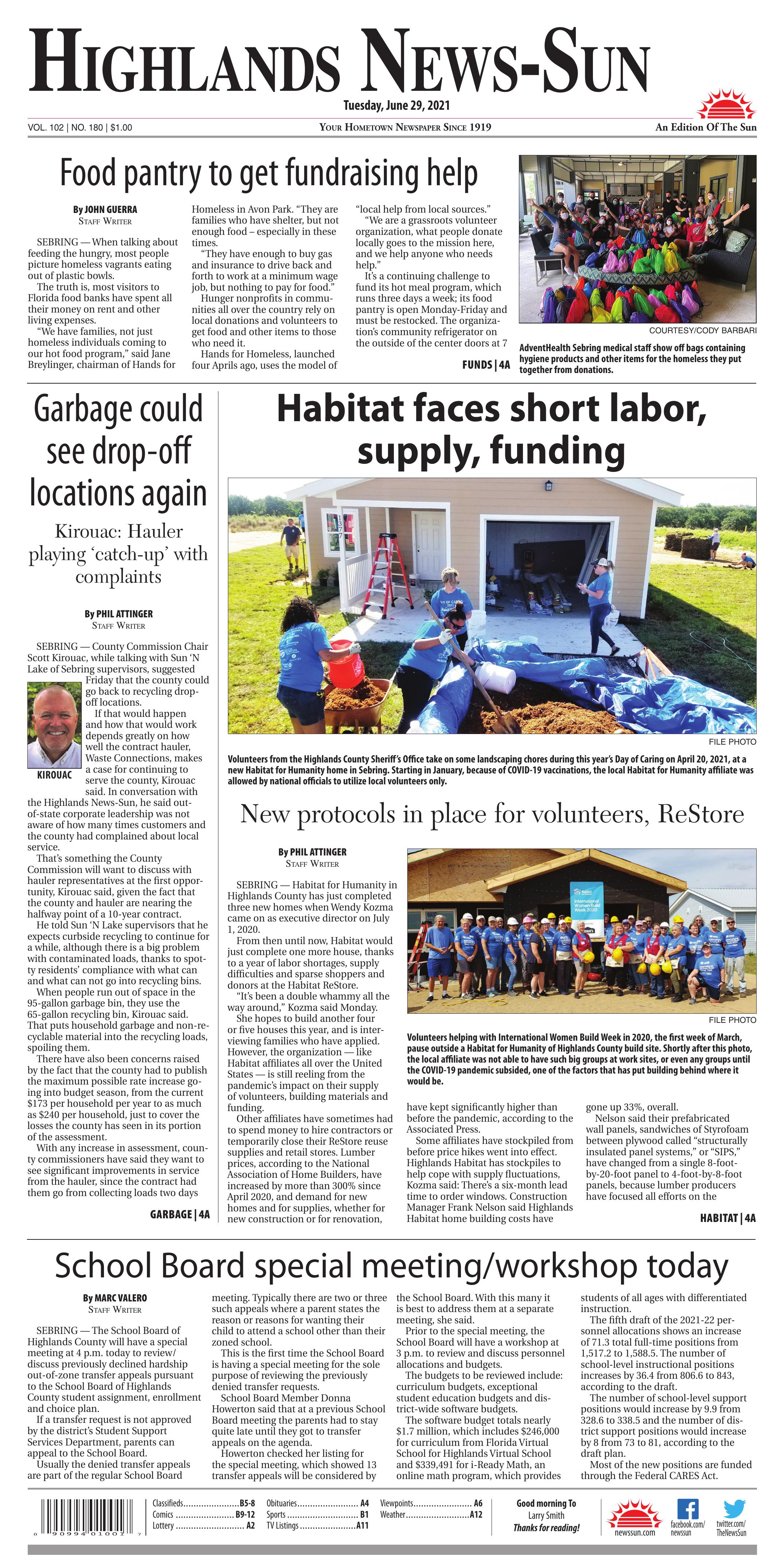 AdventHealth Sebring medical staff show off bags containing hygiene products and other items for the homeless they put together from donations.

SEBRING — When talking about feeding the hungry, most people picture homeless vagrants eating out of plastic bowls.

The truth is, most visitors to Florida food banks have spent all their money on rent and other living expenses.

“We have families, not just homeless individuals coming to our hot food program,” said Jane Breylinger, chairman of Hands for Homeless in Avon Park. “They are families who have shelter, but not enough food – especially in these times.

“They have enough to buy gas and insurance to drive back and forth to work at a minimum wage job, but nothing to pay for food.”

Hunger nonprofits in communities all over the country rely on local donations and volunteers to get food and other items to those who need it.

Hands for Homeless, launched four Aprils ago, uses the model of “local help from local sources.”

“We are a grassroots volunteer organization, what people donate locally goes to the mission here, and we help anyone who needs help.”

It’s a continuing challenge to fund its hot meal program, which runs three days a week; its food pantry is open Monday-Friday and must be restocked. The organization’s community refrigerator on the outside of the center doors at 7 Jim Rogers Ave. also has to stay stocked. Anyone can reach into it and grab some food, “24 hours a day, seven days a week,” she says.

Breylinger’s organization will now receive a little fundraising help from around the country.

“D.O. More,” a medical student charity (D.O. stands for doctors of osteopathy), will join forces with Hands for Homeless and AdventHealth Sebring to raise money for local homeless folks. Their five-day, coordinated fundraiser, from July 24-29, will utilize D.O. More’s social networking platform as well as fundraising by medical students across the country.

“We choose a city and an associated local charity to help raise money,” said Cody Barbari, an osteopath in training. He founded the nonprofit in Orlando. “We go onto Facebook, Instagram, and other social media platforms and we have about 1,500 students working all across the U.S. who also team up to raise money.”

Barbari, who trained in Orlando and now works in AdventHealth in Sebring, said the money will pay for supplies for the homeless and poor in Sebring, Avon Park and elsewhere in Highlands County, which he calls underserved areas.

“Our goal is to raise at least $5,000 to buy a thousand backpacks and fill them with items Breylinger told me they need,” Barbari said.

The backpacks will contain a three-person tent, ponchos (a good idea with all the recent torrential rains), toiletries, soap, shampoo, shaving kits, and such non-perishable food as canned vegetables, fruit and yogurt.

Hands for Homeless also raises money with its Treasure Chest Thrift Store, as well as from donations from other nonprofits. The Avon Park Elks, for instance, will donate a new refrigerator to the group during a public ceremony on July 3.

Volunteers helping with International Women Build Week in 2020, the first week of March, pause outside a Habitat for Humanity of Highlands County build site. Shortly after this photo, the local affiliate was not able to have such big groups at work sites, or even any groups until the COVID-19 pandemic subsided, one of the factors that has put building behind where it would be.

Volunteers from the Highlands County Sheriff’s Office take on some landscaping chores during this year’s Day of Caring on April 20, 2021, at a new Habitat for Humanity home in Sebring. Starting in January, because of COVID-19 vaccinations, the local Habitat for Humanity affiliate was allowed by national officials to utilize local volunteers only.

SEBRING — Habitat for Humanity in Highlands County has just completed three new homes when Wendy Kozma came on as executive director on July 1, 2020.

From then until now, Habitat would just complete one more house, thanks to a year of labor shortages, supply difficulties and sparse shoppers and donors at the Habitat ReStore.

“It’s been a double whammy all the way around,” Kozma said Monday.

She hopes to build another four or five houses this year, and is interviewing families who have applied. However, the organization — like Habitat affiliates all over the United States — is still reeling from the pandemic’s impact on their supply of volunteers, building materials and funding.

Other affiliates have sometimes had to spend money to hire contractors or temporarily close their ReStore reuse supplies and retail stores. Lumber prices, according to the National Association of Home Builders, have increased by more than 300% since April 2020, and demand for new homes and for supplies, whether for new construction or for renovation, have kept significantly higher than before the pandemic, according to the Associated Press.

Nelson said their prefabricated wall panels, sandwiches of Styrofoam between plywood called “structurally insulated panel systems,” or “SIPS,” have changed from a single 8-foot-by-20-foot panel to 4-foot-by-8-foot panels, because lumber producers have focused all efforts on the standard consumer size of plywood. Combining smaller panels into full-size walls takes longer, as much as three extra days, Nelson said.

As Florida enters the rain and hurricane season, that can be a significant setback on any project.

Another setback, the labor shortage, started abating Jan. 1, when the national office started allowing them to utilize volunteers again — just local ones — alongside paid staff. Nelson said he can handle approximately 10-12 per site per day, as long as he has work for them to do.

Canadian volunteers and the Caravaners, a group of volunteers who travel the nation in motor homes, couldn’t come to Florida because of travel restrictions. With restrictions lifted, Habitat national officials have started to allow affiliates to use volunteers from others states.

Another setback, Kozma said, is that donations have slowed to the ReStore – a significant source of funding – and Kozma doesn’t know why. If people are concerned about visiting, the store staff are sanitizing regularly and wearing masks. People who visit homes to collect donated furniture also wear masks, she said. She encourages people to come back and shop.

In each of the last three years, Habitat has built an average of 3,000 new homes in the U.S., the Associated Press reports, yet there remains a shortage of nearly 7 million affordable homes in America alone.

Habitat received about $1.5 billion in contributions and other in-kind gifts, according to the organization’s annual report for fiscal year 2019, the latest figures before the pandemic. Those gifts, coupled with federal grants, help affiliates subsidize mortgages for Habitat homes, which families build alongside volunteers and pay off through no-interest mortgages that cannot exceed 30% of homeowners’ monthly incomes.

If a transfer request is not approved by the district’s Student Support Services Department, parents can appeal to the School Board.

Usually the denied transfer appeals are part of the regular School Board meeting. Typically there are two or three such appeals where a parent states the reason or reasons for wanting their child to attend a school other than their zoned school.

This is the first time the School Board is having a special meeting for the sole purpose of reviewing the previously denied transfer requests.

School Board Member Donna Howerton said that at a previous School Board meeting the parents had to stay quite late until they got to transfer appeals on the agenda.

Howerton checked her listing for the special meeting, which showed 13 transfer appeals will be considered by the School Board. With this many it is best to address them at a separate meeting, she said.

Prior to the special meeting, the School Board will have a workshop at 3 p.m. to review and discuss personnel allocations and budgets.

The budgets to be reviewed include: curriculum budgets, exceptional student education budgets and district-wide software budgets.

The software budget totals nearly $1.7 million, which includes $246,000 for curriculum from Florida Virtual School for Highlands Virtual School and $339,491 for i-Ready Math, an online math program, which provides students of all ages with differentiated instruction.

Most of the new positions are funded through the Federal CARES Act.

If that would happen and how that would work depends greatly on how well the contract hauler, Waste Connections, makes a case for continuing to serve the county, Kirouac said. In conversation with the Highlands News-Sun, he said out-of-state corporate leadership was not aware of how many times customers and the county had complained about local service.

That’s something the County Commission will want to discuss with hauler representatives at the first opportunity, Kirouac said, given the fact that the county and hauler are nearing the halfway point of a 10-year contract.

He told Sun ‘N Lake supervisors that he expects curbside recycling to continue for a while, although there is a big problem with contaminated loads, thanks to spotty residents’ compliance with what can and what can not go into recycling bins.

When people run out of space in the 95-gallon garbage bin, they use the 65-gallon recycling bin, Kirouac said. That puts household garbage and non-recyclable material into the recycling loads, spoiling them.

There have also been concerns raised by the fact that the county had to publish the maximum possible rate increase going into budget season, from the current $173 per household per year to as much as $240 per household, just to cover the losses the county has seen in its portion of the assessment.

With any increase in assessment, county commissioners have said they want to see significant improvements in service from the hauler, since the contract had them go from collecting loads two days per week from each house to just one day’s pickup of garbage and recyclables, separately.

Before, each truck had two people, with one hopping off to grab bags and cans, risking falls and broken backs. The automated truck uses just one: the driver.

“They are making improvements,” Kirouac said. “[I’m] concerned that the changes will be temporary.”

Among those changes have been putting drivers on an hourly wage and hiring at least four extra drivers, Kirouac said. However, it took two years to get this result and bring them to the table to negotiate, he said.

“We’ve documented problems,” Kirouac said. “They’re not getting to the right people.”

There’s a possibility the county could go back to having recycling drop-off points in each community/municipality. The challenges there, as before, involve keeping people from dropping the wrong items into the roll-off Dumpsters and keeping them from piling up items outside on the ground if the bins are full.

One solution to that, Kirouac said, is having the stations manned, but doing that would mean setting up a kiosk for an attendant to monitor what’s brought in, and a locked fence to prevent people from bringing in loads after hours.

Another better solution, he suggested, would be having the hauler dedicate a truck on a certain day of the week with a driver on hand to accept or reject recycling loads from residents as they drop them off. That would be something to arrange with the hauler, as it’s not currently stipulated in the contract.