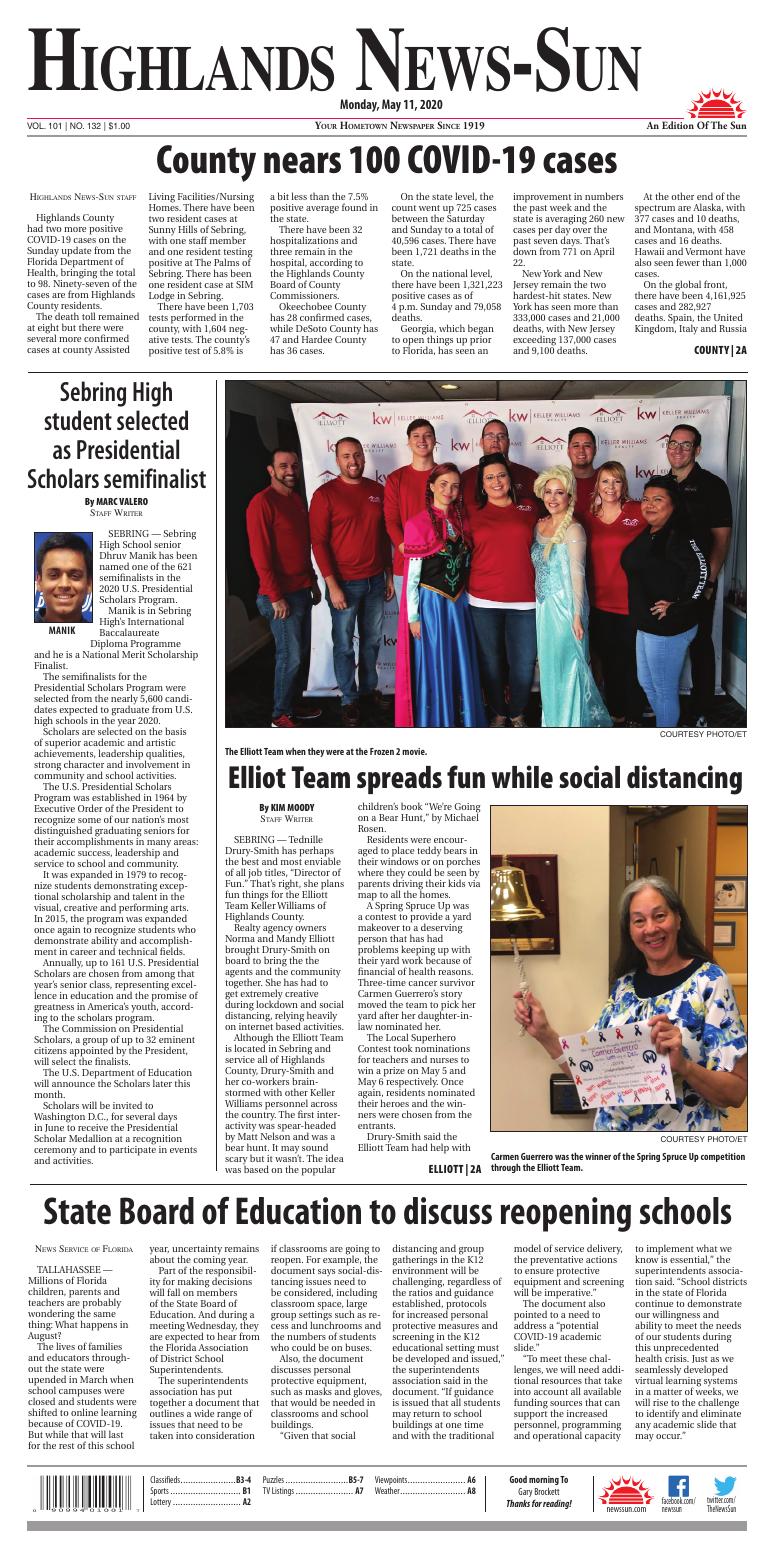 Highlands County had two more positive COVID-19 cases on the Sunday update from the Florida Department of Health, bringing the total to 98. Ninety-seven of the cases are from Highlands County residents.

The death toll remained at eight but there were several more confirmed cases at county Assisted Living Facilities/Nursing Homes. There have been two resident cases at Sunny Hills of Sebring, with one staff member and one resident testing positive at The Palms of Sebring. There has been one resident case at SIM Lodge in Sebring.

There have been 1,703 tests performed in the county, with 1,604 negative tests. The county’s positive test of 5.8% is a bit less than the 7.5% positive average found in the state.

There have been 32 hospitalizations and three remain in the hospital, according to the Highlands County Board of County Commissioners.

On the state level, the count went up 725 cases between the Saturday and Sunday to a total of 40,596 cases. There have been 1,721 deaths in the state.

Georgia, which began to open things up prior to Florida, has seen an improvement in numbers the past week and the state is averaging 260 new cases per day over the past seven days. That’s down from 771 on April 22.

At the other end of the spectrum are Alaska, with 377 cases and 10 deaths, and Montana, with 458 cases and 16 deaths. Hawaii and Vermont have also seen fewer than 1,000 cases.

The United States has performed far more tests than any county, but still lags behind on tests given per 1 million residents. Among countries to have given at least 1,000 tests, the U.S. ranked No. 27 as of Sunday morning.

The Elliott Team when they were at the Frozen 2 movie.

Carmen Guerrero was the winner of the Spring Spruce Up competition through the Elliott Team.

This bear is very complacent for a bear that is being hunted.

SEBRING — Tednille Drury-Smith has perhaps the best and most enviable of all job titles, “Director of Fun.” That’s right, she plans fun things for the Elliott Team Keller Williams of Highlands County.

Realty agency owners Norma and Mandy Elliott brought Drury-Smith on board to bring the the agents and the community together. She has had to get extremely creative during lockdown and social distancing, relying heavily on internet based activities.

Although the Elliott Team is located in Sebring and service all of Highlands County, Drury-Smith and her co-workers brainstormed with other Keller Williams personnel across the country. The first interactivity was spear-headed by Matt Nelson and was a bear hunt. It may sound scary but it wasn’t. The idea was based on the popular children’s book “We’re Going on a Bear Hunt,” by Michael Rosen.

Residents were encouraged to place teddy bears in their windows or on porches where they could be seen by parents driving their kids via map to all the homes.

A Spring Spruce Up was a contest to provide a yard makeover to a deserving person that has had problems keeping up with their yard work because of financial of health reasons. Three-time cancer survivor Carmen Guerrero’s story moved the team to pick her yard after her daughter-in-law nominated her.

The Local Superhero Contest took nominations for teachers and nurses to win a prize on May 5 and May 6 respectively. Once again, residents nominated their heroes and the winners were chosen from the entrants.

Drury-Smith said the Elliott Team had help with sponsors who gave prizes and helped with technical support such as with the virtual Trivia Night hosted by Ian Belinger.

The latest community event is a Class of 2020 send off and is also being done through social media platforms.

“Individuals and businesses can send their congratulations and encouraging words,” Drury-Smith said. “We want to let them know they haven’t been forgotten and acknowledge their huge accomplishment and moving on to the next step. We want to do our part in making them feel special.”

Mandy Elliott said she and her husband, Norm, wanted to change the company’s focus from “business and commission to community” in 2019. That’s when they brought Drury-Smith, the fun guru in.

“As a team we brainstormed ideas of what we could do to give back to the community that has supported us and is the reason for our success, the community that we all live in and love, and really make an impact,” Mandy said. “Her job is 100% to plan/coordinate all of our events and get community involvement.

“COVID-19 has definitely thrown us a curve ball when it comes to the events that we have scheduled — but we think Tenille has done a phenomenal job at being creative and coming up with innovative ideas to keep the community involved during these uncertain times. I am so proud of our entire team. Their passion for our community radiates in all aspects of their lives and overflows into their businesses.”

TALLAHASSEE — Millions of Florida children, parents and teachers are probably wondering the same thing: What happens in August?

The lives of families and educators throughout the state were upended in March when school campuses were closed and students were shifted to online learning because of COVID-19. But while that will last for the rest of this school year, uncertainty remains about the coming year.

Part of the responsibility for making decisions will fall on members of the State Board of Education. And during a meeting Wednesday, they are expected to hear from the Florida Association of District School Superintendents.

The superintendents association has put together a document that outlines a wide range of issues that need to be taken into consideration if classrooms are going to reopen. For example, the document says social-distancing issues need to be considered, including classroom space, large group settings such as recess and lunchrooms and the numbers of students who could be on buses.

Also, the document discusses personal protective equipment, such as masks and gloves, that would be needed in classrooms and school buildings.

“Given that social distancing and group gatherings in the K12 environment will be challenging, regardless of the ratios and guidance established, protocols for increased personal protective measures and screening in the K12 educational setting must be developed and issued,” the superintendents association said in the document. “If guidance is issued that all students may return to school buildings at one time and with the traditional model of service delivery, the preventative actions to ensure protective equipment and screening will be imperative.”

The document also pointed to a need to address a “potential COVID-19 academic slide.”

“To meet these challenges, we will need additional resources that take into account all available funding sources that can support the increased personnel, programming and operational capacity to implement what we know is essential,” the superintendents association said. “School districts in the state of Florida continue to demonstrate our willingness and ability to meet the needs of our students during this unprecedented health crisis. Just as we seamlessly developed virtual learning systems in a matter of weeks, we will rise to the challenge to identify and eliminate any academic slide that may occur.”

SEBRING — Sebring High School senior Dhruv Manik has been named one of the 621 semifinalists in the 2020 U.S. Presidential Scholars Program.

Manik is in Sebring High’s International Baccalaureate Diploma Programme and he is a National Merit Scholarship Finalist.

The semifinalists for the Presidential Scholars Program were selected from the nearly 5,600 candidates expected to graduate from U.S. high schools in the year 2020.

Scholars are selected on the basis of superior academic and artistic achievements, leadership qualities, strong character and involvement in community and school activities.

The U.S. Presidential Scholars Program was established in 1964 by Executive Order of the President to recognize some of our nation’s most distinguished graduating seniors for their accomplishments in many areas: academic success, leadership and service to school and community.

Annually, up to 161 U.S. Presidential Scholars are chosen from among that year’s senior class, representing excellence in education and the promise of greatness in America’s youth, according to the scholars program.

The Commission on Presidential Scholars, a group of up to 32 eminent citizens appointed by the President, will select the finalists.

The U.S. Department of Education will announce the Scholars later this month.

Scholars will be invited to Washington D.C., for several days in June to receive the Presidential Scholar Medallion at a recognition ceremony and to participate in events and activities. 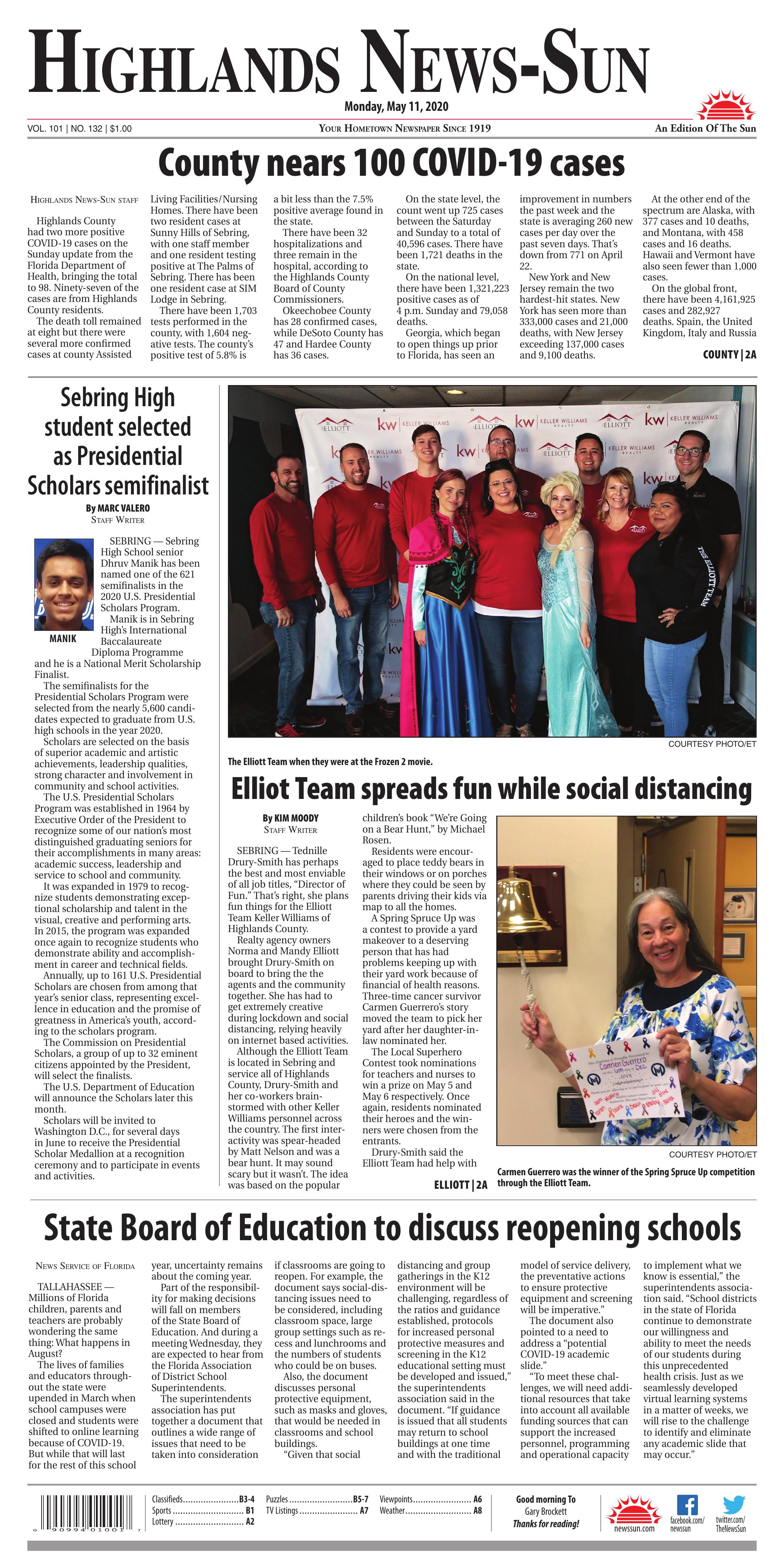