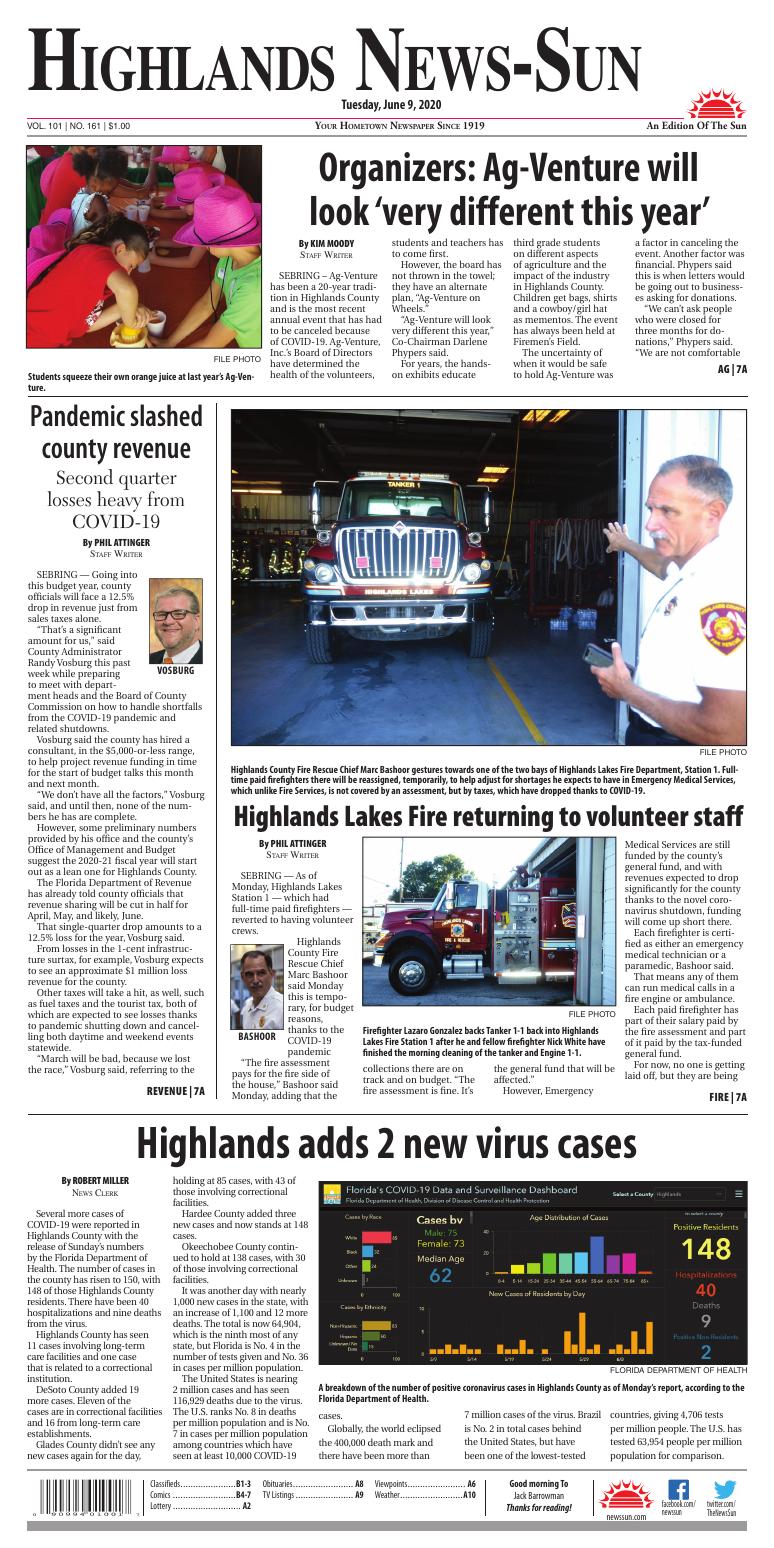 Students squeeze their own orange juice at last year’s Ag-Venture.

Children learn different aspects of the agriculture industry that is so important to the county they live in. This year, Ag-Venture will have a new look.

SEBRING – Ag-Venture has been a 20-year tradition in Highlands County and is the most recent annual event that has had to be canceled because of COVID-19. Ag-Venture, Inc.’s Board of Directors have determined the health of the volunteers, students and teachers has to come first.

However, the board has not thrown in the towel; they have an alternate plan, “Ag-Venture on Wheels.”

For years, the hands-on exhibits educate third grade students on different aspects of agriculture and the impact of the industry in Highlands County. Children get bags, shirts and a cowboy/girl hat as mementos. The event has always been held at Firemen’s Field.

The uncertainty of when it would be safe to hold Ag-Venture was a factor in canceling the event. Another factor was financial. Phypers said this is when letters would be going out to businesses asking for donations.

“We can’t ask people who were closed for three months for donations,” Phypers said. “We are not comfortable asking for donations from people that are already struggling.”

Ag-Venture on Wheels will take place in November or December. The transformed Ag-Venture will be loaded up onto a trailer and driven to all the public schools. Phypers said they have talked to the the School Board of Highlands County and said Superintendent Breda Longshore supports the plan.

There will be four interactive stations where the youngsters will learn different aspects of agriculture. The board has not yet decided which four of the seven stations will be brought to the schools.

Letters have gone out to inform individuals, volunteers and businesses about the decision to cancel the traditional Ag-Venture and replace it with the modified version. The Board of Directors would still like to be able to pass out the hats, shirts, bags and coloring books. Anyone with questions or those interested in volunteering or helping financially can call Phypers at 863-441-1317, Danielle Daum at 863-441-1312 or Judy Bronson 863-381-2859.

Highlands County Fire Rescue Chief Marc Bashoor gestures towards one of the two bays of Highlands Lakes Fire Department, Station 1. Full-time paid firefighters there will be reassigned, temporarily, to help adjust for shortages he expects to have in Emergency Medical Services, which unlike Fire Services, is not covered by an assessment, but by taxes, which have dropped thanks to COVID-19.

Firefighter Lazaro Gonzalez backs Tanker 1-1 back into Highlands Lakes Fire Station 1 after he and fellow firefighter Nick White have finished the morning cleaning of the tanker and Engine 1-1. The paid firefighters will cover shifts at other stations for a while, to help cover for Emergency Medical crews, whose budget will get hit by lost tax revenue, thanks to the COVID-19 pandemic.

Firefighter Lazaro Gonzalez finishes hanging up a uniform shirt along the back wall of Highlands Lakes Fire Station 1, where gear storage and exercise equipment share the same space with fire engines and tankers. Gonzalez and Nick White are among the paid firefighters from that station who will be moved around to help cover certain shifts, for budget reasons.

SEBRING — As of Monday, Highlands Lakes Station 1 — which had full-time paid firefighters — reverted to having volunteer crews.

Highlands County Fire Rescue Chief Marc Bashoor said Monday this is temporary, for budget reasons, thanks to the COVID-19 pandemic

However, Emergency Medical Services are still funded by the county’s general fund, and with revenues expected to drop significantly for the county thanks to the novel coronavirus shutdown, funding will come up short there.

Each firefighter is certified as either an emergency medical technician or a paramedic, Bashoor said.

That means any of them can run medical calls in a fire engine or ambulance.

Each paid firefighter has part of their salary paid by the fire assessment and part of it paid by the tax-funded general fund.

For now, no one is getting laid off, but they are being reassigned around the county to cover shifts that would have been covered by the five positions Bashoor can’t hire right now.

Highlands Lakes Station 1 has never had firefighters on 24-hour shifts, because it still needs to be rebuilt with proper crew quarters.

That worked better for volunteers to then cover the nights, weekends and holidays, Bashoor said.

In the meantime, the municipal Avon Park Fire Department/Station 5 — which has provided excellent mutual aid, Bashoor said — and Sun ‘N Lake Station 7 will cover incidents and medical calls on the north end of the county.

Firefighters on 24-hour shifts will reduce from three to two per shift, Bashoor said, at Sun ‘N Lake Station 7 and DeSoto City Fire Station 19. Each one of those stations has a medical unit, as does West Sebring Station 10 on Hammock Road.

The EMS station on Sebring Parkway in downtown Sebring has two medic units, he said.

Bashoor plans to move one of two medical units stationed at Lake Placid Station 38 in downtown Lake Placid to Sun ‘N Lakes South Station 41, as soon as accommodations are there for the crew.

At that point, he will then drop the staffing at Sun ‘N Lakes South to two firefighters per shift.

There’s not plans to reduce EMS staff now, and Bashoor said that’s something he does not want to do, but he is considering if the situation does not improve.

When asked if anyone has discussed enacting an assessment to shore up EMS, Bashoor said there has been “discussion only,” and no more than that. He does not expect anyone would want to do that any time soon, especially with everyone still struggling from the COVID-19 shutdowns.

“I don’t sense any political appetite for another assessment,” Bashoor said.

A breakdown of the number of positive coronavirus cases in Highlands County as of Monday’s report, according to the Florida Department of Health.

Several more cases of COVID-19 were reported in Highlands County with the release of Sunday’s numbers by the Florida Department of Health. The number of cases in the county has risen to 150, with 148 of those Highlands County residents. There have been 40 hospitalizations and nine deaths from the virus.

Highlands County has seen 11 cases involving long-term care facilities and one case that is related to a correctional institution.

DeSoto County added 19 more cases. Eleven of the cases are in correctional facilities and 16 from long-term care establishments.

Glades County didn’t see any new cases again for the day, holding at 85 cases, with 43 of those involving correctional facilities.

Okeechobee County continued to hold at 138 cases, with 30 of those involving correctional facilities.

Globally, the world eclipsed the 400,000 death mark and there have been more than 7 million cases of the virus. Brazil is No. 2 in total cases behind the United States, but have been one of the lowest-tested countries, giving 4,706 tests per million people. The U.S. has tested 63,954 people per million population for comparison.

SEBRING — Going into this budget year, county officials will face a 12.5% drop in revenue just from sales taxes alone.

“That’s a significant amount for us,” said County Administrator Randy Vosburg this past week while preparing to meet with department heads and the Board of County Commission on how to handle shortfalls from the COVID-19 pandemic and related shutdowns.

Vosburg said the county has hired a consultant, in the $5,000-or-less range, to help project revenue funding in time for the start of budget talks this month and next month.

“We don’t have all the factors,” Vosburg said, and until then, none of the numbers he has are complete.

However, some preliminary numbers provided by his office and the county’s Office of Management and Budget suggest the 2020-21 fiscal year will start out as a lean one for Highlands County.

The Florida Department of Revenue has already told county officials that revenue sharing will be cut in half for April, May, and likely, June.

That single-quarter drop amounts to a 12.5% loss for the year, Vosburg said.

From losses in the 1-cent infrastructure surtax, for example, Vosburg expects to see an approximate $1 million loss revenue for the county.

Other taxes will take a hit, as well, such as fuel taxes and the tourist tax, both of which are expected to see losses thanks to pandemic shutting down and cancelling both daytime and weekend events statewide.

“March will be bad, because we lost the race,” Vosburg said, referring to the 12 Hours of Sebring and the related loss of hotel room/short-term home rentals, restaurant business, retail grocery and supplies sales and side-trips by visitors to other events and attractions.

To figure the actual impact, Vosburg said, consultants and county budget officials will need to review the actual figures and apply multipliers to account for the expected related business.

“We’re just now starting to get a glimpse of the assessment,” Vosburg said.

In talking with the Highlands News-Sun, Vosburg said that not only is it similar to assessing hurricane damage, but trying to do so during the eye of the storm: The economic impact of the pandemic has not subsided, yet.

OMB Manager David Nitz said another factor in planning for a shortfall is that reports from the Florida Department of Revenue usually take two months or more to return.

Another challenge with this situation in particular, Nitz said, is that while taxes like the 4-cent local option tourist tax on short-term lodging only goes toward marketing the county, and can’t be used for anything else, other general fund taxes, like the sales taxes, will get hit.

The county might be able to disburse general fund monies to help specific funds, like tourism marketing, or infrastructure, which will take a hit from losses in gasoline sales.

However, none of those specialized taxes are allowed to go to the general fund, by Florida law, because they were enacted and collected for specific purposes, such as road construction or maintenance.

For the most part, the county depends on property taxes, and while they may not change this year, they will be affected, as well, Vosburg said.

Vosburg said property taxes may drop in a year or two, because that also happened approximately two years after the 2008-2009 Great Recession.

It’s likely a decrease in property values from lagging maintenance or an increase in foreclosures, Vosburg said.

The time difference after the event, he suggested, may also have to do with how soon appraisers make the rounds to check on improvements or depreciation in the buildings. 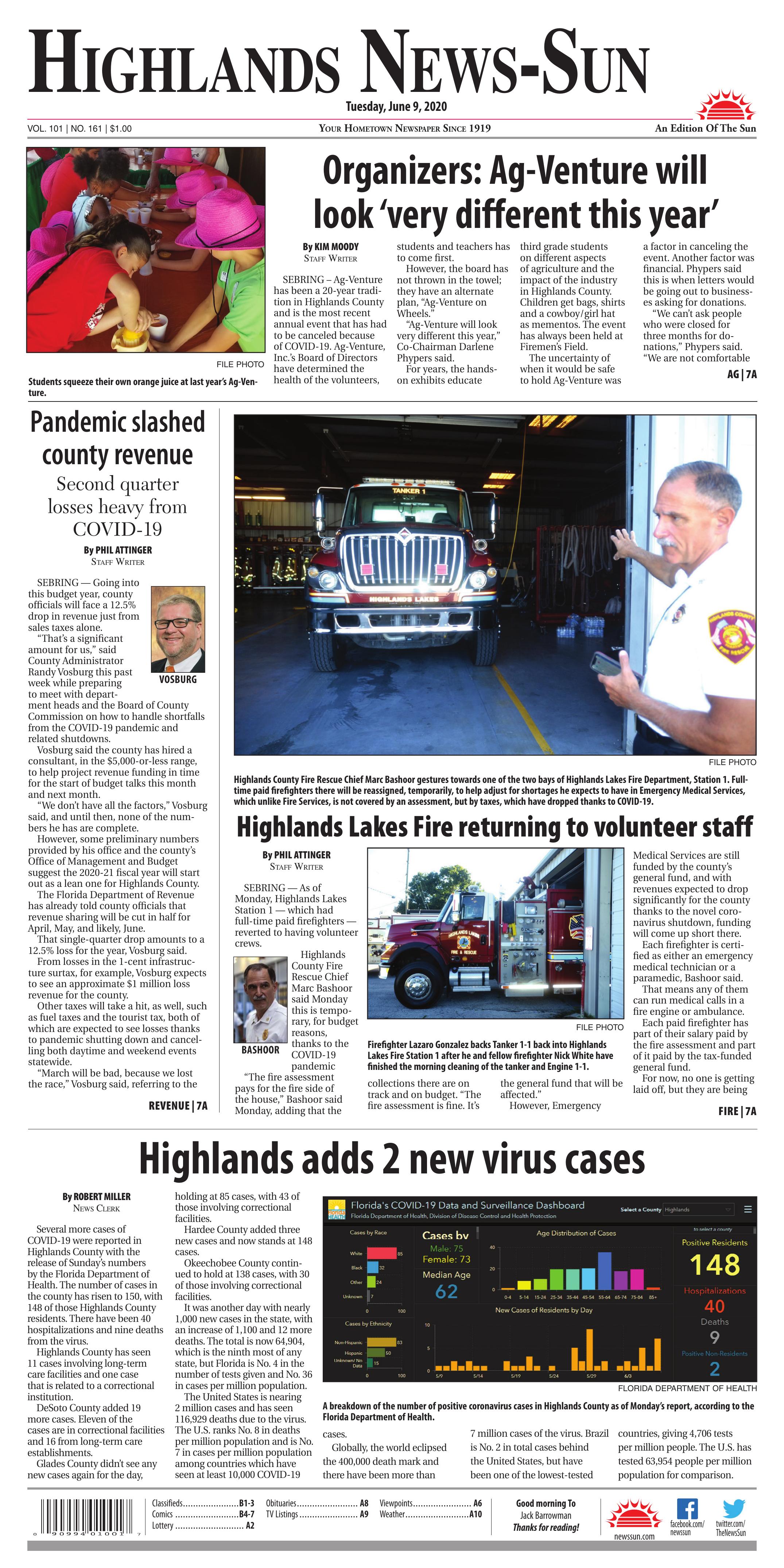