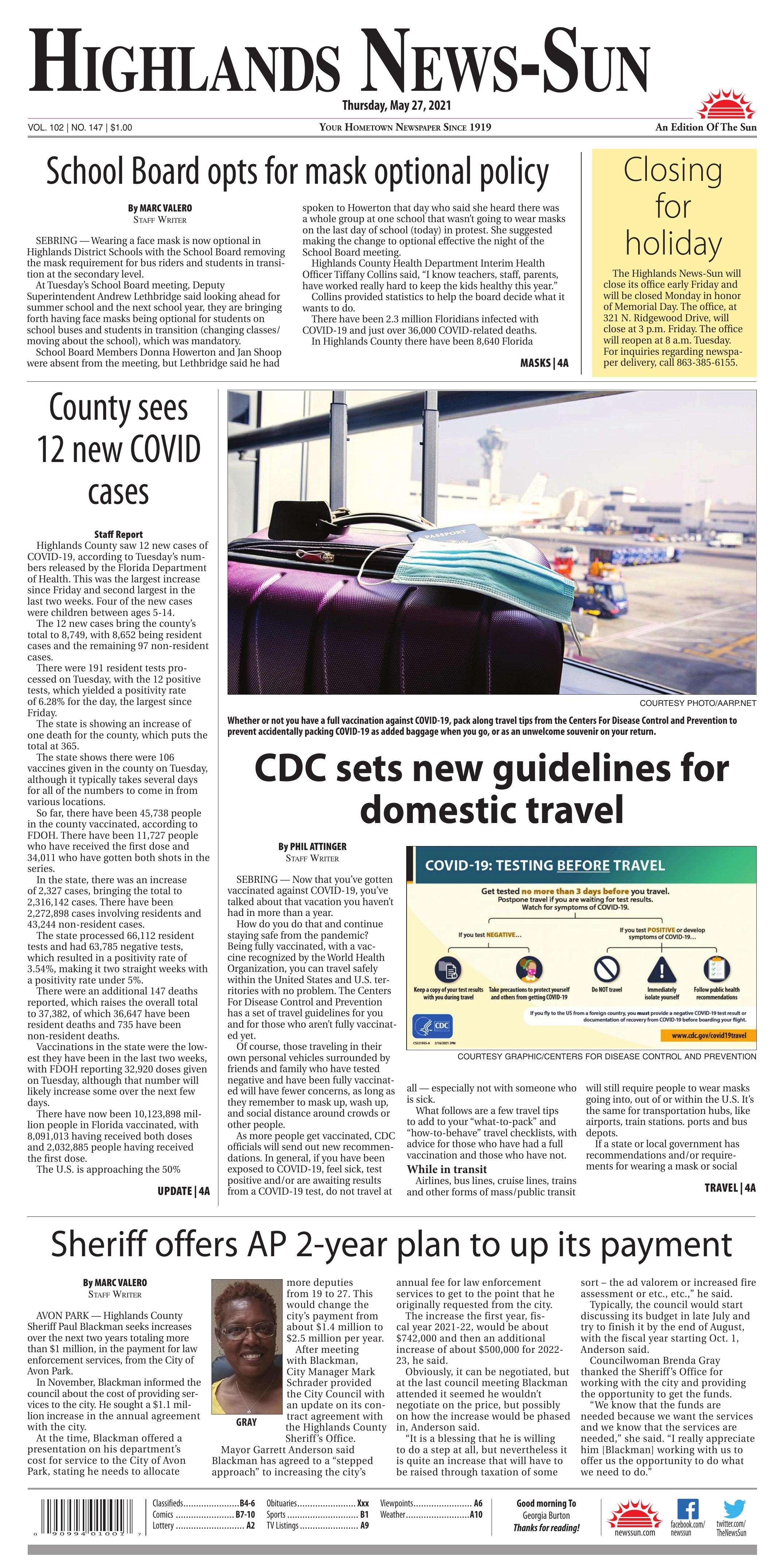 SEBRING — Wearing a face mask is now optional in Highlands District Schools with the School Board removing the mask requirement for bus riders and students in transition at the secondary level.

At Tuesday’s School Board meeting, Deputy Superintendent Andrew Lethbridge said looking ahead for summer school and the next school year, they are bringing forth having face masks being optional for students on school buses and students in transition (changing classes/moving about the school), which was mandatory.

School Board Members Donna Howerton and Jan Shoop were absent from the meeting, but Lethbridge said he had spoken to Howerton that day who said she heard there was a whole group at one school that wasn’t going to wear masks on the last day of school (today) in protest. She suggested making the change to optional effective the night of the School Board meeting.

Collins provided statistics to help the board decide what it wants to do.

There have been 2.3 million Floridians infected with COVID-19 and just over 36,000 COVID-related deaths.

In Highlands County there have been 8,640 Florida resident cases with 907 of those being pediatric cases (18 and under).

There were three new pediatric cases in the latest daily report, so there is still some exposures, Collins said. Overall, there have been 15 pediatric hospitalizations in Highlands and no deaths.

Overall (for all ages) in Highlands County, there have been 677 hospitalizations and 364 deaths, she said.

Highlands County has a very high percentage of cases in those 65 and up, Collins said. Everybody is susceptible to COVID, but it was a vulnerable population for this county.

Two members of the public and one district staff member spoke in favor of making face masks optional.

Lethbridge said most school districts in the state are ending the mask requirements and the majority of the Highlands District school bus drivers support having the masks optional.

Whether or not you have a full vaccination against COVID-19, pack along travel tips from the Centers For Disease Control and Prevention to prevent accidentally packing COVID-19 as added baggage when you go, or as an unwelcome souvenir on your return.

SEBRING — Now that you’ve gotten vaccinated against COVID-19, you’ve talked about that vacation you haven’t had in more than a year.

How do you do that and continue staying safe from the pandemic? Being fully vaccinated, with a vaccine recognized by the World Health Organization, you can travel safely within the United States and U.S. territories with no problem. The Centers For Disease Control and Prevention has a set of travel guidelines for you and for those who aren’t fully vaccinated yet.

Of course, those traveling in their own personal vehicles surrounded by friends and family who have tested negative and have been fully vaccinated will have fewer concerns, as long as they remember to mask up, wash up, and social distance around crowds or other people.

As more people get vaccinated, CDC officials will send out new recommendations. In general, if you have been exposed to COVID-19, feel sick, test positive and/or are awaiting results from a COVID-19 test, do not travel at all — especially not with someone who is sick.

What follows are a few travel tips to add to your “what-to-pack” and “how-to-behave” travel checklists, with advice for those who have had a full vaccination and those who have not.

While in transitAirlines, bus lines, cruise lines, trains and other forms of mass/public transit will still require people to wear masks going into, out of or within the U.S. It’s the same for transportation hubs, like airports, train stations. ports and bus depots.

If a state or local government has recommendations and/or requirements for wearing a mask or social distancing, follow them. While you might not have to wear a mask in all places at all times, make sure you have one on hand and watch for signs indicating you need to put it on.

Those who haven’t had a full vaccination will need to get a viral test one to three days before taking a trip, leaving enough time to get a result before leaving.

Once arrivingFollow all state and local recommendations and requirements for masking and social distancing when you arrive. Self-monitor yourself for COVID-19 symptoms. If you develop any symptoms, isolate yourself and get tested.

If you have received a full vaccination or have recovered from having COVID-19 in the last three months, you will not need to get tested or self-quarantine, but you will need to follow all other recommendations.

If you are not fully vaccinated and must absolutely take a trip, make sure you get tested one to three days ahead of the trip, wear a mask over your nose and mouth at all times, avoid crowds and stay at least six feet/two meters — about two arm lengths — from anyone who is not traveling with you as part of your party.

Always wash your hands often and/or use hand sanitizer with at least 60% alcohol.

Those who don’t get a test must stay home and self-quarantine for at least 10 days, and all people, tested or not, should avoid being around those who have an increased risk of severe illness for 14 days. Those who test positive must isolate themselves until they test negative to protect others from getting infected.

Again, be aware of state and local recommendations and/or requirements, as listed on the state, territory, tribal or local health department websites. For Highlands County, that site is FloridaHealthCOVID19.gov.

News
Sheriff offers AP 2-year plan to up its payment

AVON PARK — Highlands County Sheriff Paul Blackman seeks increases over the next two years totaling more than $1 million, in the payment for law enforcement services, from the City of Avon Park.

In November, Blackman informed the council about the cost of providing services to the city. He sought a $1.1 million increase in the annual agreement with the city.

At the time, Blackman offered a presentation on his department’s cost for service to the City of Avon Park, stating he needs to allocate more deputies from 19 to 27. This would change the city’s payment from about $1.4 million to $2.5 million per year.

After meeting with Blackman, City Manager Mark Schrader provided the City Council with an update on its contract agreement with the Highlands County Sheriff’s Office.

Mayor Garrett Anderson said Blackman has agreed to a “stepped approach” to increasing the city’s annual fee for law enforcement services to get to the point that he originally requested from the city.

Obviously, it can be negotiated, but at the last council meeting Blackman attended it seemed he wouldn’t negotiate on the price, but possibly on how the increase would be phased in, Anderson said.

“It is a blessing that he is willing to do a step at all, but nevertheless it is quite an increase that will have to be raised through taxation of some sort – the ad valorem or increased fire assessment or etc., etc.,” he said.

Typically, the council would start discussing its budget in late July and try to finish it by the end of August, with the fiscal year starting Oct. 1, Anderson said.

Councilwoman Brenda Gray thanked the Sheriff’s Office for working with the city and providing the opportunity to get the funds.

Highlands County saw 12 new cases of COVID-19, according to Tuesday’s numbers released by the Florida Department of Health. This was the largest increase since Friday and second largest in the last two weeks. Four of the new cases were children between ages 5-14.

There were 191 resident tests processed on Tuesday, with the 12 positive tests, which yielded a positivity rate of 6.28% for the day, the largest since Friday.

The state is showing an increase of one death for the county, which puts the total at 365.

The state shows there were 106 vaccines given in the county on Tuesday, although it typically takes several days for all of the numbers to come in from various locations.

So far, there have been 45,738 people in the county vaccinated, according to FDOH. There have been 11,727 people who have received the first dose and 34,011 who have gotten both shots in the series.

Vaccinations in the state were the lowest they have been in the last two weeks, with FDOH reporting 32,920 doses given on Tuesday, although that number will likely increase some over the next few days.

The U.S. is approaching the 50% vaccination mark, according to the Centers for Disease Control and Prevention, as 165,074,907 people have received at least one, which is 49.7% of the population. The percentage of the country that is considered fully vaccinated is 39.7%.

Among those 12 and over, the percentage climbs to 58.9%, while 61.8% of all adults have received at least one dose of the vaccine.

Seniors have been getting vaccinated at a higher rate than any other group, with 85.5% of those 65 and over having received at least one dose and 74.1% of seniors having been fully vaccinated.

Globally, there have been 168 million cases and 3.59 million deaths.

The Highlands News-Sun will close its office early Friday and will be closed Monday in honor of Memorial Day. The office, at 321 N. Ridgewood Drive, will close at 3 p.m. Friday. The office will reopen at 8 a.m. Tuesday. For inquiries regarding newspaper delivery, call 863-385-6155.