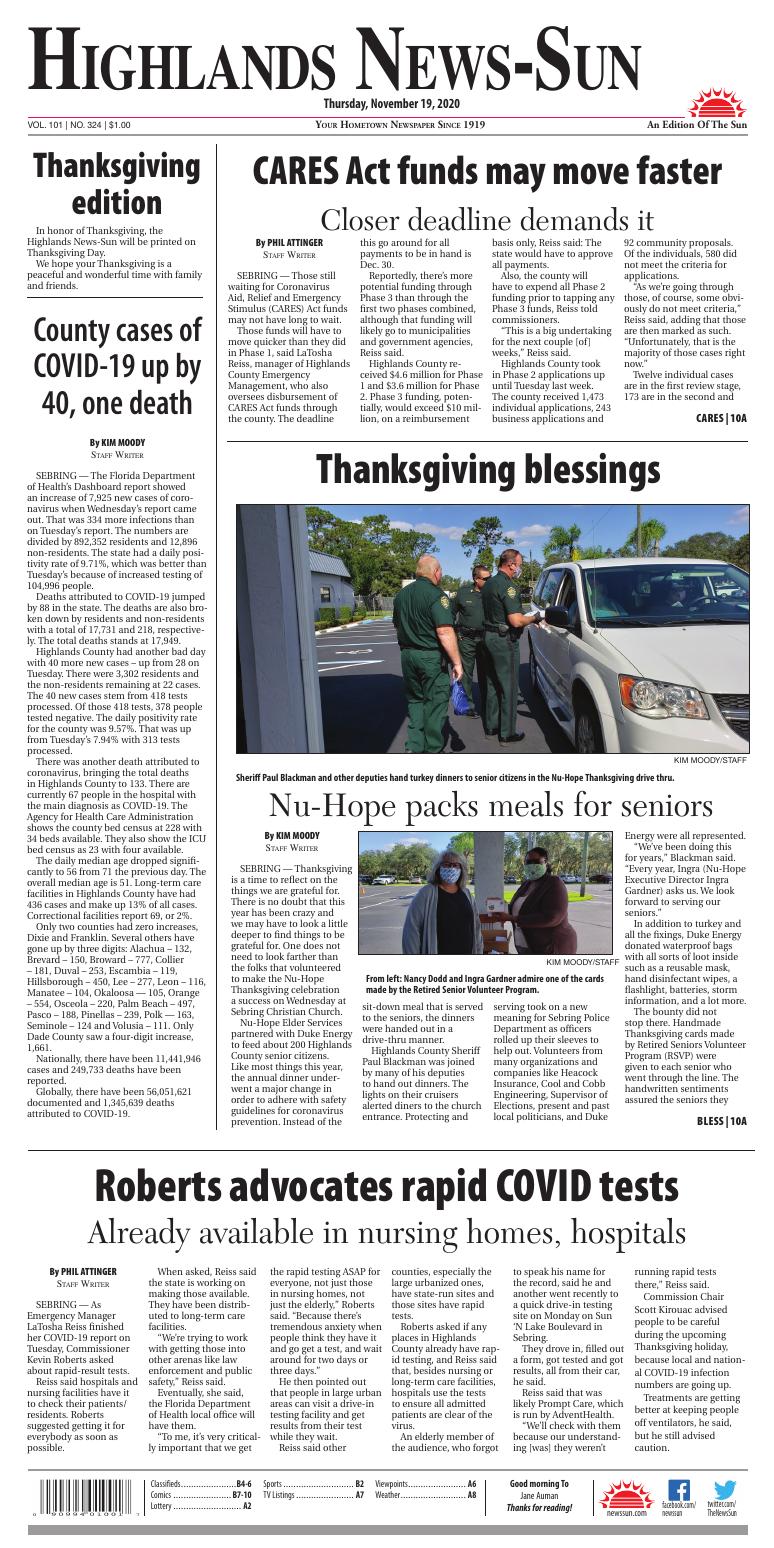 SEBRING — Those still waiting for Coronavirus Aid, Relief and Emergency Stimulus (CARES) Act funds may not have long to wait.

Those funds will have to move quicker than they did in Phase 1, said LaTosha Reiss, manager of Highlands County Emergency Management, who also oversees disbursement of CARES Act funds through the county. The deadline this go around for all payments to be in hand is Dec. 30.

Reportedly, there’s more potential funding through Phase 3 than through the first two phases combined, although that funding will likely go to municipalities and government agencies, Reiss said.

Also, the county will have to expend all Phase 2 funding prior to tapping any Phase 3 funds, Reiss told commissioners.

“This is a big undertaking for the next couple [of] weeks,” Reiss said.

Highlands County took in Phase 2 applications up until Tuesday last week. The county received 1,473 individual applications, 243 business applications and 92 community proposals. Of the individuals, 580 did not meet the criteria for applications.

“As we’re going through those, of course, some obviously do not meet criteria,” Reiss said, adding that those are then marked as such. “Unfortunately, that is the majority of those cases right now.”

Twelve individual cases are in the first review stage, 173 are in the second and 88 are in the request-for-information stage. Thirty are in final review.

Of the 243 for-profit or nonprofit business requests, 90 did not meet criteria, 17 are in first review, 17 are in second review and 11 have requests for information. Two are in final review.

Community proposals have not advanced as far as the others. Out of 92 applications, 79 did not meet criteria and the remaining 13 have only gone as far as first review.

Applications, after being submitted, go through an initial application review. If it doesn’t meet criteria, county staff reaches out to the applicant for additional information.

Once it passes, it goes to a second review. Reiss said she then reviews it, then it goes to the Clerk of Courts Office business section for an audit before being paid out.

“So it is not a quick process. It is very labor intensive,” Reiss said.

“We’re turning [them] around almost in 24 to 48 hours,” Clerk of Courts Jerome Kaszubowski said. “So everything’s getting paid very quickly in the Clerk’s Office.”

Information about the process is on the county’s website at highlandsfl.gov.

Commissioner Chris Campbell asked if the county was on time to get the funds distributed by Dec. 30. County Administrator Randy Vosburg said the county had plans to get Phase 2 funds disbursed before Thanksgiving, but that won’t happen.

As soon as county staff can show that all second-round funds have been expended, Reiss said, they will begin lining up remaining applications from local municipalities and government agencies whose requests were pushed off during the other funding phases.

When asked how quickly the state would reimburse funds to the county, Reiss said it has taken a while in the past, as with reimbursement for emergency management expenses after Hurricane Irma.

“Those processes can take a little bit of time, because, of course, they have 67 counties right now asking them for money,” Reiss said, “but they have ensured us that those will be turned around quicker than the [public assistance] processes that we are used to. They are saying within a couple of weeks.”

Commissioner Kevin Roberts asked if there would be an additional option for individuals, for-profit businesses and nonprofits to apply for funds.

“I’m afraid for Round 3, if we opened another application period, we would not have time to process those applications, get them through the audit process and paid out prior to that deadline,” Reiss said.

Roberts said he wanted to make sure funding got provided to those who need it.

“The reason I asked that is, obviously, we don’t want to leave money on the table, OK, and there are businesses out there, and individuals, as well, and some non-profits that can’t operate like they used to,” Roberts said.

Sheriff Paul Blackman and other deputies hand turkey dinners to senior citizens in the Nu-Hope Thanksgiving drive thru.

From left: Nancy Dodd and Ingra Gardner admire one of the cards made by the Retired Senior Volunteer Program.

Rick Arnold entertained the volunteers and those picking up turkey dinners on Wednesday.

Volunteers tell clients how to pick up their turkey dinners at the drive-thru area at Sebring Christian Church on Wednesday.

Carol Smith is surrounded by to go boxes of turkey dinners for pick up at Nu-Hope’s Thanksgiving celebration.

SEBRING — Thanksgiving is a time to reflect on the things we are grateful for. There is no doubt that this year has been crazy and we may have to look a little deeper to find things to be grateful for. One does not need to look farther than the folks that volunteered to make the Nu-Hope Thanksgiving celebration a success on Wednesday at Sebring Christian Church.

Nu-Hope Elder Services partnered with Duke Energy to feed about 200 Highlands County senior citizens. Like most things this year, the annual dinner underwent a major change in order to adhere with safety guidelines for coronavirus prevention. Instead of the sit-down meal that is served to the seniors, the dinners were handed out in a drive-thru manner.

Highlands County Sheriff Paul Blackman was joined by many of his deputies to hand out dinners. The lights on their cruisers alerted diners to the church entrance. Protecting and serving took on a new meaning for Sebring Police Department as officers rolled up their sleeves to help out. Volunteers from many organizations and companies like Heacock Insurance, Cool and Cobb Engineering, Supervisor of Elections, present and past local politicians, and Duke Energy were all represented.

“We’ve been doing this for years,” Blackman said. “Every year, Ingra (Nu-Hope Executive Director Ingra Gardner) asks us. We look forward to serving our seniors.”

In addition to turkey and all the fixings, Duke Energy donated waterproof bags with all sorts of loot inside such as a reusable mask, hand disinfectant wipes, a flashlight, batteries, storm information, and a lot more.

The bounty did not stop there. Handmade Thanksgiving cards made by Retired Seniors Volunteer Program (RSVP) were given to each senior who went through the line. The handwritten sentiments assured the seniors they were thought of near the holiday.

Musician Rick Arnold kept everyone’s toes tapping with his electric guitar as he sang classics and some of his original songs from his new album, “Rock the Night Away.” Arnold has volunteered his talents for the last two years for Nu-Hope.

“We are happy to be a part of something to give back to the community, especially for seniors,” Duke Energy’s Nancy Dodd said. “The bags have supplies that some of the seniors may not be able to get out and get.”

Gardner said the dinner was made possible by Duke Energy and all the volunteers.

Reiss said hospitals and nursing facilities have it to check their patients/residents. Roberts suggested getting it for everybody as soon as possible.

When asked, Reiss said the state is working on making those available. They have been distributed to long-term care facilities.

“We’re trying to work with getting those into other arenas like law enforcement and public safety,” Reiss said.

Eventually, she said, the Florida Department of Health local office will have them.

“To me, it’s very critically important that we get the rapid testing ASAP for everyone, not just those in nursing homes, not just the elderly,” Roberts said. “Because there’s tremendous anxiety when people think they have it and go get a test, and wait around for two days or three days.”

He then pointed out that people in large urban areas can visit a drive-in testing facility and get results from their test while they wait.

Reiss said other counties, especially the large urbanized ones, have state-run sites and those sites have rapid tests.

Roberts asked if any places in Highlands County already have rapid testing, and Reiss said that, besides nursing or long-term care facilities, hospitals use the tests to ensure all admitted patients are clear of the virus.

An elderly member of the audience, who forgot to speak his name for the record, said he and another went recently to a quick drive-in testing site on Monday on Sun ‘N Lake Boulevard in Sebring.

They drove in, filled out a form, got tested and got results, all from their car, he said.

Reiss said that was likely Prompt Care, which is run by AdventHealth.

“We’ll check with them because our understanding [was] they weren’t running rapid tests there,” Reiss said.

Commission Chair Scott Kirouac advised people to be careful during the upcoming Thanksgiving holiday, because local and national COVID-19 infection numbers are going up.

Treatments are getting better at keeping people off ventilators, he said, but he still advised caution.

Corona_coverage
County cases of COVID-19 up by 40, one death

SEBRING — The Florida Department of Health’s Dashboard report showed an increase of 7,925 new cases of coronavirus when Wednesday’s report came out. That was 334 more infections than on Tuesday’s report. The numbers are divided by 892,352 residents and 12,896 non-residents. The state had a daily positivity rate of 9.71%, which was better than Tuesday’s because of increased testing of 104,996 people.

Deaths attributed to COVID-19 jumped by 88 in the state. The deaths are also broken down by residents and non-residents with a total of 17,731 and 218, respectively. The total deaths stands at 17,949.

Highlands County had another bad day with 40 more new cases – up from 28 on Tuesday. There were 3,302 residents and the non-residents remaining at 22 cases. The 40 new cases stem from 418 tests processed. Of those 418 tests, 378 people tested negative. The daily positivity rate for the county was 9.57%. That was up from Tuesday’s 7.94% with 313 tests processed.

There was another death attributed to coronavirus, bringing the total deaths in Highlands County to 133. There are currently 67 people in the hospital with the main diagnosis as COVID-19. The Agency for Health Care Administration shows the county bed census at 228 with 34 beds available. They also show the ICU bed census as 23 with four available.

The daily median age dropped significantly to 56 from 71 the previous day. The overall median age is 51. Long-term care facilities in Highlands County have had 436 cases and make up 13% of all cases. Correctional facilities report 69, or 2%. 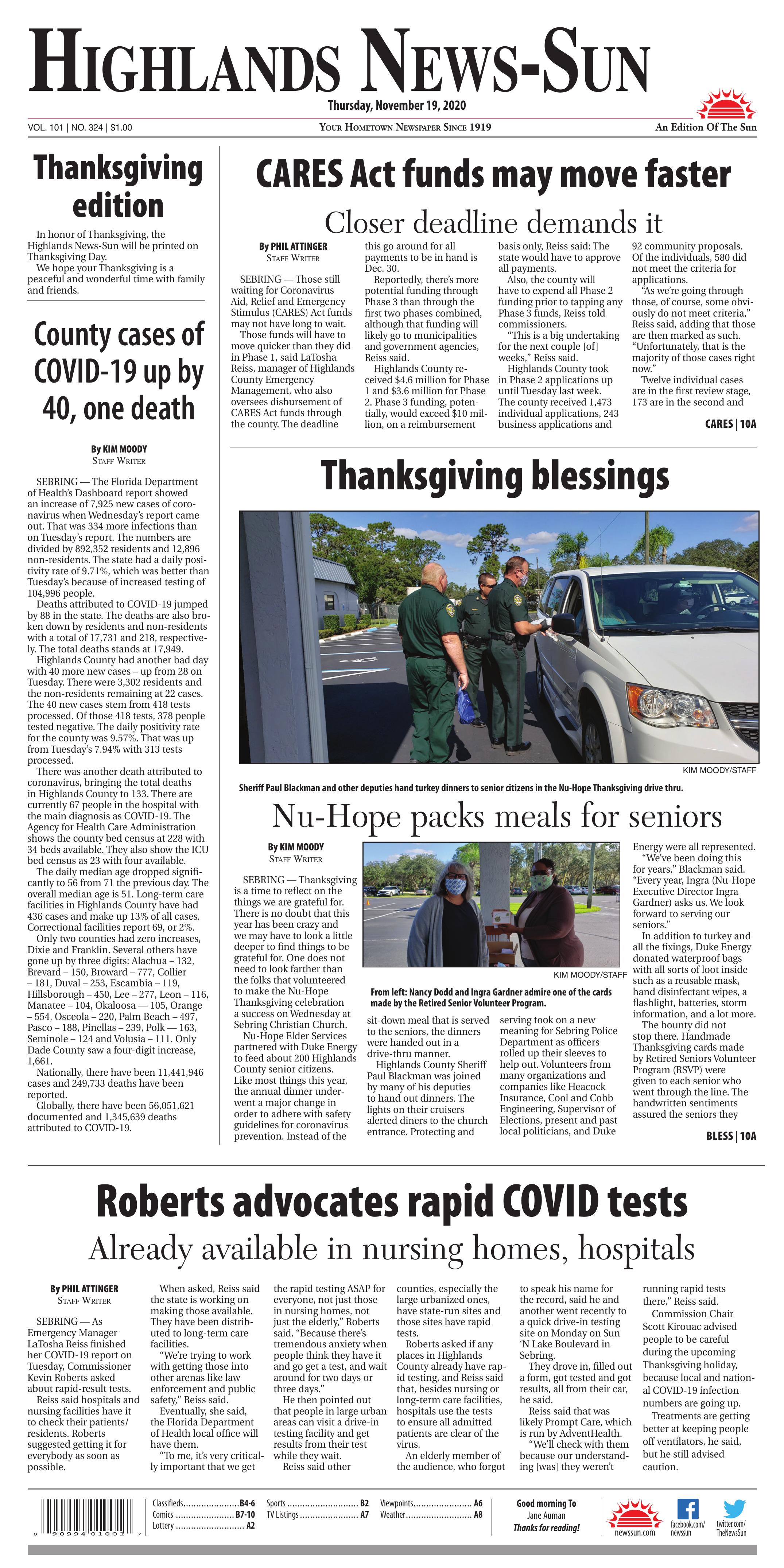