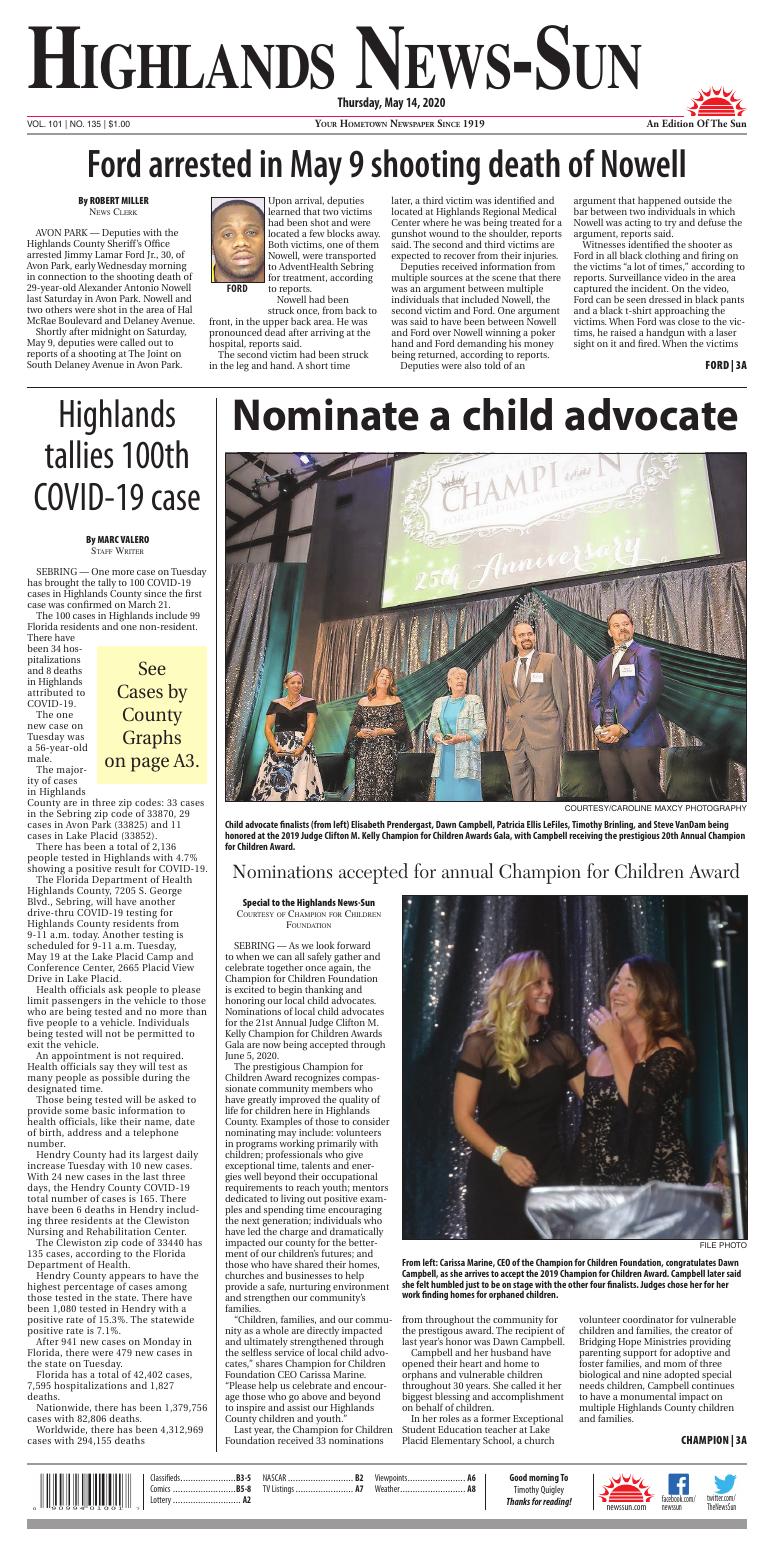 Shortly after midnight on Saturday, May 9, deputies were called out to reports of a shooting at The Joint on South Delaney Avenue in Avon Park. Upon arrival, deputies learned that two victims had been shot and were located a few blocks away. Both victims, one of them Nowell, were transported to AdventHealth Sebring for treatment, according to reports.

Nowell had been struck once, from back to front, in the upper back area. He was pronounced dead after arriving at the hospital, reports said.

The second victim had been struck in the leg and hand. A short time later, a third victim was identified and located at Highlands Regional Medical Center where he was being treated for a gunshot wound to the shoulder, reports said. The second and third victims are expected to recover from their injuries.

Deputies received information from multiple sources at the scene that there was an argument between multiple individuals that included Nowell, the second victim and Ford. One argument was said to have been between Nowell and Ford over Nowell winning a poker hand and Ford demanding his money being returned, according to reports.

Deputies were also told of an argument that happened outside the bar between two individuals in which Nowell was acting to try and defuse the argument, reports said.

Witnesses identified the shooter as Ford in all black clothing and firing on the victims “a lot of times,” according to reports. Surveillance video in the area captured the incident. On the video, Ford can be seen dressed in black pants and a black t-shirt approaching the victims. When Ford was close to the victims, he raised a handgun with a laser sight on it and fired. When the victims ran away, Ford can be seen running after them and firing again, reports said.

A warrant was issued for Ford’s arrest on Sunday and he was taken into sheriff’s custody on Tuesday, according to reports.

Ford was released from prison in October 2019 where he served more than six years of an eight-and-a-half-year sentence for aggravated battery with a deadly weapon, burglary with assault and felony battery.

Ford faces one count of felony second-degree murder, one count felony firing a weapon in public and one count felony possession of a weapon by a convicted felon. He is currently being held in the Highlands County Jail without bond.

Nowell was the third person to be killed in a shooting or stabbing incident in one month’s time in Avon Park. Arrests were also made in the April 9th stabbing death of 47-year-old Dharmik Patel, owner of the 7 Days gas station at 107 U.S. 27, and in the April 16th shooting death of 20-year-old Christopher Anthony Reese outside of a Memorial Drive residence.

From left: Carissa Marine, CEO of the Champion for Children Foundation, congratulates Dawn Campbell, as she arrives to accept the 2019 Champion for Children Award. Campbell later said she felt humbled just to be on stage with the other four finalists. Judges chose her for her work finding homes for orphaned children.

The prestigious Champion for Children Award recognizes compassionate community members who have greatly improved the quality of life for children here in Highlands County. Examples of those to consider nominating may include: volunteers in programs working primarily with children; professionals who give exceptional time, talents and energies well beyond their occupational requirements to reach youth; mentors dedicated to living out positive examples and spending time encouraging the next generation; individuals who have led the charge and dramatically impacted our county for the betterment of our children’s futures; and those who have shared their homes, churches and businesses to help provide a safe, nurturing environment and strengthen our community’s families.

“Children, families, and our community as a whole are directly impacted and ultimately strengthened through the selfless service of local child advocates,” shares Champion for Children Foundation CEO Carissa Marine. “Please help us celebrate and encourage those who go above and beyond to inspire and assist our Highlands County children and youth.”

Last year, the Champion for Children Foundation received 33 nominations from throughout the community for the prestigous award. The recipient of last year’s honor was Dawn Campbell.

Campbell and her husband have opened their heart and home to orphans and vulnerable children throughout 30 years. She called it her biggest blessing and accomplishment on behalf of children.

In her roles as a former Exceptional Student Education teacher at Lake Placid Elementary School, a church volunteer coordinator for vulnerable children and families, the creator of Bridging Hope Ministries providing parenting support for adoptive and foster families, and mom of three biological and nine adopted special needs children, Campbell continues to have a monumental impact on multiple Highlands County children and families.

The Champion for Children Foundation is honored to provide child abuse prevention programs and early intervention services to children and families in Highlands County, and celebrate those who are dedicated to advocating on behalf of the next generation. Nominations are due by June 5th, and may be emailed, mailed, or completed online: Champion for Children Foundation, 419 E. Center Ave., Sebring, FL 33870; email champforchildren.office@gmail.com or visit the website at www.ChampionforChildren.org

The annual awards gala is named in memory of Judge Clifton M. Kelly, a retired circuit judge and lifelong child advocate, who passed away in 2005. Created 21 years ago, the Champion for Children Award recognizes passionate community members who share their hearts and talents to incredibly improve the quality of life for children and positively impact youth in Highlands County.

Watch the Highlands News-Sun for the nomination form.

A breakdown of the positive cases of coronavirus in Highlands County as of Wednesday, May 13, according to the Florida Department of Health.

SEBRING — One more case on Tuesday has brought the tally to 100 COVID-19 cases in Highlands County since the first case was confirmed on March 21.

The 100 cases in Highlands include 99 Florida residents and one non-resident. There have been 34 hospitalizations and 8 deaths in Highlands attributed to COVID-19.

The one new case on Tuesday was a 56-year-old male.

There has been a total of 2,136 people tested in Highlands with 4.7% showing a positive result for COVID-19.

The Florida Department of Health Highlands County, 7205 S. George Blvd., Sebring, will have another drive-thru COVID-19 testing for Highlands County residents from 9-11 a.m. today. Another testing is scheduled for 9-11 a.m. Tuesday, May 19 at the Lake Placid Camp and Conference Center, 2665 Placid View Drive in Lake Placid.

Health officials ask people to please limit passengers in the vehicle to those who are being tested and no more than five people to a vehicle. Individuals being tested will not be permitted to exit the vehicle.

An appointment is not required. Health officials say they will test as many people as possible during the designated time.

Those being tested will be asked to provide some basic information to health officials, like their name, date of birth, address and a telephone number.

Hendry County had its largest daily increase Tuesday with 10 new cases. With 24 new cases in the last three days, the Hendry County COVID-19 total number of cases is 165. There have been 6 deaths in Hendry including three residents at the Clewiston Nursing and Rehabilitation Center.

The Clewiston zip code of 33440 has 135 cases, according to the Florida Department of Health.

Hendry County appears to have the highest percentage of cases among those tested in the state. There have been 1,080 tested in Hendry with a positive rate of 15.3%. The statewide positive rate is 7.1%.

After 941 new cases on Monday in Florida, there were 479 new cases in the state on Tuesday. 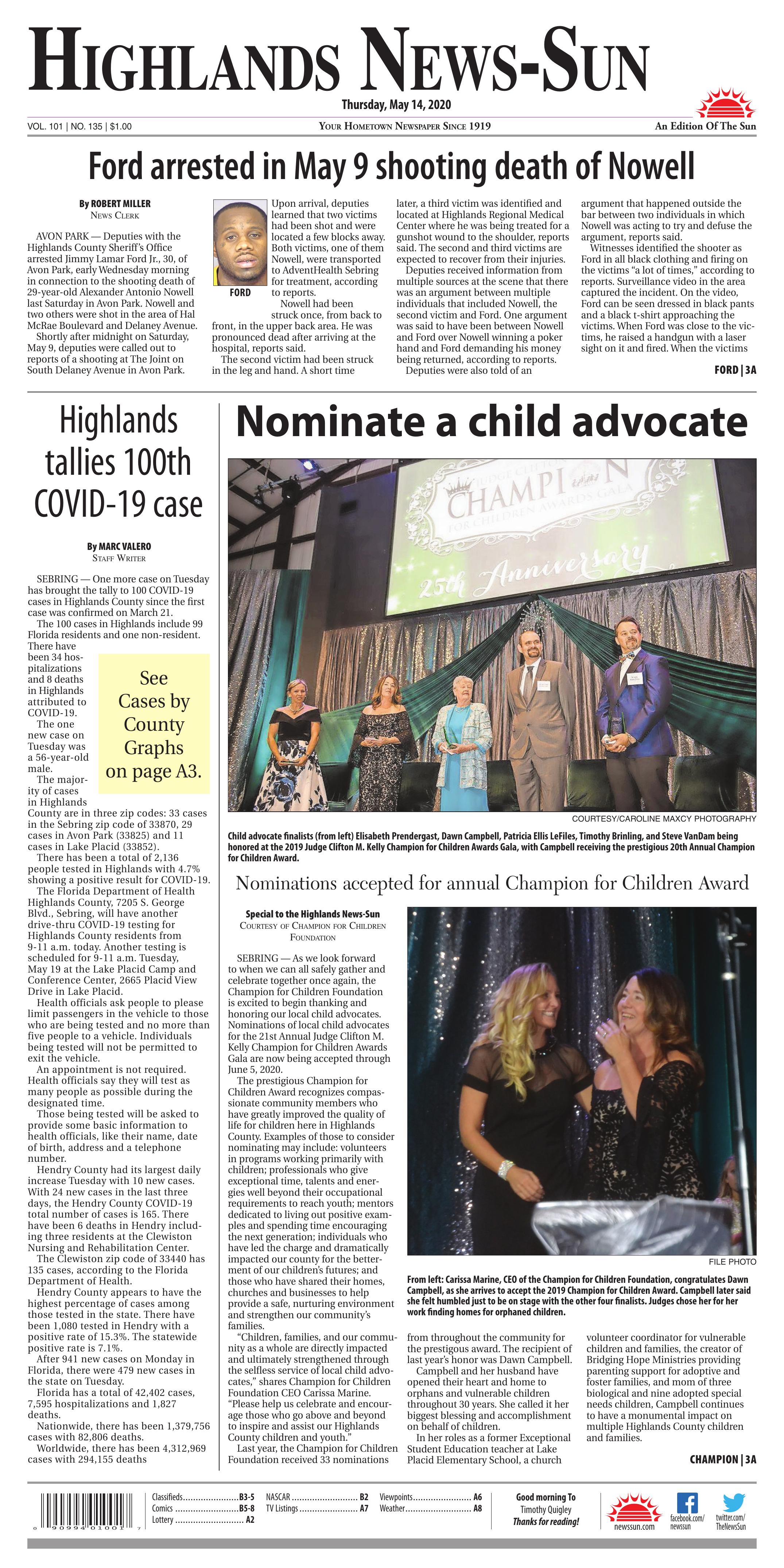